I’ve driven right by this Site more times than I can remember, going up to where my Grandson’s Dad has lived for quite a few years, trespassed on the edges, and now find it’s a new parcel of open space, under the stewardship an organization that oversees the largest number of properties/acreage in the area – and the director is interested in Indigenous Stone Features of the Cultural Sacred Landscape. 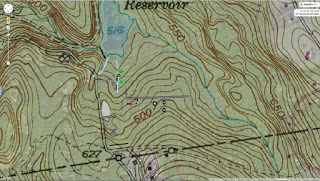 Rough site map.
So I’m learning this Site, getting it into my own cognitive map in my mind and trying to put it down in words, photos, drawings and on some actual maps – or at least into maps in some computer files since the cost of printer ink would break me...
The linear row/serpent turns to a zigzag row of stones/serpent as it heads into the rather stony riparian zone, a stonework border visible here and there on the western edge above a (possibly Indigenous-made) earth and stone causeway.  As I headed uphill, I observed numerous boulders with cobbles placed on them, came across a substantial row of stones, a circular mound of stones, a sort of "dot" row of stones (maybe just the high points of a debris buried less substantial row?), more gateways and more stone piles. I revisited a serpent {
This possible grinding slick was one interpretation of one of the "cobbles on boulders:" 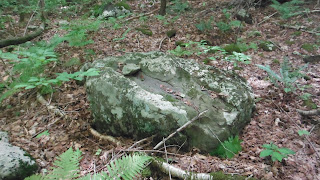 Posted by Tim MacSweeney at 9:08 AM