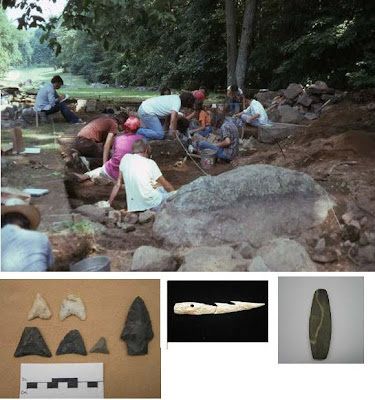 Dr. Banks will discuss the importance of fish to Native Americans in southern New England. Important fishing sites within the region and various fishing methods will be reviewed. The Indian Hill site is situated adjacent to a fall line in the Farmington River and provided indigenous groups an opportunity to exploit large quantities of anadromous fish each spring. The focus of the excavation was a Late Archaic occupation radiocarbon dated to 5000 years ago.

Future presentations at the LHSC: 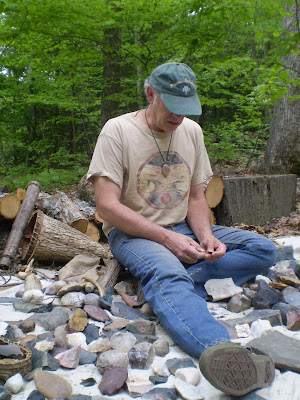 (my photo)
December 14: A rare lecture by Primitive Technologist Jeff Kalin, who will give a slide-illustrated presentation on “Talking Flakes”, and what they can reveal about Native American communities.
The Litchfield Hills Archaeology Club meets every second Sunday of the month at 3:00pm in the Research Building of the Institute for American Indian Studies, 38 Curtis Road, Washington, CT when they are not at their summer dig. For information or directions call (860) 868-0518 or visit the Institute's web site at birdstone.org.

The public is welcome. For nonmembers there is a $5 fee per lecture. 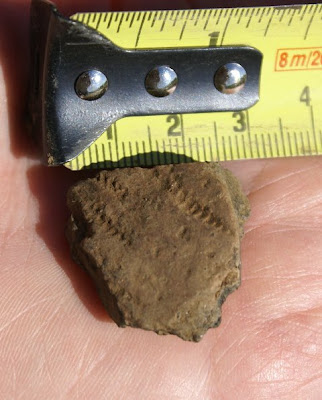 Oldest Pottery in the New England 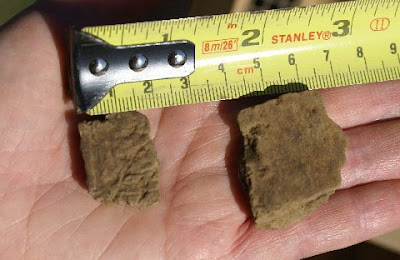 For those of you who have not been digging with us this summer, the Litchfield HIlls Archaeology Club unearthed a goodly number of artifacts from the Hopkins site overlooking Lake Waramaug this season. 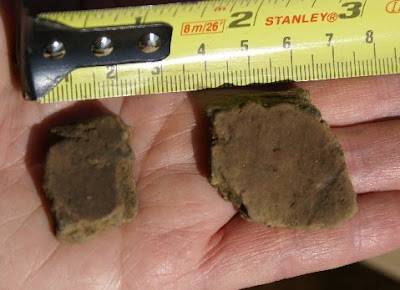 Besides the dentate stamped and rocker dentate stamped pottery, we also have Vinette Interior Cordmarked -- the oldest pottery in the New England (ca. 3800-1700 years old), Orient, broad spear, narrow stemmed, and a Brewerton notched point. These point types date from c. 5000-1500 years ago. Plus we recovered a number of other tool types, utilized flakes, and the ubiquitous flakes and shatter of stone tool making. Primitive Technologist Jeff Kalin will be telling us what we can learn from them at our December meeting! 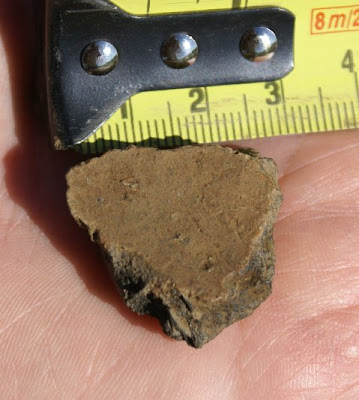 "HI. Just sending pics of the pottery found on Sunday. First two pics are front and back of the same pieces as are pics 3 & 4. It was great to discover the design on this piece. I believe Luci called it somethjng like Rocker Dentate. Please correct me if I am wrong."

That's really more than just two things, isn't it?
Posted by Tim MacSweeney at 5:33 AM No comments:

CHRISTOPHER COLUMBUS AND THE INDIANS

by Howard Zinn
[Howard Zinn is an author and lecturer. His most noted work, from which this selection is excerpted, is "A People's History of the United States.] 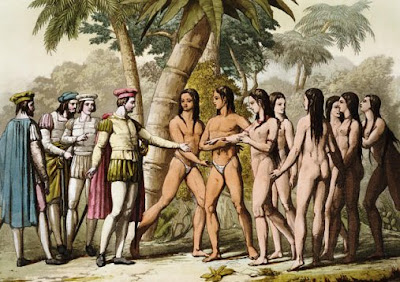 Arawak men and women, naked, tawny, and full of wonder, emerged from their villages onto the island's beaches and swam out to get a closer look at the strange big boat. When Columbus and his sailors came ashore, carrying swords, speaking oddly, the Arawaks ran to greet them, brought them food, water, gifts. He later wrote of this in his log:
"They... brought us parrots and balls of cotton and spears and many other things, which they exchanged for the glass beads and hawks' bells. They willingly traded everything they owned.... They were well-built, with good bodies and handsome features.... They do not bear arms, and do not know them, for I showed them a sword, they took it by the edge and cut themselves out of ignorance. They have no iron. Their spears are made of cane.... They would make fine servants.... With fifty men we could subjugate them all and make them do whatever we want."
These Arawaks of the Bahama Islands were much like Indians on the mainland, who were remarkable (European observers were to say again and again) for their hospitality, their belief in sharing. These traits did not stand out in the Europe of the Renaissance, dominated as it was by the religion of popes, the government of kings, the frenzy for money that marked Western civilization and its first messenger to the Americas, Christopher Columbus.
Columbus wrote:
"As soon as I arrived in the Indies, on the first Island which I found, I took some of the natives by force in order that they might learn and might give me information of whatever there is in these parts." The information that Columbus wanted most was: Where is the gold?

The Indians, Columbus reported, "are so naive and so free with their possessions that no one who has not witnessed them would believe it. When you ask for something they have, they never say no. To the contrary, they offer to share with anyone...." He concluded his report by asking for a little help from their Majesties, and in return he would bring them from his next voyage "as much gold as they need . . . and as many slaves as they ask." He was full of religious talk: "Thus the eternal God, our Lord, gives victory to those who follow His way over apparent impossibilities."
Because of Columbus's exaggerated report and promises, his second expedition was given seventeen ships and more than twelve hundred men. The aim was clear: slaves and gold. They went from island to island in the Caribbean, taking Indians as captives. But as word spread of the Europeans' intent they found more and more empty villages. On Haiti, they found that the sailors left behind at Fort Navidad had been killed in a battle with the Indians, after they had roamed the island in gangs looking for gold, taking women and children as slaves for sex and labor.
Now, from his base on Haiti, Columbus sent expedition after expedition into the interior. They found no gold fields, but had to fill up the ships returning to Spain with some kind of dividend. In the year 1495, they went on a great slave raid, rounded up fifteen hundred Arawak men, women, and children, put them in pens guarded by Spaniards and dogs, then picked the five hundred best specimens to load onto ships. Of those five hundred, two hundred died en route. The rest arrived alive in Spain and were put up for sale by the archdeacon of the town, who reported that, although the slaves were "naked as the day they were born," they showed "no more embarrassment than animals." Columbus later wrote: "Let us in the name of the Holy Trinity go on sending all the slaves that can be sold."
But too many of the slaves died in captivity. And so Columbus, desperate to pay back dividends to those who had invested, had to make good his promise to fill the ships with gold. In the province of Cicao on Haiti, where he and his men imagined huge gold fields to exist, they ordered all persons fourteen years or older to collect a certain quantity of gold every three months. When they brought it, they were given copper tokens to hang around their necks. Indians found without a copper token had their hands cut off and bled to death.
The Indians had been given an impossible task. The only gold around was bits of dust garnered from the streams. So they fled, were hunted down with dogs, and were killed. 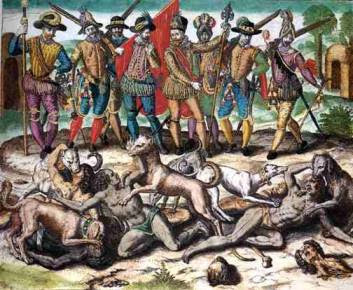 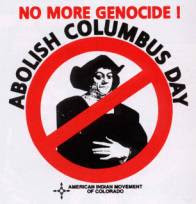 Images from: http://americanindiansource.com/columbusday.html
(after a long search and finding only the typical “nice” pictures…)
Posted by Tim MacSweeney at 6:24 AM 5 comments: 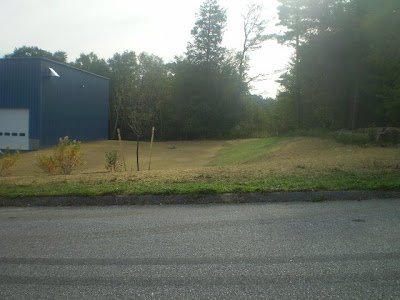 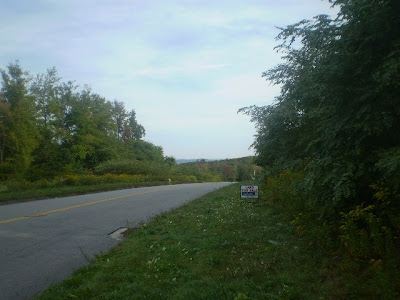 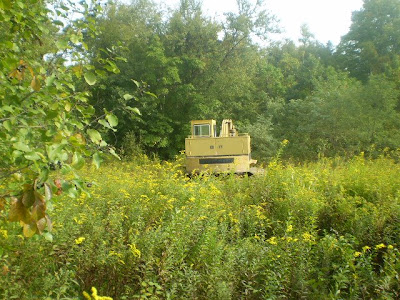 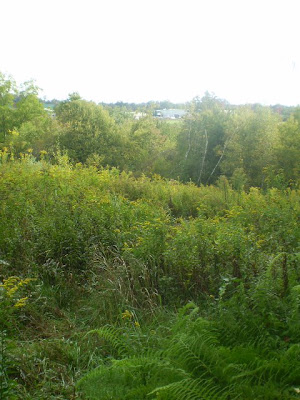 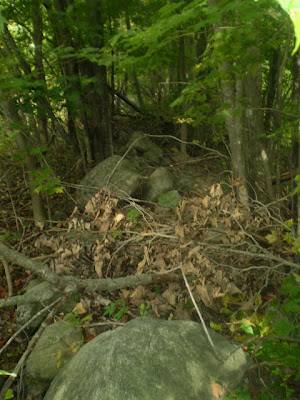 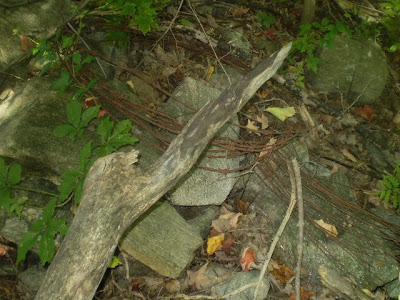 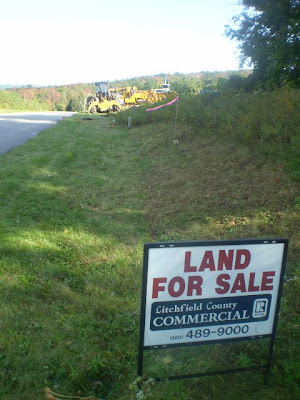 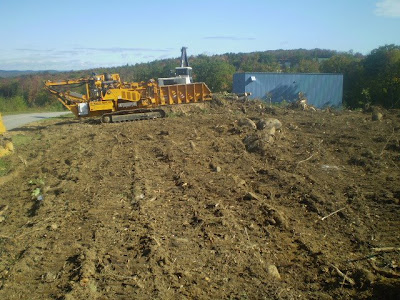 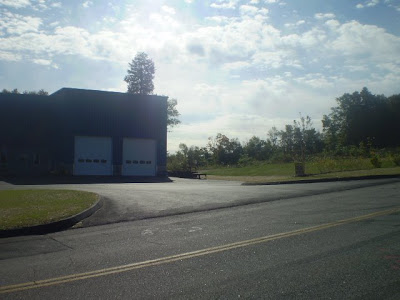 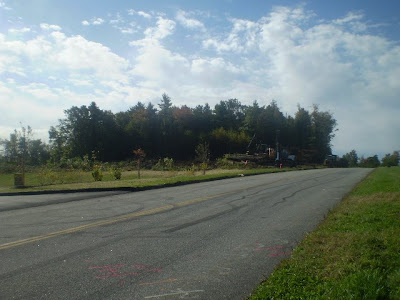 Posted by Tim MacSweeney at 5:13 AM No comments: