Posted by Tim MacSweeney at 12:12 PM No comments: 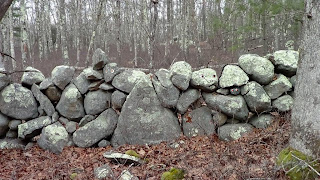 All rights reserved by badbadpotato

This morning, PWax reminded me to look at some photos on a Flickr Stream.
The one above was one of many that caught my eye - the Manitou shape (a lot like the "sugarloaf" shape of that chunk of Limestone from yesterday's post "Gitchie Manitou" here on Turtle Island).
And since it is somewhere on Turtle Island, I can't help but notice "the obvious turtle in the room/stone row."
Maybe that's a Bear's head, maybe that's a buzzard or some other bird as well and then I'm compelled to act on this compulsion to "doodle" on someone's perfectly good photograph...

There is no cure.

Posted by Tim MacSweeney at 10:03 AM No comments: 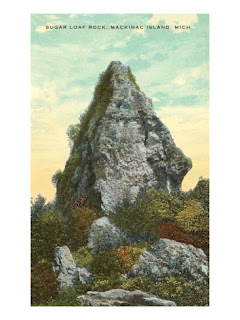 http://www.allposters.com/-sp/Sugar-Loaf-Rock-Mackinac-Island-Michigan-Posters_i8669133_.htm
Gitche Manitou (Gitchi Manitou, Kitchi Manitou, etc.) means "Great Spirit" in several Algonquian languages. The term was also utilized to signify God by Christian missionaries, when translating scriptures and prayers, etc. into the Algonquian languages.
Manitou is a common Algonquian term for spirit, mystery, or deity.
In more recent Anishinaabe culture, the Anishinaabe language word Gichi-manidoo means Great Spirit, the Creator of all things and the Giver of Life, and is sometimes translated as the "Great Mystery." Historically, Anishinaabe people believed in a variety of spirits, whose images were placed near doorways for protection.
According to Anishinaabe-Ojibwa tradition, what became known as Mackinac Island in Michigan was the home of Gitche Manitou. The people would make pilgrimages there for rituals devoted to the spirit… In addition to the Algonquian Anishinaabeg, many other tribes believed in Gitche Manitou. References to the Great Manitou by the Cheyenne and the Oglala Sioux (notably in the recollections of Black Elk), indicate that belief in this deity extended into the Great Plains, fully across the wider group of Algonquian peoples. {http://en.wikipedia.org/wiki/Gitche_Manitou} 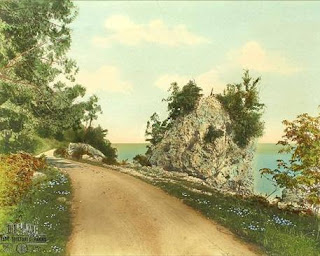 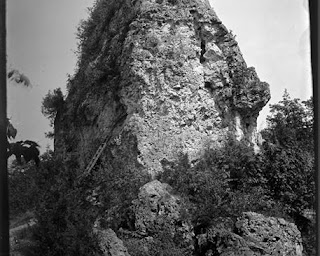 (No explaination of ladder given)
http://www.mackinacparks.com/photo-gallery/index.aspx?l=0,1,19,329

Sugar Loaf: Sugar Loaf is a dramatic breccia formation that rises 75 feet above the ground and is the largest of Mackinac Island’s many limestone stacks.  Centuries ago, Lake Algonquin covered all but the center of Mackinac Island, leaving only Sugar Loaf protruding from the water.  When the water receded, the rock formation remained standing as a tower of rock.  Ojibwe legend says that Sugar Loaf was the dwelling of the Great Creator or Great Spirit Gitchie Manitou. 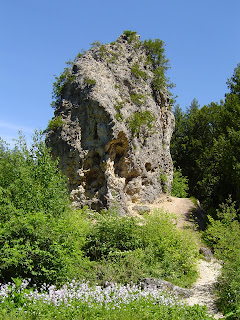 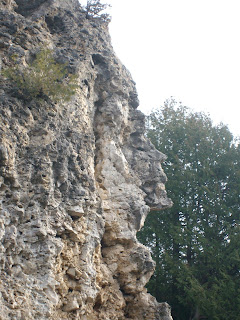 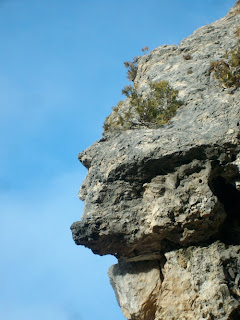 Posted by Tim MacSweeney at 11:04 AM No comments: 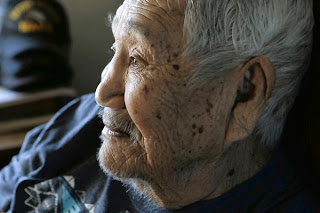 ( Robert Gauthier, Los Angeles Times / January 17, 2013 )
Archie Thompson, pictured in January 2013, was the last of about 20 Yurok elders who helped revitalize the Yurok language over the last few decades, after academics in the 1990s predicted it would be extinct by 2010. Thompson died March 26 at age 93.

By Lee Romney, Los Angeles Times
"Archie Thompson, the oldest living member of California's Yurok tribe and the last known active speaker raised in the tribal language, has died. He was 93..."
http://www.latimes.com/news/obituaries/la-me-archie-thompson-20130407,0,1929379.story
I ain't no geneologist or no geneologist's son, but there's a high degree of probability that he might have been related to Lucy Thompson:
http://wakinguponturtleisland.blogspot.com/2010/09/ms-lucy-says.html
Posted by Tim MacSweeney at 8:30 AM 1 comment:

I have a new folder in my Turtle Island photos: "Dogs on Mounds."
I think these dogs are amateurs: 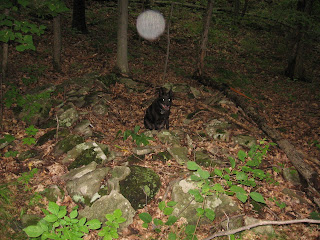 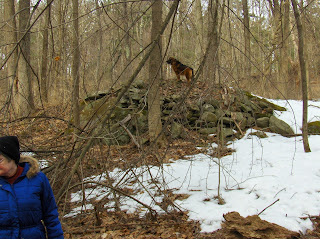 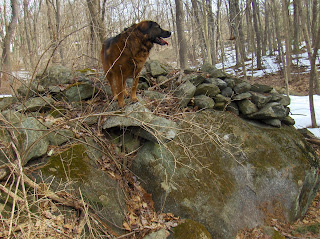 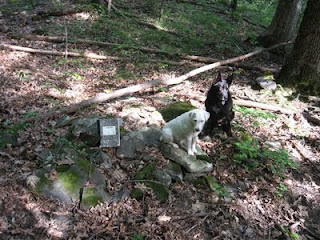 
"Initially used in police work,  forensic dogs were noted to alert on old cemeteries.  So the Institute of Canine Forensics, formed in 1997, began training working breeds—herding and hunting dogs—to locate ancient remains.
Just How accurate are the dogs?   Extremely accurate, according to their handlers—who provide some impressive examples.
“On an archaeological site in Vacaville in June, the dogs identified burials that were 3,000 years old,” Grebenkemper said."

http://www.eastcountymagazine.org/node/10446
In archaeology, an HHRD trained canine with impeccable manners, slow and methodical search style, properly trained and certified, may be the Remote Sensing Tool of the future. ICF canine trainers are "writing the book" in this field. Certification standards are high insuring that the ICF certified canines are reliable, non-invasive tools to be used in modern archaeology.
http://www.k9forensic.org/historical.html


The Law:
The Native American Graves Protection and Repatriation Act (NAGPRA), Pub. L. 101-601, 25 U.S.C. 3001 et seq., 104 Stat. 3048, is a United States federal law enacted on 16 November 1990. NAGPRA makes it a criminal offense to traffic in Native American human remains without right of possession or in Native American cultural items obtained in violation of the Act. Penalties for a first offense may reach 12 months imprisonment and a $100,000 fine.
http://en.wikipedia.org/wiki/Native_American_Graves_Protection_and_Repatriation_Act


The Other More Deadly Consequences of Disturbing Burials:

"When the state announced in the early 1980s that Route 55 - "the Road to Nowhere" - would finally be finished, a Nanticoke Leni-Lenape Indian chief warned that doing so would disturb the 8,000-year-old graves of his ancestors buried along the Almonesson Creek.
Sachem Wayandaga, an Indian chief and medicine man for the tribe, warned that if the burial ground were desecrated, "some very unusual things may occur at the site."
Some people just laughed....almost as soon as excavation began in March 1983, a bizarre series of accidents, injuries and illnesses befell people connected with the project. Most of the incidents involved the crew that worked for the John Rouse Construction Co.
The evening after the project began, the parents of one of the asphalt pavers were killed in a car accident. The brother and father of an office worker at the site died the same weekend.
John J. Cheli, owner of the excavation company that had cleared the land, died soon afterward, when his Corvette skidded off an icy road in Vineland.
No one at the site could figure out how crew member Leroy Starling ended up dead beneath the roller of an asphalt machine, or why a fierce gust of wind came up out of nowhere and knocked another worker off an overpass, paralyzing him.
Then there were the five crew members who narrowly escaped death when their van blew up and burst into flames as they rode from one section of the project to another.
Karl Kruger, who had been the Department of Transportation's site-engineering supervisor, confirmed the incidents. Kruger, who died several years ago, was a no-nonsense guy who claimed not to believe in ghosts or curses. He did say, however, that in the 25 years he had worked construction, he had never seen such an "unbelievable" amount of injury and loss on a job site.
An inspector working next to Kruger collapsed and died on the job after suffering a brain aneurysm. Other workers or members of their families were diagnosed with fast-moving cancers and other serious illnesses.
Some blamed the "curse" that supposedly occurred when the Indian burial grounds were unearthed. But Wayandaga insisted that no such curse existed and that the (multiple) tragedies were simply a result of disturbing the ancient graves..."
http://articles.philly.com/2005-05-18/news/25439434_1_icy-road-indian-burial-curse
Posted by Tim MacSweeney at 10:19 AM 2 comments:

depends, mostly, on what you are looking for.
Who is looking "Where" for "What?" 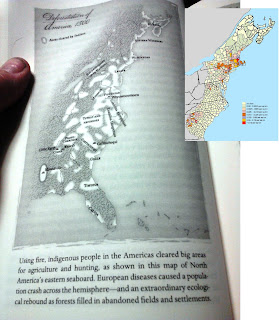 Map from "1493" by Charles Mann, inset from Curtiss Hoffman:
http://rockpiles.blogspot.com/2013/04/update-hoffman-lecture-on-site.html

Mangled quote from John Lubbock, who actually is quoted as saying:
"What we see depends mainly on what we look for."
http://wakinguponturtleisland.blogspot.com/2010/11/john-lubbock.html
And the Turtles we see depends on the ones we look for (I said that):
http://wakinguponturtleisland.blogspot.com/2011/09/what-turtles-we-see-depends-mainly-on.html

Lubbock also said:
"Earth and sky, woods and fields, lakes and rivers, the mountain and the sea, are excellent schoolmasters, and teach some of us more than we can ever learn from books."

Posted by Tim MacSweeney at 11:25 AM No comments:

Smoke in the Distance

Out in the distance, on the other side of the river from New Amsterdam on Manhattan Island, smoke rises. I can only assume it’s an Indian fire. Odd lines, much like stone walls, I can only assume, are barely visible. Perhaps they are fire breaks made of stone… 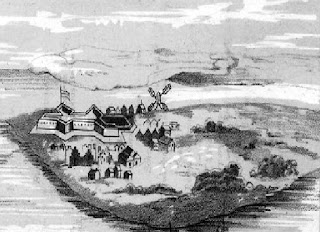 Patches of forest and some open plains? Are there any other early drawings that show something like this? 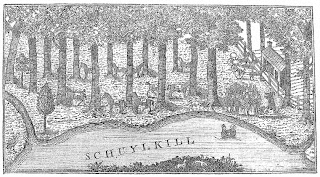 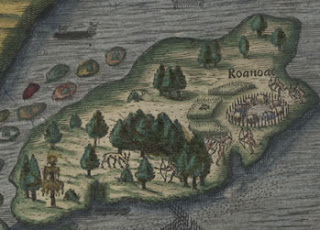 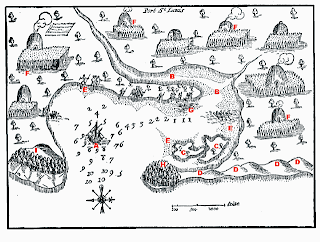 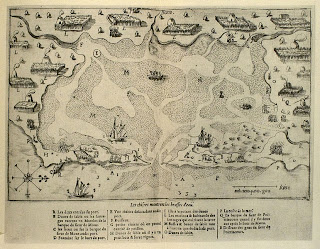 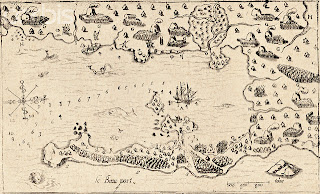 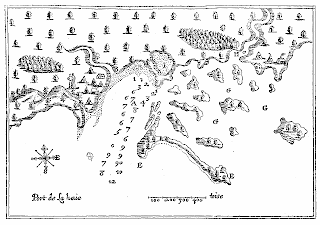 And here's some early Vermonters not building stone but brush fences: 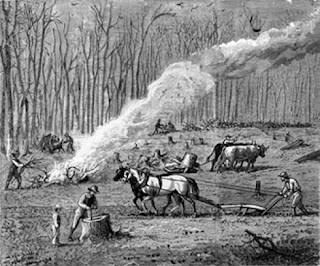 Posted by Tim MacSweeney at 12:14 PM No comments: