Of course this nomination for the most rock piles in a photo competion (see: rockpiles ) should be placed in the “other people’s photos category.”

And whoever took these photos might be dead and thus unable to attend the ceremonies, as well as collect the big winnings, however imaginary both may actually be.

It's from a 1934 Aerial survey of Connecticut and in particular The Photo known as 07599 deserves a good look at.

This photo series was captured back in the days when there were more cows living here than people, which was also about the time that small tractors were just becoming available to small farmers – or farmers of any size for that matter.

So this is just on the edge of the days of earth (and stone) moving machinery, perhaps a bulldozed State Highway or two, but the photo shows many a place where these stone rows were left alone for a long time. You can zoom in on stones now missing, see how things looked in 1934.

I’m most familiar with photograph 07599 and you may click click on that to zoom in and time travel back to the year my mom was born. 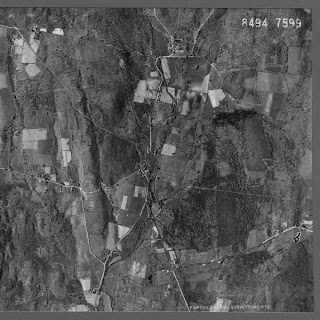 I venture into other frames, but many of my photos were taken in this area - from soon to be 20 years of following the stone rows that appear as both straight and squiggly lines in frame 07599. Many of the water features are visibly bordered by stone rows and within these boundaries are rock piles and other structures.

Not to mention zigzag rows bordering both sides of the oldest of roads, a reversal of the road first and the “stone wall” second theory about roadside stones. Are these Indian trails?

Not to mention that in many places the construction method of the stone wall sometimes appears as a series of circles, or rock piles, suggesting that perhaps these Native American Stone Rows themselves are sort of elongated rock piles.

All of them, of course…
Posted by Tim MacSweeney at 6:27 AM No comments: