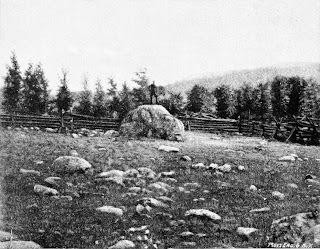 http://en.wikisource.org/wiki/Page:Popular_Science_Monthly_Volume_49.djvu/180
FIG. 10.—ANCIENT BOWLDER PAVEMENT OF ALGONQUIN BEACH, whose crest rises one hundred and eighty-seven feet above Georgian Bay, upon the northeast side of Blue Mountains of Collingwood, Ontario. 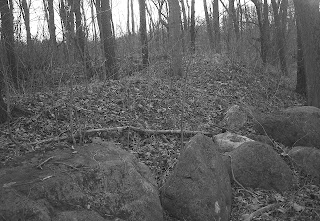 from a Malicious Source
"Along the stone wall of the enclosure is a series of sacred stones, indicated by the white stone that has a bowl carved in the top. There is no other site like this, but the stone bowl indicates that it too, was constructed by the mound builders culture."


Posted by Tim MacSweeney at 7:40 AM No comments:


Please note that the URL for the photo I refer to often has changed to:
Aerial survey of Connecticut 1934 photograph 07599
http://cslib.cdmhost.com/cdm/singleitem/collection/p4005coll10/id/6508/rec/1 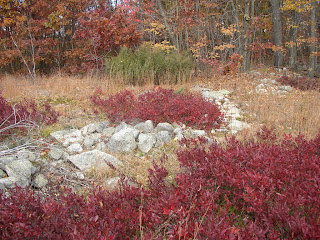 Twenty years or so later, it always seems to come back to those Zigzag Stone Rows. Of course if you count the very first stone row I wondered about, thinking why someone made an incredible number of “stone walls” in a lightning bolt shape, it would be between forty or fifty years ago.

Eric Sloane was the first source I ever came across that made a simple explanation of Zigzag stone “walls” in New England. He tells us that they were sort of accidently made stone fences, composed of stones from field clearing that were thrown at the base of a wooden “Snake Fence” or “Worm Fence,” a post less early wooden rail fence that was easily constructed. Sloane wrote about that in the 1950’s and everyone who has ever written a stone wall book or is considered an authority on such matters repeats that explanation. 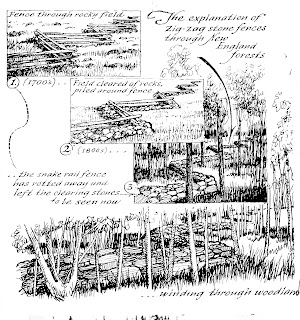 I’ve been looking for a long, long time now for at least one zigzag stone row that fits this description. I haven’t found it yet. It’s something I’ve never seen.

I’ve looked for evidence in old paintings in hope of finding at least one zigzag stone row that fits the standard myth about these “walls.” 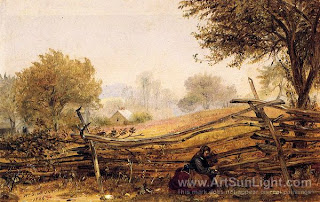 The only thing that even comes close is the “piling of field clearing stones up against the already carefully made zigzag stone row.”

I was reading about prescribed burns the other day when I came across a “How to Guide” sort of thing that mentioned establishing a firebreak that’s at least eight feet wide. Then I thought about all the roads I drive along that are bounded by what we’ve been brought up to think of as those famous New England Stone Walls as I commute to work. It struck me then that these roads, some former Indian Trails still called by their Native American names, would make pretty good fire breaks. 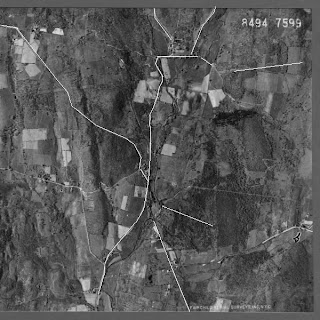 Many of the water features you can see in the old photo show that they too are sometimes bounded by double stone rows. Over the past 20 years, I’ve found that almost all the smaller water features that you can’t easily see are, more often than not, bounded in stone, more often than not zigzag rows. These would make good fire breaks as well – and as a bonus there would still be a green living canopy shading the water, a resource riparian zone that was perhaps burned on a different schedule.

These zigzag stone rows are said to be rare:
http://wakinguponturtleisland.blogspot.com/2011/02/abundance-of-rareties.html

A video of one such zigzag stone row:
http://wakinguponturtleisland.blogspot.com/2011/05/zig-zag-row-by-stream.html

I contend that the famous stone walls of New England (and beyond) are older than they are thought to be, their colonial and later origin a myth rather than the truth:

Posted by Tim MacSweeney at 7:27 AM No comments: 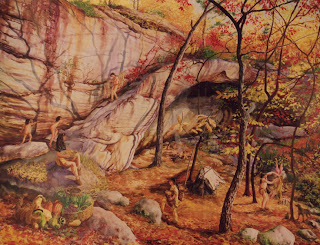 Overview: This episode examines landmark research into the Kentucky’s first forest managers. Archaeologist Cecil Ison takes viewers to a spectacular site known as Cliff Palace Pond at Kenner Point Knob in Daniel Boone National Forest. Excavations of a rockshelter and soil cores from a nearby pond reveal that American Indians have been using fire to manage the forests for over 3,000 years. This scientific research is being applied to contemporary fire management practices of the USDA Forest Service throughout Kentucky.

The video begins with a description of controlled or “pre-scribed” burns by fire managers in Daniel Boone National Forest. Jerry Wolfe, an elder of the Eastern Band of Cherokee, explains how American Indians have used fire to nurture the health and “fruits” of the forest during the historic era. Yet, until the 1990s, scientists didn’t know that American Indians have been managing the Eastern Woodland forests for over 3,000 years.

Archaeologists visit the Cliff Palace Pond site to document traces of ancient American Indian life, including an ancient petroglyph (geometric design) and stairs carved into a rocky path to the Keener Point Knob plateau. Cecil Ison explains how sediments in a rare upland pond serve as a time capsule, recording over 10,000 years of environmental data. Paleoecologist Paul Delcourt, University of Tennessee-Knoxville, describes how the combined analysis of both archaeological data and pond sediments provide insights into how American Indians used fire to manage their environment for over 3,000 years. The video concludes with discussions about the importance of fire in the forests and how researching the past can inform the present and help us plan for the future. 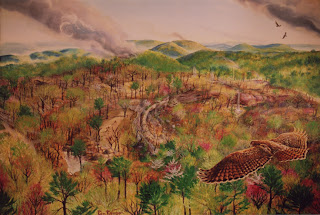 Posted by Tim MacSweeney at 10:07 AM No comments: