I came across this in a search:

http://archrecord.construction.com/news/daily/archives/070614endangered.asp
Posted by Tim MacSweeney at 8:41 AM No comments: 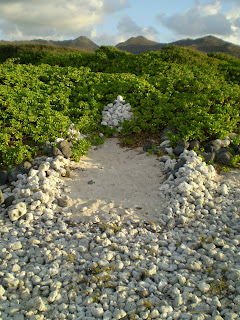 Here's a pile at Sandy Beach on Oahu.

Could be a fishing shrine, could be a spot someone was sleeping at, or almost anything.
Down at this beach there were many little shrines to people lost at sea. Further down the road was a famous Japanese Fishing Shrine I never took a photo of, but lots of other people did, creating a traffic hazard, very close to the spot they filmed that "Kissing in the Rolling Surf" scene in from the movie "Here to Eternity"...

A bartender at The Crouching Lion (a rock formation that looks like a crouching lion in a place that has no lions, crouching or in any other position) likes to balance rocks down at the shore across the highway from the restaraunt.
The rainbows arrived at the same time we did... 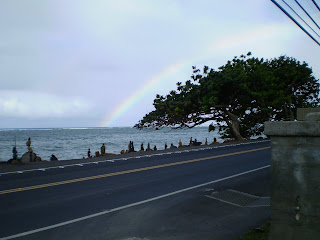 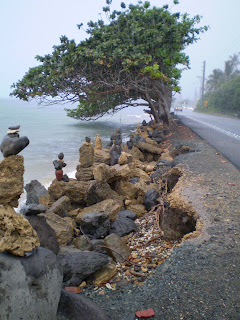 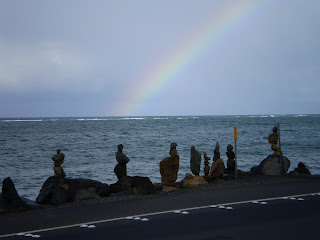 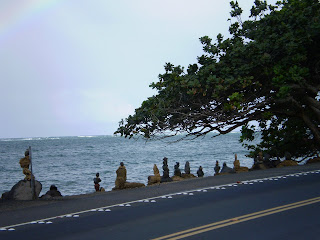 Posted by Tim MacSweeney at 9:48 AM 2 comments:

Last of the Wiamea Falls Photos 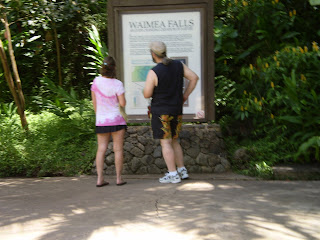 Okay: here's the Waimea Falls (including a couple fuzzy ones - and not including the one of the baby pigs eating Hawaiian Apples that I took as a tourist woman cried out "Wart Hogs!!") 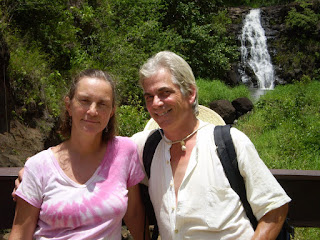 When I swam out to the Falls, so did this young man, who was very informative about how many people died falling off the rocks, were stripped of their flesh in minutes by the red ants, as well as how the shrimp that live in the pool were just "ordinary poisonous crayfish."
He later offered to play a game of roll the wooden disc thru the wooden stakes at the rock bordered game court... 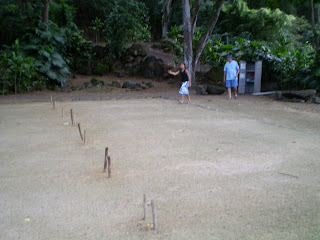 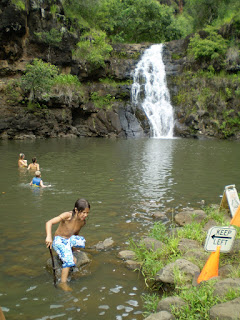 Posted by Tim MacSweeney at 9:22 AM No comments: 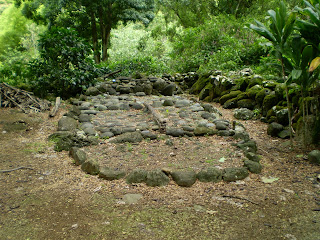 Stone outline of an ancient "hawaiian hale" or traditional house...

"Historic hale to be rebuilt the old way"
By Pat Gee pgee@starbulletin.com
"Daniel "Pomaika'i" Kaniaupio-Crozier took apart a grass shack, or hale, at Bishop Museum and is now rebuilding it from scratch. But he must now find or grow the original materials, and then copy the methods of construction used by his ancestors.
The 105-year-old replica of a grass house, or hale pili, will continue to be the centerpiece of the museum's Hawaiian Hall. The hall and nearby buildings are undergoing a $20 million renovation, to be completed in late 2008..." 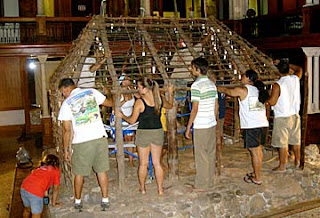 As in: "Eleu aku la no ua wahi elemakule nei a ka pa holoholona a laua. " 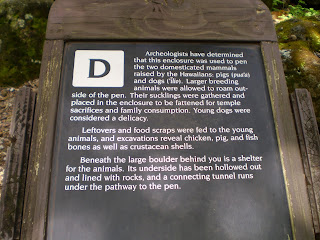 Posted by Tim MacSweeney at 8:59 AM No comments: 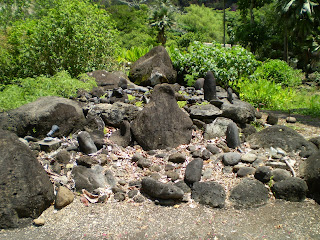 A re-creation or model, but it sounds familiar - and looks familiar too. Anyone who frequents "Rock Piles" might comment about what looks alot like a Manitou Stone in the center of the pile.

"Some pohaku were known as ko'a (fishing shrines), having been used to locate special fishing grounds. A ku'ula was a smaller stone said to hold a spirit that helped the fisherman. The ku'ula was said to speak to the fisherman in his dreams, directing him to finding the location of the stone itself, and then if well cared for the fisherman would then be rewarded with good fishing and a heathy life. Jagged or pourous stones were considered female, smooth finer grained stones, male. Usually dark stones were male, lighter were female..."
http://www.paulwaters.com/kapuhist.htm 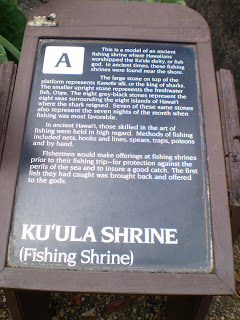 Posted by Tim MacSweeney at 8:35 AM No comments: 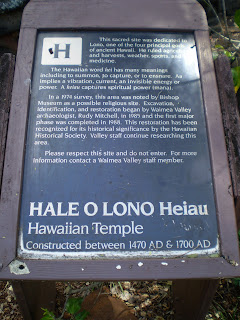 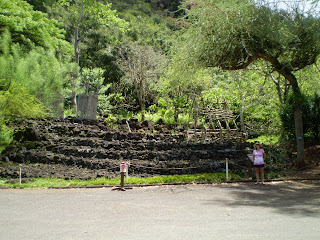 Posted by Tim MacSweeney at 6:56 AM No comments:

A place I really liked - Falls and all the rest (sort of like home, really). 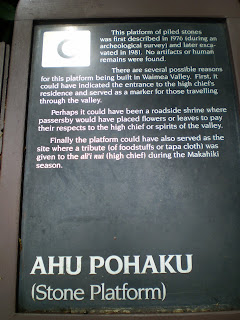 "Waimea Valley is a cultural resource of the highest possible order ... There is no place quite like Waimea Valley on the island of Oahu, and very few places in the entire archipelago can equal it in terms of its religious associations, its preservation, or its potential for answering many questions about traditional Hawaii. It is deserving of the utmost care and protection, and this can be achieved only through recognition and careful planning." - Joseph Kennedy of Archaeological Consultants of the Pacific

http://www.oha.org/index.php?option=com_content&task=view&amp;id=180&Itemid=225
Posted by Tim MacSweeney at 11:10 AM No comments:

I intended to find "The Wizard Stones of Kapaemahu at Waikiki" but I never did. They are sort of similar to a Lenni Lenape legend that has to do with the Pleiades or Seven Special Stars that I wrote about on this blog a little while back.

Here's someone's travel photo picture of it I found online at: 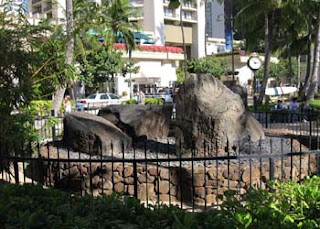 Instead, by accident, I ended up here one day, a modern burial mound:

"Na Iwi Kupuna - Waikiki Memorial"
by Betty Santos
"Early in the year 2000, about 50 sets of human bones were disturbed during excavation work in Waikiki. Following months of discussion by interested parties, including descendants of the families that once lived in the area, the City Council approved the construction of a burial mound as a memorial..." 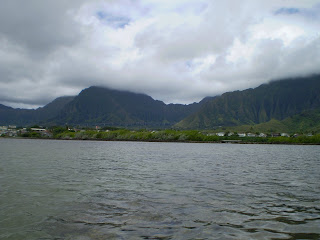 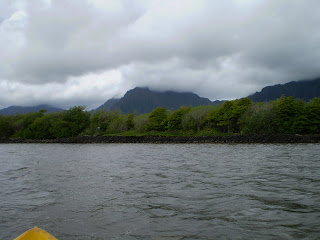 These are a couple more pictures of the fish pond at Heeia.

"Fishponds were very abundant in prehistoric Hawai'i. Many fishponds are known to have been on the islands of Hawai'i, Maui, Lana'i, Moloka'i, O'ahu, and Kaua'i. Only in Hawai'i was there such an intensive effort to utilize practically every body of water, from seashore to upland forests, as a source of food, for either agriculture or aquaculture (Apple & Kikuchi, 1975).
The general term for a fishpond is loko (pond), or more specifically, loko i'a (fishpond). Loko i'a were used for the fattening and storing of fish for food and also as a source for kapu (forbidden) fish. A fish was kapu to the Hawaiians during its spawning season to allow a variety of fish to reproduce. Although the chief or commoners were unable to catch fish in the sea at specific time spans, they were available in the fishponds because fishponds were considered a part of the land. Also, ocean fishing was dependent upon conditions of weather and surf. When there were storms and high surf, fish was always still available from the fishpond (Summers, 1964).

He'eia Fishpond is a seashore pond (loko kuapa). Loko kuapa were fishponds made by building a wall of stone on a reef that would result in the enclosure of a water body (Henry, 1993). The length of He'eia fishpond wall is about 5,000 feet, one of the longest walls of any fishpond on O'ahu. The wall also encircles the entire 88 acres of the pond, which is unusual. Over the years, the completely walled pond became elevated above the general level of its surroundings. As a result, it was necessary to mend all breaks in the wall and seal all leaks as they occurred, so that the proper water level could be maintained inside the pond. If not, the water would drain out (Kelly, 1975)..."

And here's one more original photo - the ancient "loko kuapa" at low tide, houses behind it, and in the distance ( if you click on the picture) is a traffic jam on Hawaii State Highway 61, just before the tunnel through the "pali" where King Kamehameha drove an army of opposing warriors off the mountainside ( http://en.wikipedia.org/wiki/Pali_Lookout).
My wife and I were stuck on top some of "fifty two varieties of coral," rather than in traffic... 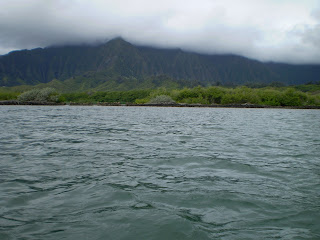 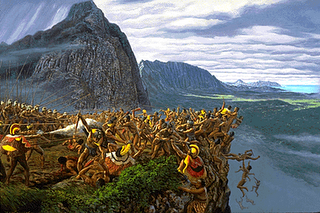 Posted by Tim MacSweeney at 9:37 AM No comments:

Waking Up On Another Turtle Island 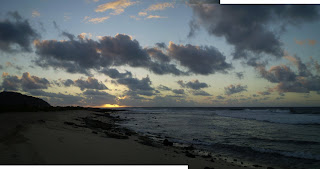 Waking Up and looking East at Sandy Beach at the edge of Hawai'i Kai on Oahu 6AM in July 2007...

This is a guy named Fred who works at Heeia Stae Park.
http://search.volunteerhawaii.org/org/1384591.html
http://www.friendsofheeia.com/
http://ksdl.ksbe.edu/heeia/ and a million more if you google the various words and phrases, check out the Images etc.


We rented kayaks from him.
I started talking turtles and rocks with him

Like me, people often tell him "That's just a rock."
Fred's totem tatoo: 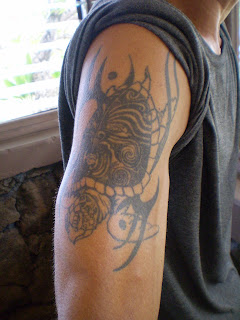 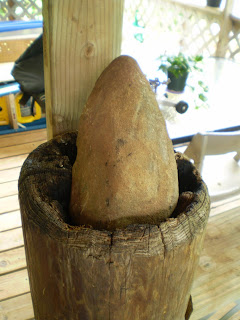 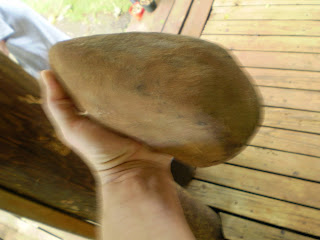 Since I'm always finding these sorts of "just a rock(s)," I had to pick up this "just a rock."

Fred said he'd had it "checked out." It's an unfinished handaxe...

The other might be a net sinker or a head knocker or both... 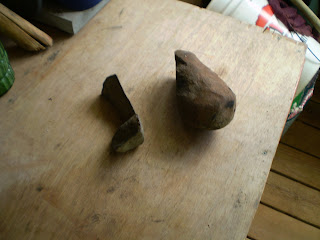 Just to the right of the entrance is an ancient fish pond, perhaps 600 years old, maybe more...

These are just my photo's; like I wrote above, there's lots more out there... 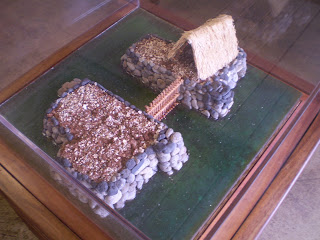 Posted by Tim MacSweeney at 11:58 AM No comments: