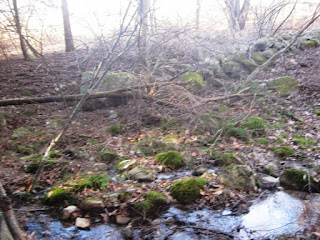 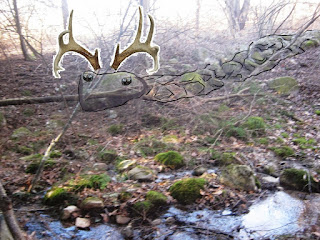 (The small stream is bordered by a low serpentine row of stones on this side,
a high row of stones built into the terrace on the other-side...)
Yellow Arrow indicates location and direction of view: 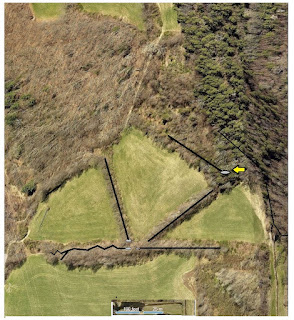 Serpent Petroforms illustrated in the inaccurate lay-over above:

Snakes, "End Stones," and Some Re-thinking:

https://wakinguponturtleisland.blogspot.com/2009/09/snakes-end-stones-and-some-re-thinking.html
Posted by Tim MacSweeney at 9:49 AM No comments: 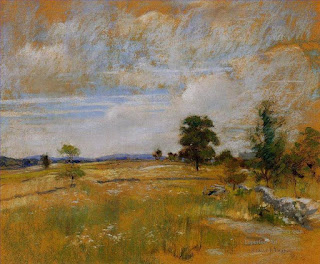 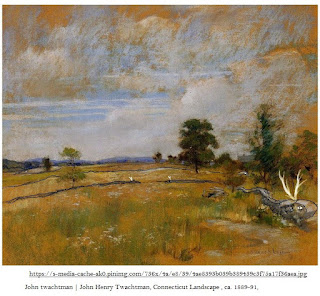 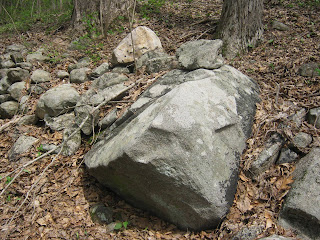 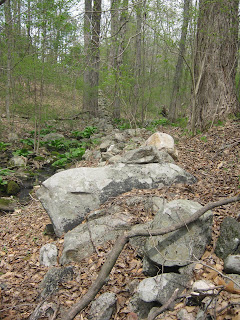 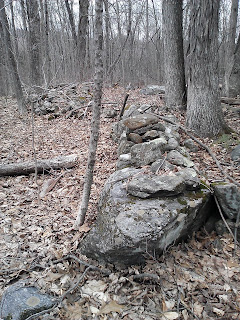 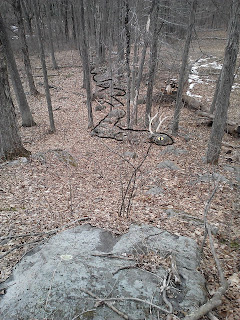 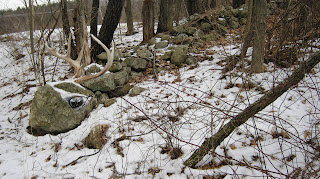 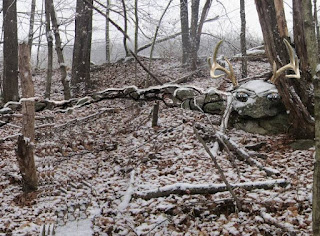 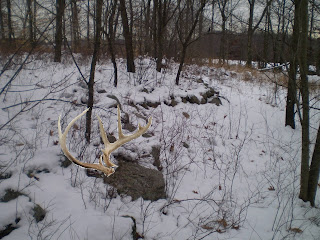 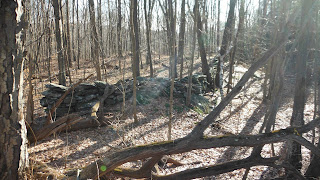 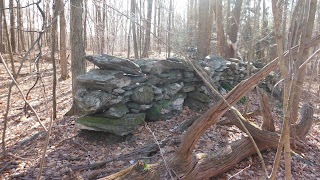 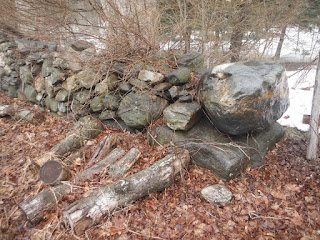 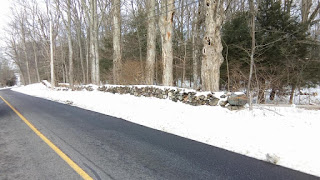 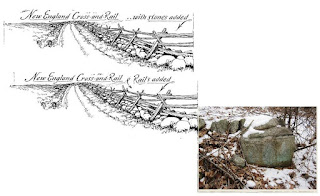 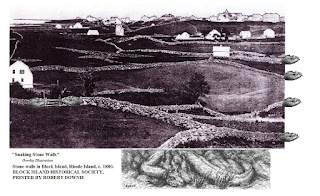 Posted by Tim MacSweeney at 3:19 PM No comments:

Stones of the Makiawisug, or Little People of the Woodlands (Mohegan)

"At the Mohegan Retirement Community, for example, arched openings in the base of the tall stone walls that mark the Fort Hill Farm fields (Photograph 35) were made by 19th-century Mohegan stoneworkers to allow the Little People to pass (E. Thomas, personal communication). " 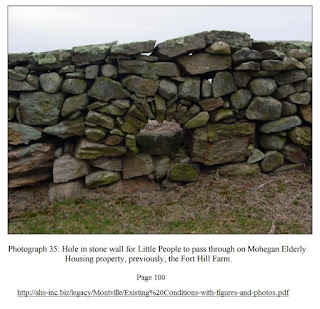 "The Connecticut State Register of Historic Places criteria were also applied to potentially eligible resources; the three state criteria are identical to National Register criteria A, C and D. The quality of significance in American history, architecture, archaeology, engineering, and culture is present in districts, sites, buildings, structures, and objects that possess integrity of location, design, setting, materials, workmanship, feeling, and association, and: A. Association with events that have made a significant contribution to the broad patterns of our history; B. Association with the lives of persons significant in our past; C. Distinctive design or physical characteristics, including representation of a significant entity whose individual components may lack distinction; D. Demonstrated ability or potential to yield important information about prehistory or history. In addition to meeting at least one of the National Register eligibility criteria, eligible resources must possess several of the seven aspects of integrity: location, design, setting, materials, workmanship, feeling and association. National Register-eligible TCPs must meet National Register criteria and also be supported by a combination of historical and ethnographic data, and oral tradition carried by the population to whom a TCP is significant.

Now, the Mohegans again live on the reacquired farm, in the Mohegan Retirement Community building immediately south of the APE, which was built on the former Fort Hill Farm property because of the “protective spiritual energy” the Mohegans believe to emanate from Mohegan Hill (Quinn 2012).
(page 6)
As defined by the Mohegans, the cultural components of the district are more than the geography, stone formations, waterways, structures or remains of structures. They were all connected by a web-like network of paths across Mohegan Hill, a number of which survive (an example is at the base of Proposed Action parcel in an old path through Fort Hill Farm, now the Mohegan Retirement Community) (Fawcett 2000: 10-11). For the Mohegans, the natural and cultural components of the landscape have deep spiritual and religious meaning and attachment. The tribe believes that the rocky, wooded landscape is home to the Makiawisug, or Little People of the Woodlands, who live deep in the wooded grounds of Mohegan Hill and protect the Mohegans from harm. Mohegans make regular offerings to the Little People, who are rarely seen, and accommodate them in other ways. At the Mohegan Retirement Community, for example, arched openings in the base of the tall stone walls that mark the Fort Hill Farm fields (Photograph 35) were made by 19th-century Mohegan stoneworkers to allow the Little People to pass (E. Thomas, personal communication). The tribe believes that the stone piles documented by HPI on Fort Hill in the Proposed Action parcel are sacred because they were created and are guarded by the Little People, and they have the power to protect Mohegans from outsiders. Fort Hill, as part of Mohegan Hill, is also believed by the Mohegans to be protected by the spirit of Uncas, who the Mohegans believe lives “among the sacred stone piles and trees on the Hill” (Quinn 2012), and who causes rocks to be thrown down on people who would harm the tribe (Speck 1928: 254; Fawcett 1995: 537). To ensure his continued protection, tribal members still make offerings to Uncas at Uncas’s Spring, across Route 32 from Fort Hill. The spirit of the “Mohegan Stone Cutter,” believed to be the noted Mohegan stoneworker Henry Mathews, also protects the Hill, according to tribal tradition. The Mohegans believe that “protective energies” reside in and emanate from Mohegan Hill. The stones used to construct Uncas’s Fort on Fort Hill were “taken from Mohegan Hill because of the protective energies that emanate from that location.” When the Mohegan Church was built, its foundation was constructed with “sacred stones” from the proposed development area on Fort Hill, in order to imbue it with the Hill’s “protective energies” (Quinn 2012). “Mohegan people used stone from Fort Hill because they believed in its protective powers and connection to Uncas whose spirit still lives and protects the Hill” (E. Thomas, personal communication). Other stone landscape features on Mohegan Hill have long been and continue to be important in Mohegan cultural traditions, including Moshup’s Rock near the Mohegan Church; Papoose Ledge, Red Rock, and Uncas’s Chair near the Thames River; and Uncas’s Rockshelter at the base of Fort Hill adjacent to the Proposed Action area. On the east side of Fort Hill along Route 32 on the side of Parcel B, was a rock on which pictographs were made by the Little People, according to Fidelia Fielding, the last fluent Mohegan speaker, but it was destroyed “by roadmakers” in the early 20th century (Speck 1909: 201). -7-
a)      Rocks/Stone Piles/Rock Features The natural features of Mohegan Hill, particularly the stones and wooded areas, have great spiritual and sacred significance to the Tribe and are closely tied to their identity and sense of self. In Mohegan tradition, Mohegans are inseparable from the natural rocks on the Hill. The late Medicine Woman Gladys Tantaquidgeon learned from her elders (nanus), and passed down to current Medicine Woman Melissa Tantaquidegon-Zobel, the understanding that “In the Mohegan language, the spirit of rocks is acknowledged in the names for our leaders: a male leader is called sachem (which means rock man) and a woman leader is referred to as a sunqsquaw (which translates as rock woman)” (Fawcett 2000: 21). To the Mohegans, “[t]he tales of the elders are as old as the rocks on Mohegan Hill. Those rocks are the bones of Mother Earth. Streaked with quartz crystal veins, they contain hidden messages that guide generation after generation of those who listen well” (Fawcett 2000: 21). Pages 10 & 11
b)      b) Stone Piles and the Little People The stone piles on Mohegan Hill, including those identified in the Proposed Action area by HPI (Figure 4; Photographs 1-7), are considered “sacred stone piles” and “a critical feature of the traditional landscape of Mohegan Hill” (Quinn 2012). The piles are “sentinels” and are “a testament to the sacredness of the Hill” (Thomas, personal communication). The piles “were created by the ‘Little People’ who live deep within the ground of Mohegan Hill” (Quinn 2012). The Little People themselves are actually from stone: Medicine Woman Melissa TantaquidgeonZobel explains that they “are hard and bulky and born of stone” (Fawcett 2000: 31). The Mohegans believe that the Little People “still live within the ground on the Hill and continue to guard the stones” and that “the stones are protective because they come from Mohegan Hill” (Quinn 2012). Contemporary Mohegan tribal members continue to make offerings to the Little People in hopes that they will continue to protect the tribe (Fawcett 1995: 58).
c)      c) Other Natural and Cultural Features of the Mohegan Hill District Frank Speck recorded (and mapped, see Figure 12) several springs on Mohegan Hill as important to the Mohegans: “At several localities in the heart of the Mohegan settlement springs...
http://ahs-inc.biz/legacy/Montville/Existing%20Conditions-with-figures-and-photos.pdf

I was reading yet another article about New England’s Stone walls: 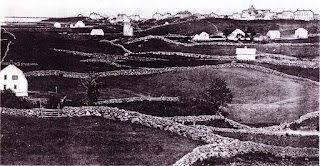 “WALK INTO A PATCH OF forest in New England, and chances are you will—almost literally—stumble across a stone wall. Thigh-high, perhaps, it is cobbled together with stones of various shapes and sizes, with splotches of lichen and spongy moss instead of mortar. Most of the stones are what are called “two-handers”—light enough to lift, but not with just one hand. The wall winds down a hill and out of sight. According to Robert Thorson, a landscape geologist at University of Connecticut, these walls are “damn near everywhere” in the forests of rural New England. He estimates that there are more than 100,000 miles of old, disused stone walls out there, or enough to circle the globe four times.”
The author of the article pauses and asks “Who would build a stone wall, let alone hundreds of thousands of miles of them, in the middle of the forest?”
And then there follows a bunch of the usual stuff, about Colonial farms and pastures and then Post-Colonial farms and pastures and finally abandoned farms and pastures. 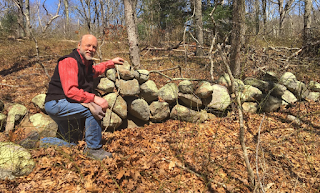 I’m disappointed to find that the photo above isn’t the place described here:
“Every year he takes his students to a maple-beech forest stand in Storrs, Connecticut, which he calls “The Glen,” to look at a classic farmstead stone wall. This wall is thigh-high, and mostly built of gneiss and schist, metamorphic rocks common in the valley flanks of central New England. With Thorson’s help, one begins to see a little structure in how the stones were stacked—in messy tiers, by a farmer who added one load at a time.”
With a little cut and paste help, I can, in this photo, begin to show the “structure in how the stones were stacked” – “tiers” that resemble the head and body of a snake, by an Indigenous “farmer’ of another kind at some unknown point in time in that other 97% of the time humans inhabited this corner of Turtle Island: 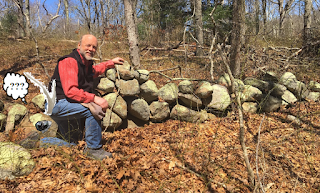 And here I find I agree with Thorson:
“Stone walls are the most important artifacts in rural New England,” Thorson says. “They’re a visceral connection to the past. They are just as surely a remnant of a former civilization as a ruin in the Amazon rain forest.”
Especially if those stone walls begin with a Snake Head, in a place where for thousands of years Indigenous Peoples used fire to shape a Cultural Landscape, a Ceremonial Stone Landscape... 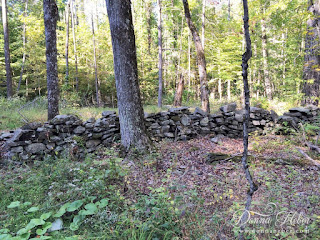 "Stone walls, property lines dating all the way back to the 18th century, can be found snaking through these woods..."  http://www.donnaheber.com/2014/09/ 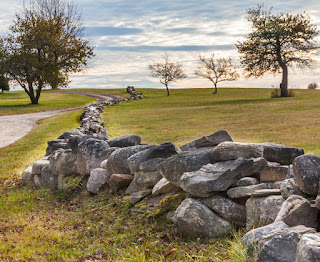 Used at: https://sidewalkbabble.com/2017/04/22/urban-archaeology-vancouvers-ancient-tree-stumps-with-faces-new-englands-stone-walls-tell-stories/
Posted by Tim MacSweeney at 11:10 AM No comments: