Ulun'suti, "the jewel," on the head of the Great Snake (Antares)

“This is a serpent effigy - and the serpent effigies are quite often in dispute because the presumption is that they are stone walls. Most often, they are too low to pen anything in, but we identify them by other means. Usually they do have a head, such as the one you see here. This particular one, just behind the head, also has a space and an orange stone, because we believe that they are related to the serpent effigy that is in the area of Scorpius that the Cherokee referred to as the Uktena, that is, a serpent with an orange stone. In its terra form, it’s (it has) a jewel and it is horned, but this is, as below, so above...” 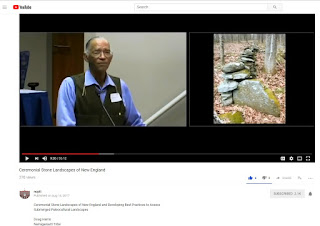 The complete text and video can be seen here at the National Park Service website:

This presentation was part of the Proceedings of the Maritime Cultural Landscape Symposium, October 14-15, 2015, University of Wisconsin-Madison.

Note: DH is likening the Orange stone (as below/in the stone "wall") to the orange colored bright star Antares that is the Jewel on the head of the Great Serpent constellation (as above in the sky), part of what Europeans came to call Scorpius. 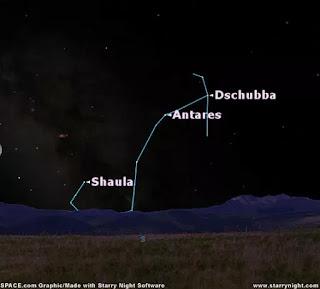 "Those who know say the Uktena is a great snake, as large around as a tree trunk, with horns on its head, and a bright blazing crest like a diamond on its forehead, and scales glowing like sparks of fire. It has rings or spots of color along its whole length, and can not be wounded except by shooting in the seventh spot from the head, because under this spot are its heart and its life. The blazing diamond is called Ulun'suti—"Transparent"—and he who can win it may become the greatest wonder worker of the tribe. But it is worth a man's life to attempt it, for whoever is seen by the Uktena is so dazed by the bright light that he runs toward the snake instead of trying to escape. As if this were not enough, the breath of the Uktena is so pestilential, that no living creature can survive should they inhale the tiniest bit of the foul air expelled by the Uktena. Even to see the Uktena asleep is death, not to the hunter himself, but to his family." - James Mooney Myths of the Cherokee 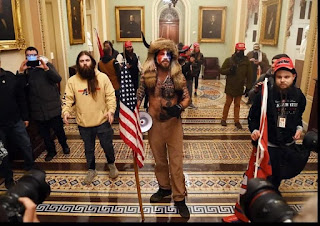 “…The comical looking douchebag in the center of this group of losers has covered himself with Norse iconography – the valknut on his chest, a massive Thor's hammer pointed towards the tiny sore-hammer in his pants, and others including a Sonnenrad (used as the central icon on the tiled floor of SS headquarters' "generals' hall") on his left shoulder. His faux-Native American headdress links into assertions made by some of these groups that North America was the homeland of Aryan/White tribal ("folk/volk") groups, coast-to-coast, until it was overrun by Native Americans just a few centuries before Columbus; and therefore the post-medieval colonization and conquest of North America by Europeans is argued by them to be a justified "retaking" of Aryan lands while their anger against "political correctness" is their assertion of privilege to "restore" the Americas to these presumed Aryan roots. Many of these groups refer to all of North America as "Vinland", misappropriating the Norse sagas' discussions of limited, short-term exploration in a small part of the coastal far Northeast and using the fake Kensington Runestone, the Heavener runes, and "mooring holes" across the Plains as their evidence that Viking long-ships once sailed across the grasslands and up across the Rocky Mountains. As absurd as all of this bullshit is, the images of this asshole and his kind make it clear why supposedly "sober" discussions of Kensington, Spirit Pond, and other fakes' supposed authenticity are not necessarily naive or innocent explorations, but are often either implicitly racist at base or feed into racist, violent, and insurrectionist mythologies with real-world implications.

This flag, the so-called Vinland flag, designed by a Goth Metal band, has been appropriated by quite a few alt-Right, White Supremacist groups with an Aryan-nativist ideology and should be regarded with the same suspicion accorded a Confederate battle flag or Nazi flag seen out of context: 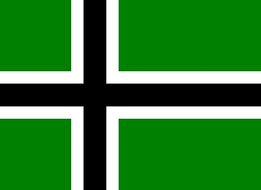 I first saw it on the Face Book profiles of some people from Oregon who wanted to join this group. Digging deeper into one of their profiles revealed a clear linkage through prison gangs and “liked” books on insurrection, manuals on how to identify and kill “race-enemies”, militia warfare manuals, etc

Lest we assume that White Supremacist iconography misappropriated from the past is only linked to Norse symbolism, the Celtic Cross has been adopted as one of the most ubiquitous white supremacist symbols. When reproduced in red and black, the colors most heavily used by the Nazi regime, or in green/white/black (the “Vinland” colors) one should be immediately concerned because a conscious decisi on was made to use that specific symbol with those specific colors. 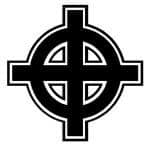 Unfortunately, I have had to learn more about this than I would have liked to know...both from looking into the profiles of people who want to join this group and from hosting three small Viking themed events more than 10 years ago with researchers and re-enactors at my museum. The first two were peaceful but two weeks before the third one I was notified by law enforcement and the Anti-Defamation League that Stormfront and other neo-Nazi groups were planning to attend, march, and possibly take over the event. I had to spend two weeks monitoring hate speech, reading posts I never wanted to see, learning coded phrases to understand what was being said, and adding undercover and armed security to the event. We suspected that one of the groups participating in the event must have had at least one member who wore white sheets when not being a Viking, since these were small, local events promoted before FB and social media and the posts on Stormfront included details that would not have been easily known to anyone but the participants.

For those interested in being aware, this is a good database of hate-group symbols (hand signals, tattoos, flags, and more) – not all of which are Norse or Celtic, but you will find some familiar emblems that have been misappropriated among them, and might want to be aware whenever you see them:"

I (Tim MacSweeney) will add that this "douchebag" has been identified as Jacob Anthony Angeli Chansley aka "Jake Angeli" and "The Qanon Shaman."

"Neo-Völkisch adherents base their spirituality on the survival of those descended from white Europeans and the preservation of what they claim are dead or dying cultures. Such individuals and groups use a variety of terms to describe their spirituality such as Odinism or Wotanism, and Odalism, but sometimes they co-opt other non-racist denominations such as heathenism, Ásatrú or even paganism. Qualifiers like “Norse tradition,” “Germanic” or “proto-Germanic” are sometimes attached to those terms..."

"Jake Angeli (born Jacob Anthony Angeli Chansley; circa 1988),[1] better known as the "QAnon Shaman" or "Q Shaman", is an American conspiracy theorist and far-right activist, best known to international public for his participation in the 2021 storming of the United States Capitol. He is both a Trump supporter and supporter of the unfounded QAnon conspiracy theory.[2][3]

Angeli is currently posted as a person of interest with the Washington DC Police.[4]

Angeli is also known for supporting Donald Trump[5][6][7], and for his social media following, attending rallies supporting QAnon mostly in and around Phoenix, Arizona.[8]

During the 2021 storming of the United States Capitol, he entered the United States Senate floor in the Capitol, wearing his self-styled symbolic shamanic attire, including a buffalo-horned coyote skin headdress and war paint in red, white, and blue. Angeli later said of the storming of the Capitol building "The fact that we had a bunch of our traitors in office hunker down, put on their gas masks and retreat into their underground bunker, I consider that a win." He claimed that police had initially blocked the crowd from entry, but had then specifically allowed them entry, at which point he entered.[9]

Tattoos: He has several tattoos, including a Valknut, a Yggdrasil, and a Mjölnir.[10][11] Prior to his political activity, Angeli worked as an actor and voice over artist.[12] He has stated that he wears the "Shaman" outfit, consisting of animal skins and horns, to specifically draw attention to himself, so he can tell people about Q and QAnon.[13]

Rumors: On the day after the Capitol attack, Jay Kay, the lead singer of Jamiroquai, released a short video letting his fans know that it wasn't him, and that he wasn't associated with the protest, stating "It wasn't my crowd".[14][15] Angeli was dubbed "Pseudo Jamiroquai" or just "Jamiroquai" by some social media users and the media, and "Jamiroquai" started trending on social media search platforms, along with memes pointing out the visual similarity.[16][17]

Baseless rumours circulated that Angeli was associated with Antifa and had infiltrated the event as a fifth columnist.[18]

There was speculation that he colluded with Nancy Pelosi's son in law, Michiel Vos, seen in a photo with him outside the US Capitol. Snopes pointed out that Vos is a reporter with RTL, and the image is from a story on the protests which Vos wrote for RTL Boulevard.[19]

Posted by Tim MacSweeney at 9:46 AM No comments: