Posted by Tim MacSweeney at 10:45 AM No comments:

Posted by Tim MacSweeney at 8:50 AM No comments:

Crisis on the Schaghticoke Reservation 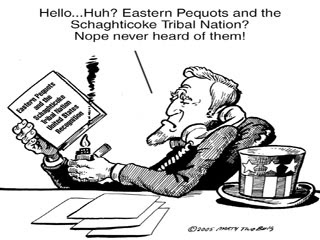 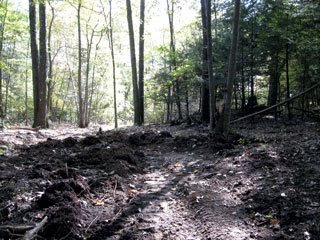 Posted by Tim MacSweeney at 9:28 AM 2 comments: 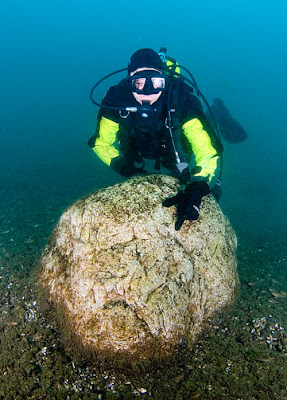 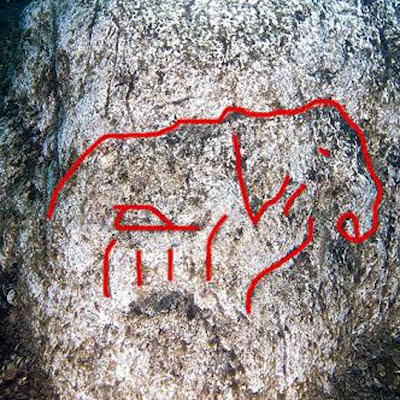 “It was part of a row of stones of varying sizes that might have marked the shoreline 6,000 to 10,000 years ago, Holley said. Some -- although not the boulder -- were arranged in a circle. That could indicate human manipulation although it's unclear, said Rob Houston, a geology instructor at the college who has inspected the site. The boulder with the markings is 3.5 to 4 feet high and about 5 feet long. Photos show a surface with numerous fissures. Some may be natural while others appear of human origin, but those forming what could be the petroglyph stood out, Holley said.
http://www.record-eagle.com/local/local_story_248101751.html/resources_printstory
http://dsc.discovery.com/news/2007/09/05/mastadon_arc.html?category=archaeology&guid=20070905101500
When mastodons ruled northern Michigan:
http://www.wzzm13.com/news/news_article.aspx?storyid=80355
Rare Find in GT Bay from IPR News Radio
(2007-08-13) John Bailey explains why an ancient rock carving in Grand Traverse Bay could bolster his view of the origins of Native Americans living in the Great Lakes:
http://www.publicbroadcasting.net/wiaa/news.newsmain?action=article&ARTICLE_ID=1129504 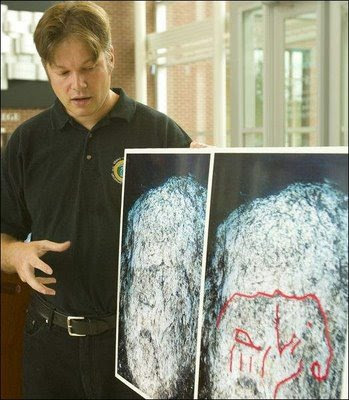 From another blog: “This would of course be very cool if true. I previously posted here and here and here on possible Pleistocene rock art and how rare it appears to be…” http://stephenbodio.blogspot.com/search?q=%22Mastodon+petroglyph
Posted by Tim MacSweeney at 8:39 AM No comments:

At 2:30 PM on Jan. 29, 2009, a Press Conference was held on the (cold) North Steps of The Capitol Building in Hartford CT. The videos look shaky because I was shivering, but the words spoken came through loud and clear...

Tribal members also posted a petition at petitiononline.com, which they intended to present to Gov. Jodi Rell after the rally, as arranged at 3pm.

The petition calls on the governor "to investigate and order an immediate halt to the hate crimes, destruction, desecration of sacred lands and encroachment" that continues despite the tribe's requests for help.

Gov. Rell left the building sometime between 2:30 and 3pm.

From Tierra del Fuego to Ungava Bay
The history of betrayal continues to today
The spirit of Almighty Voice, the ghost of Anna Mae
Call like thunder from the mountains -- you can hear them say
It's a stolen land...

Apartheid in Arizona, slaughter in Brazil
If bullets don't get good PR there's other ways to kill
Kidnap all the children, put 'em in a foreign system
Bring them up in no-man's land where no one really wants them
It's a stolen land...

In my mind I catch a picture -- big black raven in the sky
Looking at the ocean -- sail reflected in black eye --
Sail as white as heroin, white like weathered bones --
Rum and guns and smallpox gonna change the face of home
In this stolen land...

If you're like me you'd like to think we've learned from our mistakes
Enough to know we can't play god with others' lives at stake
So now we've all discovered the world wasn't only made for whites
What step are you gonna take to try and set things right?
In this stolen land...

Posted by Tim MacSweeney at 7:45 AM 2 comments: