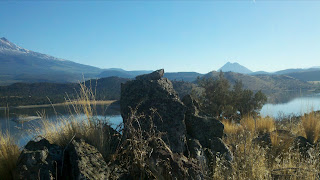 Another Alyssa Alexandria photo from Northern California.
Posted by Tim MacSweeney at 8:37 AM 1 comment: 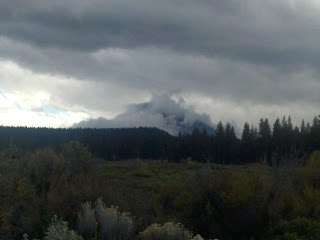 "Black Butte during storms-- perhaps the reason The Pyramid Site is pointed to it, rather than Mount Shasta. This happens in every storm-- there's something about the magnetics of the place which draws the water molecules down to it." - Alyssa Alexandria She continues: "The pyramid stone is enclosed in a triangular wall on a conical tipped hill. It "sights" directly to Black Butte, a volcanic cinder cone. I leave the interpretation up to you." 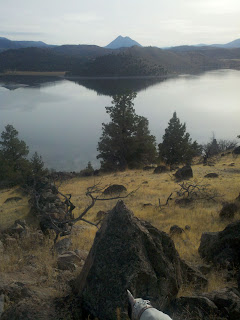 Posted by Tim MacSweeney at 4:39 AM No comments:

I woke up thinking about the differences between Shastina and Nonnewaug, after two or three weeks of thinking about the similarities (Shastina – little Shasta? Like my Grandmother Rose, whose real name it turned out was Rosina, little Rose in Italian on her birth certificate. What is the real name of Shastina?).


I just called the place I’ve been thinking about, so much I feel like I’ve been there, “Shastina” as in Lake Shastina, not even a lake until the 1930s. It is a name that isn’t even an Indian name. It is Indian based, Shasta an anglicized version of one of many Indian names for Mount Shasta, but Nonnewaug is different, the old Native American place-name for a ‘fishing place,’ possibly “in the middle” of, and this is just a guess, the floodplain fields.

Shastina (the area, I mean, having no other name to call it right now) is a place with Mountains All Around it – or at least dominated by views of one of the most beautiful mountains on Turtle Island, Mount Shasta. Nonnewaug is a floodplain valley surrounded by hills. There is no Big Mountain. 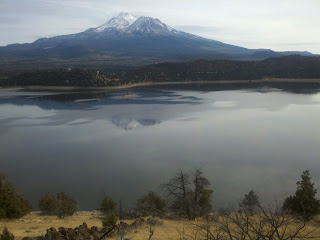 Alyssa Alexandria photo of Mount Shasta
http://www.relicsoftheancients.com/images/Shasta%20Valley/Lake%20Shastina%20Area/Alyssa%20Alexandria/Lake%20Shastina/055.jpg
There may be camps up in Shastina, places where people stayed while making use of the places there, oak groves, patches of prairie, and all that was lost when beavers were trapped and trees were cut down, when the burning was stopped and the cows and sheep came in, changing the ancient places, places with names. Nonnewaug was a village site, the Nonnewaug Wigwams at the end, but it was probably well known and well used, revisited, the waterfall making it a special place. It may have ended up a village site because the Falls was a special place of Spiritual Power, the music of the water, perhaps the Great Manitou’s Tears in that time of epidemics and the Pequot Massacre. Some say just a tenth of the population survived and perhaps the power of the Falls drew the survivors here.

And there’s the evidence on the landscape of glacial lake shores. What was the ancient name of that lake, still a fishing place but what other descriptive pieces were there to that word?

The stone rows here are a smaller web, defining and connecting smaller sections of land, many more springs and streams. The trees have grown back in here, a wounded forest where there once were groves of ancient trees, like on the hill above me to the west. The same devastation by the trapping and the tree cutting, trampled as well by sheep and dairy cattle browsing for food. That happened here much longer ago, the second half of the 1600’s, the early part of the 1700’s, Shastina in the 1850’s. 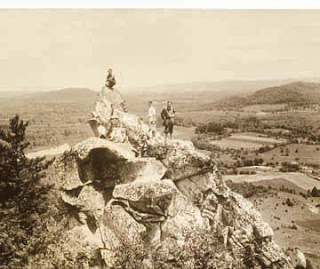 https://thetrustees.org/content/monument-mountain-history/
There are special high places here along the Housatonic River, some close by and not-so-high, some at a greater distance - but what’s a great distance when the Great Spirit moves you? If I followed the Great River into where the Berkshire Mountains begin, I could and would (and have) stopped at Monument Mountain, the Giant’s Stone Pile below it on the east side, massive boulders covering a Giant whose name I don’t know. Somewhere on the west side is a stone pile I’ve never visited, but that I’ve heard and read has been visited in the past by a group of Native people who live in (Brotherton?) Wisconsin now and back track their own trail of tears to visit a monument to the ancestors left behind when these Christianized People slowly migrated along a route marked by Moravian Missionaries, towns named Bethlehem and Brotherton in what became states as the western frontier pushed farther and farther westward. 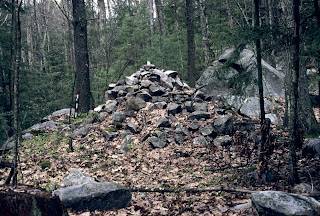 The wounded and untended forest grew back here as the little farms began to vanish and the manufacturing migrated elsewhere. The beavers, decimated in Connecticut they say by 1500, once gone are returning, getting back to their jobs of creating ponds and, I like to think, restoring the richness of the landscape, packing mud into the fallen trees they make their dams with, just like that beaver in the Creation Story plopped down some mud on the back of the Great Turtle – when all the world was water – and created the soil of Turtle Island, the tree, perhaps a Great Oak – civilization around the world was tied to the presence of acorns as food – sprouting from it, giving birth to the first man and woman of the Turtle Clan, sprouting from root and branch tip of that tree…

Below: one of the first photos of what I call Turtle One, taken on 35mm film in June of 1997. This box turtle petroform was the first of all the other turtles and turtle forms I have found since. I respectfully disagree with the professionals who have looked at it and determined it was not enhanced by human hands or placed  as I believe it had been originally had when it was created. I don’t know the name of the person who created the petroform, but I know the name of this turtle is “Grandfather Turtle.” I heard about it from Trudie Richmond first, at a Pow wow where and when she told it from the circle of her heart  by the stone circle where the fire burned in the center of that circle inside the larger circle of tents, surrounded by the circle of the sky in the circle of the solar system inside the circle of the universe. 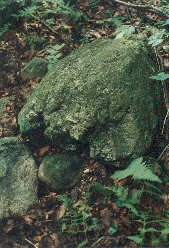 Take a walk around it: 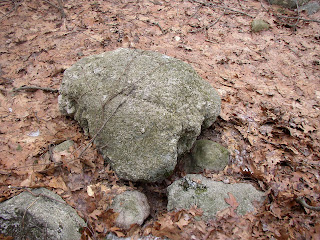 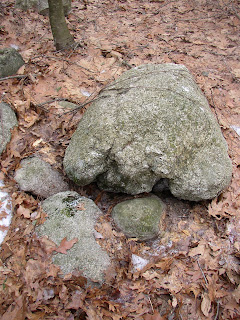 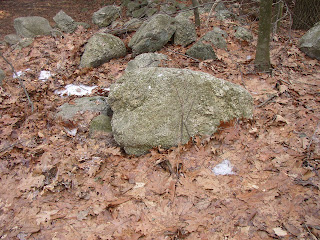 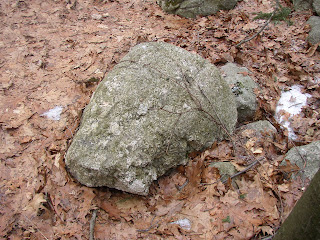 I'll "doodle" a Turtle Vision for you: 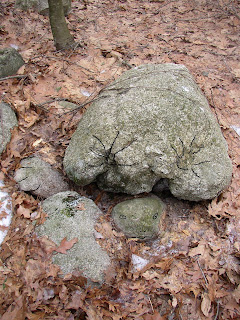 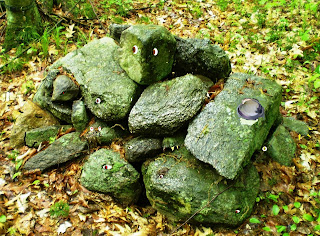 (Above: "Doodled" Mound; below: Original Mound with nearby Dog Tag and Collar) 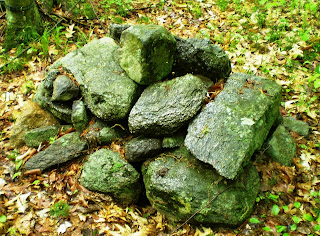 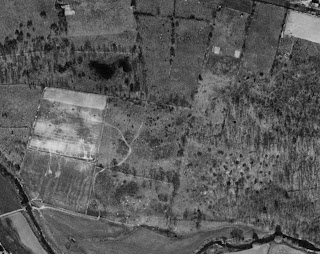 PW, King O’ The Rock Piles, spots some probable “field clearing stones,” and some old photos confirm it (I think).
The last couple “mounds” (  http://wakinguponturtleisland.blogspot.com/2012/02/beyond-big-stone-leap-year-day-rock.html ) don’t appear on the 1934 shot, but do in 1965. Click on the photo below to enlarge and you will see the places the photos from the post from Leap Day 2012; the rectangle at the bottom of the photo is the Big Stone that called me here and I followed a counter clockwise circle along the zigzag row from there. The larger circle is about where the Ceremonial native-made Mounds are located. The sharp edged smaller rectangle is that big pile of stones and the smaller circle is the pile with the one boulder sitting on it: 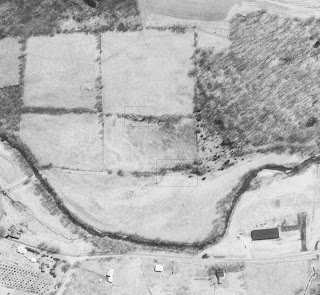 What else can be read into these photos, I wonder??
Posted by Tim MacSweeney at 6:50 AM No comments: