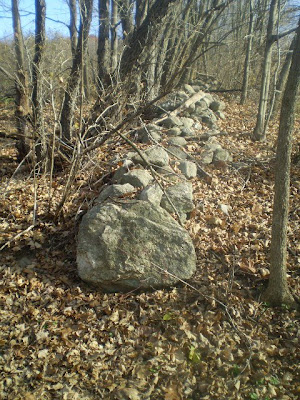 When I saw the first photo in Peter's post "Short stretches of wall - Gates Pond Rd Berlin, MA... , I thought about how I often find what I think of as "End Stones,", sometimes near water, at the end of many Linear Stone Rows that I think maybe of Native American origin. The one below is close to my house, as it looked before road reconstruction destroyed the point where the zigzag stone row met the linear row. The large end stone is by an intermittent stream along an ancient glacial lake shore on a large floodplain... 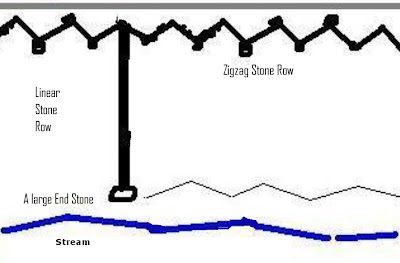 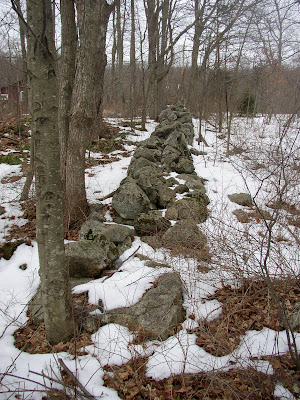 Above, before the reconstruction, looking west from the lake shore; below, looking north.

In 1960, this (and an imaginary line extending to the main river) was the southern border property line that belonged to my mother-in-law... 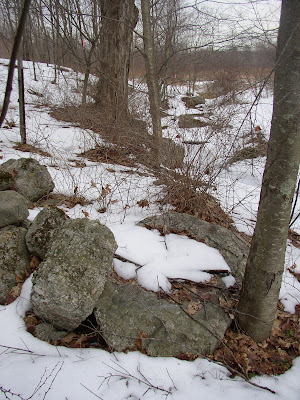 Across the floodplain, about a quarter mile away to the east, I think I see the pattern repeated, even though the row has been disturbed by natural processes over time. It's a present property line...

Up along the east branch that flows into the main river, near a waterfall, there are more linear stones rows that terminate in "End Stones." 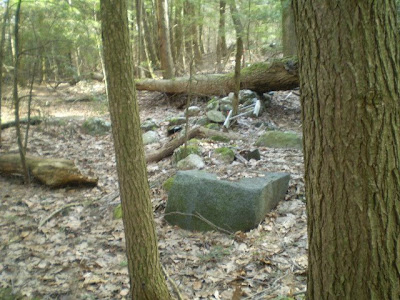 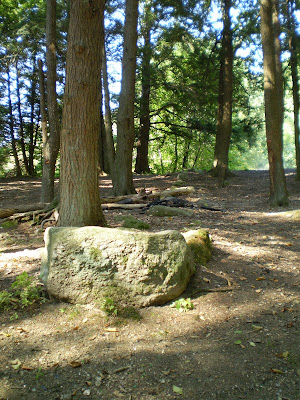 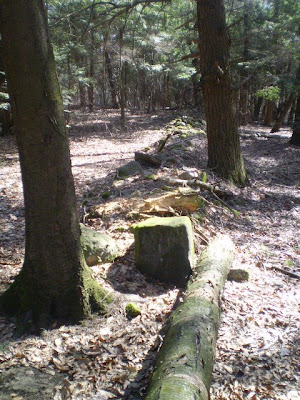 Back down to the floodplain, a stone row that changes from zigzag to linear, terminates in a large "End Stone," but this one has a rather testudinate stone on top of the boulder. 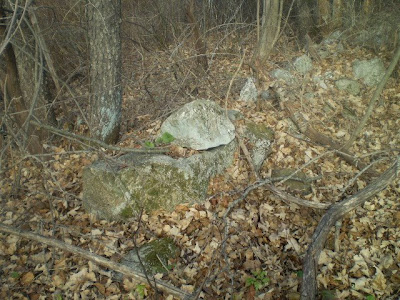 Ten miles away, to the north, near the largest remaining glacial lake in the state, the pattern appears along a roadside above the eastern shore: 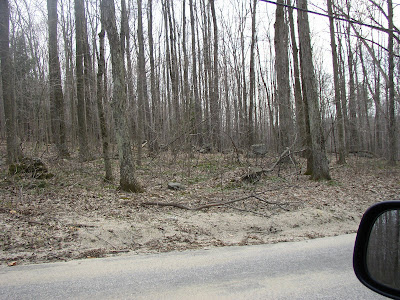 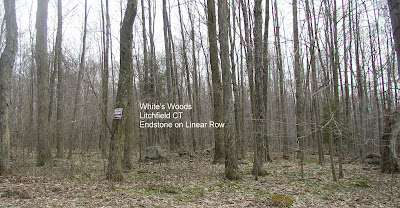 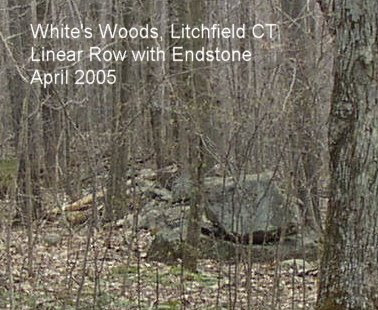 Posted by Tim MacSweeney at 5:48 AM No comments:

Spring Equinox at the Calendar

I did post Equinox Sunset 2009 over at Rock Piles just a few hours after the sunset and just edited my video footage that revealed too much about where this place is. You'll find it at the end of the post. It's sort of a tradition for me to write about this place around the spring equinox and to even visit the spot when conditions are right (Search this Blog with "Calendar" typed into the box above). I've tried before to capture the event in various media and tried it again this past friday, March 20, 2009.
I've seen this knoll change alot since the mid-1970's, when it looked like an old orchard just below it, the hillock a little roundish clearing with some stones sticking up out of the grass. Now it looks totally abandoned, dying apple trees shaded out by larger trees that have sprung up.
It's also changed in my perception as I noticed more stones - a serpentine row and even watched a 100 year flood wash clear some of the old stream beds to reveal another border of stones on the other side of the stream, realized that the branch of a river once flowed to the western edge of it and the entire floodplain - that another little stream had been diverted by a zigzag stone row to flow around this little island that was documented as a burial ground where historic Native People buried their dead beneath stone mounds, planting apple trees to the east of them and so much more...
A 1986 map with my highlighting
(North at the top): 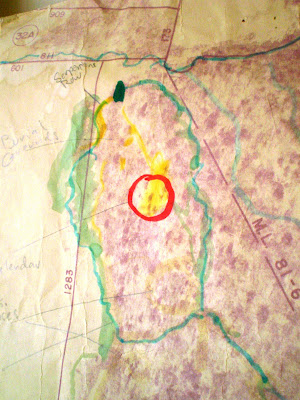 The Red circle is the Stone Calendar, the yellow a pathway as wide as whatever was used to mow that path back when a Fox Hunt Club used to run down foxes and coyotes years ago...
I came to the conclusion that the Stones were a Calendar after reading "Manitou" a couple thousand times (Other Calendars are also springing up in Google Searches on the phrase), illustrated here and there in the book, like these for example: 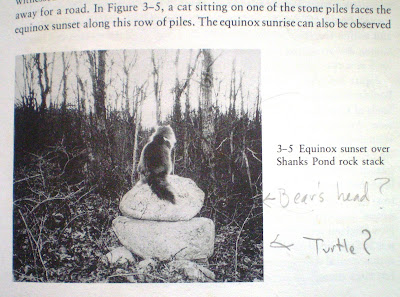 Just like that last photo with the cat, the brightness of the sun was always a problem when it came to capturing the even on film or video, so I once drew a recreation of how the place may have looked around and before 1700 and just today updated a diagram of the stones, facing west, just as in the drawing... 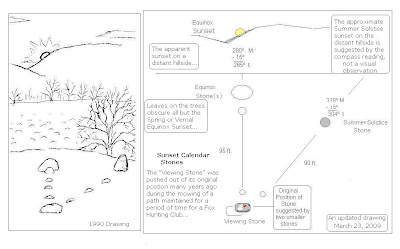 And once again I've placed my darkest pair of sunglasses over the lens of a video recording device and tried to capture the Vernal Equinox Sunset over the Calendar Stones, already thinking about how I'll do it next time...

"Here is a link to the article "Nineteenth Century Aboriginal Farmers of the Madawaska River" by Bill Allen, Heritage One Research (1.48MB pdf document): [Click here]. There is a photo on page 5 of stones on a glacial erratic."

Bill Allen writes:
"The 1871 Federal Census listed three families of Aboriginal origin living in the West Madawaska District in present day Algonquin Park (Library and Archives Canada 1871)...
I wondered where I might find evidence of the three Algonquin families. 1870’s maps gave me leads. William Bell’s 1871 timber map labelled what Bell called an "Indian
Clearing" at the head of Galeairy Lake (Bell, 1871)...Niven’s 1878 mapping was accurate and specific so I soon rediscovered both the Sharbot and Franceway clearings, now long overgrown but with multiple cultural features. I had them registered as archaeological sites BiGn-03 (Peter Sharbot Homestead) and BjGo-16 (Franceway’s Clearing). An Indian clearing? Members of the Algonquin Nations of this period were not usually depicted as farmers who cleared land or lived in fixed abodes. In both cases there was a terrace at a saddle between high wooded hills above the lake and a good view eastward to the canoe route passing the front door. In both cases birch have risen in the former clearings. In both cases large panels of birch bark have been removed from some trees that have scarred over (Figure 3). In both clearings fieldstones were piled to one side, much as one finds in farms of the 1870’s elsewhere. However, unlike 1870’s farms elsewhere there has not been continuous occupation of the land, so the land is overgrown with mature trees. Historical records show that soon after Algonquin Park was formed in 1893 all 46 of Chief Peter Sharbot’s community were evicted from Nightingale and Lawrence, the two townships they had occupied since 1849 (Bennett 1895; Reed 1894; Reed 1895, White 1895)...
...At the Sharbot Homestead, I found many of the field stones piled on flat-topped glacial erratics (Figure 4), ostensibly to maximize the planting area in the clearing. Peter Decontie, Algonquin Sacred Firekeeper from Kitigan Zibi, Quebec, has begun initial analysis of these stone piles, noting alignments, shapes, number patterns and possible effigy outlines. It may be inappropriate to use the term "cairns" to describe such piles of stones in a farming setting with potential spiritual use. Hunting activity is evident in the former clearing too. Some erratics appear to have played a role in hiding hunters, channeling game or being a platform for steadying rifles. Attracted by hunters’ calls, large game may have moved through the saddle between the two hills and on downhill to the clearing where there were fewer obstructions. A test pit beside one flat topped erratic yielded a rare .44 calibre Henry rim-fired cartridge (Figure 5), a shell that was only manufactured between 1860 and 1872 (Allen 2005a). " 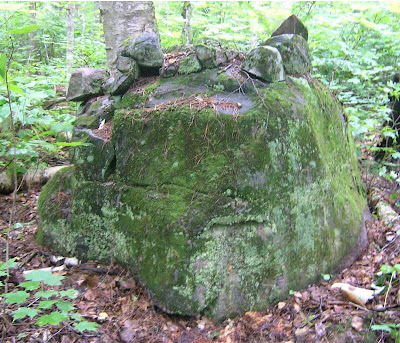 This photo reminds me of a stone at the end of my driveway: 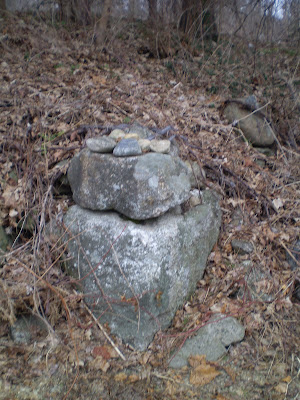 I think there'ssome stones missing from Mr. Allen's "field stones piled on flat-topped glacial erratics." There once were just a few on top of the stone at the bottom of my driveway. I just picked up some at the base of the stones and put them back on the depressions most like them (like putting pieces of a puzzle together). 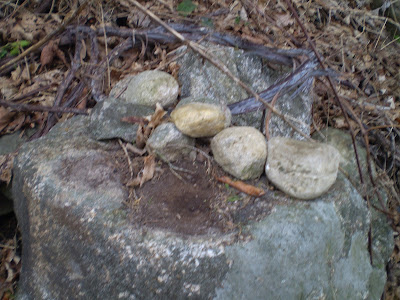 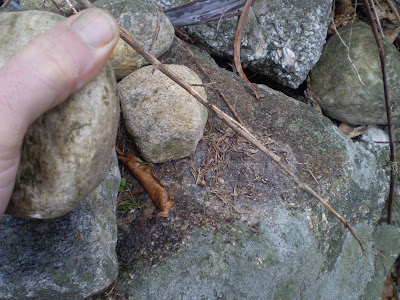 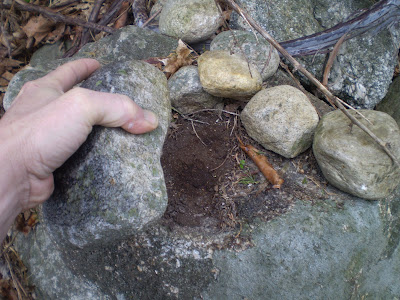 The stone at the end of my driveway is part of a zigzag stone row along a place of cleared fields where native People lived for more than ten years into the first European settlement as well as long before that...

Posted by Tim MacSweeney at 9:14 AM No comments: