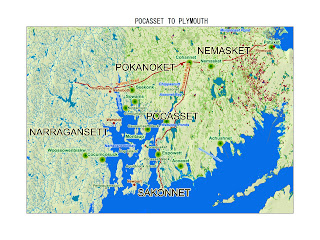 Think about how many times you may have read or heard about those early contact times, how the “first settlers” began using already cleared Indian fields. Have you ever read or heard a suggestion as to where the stones went? Think about how many times you’ve read or heard that the Indians burned the “woods” to facilitate hunting, which is slowly evolving into the thoughts that Indigenous People were actually maintaining a Cultural Landscape by selective burning that was sustainable rather than destructive (mostly), perfected with a thousand or so years of practice?  Think about how those fires may have been controlled, how just maybe those rows of stones just might have been fuel breaks created over that long period of time before European Contact, a soft term for Colonial Invasion, separating what was to be burned at a certain time for a certain reason.

Excerpt from the companion website to:
Our Beloved Kin: Remapping A New History of King Philip's War
By Lisa Brooks

The Road to Plymouth/Patuxet:
“During her journey, Weetamoo walked well-worn paths through forests which her community had long managed with fire. As Roger Williams noted, Native men performed controlled burns of the “underwoods” in the fall, which, combined with selective cutting for firewood, fostered an abundant open forest, which encouraged the growth of tall nut trees. The spacious canopy allowed sunlight to filter through the leaves, encouraging growth of berries and other edible plants. The nuts, grasses, berries, and saplings that flourished in this forest were inviting to game, while the clearing of undergrowth facilitated travel and visibility for hunting as well as gathering.
As she neared Plymouth, Weetamoo would have witnessed the changing landscape, new European plants growing among ancient fields. These plants were particularly well adapted to the stomping hooves of cattle, which were also newcomers to this land. Since court was often held on "market day" in Plimoth, Weetamoo may have encountered English men leading their cattle and other livestock to market, as she neared the colonial settlement in Patuxet. Today, we might view cattle as docile animals, contained within fences, barns and factory farms. Likewise, we might regard fire as a destructive force beyond our control. Yet, for many of the plants and people of the Wampanoag country, the opposite was true.
Cattle, horses, and swine repeatedly roamed into Wampanoag homes and fields, sometimes even signaling encroachment before settlers were seen, and “clearing the land” through their consumption. In Creatures of Empire, Virginia DeJohn Anderson has convincingly argues that livestock were “the means by which colonists established exclusive control over more and more territory. As agents of empire, livestock occupied land in advance of English settlers, forcing native people who stood in their way either to fend the animals off as best they could or else to move on.” Still some settlers sought ameliorations to prevent conflicts with their neighbors. For example, John Brown and his son-in-law Thomas Willet built a massive, “four rod” fence at Wannamoisett to make manifest the boundary between their farms and Wampanoag planting fields. However, the fence did not prevent livestock from ravaging women’s mounds. Cattle, adapting to their newfound freedom, learned to navigate the waters, traveling around the fence at low tide, leaving deep fissures in the mud which also impacted Wampanoag clam gathering on the banks.[1]
.
Accessed April 9, 2020
https://ourbelovedkin.com/awikhigan/plymouth-patuxet

Posted by Tim MacSweeney at 8:10 PM No comments: