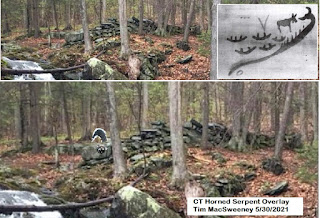 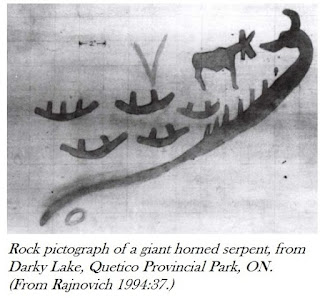 Posted by Tim MacSweeney at 8:12 AM No comments:

"Death came in the early morning hours on May 19, 1676. Hundreds of Native families were gathered under the Falls on the for the annual fish run. In May and June of each year, salmon, shad, eel, lamprey and herring made their journey upstream to spawn. The Connecticut River was thick with fish, making it an ideal time to gather food for the entire year. Annual corn fields were also growing nearby- come autumn, it would be picked and stored for the winter. And on this occasion, hungry Native refugees from war-torn Southern New England had also made their way to the Falls..." 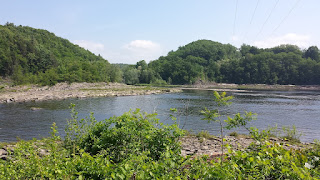 (Text and image above from: http://forallmyrelations.blogspot.com/2015/06/battle-of-great-falls-or-massacre-at.html)

On May 19, some of us will rise at dawn and follow old footpaths now become paved highways where semis and pick-ups speed down the blacktop singing under the whining and wailing tires.

Some will pass the stone monument memorializing that May 19th of 345 years ago when more than three hundred human beings were trapped and destroyed at the falls. They died at the hands of those who held swords and knives to kill more efficiently, ordered to spare their precious powder and munitions.

Some will resist the need to dump red paint on that monument, we will have a better way to shame the destroyers. We will move past that stone to reach the site where those Native people died that one day in May.

“I heard my mother scream and then heard the thunder again and saw another flash of light inside the wetu. My little brother, who was sleeping beside me, screamed and I felt his body jerk then felt hot blood squirting all over me…I grabbed my little sisters’ hands and began running through the dark, screaming and ducking whenever a gun went off.  All was confusion and noise… I remember being at the edge of the cliff beside the river. I don’t remember jumping, but suddenly I was in the river’s fast current, struggling to rescue my little sisters, and get them into a canoe…I saw a bullet slam through one sister, more bullets made the canoe twist and turn over and we all swam furiously, fighting the current taking us towards the falls. I managed to claw my way onto a rock, dragging my half-drowned sister with me. We saw the English soldiers coming down the cliff, shooting at everything, their steel swords glinting…we hid inside a small cave… then I saw a sword come down and heard my little sister scream…I saw her head fall into the river, her eyes wide with terror and her mouth cut off in a scream that would never end. I jumped into the river again and dodged bullets and rocks as I joined a large number of people swimming towards the falls.

I was swept over, flung into the air, then expecting to die as the others had on the rocks at the bottom. I don’t know how, but I landed in deep water and after falling down and down, I began to rise…one second more and I would have drowned…I could see smoke and the glow of fire and knew that the whole village had been torched…”

We don’t have to look so far however, we have right here our own place of infamy, stained with the unspeakable loss of so many human beings in a place we pass by daily without thinking.  At the very least we should pause to remember what happened that day in 1676 before we hurry on with our modern-day pursuits.

Some carry guilt, some feel the need to do penance, still others choose say that to kill was justified and right.

Some of us have studied the event long and hard and have learned.

We know that Falls Fight of 1676 in the context of King Philip’s War, was one of great tragedy for the Indigenous peoples of the Northeast. We could say too that it was a tragedy for young colonials, not blameless yet pawns in the game played out by the earliest colonial schemers who pulled the strings in plots to seize Indigenous slaves and land. They needed to provoke a “Just War”, indeed, to justify their greed. We could name John Hull, John Winthrop, Humphrey Atherton, among others of their ilk.

We know that 150 men, a mix of professional soldiers and hot-headed young settlers infuriated by their losses of kin, farmsteads, and livestock were bent on revenge when they left Hatfield on the evening of May 18. Many of them, like Custer’s men two hundred years later, rode to their doom. More than 40 of them met that fate, but not before they murdered more than three hundred Pocumtuck, Nipmuck, Wampanoag, Narragansett, Abenaki.

We have learned that they succeeded in making their way to the falls, avoiding the camps of Native soldiers at the mouth of the Deerfield, those on the islands in the Connecticut, the one on the top of Canada Hill at Wissatinnewag, the one across the river from Peskeompskut camp, in what is now known as Unity Park. Instead of facing a worthy adversary, they fell on the relatively poorly defended camp of non-combatants.

We have learned that they lingered too long killing and looting, so that all those Native camps were aroused and began to counterattack. The raiding force was chased seven miles back the way they came, all the way to the North Meadows of Deerfield. The Colonials lost more than forty men in that panicked retreat.

Our research has yielded more than 600 battle artifacts, mostly musket balls from that day along the trail of retreat. Most of those lead balls were fired from east to west at the retreating militia, indicating that the Natives were heavily armed, and in fact out-gunned the Colonials.

We have learned of a primary source eye-witness account of the death of Turner, provided by a Narragansett warrior, John Wecopeak, who was with Turner when he was shot.

At his trial in August 1676, Wecopeak related the incident written down by the clerk of the Newport RI court before he was taken from the court room and executed.

“ John Wecopeak alfo faith that he was at the Fight with Captain Turner and run away by Reafon the Shott came as thick as Raine, but faid alfoe, that he was at a great Diftance.

Butt John Godfree faith that the faid Wecopeak told them that he faw Capt. Turner, and that he was fhott in the Thigh, and that he knew it was him, for the faid Turner faid that was his Name.

Voted guilty of the charge, and to dye as the others.

Record of Court Martial held at Newport RI in Auguft,1676,

For the Trial of Indians charged with being engaged in Philip’s Defigns.”

We have re-learned the names of many of the Native leaders and will repeat them at each telling of the fight at the Peskeompskut Falls:

Yet we have also learned that through the telling and remembering, there can be healing.

Representatives of the five towns where the events unfolded in those days before those very towns existed, and representatives of four tribes that have been here for millenia have been meeting monthly for more than six years reaching deep into records and memory to find out what may have really happened and more. To bring forth, to give voice to the multi-generational trauma that has had enduring impact on the Indigenous people of our region.

We are not looking back in anger, but moving slowly toward healing through study, music, sharing, and learning on the banks of this great, tragic, and eternal river.

“ For myself, I’d like to think that the memory of the place by the Great Falls is being re-examined through this joint town-tribal project for a reason….working to preserve the site has brought Northeastern tribal descendants and townspeople together…So long as we allow space for differences, and above all treat the people who perished here with the dignity and respect they did not receive in life, we will be making some advances towards healing and draw more meaningful lessons from this war.”

Posted by Tim MacSweeney at 10:08 AM No comments: 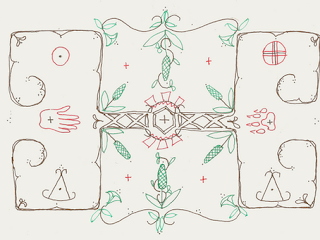 W8li Acim8, Wunne Achimu, Good News: MassDOT has cancelled its plans for a roundabout that would have destroyed the legacy of an ancient ancestral Indigenous village with unique artifacts.

Thank You Land Protectors and Equal Preservationists, Your strong opposition is cited as a basis for this change.

"NORTHAMPTON — The state has cancelled its plans to build a traffic roundabout at North King and Hatfield streets on what’s also the site of a 10,000-year-old 'undisturbed ancient village.'"

Early on, we were attacked for standing up and criticized for calling the site a village, but obviously, this interpretation is now accepted and our stand is validated.  They said "no Native Americans are concerned, " but we showed that Natives and diverse Americans care very much.  Thanks to the Skibiski family, River Valley Co-Op, Aquinnah Wampanoag Cultural Resources Office, Nolumbeka, Mark, Rochelle, Anthony, Tyler, Don, Peter, Rob, Mary Lou, Gia, Christopher, Jose, Leah, Kenneth, Eric, Eileen, Amy, Adele, Alex, Sarah, Wayne, Martin, Chris, all 55,000+ people who signed the petition on behalf of justice in historic preservation, and everyone who supported.

“MassDOT has determined that the best next step is to terminate the current construction contract and undertake a re-evaluation of the project design. The re-evaluation option is responsive to the nature of the public comments received, which asked MassDOT to consider alternatives that avoided the location of the archaeological site,” the notice said. “This re-evaluation will take public opposition into account as a key evaluation criterion for all design alternatives considered.”

Posted by Tim MacSweeney at 7:39 AM No comments: 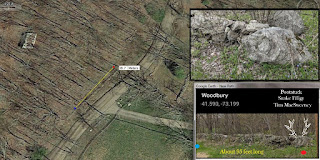 If the stone wall begins with something that resembles a snake's head, then it is most likely an Indigenous construction worthy of further investigation. 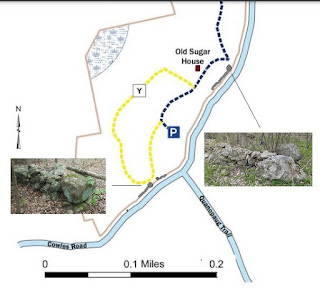 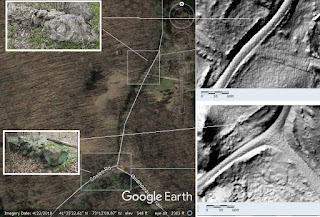 If the Qusuqaniyutók (‘stone row, enclosure’ Harris and Robinson, 2015 :140, ‘fence that crosses back’ viz. qussuk, ‘stone,’ Nipmuc or quski, quskaca, ‘returning, crosses over,’ qaqi, ‘runs,’ pumiyotôk, ‘fence, wall,’ Mohegan, Mohegan Nation 2004:145, 95, 129), begins with the head of "a type of mythological freshwater serpent common to many tribes of the eastern United States and Canada...usually described as huge, scaly, dragon-like serpents with horns and long teeth...possessing magical abilities such as shape-shifting, invisibility, or hypnotic powers; bestowing powerful medicine upon humans who defeat them or help them; controlling storms and weather, and so on...venerated as gods or spirit beings in some tribes," then it is most likely an Indigenous construction worthy of further investigation… 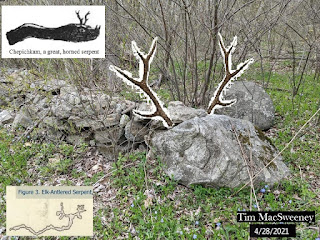 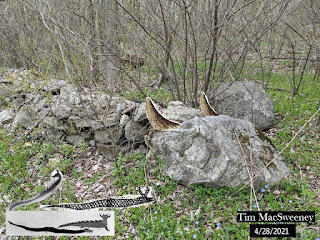 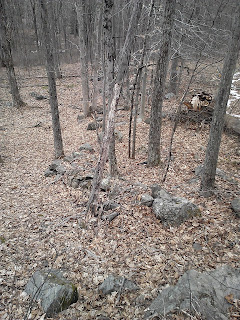 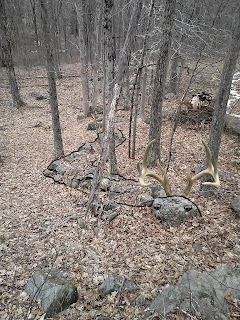 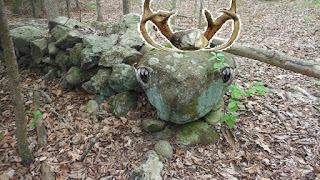 "According to Mooney (1900:458-459), the name Uktena is derived from akta, or eye, and implies being a “strong looker,” as everything is visible to it (i.e., it can see thoughts). From the same root is derived akta’tĭ, “to see into closely” which is also the Cherokee word for a magnifying lens and telescope. So the name Uktena implies that it sees thoughts and it does so in an accurate way; knowledge that comes in useful to predict enemy tactics (Jannie Loubser - E-mail communication July 21, 2015). " - Uktena "strong-looker"
The Uktena knows your intentions, as you enter the place he guards with his encircling body. The Uktena can help control wildfires set by lightening from the Thunderbird's eyes. Stone Uktena can act as fuel breaks for purposely set controlled Indigenous fires...
https://wakinguponturtleisland.blogspot.com/2018/11/pootatuck-stonework-on-trail-to-roaring.html