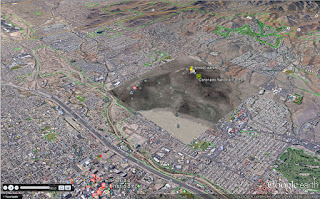 “Tumamoc, which is an O'odham word for "regal horned lizard",[2] was a home to the ancient Hohokam people. It is the site of the earliest known trincheras village, consisting of 160 foundations of round stone structures, as well as large stone perimeter walls.[3] Over 460 petroglyphs and a prehistoric garden beside the hill provide further evidence of Tumamoc’s importance to these people.[3] For long after that time, 1,300 years ago, the site continued to provide resources to the Tohono O'odham, Akimel O'odham, and the Hopi. It has also been reported to be a burial site for the Apache and the O'odham.[3]
Captain Juan Mateo Manje, a Spanish military commander, wrote the following about Tumamoc Hill after seeing it on one of his expeditions with Father Kino between 1693 and 1701:[4] 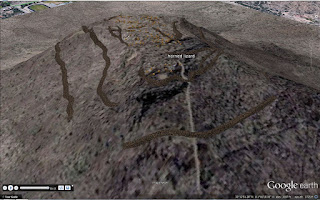 Note that Manje refers to "former" wars, indicating that the fighting took place in prehistoric times (before the arrival of Europeans). Being that the O'odham are probably descendants of the Hohokam, it does not seem unreasonable to conclude that the Hohokam, who lived only a few centuries before Manje's expedition, did as their later relatives apparently did and used their trincheras to fall upon their enemies and kill them.[4] 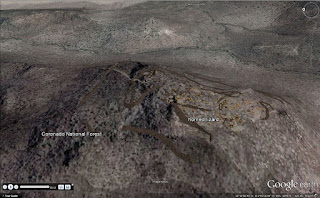 European settlers prized the rock and clay found on the hill for building in the late 19th century, and early ecologists just after the turn of the 20th century selected it for the site of the Carnegie Institute's Desert Laboratory.[3][5] The hill continues to be a landmark and a sanctuary for the people of Tucson today. The road up Tumamoc Hill is a popular destination for walking and running. The entrance to the road up the hill is located across from St. Mary's Hospital on the south side of Anklam Road. It is open to pedestrians in the early mornings and evenings. The steep hill provides a strenuous workout, as well as citywide vistas. Lectures on the unique history and ecology are presented for the public at the site...” 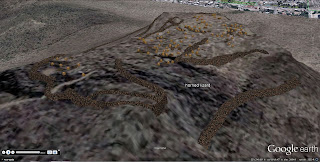