Article in a Newsletter 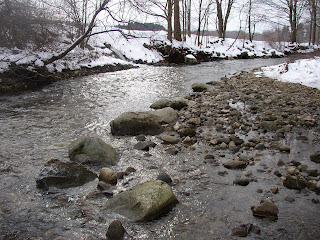 Nothing ever happened.
Yet.

Posted by Tim MacSweeney at 8:45 AM No comments:

A Friend of Mine 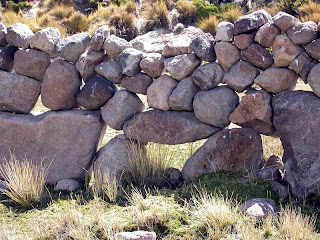 I just got back into contact with a long time friend, Roger Makepeace.
Walking anywhere with him was like having a living fieldguide to the plant kingdom.
Knowing my interest in stone rows, he sent me this photo, writing "Found miles of lace walls in the Andes" when he went to Peru and Bolivia last winter.

He's got a website at http://llareta.com/ and a blog at http://ecohomewnc.tripod.com/peru/ where he's got photos that always come to my mind about the bigoted statement you hear about "Indians weren't intelligent enough to build with stone," especially when I think about corn and other veggies traveling along trade routes. 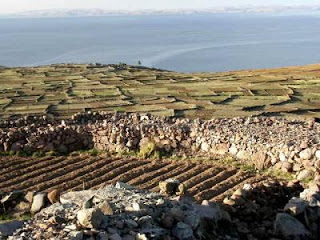 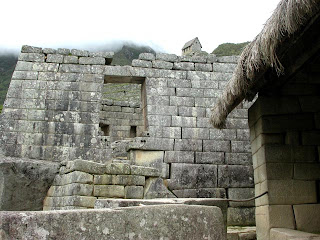 There's lots more fine photos of more stonework at Machu Pichu and else where at his site
I owe thanks to his sister Anne Makepeace (http://www.makepeaceproductions.com/ )
who is currently working on a project for PBS:


"From the award-winning PBS series American Experience comes "We Shall Remain," the most ambitious primetime television series and media project on Native history ever produced."
http://www.pbs.org/wgbh/amex/weshallremain/index.html
Posted by Tim MacSweeney at 8:38 AM No comments:

Because I saw the link at RockPiles, http://greatmuin-rockpiles.blogspot.com/ ,
I'm posting these for "greatmuin."
(And the others who read these rants too.)
I saw greatmuin's photos, asked some questions and promised a post.
Sorry about the quality of the images...

I found an old history that talked about a burial grounds; spotting the oldest of trees near where it might have been, I was intrigued by a serpentine row of stones I first noticed by a large Hemlock. 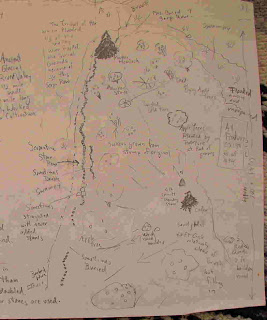 This later but looks like I was too lazy (or busy, maybe) to make them look as serpentine as they really are:

Detail of the terrible photo:

The row turns to zigzag as you follow it south - and connects to other rows. It's hard to capture in photos... 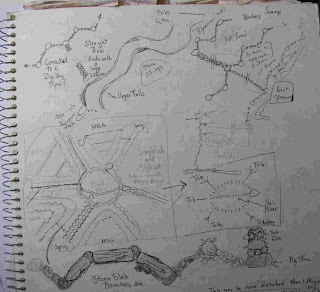 I threw this in as an after thought, a musing about the landscape as a turtle.
We are Waking Up On Turtle Island after all...

Some featuresof the many rows, often repeated elsewhere...
Posted by Tim MacSweeney at 9:53 AM 2 comments:

Sun shines brightly as my daughter lies in the grass
quiet afternoon in suburban Seattle
her hair shiny, her skin smooth, fingers small
easy lift of her chest as she naps in the yard
I cover her with a parasol; her skin might burn,
I will do anything to protect her

Sun shines brightly as my daughter lies in the grass
the sound is deafening in suburban Baghdad
her hair matted with blood, skin torn, fingers ripped
her chest heaves as she struggles to stay alive
I cover her with a blanket, her skin burned
I could not protect her…

In SUSAN ALLPORT’s “Sermons in Stone; The Stone Walls of New England and New York,” the author writes, “In 1871 there were 252,539 miles of stone walls in New England and New York—enough to circle the earth ten times.”
Out of those quarter-million or so miles of “fence,” you’ll find many a “stone wall” that turns “lacey” (Allport's book includes a study of Lace Walls on Martha's Vineyard on pages 120-30).
My friend PW writes at Rock Piles: “It seems to be a classic pattern that a stone wall becomes suddenly higher as it passes over the high point of a knoll. While passing over this high point, the wall also becomes lacey: with one or several holes that you can see through.” 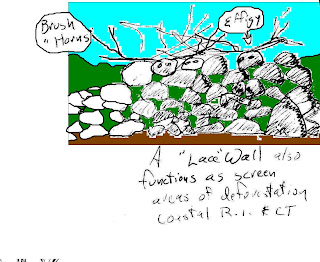 (The row should be higher than I've drawn - or drew a long time ago - so that a person could stand behind it - and resemble the place in CT that I showed Peter and Norman a few years back, where a 3 foot high row makes a "wave" 5 or 6 feet high. I've seen similar in Rhode Island also too.)


People come up with lots of suggestions as to why these lace walls occur – wind spirits pass through them easily, lack of stones to build a tall row of stones as sheep fences, and more. I have a simple explaination: you might be waiting at a kill site and a really high spot would allow you to stand up (to ease your aching back) and keep watch, assuming you believe a lot of stone rows were Native American made and functioned as hunting devices, sort of like a fish weir for deer or other game.
A not so high spot might allow you to squat or sit on a stone, as shown in this recreation made by stealing an image off of Google to add to my friend’s Rock Piles image… 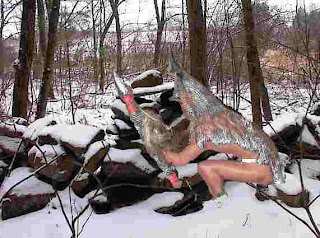 And he's got an animal skin on his head, ears and all, sort of like the effigies on my drawing above, athough he seems otherwise under-dressed for the weather.
Posted by Tim MacSweeney at 9:13 AM No comments:

"King Philip’s War was one of the bloodiest and most costly in the history of America. One in ten soldiers on both sides was injured or killed. It took many years for Plymouth and the other colonies to recover from damage to property.
The outcome of King Philip’s War was devastating to the traditional way of life for Native People in New England. Hundreds of Natives who fought with Philip were sold into slavery abroad. Others, especially women and children, were forced to become servants locally. As the traditional base of existence changed due to the Colonists’ victory, the Wampanoag and other local Native communities had to adapt certain aspects of their culture in order to survive."
http://www.uswars.net/1675-1676/

"The war is named after the main leader of the Indian side, Metacomet, Metacom, or Pometacom, known to the English as "King Philip"."

Posted by Tim MacSweeney at 9:35 AM No comments: