I already knew "Honu" is Turtle in Hawaiian.

I just learned that "Pohaku" means Stone in Hawaiian.
I tried a little search on these words. 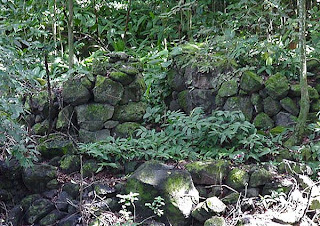 "Ruins of what may have been the Kaheiki heiau lie in the undergrowth in lower Nu‘uanu. But different accounts place this ancient temple in different locations.

Nu‘uanu is mentioned in the earliest legends, as Puakea has told us. Aside from the gods who were in residence here, who were the people? As in other parts of the islands, these ancients include the menehune and other strange creatures referred to as the ‘e‘epa. Like the menehune, the ‘e‘epa are generally described as being short in stature ("imps," one source says; "gnomes," according to another). These creatures were placed there by the gods to guard legendary beings described in the next page. But there are traditions and landscapes associated with them here..."

" Ahu Pohaku Hoçomaluhia"
"A mysterious circle of stones lends its name to a new high-end health retreat, Ahu Pohaku Ho'omaluhia, near Hawi, on the Big Island."
http://the.honoluluadvertiser.com/article/2006/Oct/15/tr/FP610150341.html
I even came across this: http://www.hinaadventures.com/ecotours/hawnlegends_ecotour.htm
that mentions some of my favorite words, such as "Sacred Stones" and "scenic cultural and sacred sites ."
Let's just say I may have some original photos of Pohaku soon...
Posted by Tim MacSweeney at 8:48 AM 1 comment: A New Look for an old Country Road 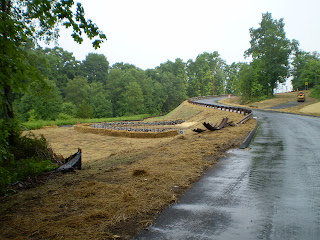 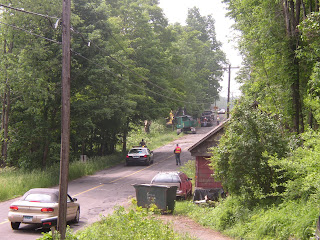 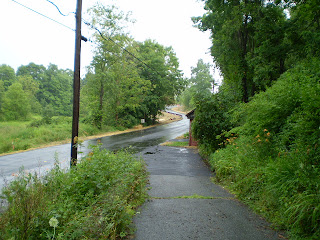 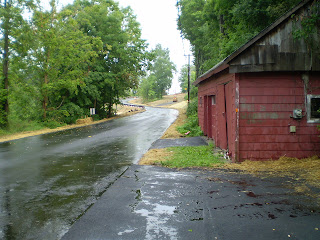 Posted by Tim MacSweeney at 8:11 AM No comments:

My road transformed into an exit ramp... 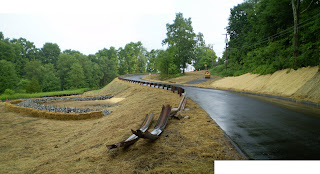 Posted by Tim MacSweeney at 9:44 PM No comments:

Since my road has been blocked off, I've had to use an alternate route to get to or from home. I don't know exactly when, but it seems my neighbor up the road (i.e. the state highway) has been envisioning stones as turtles and in fact enhancing that vision with paint. Have they been reading this blog or is it an independent vision? 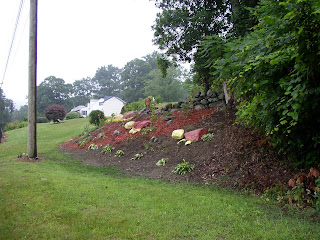 I don't know, but I present the Painted Turtles. 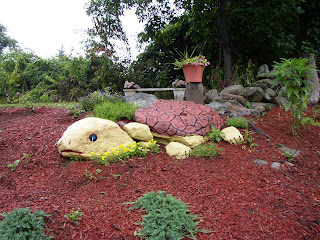 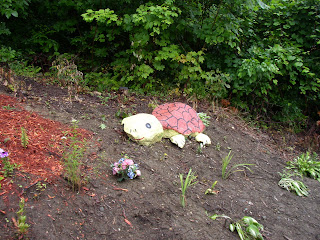 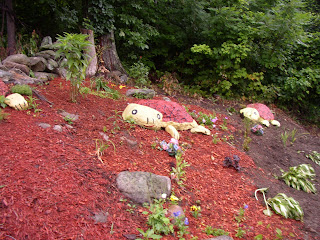 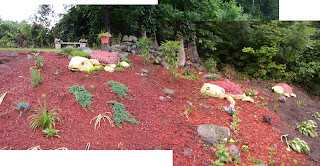 An aside from this is the story of a nun from a nearby Abbey who, many years ago, also saw stone and boulder combinations as testudinate forms of Native American origin, leading her to a degree in Archeology and an occupation of Biblical Archeology.
Posted by Tim MacSweeney at 8:22 AM No comments: 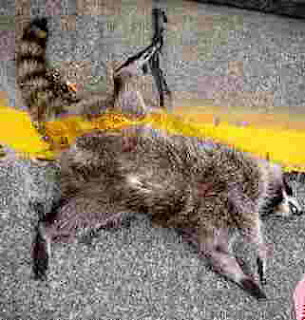 I'm sure you may have seen at least a few photos of "A Dead Raccoon In the Center of the Road with a Yellow Line Painted on it by a Road Crew."

Here's a little bit about my barn/workshop I've been using for 25 years, my wife's family for 20 or so years before.
It's been turned into a dead raccoon with a line painted across its body.
About 2 years ago, a guy from a Connecticut TV station was knocking on my door. He was asking what I thought about the proposed realignment of my road.
I was surprised about this - it was the first time I'd heard of such a thing (I'd recieved no registered letter informing me of this proposed change). He said it was a plan to help prevent accidents at the intersection of my road and the state highway. Having been here for so long, I was aware of many accidents on the curve of Route 61 near my road, but only one actually on my road - a really horrible accident, alcohol and high speed related - right where I would have parked my vehicle if I had gotten home half an hour earlier - or even have been in a position to be hit head on by a fullsized pickup truck.
I attended a town meeting in July 2005, expressed concerns about destruction of stone fences that reach back into possibly prehistoric times, my new neighbors also concerned about the rural nature of the view from their new home as it affected their property value - and would end up pointing the lights of traffic exiting my road directly into their new home. I brought up the issue of accidents happening on Route 61, by people traveling either north or south on Route 61, almost exclusively. We both asked to be notified by mail of upcoming meetings that would address the road issue.
I got traffic reports from the CT DOT that confirmed that I was just a little off - someone had rear ended someone at the stop sign at the end of my road.
I also came to the realisation that the road signs that warned motorists of the curve, the reduced speed limit etc. had been there so long that they were no longer reflective, as well as being covered by the foliage of trees and Virginia Creeper. I called DOT to tell them about this and the signs are now clearly visible and reflective, since the majority of accidents happened at night.
I also contacted many people about the stone fences, heard from a few, and got no response from others.
I attended a second meeting in September of 2005 (having heard about it from my nieghbors, no communication from the town), again brought up my issues, again asked to be notified by mail about the situation.
My neighbors and I heard nothing further about the road. Spring 2006 arrived and nothing happened, no notification of any meetings, no registered letters sent to any of us about the proposed roadwork.
We assumed that the plan had been voted down.
Suddenly, almost two years later, things began happening - documented in some earlier posts on this blog.
I finally got to see the plan and found that someone had painted a dead raccoon, using a Tax Assessor's map from 1987 that also painted a dead raccoon, the dead raccoon being my workshop: 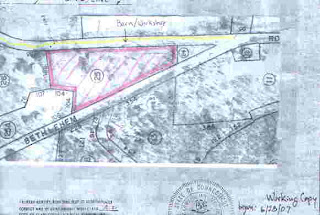 I dug up a survey of my property and taped it onto a makeshift shadowbox. I made a copy of the plan, laid it over the survey and corrected the mistakes: 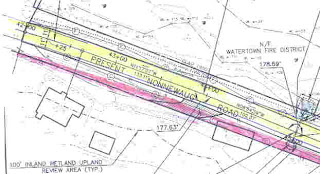 The actual position of the road is highlighted in yellow.
The pink area is my property, which also includes about a quarter of my workshop, not to mention my stone fences and antique roses.
We'll see what happens next...
Posted by Tim MacSweeney at 8:50 AM 1 comment: