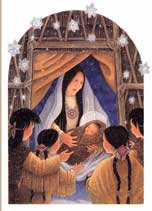 From Wikipedia, the free encyclopedia:
"The "Huron Carol" (or "'Twas in the Moon of Wintertime") is a Canadian Christmas hymn (Canada's oldest Christmas song), written in 1643 by Jean de Brébeuf, a Jesuit missionary at Sainte-Marie among the Hurons in Canada. Brébeuf wrote the lyrics in the native language of the Huron/Wendat people; the song's original Huron title is "Jesous Ahatonhia" ("Jesus, he is born"). The song's melody is a traditional French folk song, "Une Jeune Pucelle" ("A Young Maid"). The well known English lyrics were written in 1926 by Jesse Edgar Middleton.
The English version of the hymn uses imagery familiar in the early 20th century, in place of the traditional Nativity story. This version diverts from Brebeuf's original song and Huron religious concepts. In the English version, Jesus is born in a "lodge of broken bark", and wrapped in a "robe of rabbit skin". He is surrounded by hunters instead of shepherds, and the Magi are portrayed as "chiefs from afar" that bring him "fox and beaver pelts" instead of the more familiar gold, frankincense, and myrrh. The hymn also uses a traditional Algonquian name, Gitchi Manitou, for God. The original lyrics are now sometimes modified to use imagery accessible to Christians who are not familiar with Native-Canadian cultures.
The song remains a common Christmas hymn in Canadian churches of many Christian denominations. Canadian singer Bruce Cockburn has also recorded a rendition of the song. It is also sung by Canadian musician Tom Jackson during his annual Huron Carole show.
In the United States, the song was included as "Jesous Ahatonia" on Burl Ives's 1952 album Christmas Day in the Morning and was later released as a Burl Ives single under the title "Indian Christmas Carol."

*The Mi'kmaw word "sisipk" is preferred by many to "jipji'jk" for "birds".
Translated by Mildred Milliea,
edited by Eskasoni Elder's Committee,
and sung by the Eskasoni Trio.
copyright © 2001
Download this MP3
http://firstnationhelp.com/huron.html

Lyrics, translation and discussion of the Bruce Cockburn version of the Huron Carol, including critique of the Middleton lyrics
Posted by Tim MacSweeney at 10:24 AM No comments: