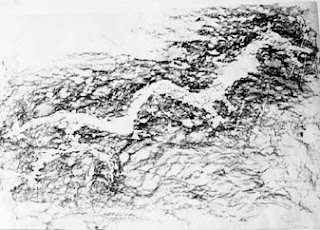 Petroglyph at Emden, Maine (Fig. 17).
"Two years ago one wet spring weekend, I invited a friend and colleague, Dr. John Pohl, to join me at a meeting with the Green Mountain National Forest archaeologist, Dave Lacy, and others to discuss the prospect of future study of the Smith site and other cairn sites in the vicinity.  At site R7-2, after we had walked the length of the wall-over-the-stream, John Pohl was asked what he thought of it, and he forthrightly said that it reminded him of a water serpent.  John is an expert in pre-Columbian art and archaeology, and is also a consultant to the Moundville Mississippian site in Alabama.  His comment illustrates the gulf between those who have a thorough grounding in American Indian cosmology and religion, and are not afraid to entertain original thoughts about perplexing issues, and those who are trapped in the paradigm that says the Indians had no stone building technology before the arrival of Europeans with their superior knowledge in the sixteenth and seventeenth centuries.  Most archaeologists in the Northeast view structures of this sort as the crazy design of some misguided colonial farmer, and cannot get beyond this viewpoint.  For instance, since an area north of the Smith site was said to be gold country in the 19th century, one suggested that the culvert was a sluice to separate gold from the dross, similar in construction to the flue of the Ely Copper Mine in Orange County, Vermont (Neudorfer 1980: 52).

If we can get beyond the mental barrier that says the Indians had no stone building technology, then the connection that Pohl proposed makes eloquent sense.  Snakes or serpents are common to the mythology of many Indian tribes from South and Central America, where it is the feathered serpent.  In North America it is the water serpent.  As the Vastokases have written, “the dwelling places of these great snakes are the insides of hills near lakes, where underground passageways provide access to the water” and the meaning of snakes to the Algonkians was multi-layered.  “They may represent the powers of evil and darkness in their manifestations as fish-tailed or horned monsters, but they can also signify the energy of life and the powers of regeneration; in myths they sometimes function as vehicles of transition for the soul’s journey to the netherworld” (Vastokas & Vastokas 1973:95).   To Barnouw (1977:18) “great horned serpents appear as entrance-way guardians.  The bridge crossing over a river into the land of the souls is a serpent disguised as a log.”  Images of these creatures appear in the Peterborough petroglyphs (Fig. 16) and in a petroglyph at Emden, Maine (Fig. 17), among other places.  Interestingly, the Kennebec River in Maine, in the Algonkian language, means serpent (Brinton 1868: 108)."
Taken from:

Looking at an older notebook, a sketchpad actually,
At the top of the page was this photo, rubber cement still holding it in place: 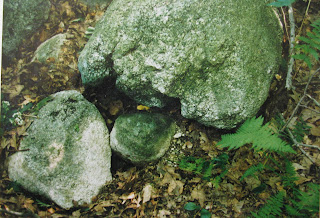 It is a photograph of what I think of as "Turtle One," the first "can't be anything but a turtle petroform" I first photographed back in 1996. Three Archaeologists so far have claimed to see no possibility of human enhancement to the large four foot long boulder or any placement of any other stones as part of an effort to form a distinct resemblence to a Box Turtle.

It's a glacial erratic, of course... 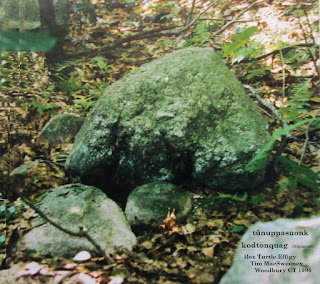 One of those Archaeologists later apologized to me for believing I was "totally bonkers" when I showed her this tûnuppasuonk kodtonquag - turtle effigy in stone (Nipmeuw). I told her it wasn't necessary, as we walked to our cars after her talk about Ceremonial Stone Landscapes entitled "Hidden in Plain Sight." The existence of stone turtles on a cultural landscape on Turtle Island doesn't preclude the fact that I may well be "totally bonkers."
As of this date two additional archaeologists have confirmed that it is indeed a turtle effigy.
A publication by one of them: 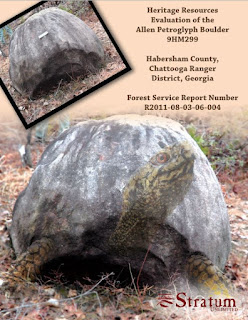 Shortly afterward, I photographed these down along the present day road that was originally an Indian Trail.
I don't know if these survived the road reconstruction of 2007.
I'll have to look when the stone starts melting... 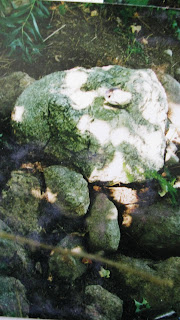 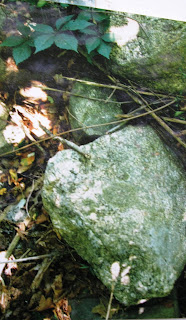 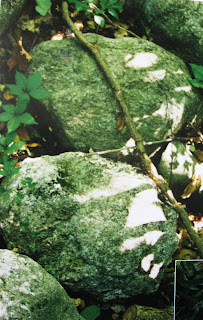 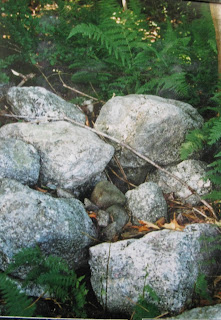 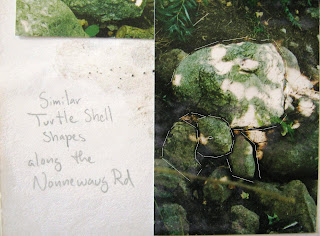 Posted by Tim MacSweeney at 8:56 AM No comments: