Serpent Thoughts (With Out Feathers) 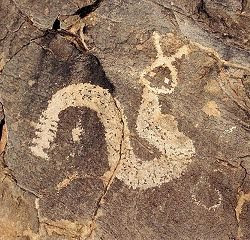 The Horned Serpent vs The Feathered Serpent

After reading the newspaper story about Mike and the Serpent Stone he found in Woodbury (http://rockpiles.blogspot.com/2010/05/woodbury-man-claims-to-have-found.html) and saying, “To read more about the serpent, and to see stone structures that resemble the "foot snake" read the Rock Piles Blog...), I thought I’d post some past links about the Horned Serpent of Turtle Island since I am Waking Up On Turtle Island once again. Open up some new windows with a right click on the links, so you don’t lose this page.

From Wikipedia, the free encyclopedia:

“The Horned Serpent appears in the mythologies of many Native Americans.[1] Details vary among tribes, with many of the stories associating the mystical figure with water, rain, lightning and/or thunder. Horned Serpents were major components of the Southeastern Ceremonial Complex of North American prehistory. [2][3]

The Horned Serpent was venerated, in various forms, by the Cherokee, Choctaw, Chickasaw, and Creek, just to name a few. Some myths say it is invisible, or that it brought rain and made a noise similar to (but not the same as) thunder.[citation needed]

Among the Eastern and Western Cherokee Indians, the horned serpent known as Uktena was venerated. Anthropologist James Mooney, describes it thus:

"Those who know say the Uktena is a great snake, as large around as a tree trunk, with horns on its head, and a bright blazing crest like a diamond on its forehead, and scales glowing like sparks of fire. It has rings or spots of color along its whole length, and can not be wounded except by shooting in the seventh spot from the head, because under this spot are its heart and its life. The blazing diamond is called Ulun'suti -- "Transparent" -- and he who can win it may become the greatest wonder worker of the tribe. But it is worth a man's life to attempt it, for whoever is seen by the Uktena is so dazed by the bright light that he runs toward the snake instead of trying to escape. As if this were not enough, the breath of the Uktena is so pestilential, that no living creature can survive should they inhale the tiniest bit of the foul air expelled by the Uktena. Even to see the Uktena asleep is death, not to the hunter himself, but to his family."

According to Sioux belief, the Unktehila (Ųȟcéǧila) are dangerous reptilian water monsters that lived in old times. They were of various shapes. In the end the Thunderbirds destroyed them, except for small species like snakes and lizards. This belief may have been inspired by finds of dinosaur fossils in Sioux tribal territory. The Thunderbird may have been inspired partly by finds of pterosaur skeletons. [4]

• The Uktena And The Ulûñsû'tï 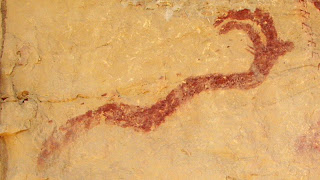 
And then there's Wiki's link to: http://www.sacred-texts.com/nam/cher/motc/motc050.htm, "The Uktena And The Ulûñsû'tï," the latter "...a bright, blazing crest like a diamond upon its forehead..."

The most famous Horned Serpent? 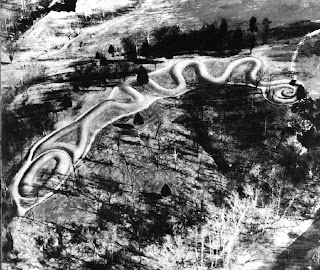 Great Serpent Mound, Ohio
The following passage has been adapted to modern usage from an account given by Tuscaroran Chief Elias Johnson.

“A Great Horned Serpent also next appeared on Lake Ontario who, by means of his poisonous breath, caused disease, and caused the death of many.
http://cosmictusk.com/e-p-grodines-compilation-of-first-peoples-accounts-of-the-yd-impacts

I found and posted these: 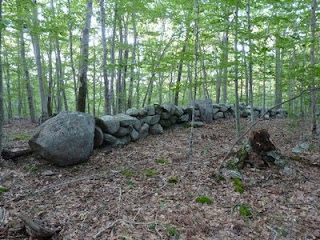 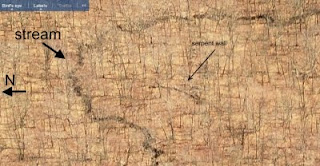 I really do believe Mike’s stone is a Native American creation, the foot snake a cultural motif. Next time I see him I’ll ask about the stone wall business. Some people insist that certain “stone concentrations” actually recall the Serpent as a “wall,” perhaps better described as a petroform. Some great photos can be found at, like the entry for 9/1/ 2009 at Ceremonial Landscapes:

http://www.ceremonial-landscapes.com/blog/index.php?/archives/P4.html, if you scroll down to “The serpent wall.”

My friend Peter was moved to make a Christmas post at his Rock Piles Blog:


On the more serious side: http://rockpiles.blogspot.com/2008/05/uktena-horned-creature-with-diamond.html


And I’m sure if you search his site, you’ll find lots more.

• I’ll leave you with these from a series of posts, probably best read from oldest post to newest: http://wakinguponturtleisland.blogspot.com/2009_09_01_archive.html
Posted by Tim MacSweeney at 6:13 AM No comments:

What can I do to protect archaeological resources located on my property?


Good stewardship begins with responsible actions. Native American sites can be very old, very fragile, and offer significant insights about the distant past. If you discover Native American artifacts, contact the Office of State Archaeology for appropriate guidance. 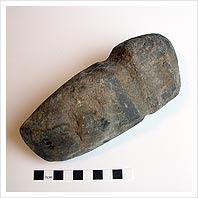 If you occasionally find broken bits of early ceramics or other colonial artifacts while gardening or landscaping, develop a system for recording or cataloging where these discoveries occurred. Draw a map of your property and describe where and how each find was discovered. This information will help future property owners, historians and archaeologists better understand the property's changing history and use through time. However, if you discover a buried foundation or a dense concentration of historic artifacts on your property, seek the professional assistance of the Office of State Archaeology. 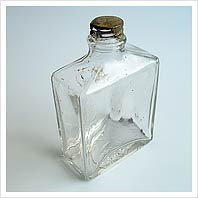 Where can I donate my collection of artifacts?

The Museum of Natural History/Connecticut Archaeology Center is the official state repository for archaeological artifacts from Connecticut, and we are always interested in pre-historic and historic materials that will increase understanding of the past. If you have materials you think might benefit this effort, and are looking for a safe, pemanent home for them, please contact our Collection Manager, Cheri Collins, and we will be pleased to consider them.

CT Archaeology Center
Posted by Tim MacSweeney at 6:05 AM 3 comments:

WNPR news article (with audio, a photo and a Flickr link) that states, “New England has miles upon miles of old stone walls on its landscape…” 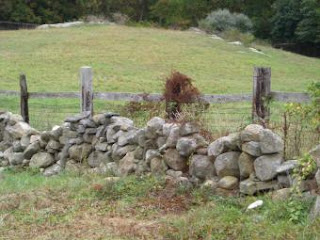 Posted by Tim MacSweeney at 5:41 AM No comments: