Looking for patterns and using an organic form of Facial Recognition Software
in photos from a
http://rockpiles.blogspot.com/2015/09/multi-feature-site-from-ne-pa.html 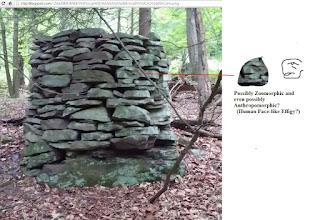 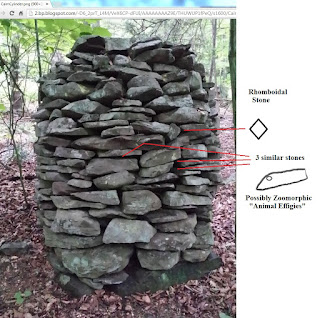 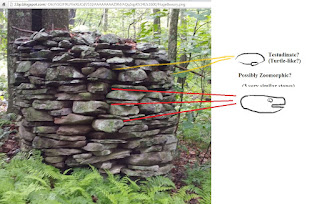 "One is an accident, two is a coincidence and three is a conspiracy."
Some different renderings: 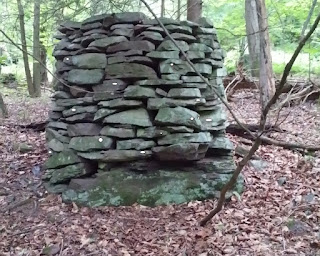 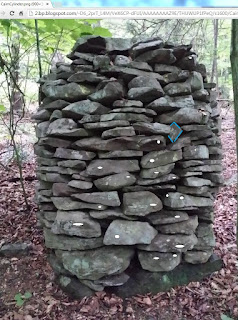 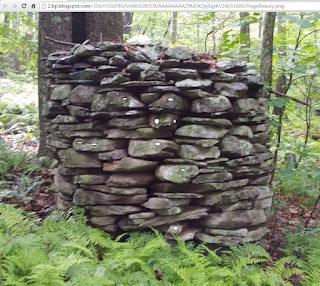 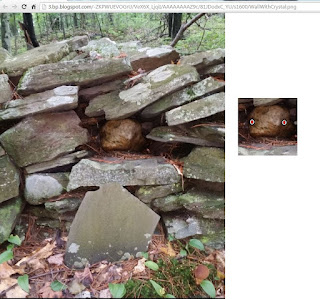 Note the suggestion of a stone "plaston" or lower shell in front of the quartzite stone. It is anyone's guess that the stone with the manitou stone-like qualities leaning up against the wall segment might have been used to cover up or hide the quartzite cobble or not but the leaning manitou has often been noted in my friend Norman Muller's observations in many places...

My friend Peter suggests that a circular grouping of stones may be an effigy. I agree with that and suggest it may be a disturbed Turtle-like effigy, the carapace removed from its original position, the suggestion of a similar plastron or lower shell by the suspected head stone of the suspected effigy: 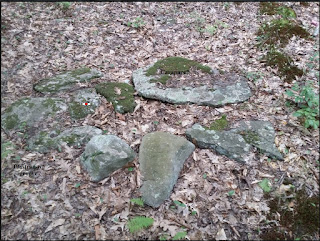 It has been suggested to me that the stone piles are in a very good state of preservation as well as observations from people commenting on a reposting these photos taken from the Rock Piles blog, at https://www.facebook.com/groups/4585999861/
stone piles on ledge tend to be in better condition than others built on soil, prompting questions about the condition of other stone piles (the first I heard of the 3500 acre site mentioned that there are "over 119 stone piles with more than 50 being of cylinder style w/ crystal (Quartz/quartzite?) on top. The others are mounds or piles. There is also odd shaped layouts of rocks way too numerous to put a number on. There's stone walls with crystals in them, and winding rows of rock, short walls that seem to work with sun (are aligned to solar events?), etc." 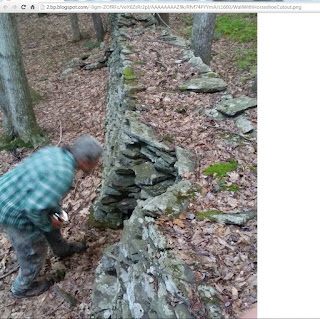 The wall segment photo shows part of a stone wall, also in very good condition. I don't spot any obvious (or even subtle) effigies in the photo, but wonder what might show in a different angle, such as face on. I've reconsidered several walls I'd seen with the same massive - and well maintained - sort of look that on closer inspection proved to contain some remarkable effigies. Note the trees around it are perhaps oaks (dead oak leaves on the wall too), high in tannic acid that often prevent the growth of vegetation. Having spent the better part of the last year making observations of some sometimes very obvious snake head-like boulders being present at the beginnings of many stone wall segments and at what might be called gateways in certain stone walls, I wonder both about the condition of the other stone walls and the presence of serpent head-like suggestions at gaps in the walls, noting that there are many "short walls" that may perhaps be serpent or snake-like in nature (such as in this flickr album: https://www.flickr.com/photos/34580529@N04/albums/72157651219553148  )
And I just don't know what to make of this one: 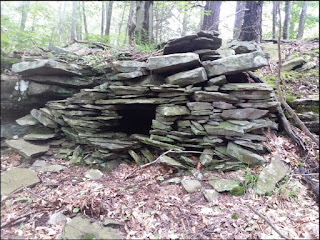 Posted by Tim MacSweeney at 7:48 AM