If anyone should ask me, “What is the oldest known documented and archaeologically proven stone structure in Massachusetts?” I would probably have to say that I at least think it was the Flagg Swamp Rock Shelter Stone Wall. 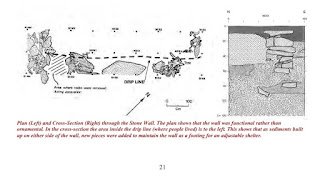 
“Just beneath the ground surface, the archaeologists encountered a stone wall. The wall followed the drip line from the western end of the rockshelter east about twenty feet, where it turned north to meet the rear wall of bedrock. It therefore enclosed the most protected area of the shelter. If your image of a stone wall is a retaining wall built by a landscaper or an old field wall built by some Yankee farmer, this is not that kind of stone wall. For one thing, the wall turned out to be, at most, only about two feet high. Another difference was that it was made not of fieldstones, but from large rock spalls. Spalls are pieces that split off the rock face when water seeps into cracks and freezes and expands, breaking off pieces of rock. This is the same way potholes form in roads over the winter. The archaeologists figured out that the stone wall was built after the shelter had been used for some time. They figured this out by excavating beneath the wall and finding features and artifacts there. That meant that those features had been created and the artifacts had been used and deposited before the wall was built. Based on the kinds of artifacts, the archaeologists estimated that the wall was built around 4,000 years ago, not too long after people first began to use the rockshelter. This is the earliest known stone structure in Massachusetts. 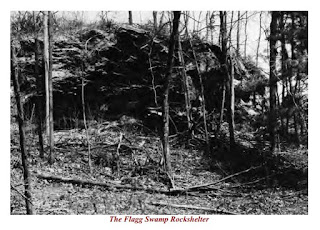 So why did people build this wall? Why not just toss all the large rock spalls farther away from the protected area (as most of them were)? Why build the wall so low? Why not build a higher wall to make the rockshelter more weather-tight? The most likely answer is that the wall served as a foundation. Wooden poles cut from saplings could be set securely against the base of the wall. The wall wouldn’t have to be particularly high for this. In fact, the reason the wall was as high as two feet was that as sediment accumulated inside the wall (and outside too), people added new rocks to the top of the wall to keep it above ground. The tops of the poles were leaned against the rock ledge at the rear of the protected area. These poles formed a framework over which people attached a covering of bark slabs, hides, or woven mats. The Native people of southern New England used bark slabs or woven reed mats secured to a framework of poles to make a wetu (dwelling). With bedrock shielding the northwest, north, and northeast, and a weathertight shelter wall to the south, people could be warm and cozy even during the worst weather of winter. A practical feature of this shelter was that it was adjustable. When the weather was relatively mild and sunny, the people could easily remove and set aside the mats and poles to take advantage of the rockshelter’s natural solar collecting properties. If the weather changed (as it famously always does here in New England), they could quickly reassemble the shelter to keep out the wind, rain, snow, and sleet that have always challenged New Englanders. 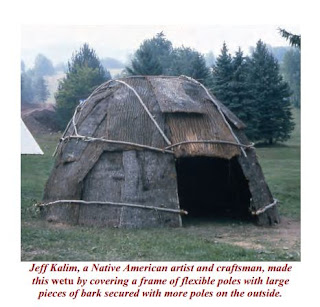 Visit him and his wife Judy here at their website:
http://www.primitivetechnologies.com/index.html

Inside the stone wall the archaeologists found dark brown or black soils rich in organic material. Within this living area were a wide variety of artifacts including dozens of stone tools and hundreds of stone flakes, the waste products of stone tool making. The tools included several varieties of spearpoints, knives, scrapers, drills or awls, hammerstones, and a fishing line sinker. There was pottery (broken pieces called ‘sherds’), and hundreds of animal bones, whole and fragmented. There were items made of shell, including a fishhook and a bead, and pieces of what might have been a shell spoon or an ornament. There were hundreds of fragments of nut shells, many of which were charred. There were many other bits of charcoal, left from cooking fires, and evidence of the hearths in which those fires were kindled.” 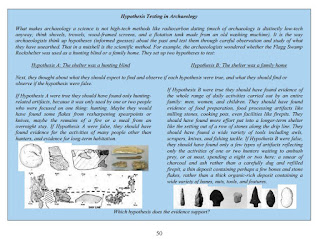 Since the results of the second phase of testing showed that the Flagg Swamp Rockshelter was a very important site, an important decision had to be made. The Highway Department and State Historic Preservation Office had to decide whether the site should be preserved and built around, or excavated and built over. Rerouting the road was not going to be easy. On one site was Flagg Swamp. Building the road through the swamp would be expensive and would destroy the swamp, which was a valuable natural resource for water quality, flood control, and wildlife habitat. Moving the road to the north would bring it through even more rugged terrain, greatly increasing the cost of the project. Since the Flagg Swamp Rockshelter was a small site, thorough excavation would not be prohibitively expensive. Because the archaeological study was done early in the planning process, the final dig would not delay the building of the road. But building the road through the Rockshelter would mean the end of the site forever. In the end, it was agreed that the site would be excavated and its information retrieved before it was destroyed. Archaeologists have mixed feelings about this kind of decision. While they would prefer to save the site for future archaeologists, they are thrilled to have the chance to excavate it themselves...In September (1980), as summer turned to fall, the archaeologists finished the fieldwork. A large portion of the site had been excavated—almost all of the area under the overhang and much of the immediate surroundings. Because the rockshelter was so small and was slated for demolition, it was feasible to excavate a large part of it. That fall, as highway construction began, the Flagg Swamp Rockshelter was dynamited..."

The entire article can be read here: 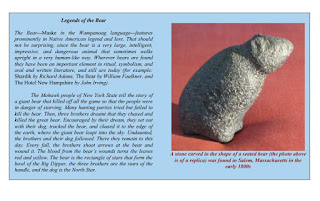 Posted by Tim MacSweeney at 5:52 AM