Down Below the Serpent 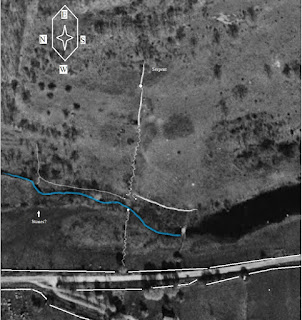 Enhanced Fairchild Aerial Services photo, above enhanced to show stonework
below the original with East at top - 1934 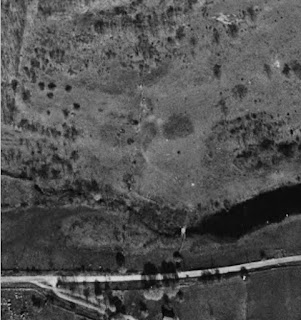 Sure, it’s just conjecture that the approximately 100 foot long segment of stone I was looking at the other day, shown below, is a Great Serpent {Up to the Serpent}: 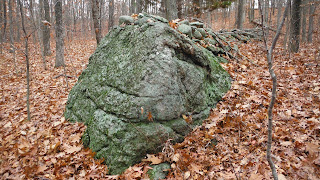 And it’s just conjecture again that, 400 feet below it, the stones are still just as they were for a long, long time, creating a "twisty little gateway" you might say, where three or so long lines of piled stones meet by that little stream called East Meadow Brook.
And that is a second attempt at an overlay above, amended as I was writing this, to include the “stone walls” along the road that most likely was originally an Indian Trail down at the bottom of this old photo.
The zigzag segments are sloppily done (I was drinking coffee). They are really more uniform constructions than those caffeinated squiggles, carefully built ten foot segments often connecting to triangular boulders, alternately facing north or south, the point of the boulder facing those two directions, more possible snake-like petroforms, entwined like denning or mating snakes actually do but with much more interest in cardinal directions and nice neat lines than actual snakes seem to be concerned with…
There is no remnant of that great big tree that shows its shadow by the present day roadside and the old stone wall that shows so clearly as a dark line in the old photo. That road has been reworked and repaved many times since 1934 and what wasn’t taken for use somewhere else was possibly just buried as fill was added. The east running line of stones is a zigzag segment that leads to the brook with a short bit of a linear segment in the middle of it. Where the row touches the stream is a big boulder partially hidden by a tangle of brush, but as the inset shows, bearing a suggestion of a possible snake head: 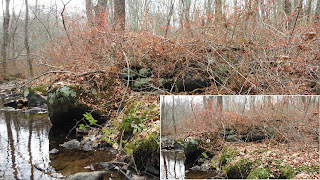 I think I may have been standing on that serpent head-like boulder when I took this photo in Feb. 2012, looking at this possible "twisty Gateway:" 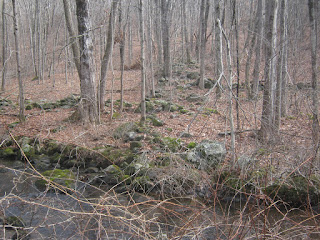 I don’t know (and will never know), but I wonder if there weren’t stepping stones in the water that connected the rows on both sides of the stream. Maybe further downstream there was a bridge or something where there is another squiggle of white (and a big white blob) in that ’34 photo. It will be in the plan of what to look at next time (and it looks like a possible path leading up to animal pastures on the steep hillside that I doubt was ever plowed).
I’ll have to look for a another stone wall that looks like a dark line in the 1965 photo: 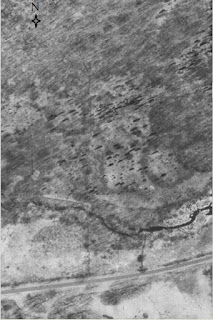 11/2015 looking east photo of the gateway – an overlay below and below that a computer drawn rough sketch: 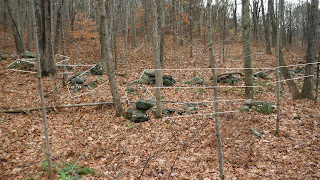 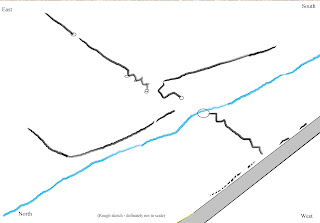 A bing image or two:

Looking East above and South below.

So, I’ll wait for the wind and snow to do some work and go back again sometime, sit and ponder again about the nature of this stonework…