Also Known as the Paugusett Path 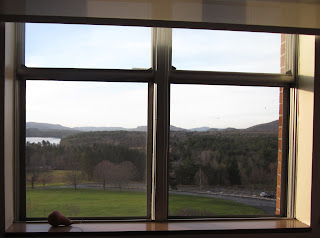 Travelling up and down the Old Moccasin Trail that became present day Route 7 twice within seven days was quite a lesson in Cultural Landscapes, even if one of the most important things I learned required nothing more than simply by looking south from the front door (or any south-facing window, as above) of the building we were staying in toward a certain mountain in the distance. The place my wife and I stayed in, right on the Stockbridge and Lenox town line was on a hillside where the view was more than just spectacular, now a Yoga Center, formerly an Ashram and prior to that a Jesuit Novitiate housed in a building that was built about the time I was born after the original Golden Age Cottage of a wealthy man whose name escapes me at the moment (Anson Phelps Stokes) was destroyed by an explosion and fire.


From Wikipedia: “Designed by architect H. Neill Wilson with landscaping by Frederick Law Olmsted, the mansion and farm buildings were built for Anson Phelps Stokes in 1893. Andrew Carnegie acquired Shadowbrook in 1917 and died there in 1919… sold in 1917 by Potter's debtors to Andrew Carnegie for $300,000…regarded at the time to be the second largest private residence in the United States.” 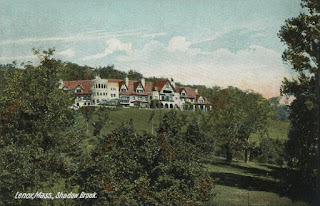 I’ve travelled that same route to Stockbridge and Lenox many times in my life and I’ve been long aware of the connection of modern highway to that Indian Trail widely known as the Berkshire Path, but it was another name I just happened upon that caused me a little surprise – more because it put into words something I’d already been thinking about that path and its relationship as a “High Place” (Place of Great Spiritual Power) to the Cultural Landscape I’m trying to gain understanding of, right outside my front door, sixty miles away. I found that the “Paugussett Path” is another name for the Berkshire path in book about Indian Paths called “Connecticut circa 1625 : its Indian trails, villages and sachendoms Published 1934 by the  National Society of the Colonial Dames of America in the State of Connecticut;Ingersoll, Elinor Houghton Bulkeley, 1893-; Spiess, Mathias.
{ https://archive.org/details/connecticutcirca00nati } The Paugussett, along with the Schaghticoke, are the Most Likely Descendants of the Indigenous People who created the Stone Features of the Sacred Cultural Landscape that I’ve been inspired to document and puzzle about as well as to be awed by its beauty and sophistication. When you get past the White Wash of the myth of the origin of stone walls in this Indigenous Homeland along the Housatonic River, see the remnants of what remains of an ancient sustainable system that is sometimes referred to as landscape domestication, you find something that should embarrass the pants off of any archeologist or anthropologist who clings to the belief that the stone walls and stone monuments along this Great River (and elsewhere in the North East) are “all and only” the result the agrarian endeavors of the last few hundred years. It is my sincere hope that these professionals, along with all those self-appointed “stone wall experts,” not embarrassed into becoming pants-less, will be careful when repeating the stone wall myths, half-truths and outright lies of the past will consider the consequences of repeating that sort of thing before audiences, knowing the danger of the old children’s’ saying, “Liar, liar, pants on fire.” 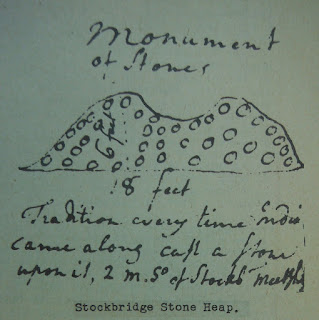 Monument Mountain is often mentioned by many people involved in Indigenous Stone Feature Investigations, even if it is recorded that the original Stone Monument is a pile of stones that recreates the original stone monument that was hauled away to build something else somewhere else. The stone monument remains to today, although I never have actually visited it, somewhere along the trail named for it. My friend Norman Muller seems to be the only person who has taken a photograph of it that I can easily find performing an online image search.
(Ezra Stiles wrote about this mound and sketched it in 1760, Eva Bulter refers to it in “The Bush or Stone Memorial Heaps of Southern New England,” Bulletin of the Archaeological Society of Connecticut (April 1946), 2-12). Peter Waksman uses Norman’s photo in: http://indianrockpiles.weetu.com/articles/RockPileTypes.html and Norman mentions the pile in an online work called “Stone Mound Investigations as of 2009” http://www.rock-piles.com/smi/) 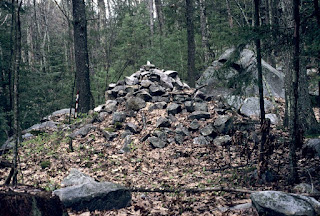 I don’t know exactly where I heard of the name “The Giant’s Stone Pile (Giant’s Grave) as an old name for Monument Mountain, but it’s stuck there in my memory. Was it an old book or maybe an old sign at the base of the mountain? I don’t know. Was it something my Grandmother told me as we passed by, on the way to somewhere else when I was just a kid? That possibility exists as well and I wish I could ask her, along with all the other Indian stories and legends she told me, possibly learned back when she was just a kid living near the old White Deer Rocks Road Fishing Camp where many other people have told me over many years that Indian People from all over the place would camp there during the summer, people she possibly met when she was young.

In my mind, the Giant’s Stone Pile is the talus east facing slope of Monument Mountain, on the opposite side of that peak from the man-made pile, huge boulders that have fallen over the many years since the glaciers (huge white giants of ice?) and the passing of time have carved the taller mountain into the present day one. I’ve always figured that the giant was that cultural hero of many names who survives in Indigenous Legends across the larger landscape of the North East, sometimes related to actual geological events that survive in story and illustrate the how far back the Indigenous memory of the landscape goes (Giants on The Landscape ) 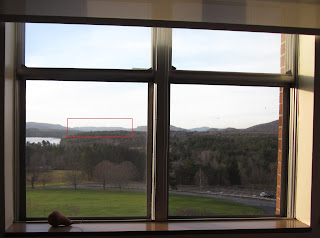 It wasn’t until just a few days ago that the story of the Giant suddenly leaped into a new perspective for me, seeing it and the other mountains in the “mountain scape” in the distance from Kripula or Shadowood (above). Similar in shape to the famous Sleeping Giant formation (below), I suddenly realized (although school children in the area may hear this early on locally) that Monument Mountain may well be another Giant, sleeping on the landscape… 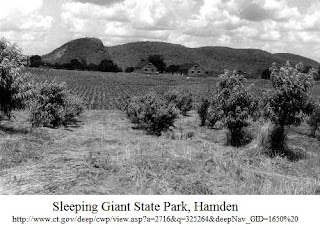 Posted by Tim MacSweeney at 3:51 PM