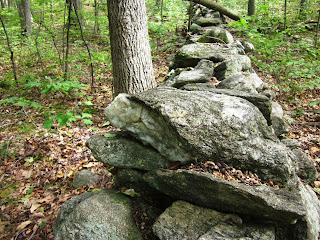 Here's a feature I'm always on the look out for, now that I've seen so many different ones in so many different places. It is what I call "A Single Stone Turtle." I suppose a "Turtle Carapace and Head Stone" might be a better description since I can't tell if this one may have once had some other stones representing feet, but the taxonomy isn't the point. Either is the question of whether or not this stone was found just as it is or if it was humanly enhanced (which might be termed 'sculpted'), although that is an important point. Someone at some time deliberately placed this stone on this row of stones just this way, I think, because it resembles a turtle.
As I've written before: "How did that archaeologist smarty pants put it? Find one stone bunny on Easter Island and it is nothing remarkable, but find a line of a bunch of stone bunnies all facing the same way on Easter Island and you’ve got something interesting. I may have remembered that incorrectly (N.B. - it was around the Modern American Easter Holiday when I wrote that), but that basically is some sort of definition of the method of Archeology." And I wrote it here where you can see other photos of similarly "placed just so single stone turtles" on some stone mounds:  http://wakinguponturtleisland.blogspot.com/2012/04/x-head-single-stone-turtles.html


(Here are two from that place, that post, so you can click on the link later - or not - I know you're very busy:) 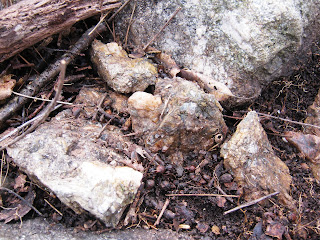 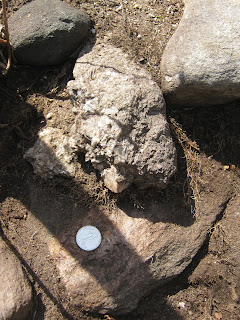 And, as a special bonus, here's one from a third location: 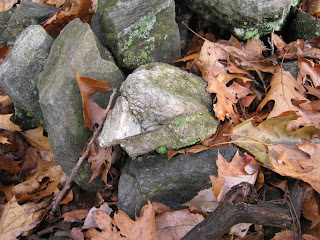 http://rockpiles.blogspot.com/2010/11/rockpile-on-hamburger-edge-of-hometown.html
So, to get back to the fascinating story of the first Single Stone Turtle at the top of the page, I'll show you a little bit more of the second remarkable circumstance involved with the Effigy that is culturally important to the People who considered themselves inhabitants of Turtle Island. As I step backwards here (or recreate stepping backwards to show you the stone row the Effigy is placed on), you might notice another culturally important figure: 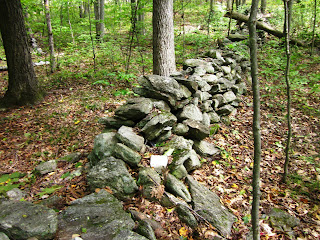 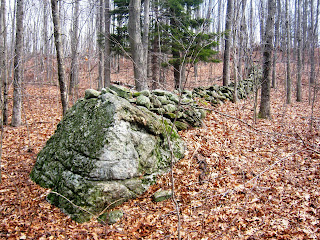 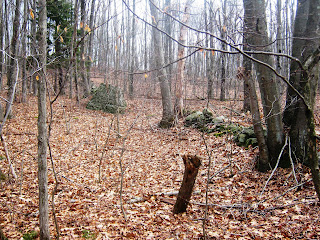 And as seen from above: 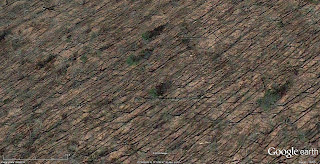 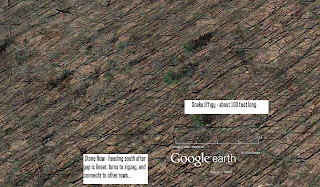 And here are photos from the first day I happened upon the Snake/Serpent Effigy:
http://wakinguponturtleisland.blogspot.com/2012/02/another-stone-snakeserpent-petroform.html

Posted by Tim MacSweeney at 9:39 AM