Using Primary Sources to Reconstruct the Past

Learning at the National Heritage Museum


Using Primary Sources to Reconstruct the Past; July 03, 2008 Lexington: Farming 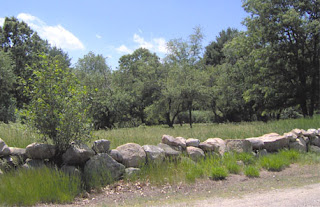 The primary source for landscape is the landscape around you. The ways in which humans have shaped the land has left its mark, and offer clues to past use and past values. This photo illustrates the typical modern appearance of land once used for farming in Lexington and surrounding agricultural towns in Massachusetts. In Colonial America, fences were commonly (said to be- Tim) constructed from stones gathered in line and piled two-to-three feet high, with tree stumps and timber on top fashioned into rails. These fences delineated property boundaries and fields, and contained livestock. As this purpose waned, so did the rails, leaving the rows of stones.

(Humans who lived here for thousands of years before the Colonials regularly burned the landscape they shaped, using stone rows to control the burning. The Colonials may have merely added the rails to the existing Indian constructions. – Tim)

In addition, tax valuations and assessments can help in drawing a picture of farms of the past for which no images actually exist.

Several texts exist that can guide you in reading and interpreting the shaped landscape of your local town. Some examples are: "Reading the Forested Landscape" by Tom Wessels, "Common Landscape of America" by John R. Stilgoe, and "Sermons in Stone: the Stone Walls of New England & New York" by Susan Allport.
(http://nationalheritagemuseum.typepad.com/learning/)

Posted by Tim MacSweeney at 9:42 AM