Here’s an excerpt of a typical sort of story about stone walls, “Stone Wall Wandering in New England” by Tim Jones, dated Nov. 5, 2010:


“Stone walls are a clear reminder of human history and the tremendous effort and determination of our forefathers to shape this land. I’ve heard it said that a rod (16.5 feet) of stone wall was a week’s work for two experienced men and a trained team of oxen. Calculate that times the thousands of miles of walls that still exist (some estimates say close to a quarter-million miles of walls once outlined New England’s fields, pastures and roads), and it’s an amazing number of man-and-animal hours.

When the walls were built (most between 1775 and 1850), the largest base stones were laid in a trench dug into the ground to minimize frost heaving. Then the walls were raise to the height a man could still easily lift the cap stones– about waist high or a little higher. The walls helped delineate property boundaries and contain wandering livestock. A couple of centuries of leaf litter and debris have built up around the stone walls you see today. Many are now probably deeper in the ground than they are high.

The next time you are hiking a woodland trail and it crosses a stone wall, turn and walk with the wall, to see where it takes you and what you find. Just be sure to keep track of the twists and turns you make so you can find your way back! 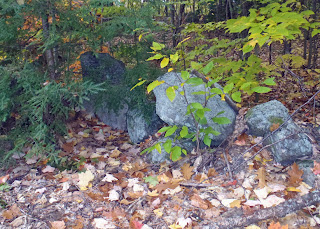 Tim Jones Photo
"Simple stone walls often mark the boundaries between field and pasture.
If you follow this one what will you find?"

Try to imagine what the land looked like when it was all cleared pasture and farm fields. (Nobody ever built a stone wall though the woods!) Was this wall just a property boundary? If so, it might not be as high or as well made. Was it designed to keep sheep out of a kitchen garden? Those have probably lasted…”

What troubles me about this article, and the great number of works about Stone Walls, is that the human history of the land goes back much farther than a few hundred years. The human history I am reminded of as I continue my life-long love of Stone Wall Wandering isn’t that of “our forefathers,” but that of those First People and their ancestors who lived here for thousands of years before that. This land was more “re-shaped” than shaped, these Stone Walls as well were often “reshaped ” or modified into legally defined fences, property lines and all the rest. Envisioning a past landscape, to me, goes back farther than European style farmsteads, pasture lands and farm fields.

Here’s a William Cronan quote from “Changes in the Land,” an essential “must read” book in my opinion about the differences in the European vs. Indian Cultural Landscape: “The earliest settlements had tended to be on land that was already cleared, whether by Indians, by the departed beavers, or by annual river floods. (Flooded lands, among the richest sites for agriculture, were the intervals so favored by colonial farmers.)” My local historian Mr. Cothren, in “Ancient Woodbury,” tells me that “our forefathers” quickly put these intervals into production of crops in 1672, the first year of occupation by a group of people who moved up river from Stratford CT, with the exception of the fields in the floodplain my front door faces because these were those being used by the inhabitants of the Nonnewaug Wigwams – and continued to be used into the first decades of the next century. 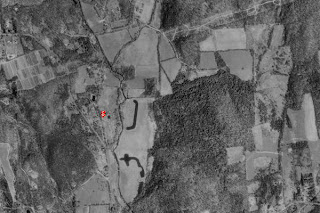 No colonial farmer would have had to have cleared what had already been cleared, yet there’s a great number of Stone Walls on the landscape, all explained away by a fable that by the time the earliest wooden fences were replaced by the Stone Walls colonial farmers began building with stone around the time of the American Revolutionary War and up until the invention of barbed wire. And people will explain away the great number of zigzag stone walls in the area as field stones thrown up against a wooden rail “snake fence” despite the fact that I’ve been looking for over twenty years for just such a haphazard collection of stones and instead find only carefully constructed rows, one of which turns into a linear row that ends with what maybe a large boulder modified to look like a snake’s head effigy… 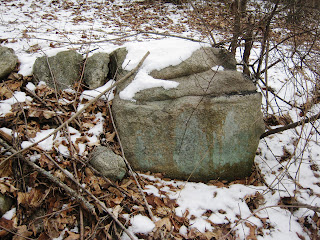