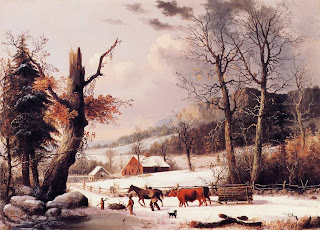 George Henry Durrie: Gathering Wood for Winter (New Haven CT) 1855
Found at  http://b-womeninamericanhistory19.blogspot.com/2010/12/snowy-19th-century-american-countryside.html
where there are more paintings of farmers gathering wood than building stone walls...
“Not contenting themselves with mere justice, the New Haven colony were also kind and helpful to their Indian neighbors. Take, for evidence and illustration, the following action of the town of New Haven concerning a field which the Indians desired to have fenced:


" The governor acquainted the town that the Indians complain that the swine that belong to the town, or farms, do them much wrong in eating their corn; and now they intend to take in a new piece of ground, and they desired the English would help them to fence it, and that those who have meadows at the end of their ground would fence it, and save them fencing about. Sergeant Jeffrey and John Brockett were desired to go speak with them, to know what ground it is which they intend to take in, and to view it, and see what fencing it may be, and give them the best direction they can. The sagamore also desires the town to give him a coat. He saith he is old and poor, and cannot work. The town declared themselves free that he should have a coat given him at the town's charge."

At the next meeting it was "Ordered, concerning the Indians' land spoken of the last court, that Thomas Jeffrey, John Brockett, William Tuttle, and Robert Talmadge shall be a committee to view the ground which they say is theirs, and to advise them for the best about fencing; the meadow lying against their ground bearing its due proportion; and that some men be appointed at the town's charge to show them how, and help them in their fencing; that so we may not have such complaints from them of cattle and hogs spoiling their corn, which they say makes their squaws and children cry."

At a later date it was "Ordered that the townsmen shall treat with the Indians, getting Mr. Pierson and his Indian for interpreters, and make a full agree¬ment in writing what we shall do, and what they shall be bound to; and let them know that what their agreement is, we expect they shall perform it."

In this agreement threescore days' work was promised' to the Indians toward their fence, and the town voted that the work "should be done by men fit and able for the work, and be paid for out of the town treasury."

Just and kind treatment of the aborigines was re¬quired of the English by politic prudence as well as by Christian benevolence. The action concerning the sagamore's coat and the fence around his land was taken in 1653, when, throughout all the colonies, these was some fear of a general combination of Indians against the English. New Haven does not seem to have felt any present distrust of the tribes within her borders, but the intermingling of neighborly kindness with orders for special military preparations and pre¬cautions suggests that the manifestations of kindness may have proceeded, not from pure benevolence, but from a complex motive in which prudence was a con¬siderable element (Atwater Chapter 15 pages 325 – 6).” 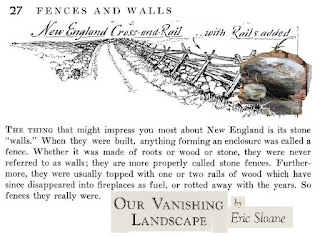 "If we turn to Dorchester (MA) in 1633, it is "ordered that for such as have great lotts they shall joyne together in paling (tr.v. paled, pal•ing, pales: “To enclose with pales - stakes or pointed sticks ; to fence in”)… then such as are beyond if they will pale are to remove to the last that will pale and he that will not to go without, every one that will pale to give in his name by to-morrow seven night."

That is, these fences separated Dorchester from the natural world around. An independent owner, who would not fence against the outward world, both giving and taking the protection of neighboring fields, must move out and must let a better communist approach to seek the friendly enclosure. Again, a particular locality " shall be forthwith enclosed by good sufficient Pale, and whosoever fayles shall forfeit his said lott." In 1633 they agree to run a double rail fence in the proportion of twenty feet to each cow. The largest owners had four cows and each set eighty feet.

There was much detail in enforcing these wholesome regulations. Fence-viewers were appointed, fines assessed and collected, etc. The New Haven 2 proprietors fenced together in a similar manner. New London8 in 1651 fenced a common field for planting Indian corn. Norwalk, Ct.,4 makes a drain in common in 1654, through "every man's lott in the meadows." Allowance is made to each proprietor for his loss of ground…

It was very generally determined that any timber felled should not lie and waste, but should be speedily converted into useful lumber. Hadley votes in 1660 that any one felling " rift" timber shall rive it into bolts, i. e. pieces for shingles, laths, etc., pales, rails, clapboards, etc., within six weeks, or any inhabitant may appropriate and cart it away."

"Fences.—The people of Hadley fenced the common fields, school meadow and homelots, and for a century not many other lots. The fences were chiefly of two sorts, (see page 41.) 1st, a fence was made of 5 rails with posts, about 4 feet high.

2d, a sufficient ditch was dug, (perhaps some were 3 feet wide and more than 2 feet deep,) and the earth was thrown upon one bank, and a line of posts with 2 or 3 rails was set upon this bank. This fence, from the bottom of the ditch to the top of the rails, may have been near 6 feet high. It is believed that oak and chestnut posts and rails were used; and probably some rails were pine. A few made stone wall for common fence, getting stones from Mount Holyoke and Mount Warner; and in 1747, a complaint was made that fence viewers passed brush hedge for common fence. Some private lots were fenced with logs in the last century. The post and rail fence continues. The ditch fence was used many years after 1800, and some had brush fence. 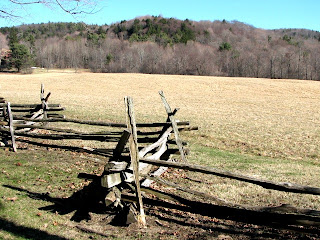 The crooked Virginia fence was observed by Kalm in Pennsylvania and New York in 1749, and called worm fence. It was made in some towns in New England where rails were plenty not long after that date. It was not very extensive in Hadley in the last century; has been more used since. The rails are of chestnut.

John Pynchon had four kinds of fence at Springfield and Suffield in the 17th century. The greater part was made of posts and five rails; other kinds were made of pales, of a ditch and dead hedge, and of a dead hedge alone. His rails, posts and pales were of white oak, and some of chestnut. His rails were 111/2 feet long and posts 6 or 61/2 feet. Carting rails from the woods in Springfield cost 4 or 5 shillings per hundred. Some of his ditches exceeded 4 feet in width and :} feet in depth, with a dead hedge on the bunk. Dead hedges were made by setting stakes in the ground 'Z or 3 feet apart, and interweaving bushes, limbs and young trees. These wattled fences were very different from common brush fences.

Page 41: Hadley ordered, in 1669, that Little Pansett fence should be made "with ditch, posts and two or three rails on the same," or as expressed in another vote, "with ditch and two or three rails on the same." The broad ditch and high bank of earth thrown out of the ditch, were an important part of the old common fence; they may still be seen on both sides of the river. The ditch was on the outside of the bank and rails, for the main object of the fence was to secure the meadows from domestic animals that roved in the woods on the outside.—Some of the meadow fences and perhaps most of the homelot fences were made of posts and rails without a ditch. Fences 5 rails high, and 4 feet 4 inches high, are mentioned on the west side. All fences were to be sufficient against horses, cattle, hogs and sheep.

Gates in common fences that crossed public highways, were uecessary appendages of the common field system, and were rather troublesome to travelers. Hadley had at first two such gates in the county road to Springfield, one called the mountain gate, near the end of the mountain, and the other, near the north-west corner of Fort Meadow. There were gates or bars in all highways into common fields, in the village and elsewhere. Bars were not common. If a person left open the gate or bars of a meadow, he was to pay 2s. 6d. Some meadow gates in county roads, continued down to the present century.

In 1663, every man was ordered to bound his land with meer-stones; and those whose land adjoined, were to be called, to see the meer-stones set down betwixt them." 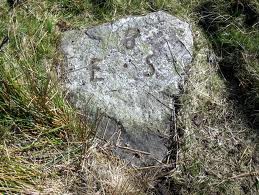 (2. Publications by English Dialect Society (1886):"The name may, perhaps, be derived from the fact of the field having been meered or measured off from the common lands. MEER STONE, s. a boundary stone. ...")

History of Hadley: including the early history of Hatfield, South Hadley ...

http://books.google.com/books?pg=PA440&dq=new+england++fencing+history&ei=YY_wTqGAB8Xg0QHTucSOAg&id=1q3RY7ns5-8C#v=onepage&q=new%20england%20%20fencing%20history&f=false
Posted by Tim MacSweeney at 9:37 AM