I can take a few educated guesses at just what the word Nonnewaug means.

In 1870 or so, Mr. William Cothren wrote, in his History of Ancient Woodbury: 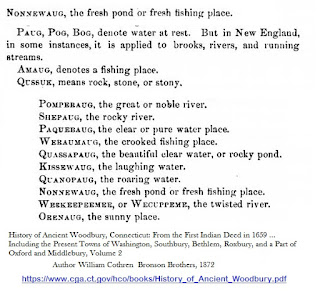 In 1960 or so, Mr. J.H. Huden came up with this way to sort of check up on these old translations: 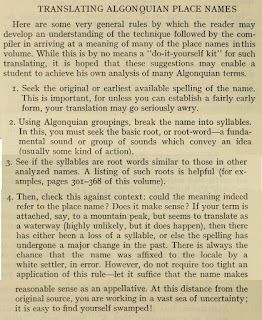 And there in Mr. Huden's book is a translation for "Nonnewaug" that seems to be a good choice when it comes to field checking the meaning of these "analyzed" Algonquin language words:

Mr. Huden is also nice enough to include a little "check your work" formula that actually uses a variant of a syllable "waug" in the first example he uses to explain: 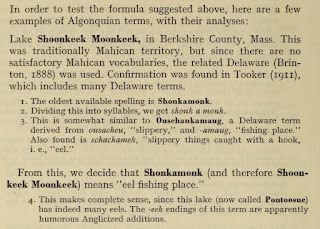 In case you missed it, "amuag" implies a "fishing place" in Lenape.
So I'm headed back into Huden (online), thinking perhaps that if I search for Paugussett and Quinnipiac words, I'll narrow my down my search by using each term as a "grouping" as Mr. Huden seems to be endorsing in his second step. I realize I can't easily "cut and paste" from this version of the text I'm viewing, so I capture these images and herd them into files in a folder on a flash drive. The "Nam/aug" file eventually looked like this, fishing and eeling places that could be, like Kissenaug implies, stone weirs composed of boulders: 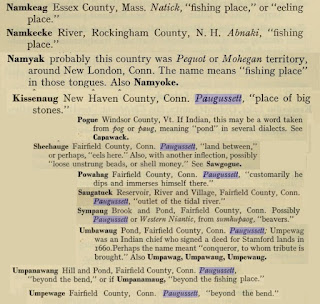 At the same time, I'm herding anything first syllable-like into a "nanna na na na" file, with some very interesting and intriguing possible translation results, including "place of safety" when thinking about those troubled and turbulent years of the 1600s: 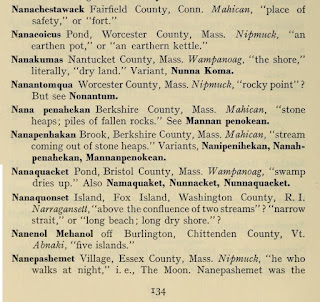 I've got a "napa" also, mostly for the eeling/fishing aspect, even if it is in a different but related Algonquin dialect sometimes: 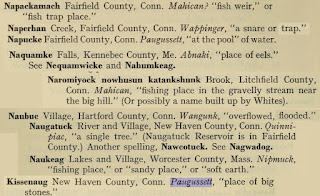 I've got a "paug ending" folder that seems to lean toward "dry land" a little. I pause to think of evidence of perhaps a glacial lake shore as a component of what I see out our front windows - or maybe a beaver pond that may have flooded the valley along that contour of the 100 year flood line that is recorded on some maps I have come across at different times.
And the 100 year flood I briefly witnessed, recreating that pond or lake...
The "- paug" ending: 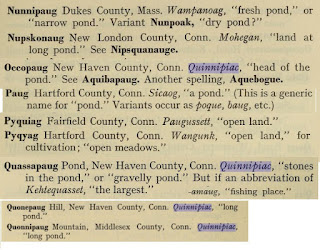 Nonnewaug physically includes “the Nonnewaug floodplain,” literally dry land that once was a glacial lake or a beaver pond. It was under cultivation by Indigenous People living at the Nonnewaug Wigwams in 1672 and up until 1740. There is also a now stranded and disturbed diagonal row of boulders in the river known as the Nonnewaug and perhaps you could say it was: “The fish weir farthest up the little river that joins up with the Great River at Pootatuck.” 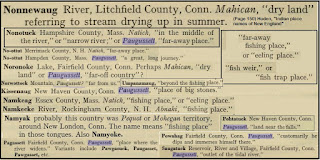