My best guess is that as a friendly gesture toward the Pomperauge Plantation, the Indigenous People, sometimes called the Pootatuck, who lived at the Nonnewaug Wigwams breached the existing row of stones along the Nonnewaug Path to build a house site overlooking the Village, its agricultural fields and the Fish weir that gives the place its name (looking at this a day later, I can also imagine that the People Who Lived at Nonnewaug circa 1673 - 1740 were possibly being paid to so so, but maybe not - I just don't know). Just as the road was bordered by Serpent Row of Stones on each side, so was the (call it a) cart path up to the house, the western side a boulder retaining wall with a gateway to the yard on either side of the house, centered on stone steps that lead to the door of the house. Just as many gateways feature a Great Serpent turning its head toward whomever is entering the enclosure beyond, so do these stone features around the old house whose builder and date of construction are unrecorded, as far as I know. 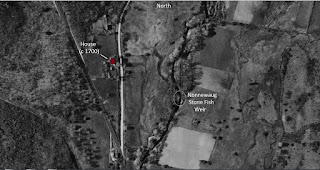 The Great Serpent can be a protective Spirit, having control over weather and water – and against the fires caused by lightening shot from the eyes of the Thunder Beings (Thunder Birds). I refer to the sideways looking gateway Serpents as Uktena, recalling the Cherokee stories about “the Strong Looker,” as the name translates to, a Spirit who sees your thoughts and knows your intentions as you enter a certain space. 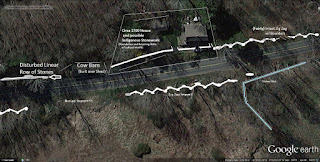 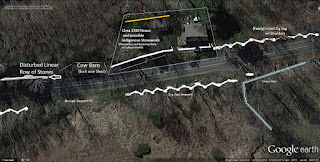 A Great Serpent guards the entry way to our house: 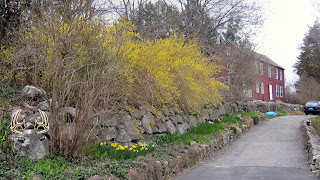 There’s three remaining rows of stones here at this end. At the left is the “retaining wall” or “terrace wall,” a petroform really, you could say, a Big Snake with its head turned, the Spirit Beings body stretched out and upward guarding the house, a trick of perspective making it seem as if it is one continuous row of stones.

But there is an entrance into the southern side yard of the house; as you approach that gap, another serpent can be observed: 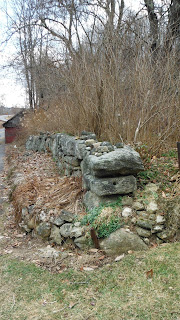 And another stretched out in front of the house: 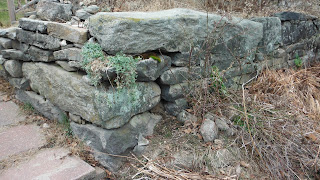 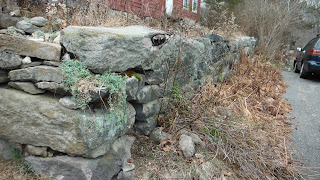 Back to the Gateway: 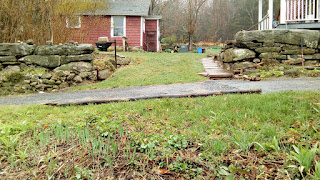 Unlike the segment of stonework on the left, the retaining wall to the right has had modern cement added to it, “pointed” I suppose in an effort to maintain it or something. All the cement really did was to allow water (and, in winter, ice) to build up behind it than to allow the water to seep through. Over the years that cement is deteriorating and the stones in the wall are pitching forward enough to be of concern. Thinking about fragments of possible levers in other old rows of stones I suspect to be Indigenous Qusukqaniyutôk or “stone row enclosures” (or even, adding an Algonquin word for Snake, “Askookqusukqaniyutôk).
There’s a sort of symmetry to this gateway above and below, if you are looking for a pattern of stacking and a cultural clue as to who built this stone concentration. 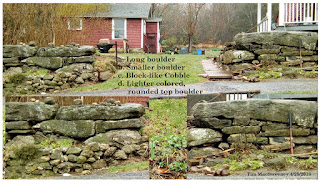 Over the years I’ve had quite a few thoughts about this retaining wall - who, why and when it was built. I thought it may have been the original chimney, reused for the wall back in 1850 or so, the cart path/driveway eroded down and compensated for – and I’ve never felt quite right about advice from stone masons who wanted to tear it down and rebuild from scratch in a proper style of stone wall. Henry Booth, that restorer of old houses, was the only one who said, “Dig out behind it and push the stones back into place.” He also added “My back hurts just thinking about it!”
So, all these years later, the grandkids and I are pushing stones back into place. But we aren’t thinking like the average stone mason; we are thinking of Snakes and Turtles as well as other Native American Icons and Effigies because this type of stonework strongly suggests an Indigenous origin, a moment of time when two cultures met at the edge of the Indian Frontier in CT sometime after 1673. 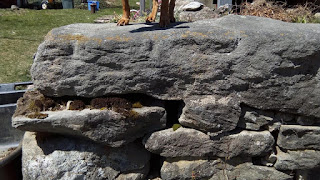 Above: Preparing to move the Lower Jaw
Below: A little lift with long sapling levers, inspired by the thoughts about

Wooden Fragments in the Rows of Stones 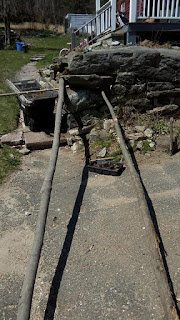 A Little bit of Roll: 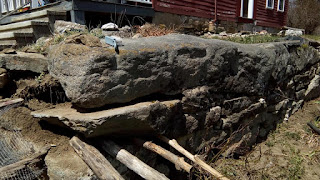 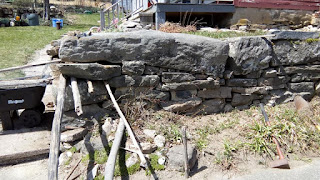 This is the tricky part, keeping the weight off of the smaller Serpent with the interesting face-like feature below the "Capstone" or Big Snake. Before the mortar was carefully removed: 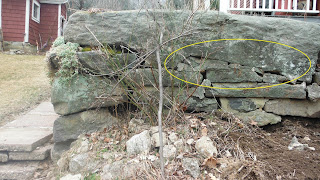 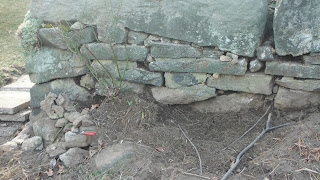 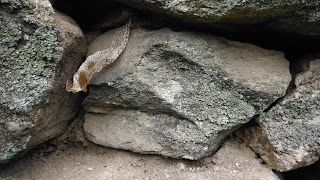 Posted by Tim MacSweeney at 8:51 AM