Sedentary lifestyle because of overcrowding (CA)

(I imagine it was much the same in New England - with stone snake effigy fuel breaks...) 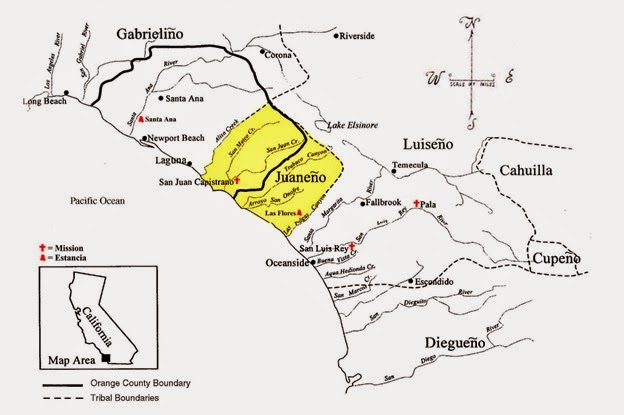 “Kroeber (1925; p. 601 and 636) described it this way for two tribes in southern California, ‘the Kawaiisu were pressed close against a variety of neighbours [Yauelmani, Yokuts, Tu¨ batulabal, Serrano, Chumash]…. The Juanen˜o Indians … were wedged in between the Gabrielino and the Luisen˜ o’. In fact, some have argued that the sedentary lifestyle of these hunter gatherers was forced upon these peoples because of overcrowding (Cohen, 1981). p306 Journal of Biogeography, 29, 303–320
How much land area was directly exploited by Native Americans? Kroeber (1962) considered no land was truly ‘uninhabited’, rather lands only varied in the intensity of their utilization, either for subsistence or other ‘customary purpose.’ Intensively utilized portions of the permanent geographical territories averaged approximately 85 km2 (White, 1963). Considering a typical settlement pattern (e.g. Fig. 5), it is apparent that a significant portion of the landscape was potentially influenced by the indigenous populations. This zone of impact would have likely varied dependent upon annual resource availability, expanding greatly during periods of drought (Shipek, 1981). This zone of impact has been described by Anderson et al. (1998) as follows: ‘Every part of the region had long been discovered, walked, or settled by native people by the time Spaniards first landed on the shores of San Diego Bay’. On the surface this may seem to be a bit over-stated, but perhaps not. For example the archaeological record in San Diego County has over 11,000 Indian sites documented, and the widespread dispersion of human activity is illustrated by the fact that these sites occurred within all thirty-two US Geological Survey (USGS) 7.5 min quadrangles studied by Christenson (1990) and on all fifty-nine soil types present within the Kumeyaay (Dieguen˜ o) territory. Christenson’s studies of settlement patterns showed that two-thirds were distributed in the coastal valleys and foothills and the remainder in the mountains. Average elevation was 750 m and 64% of the sites were located in what currently is chaparral or coastal sage scrub vegetation. On average, sites were within 135 m of a water source, although 74% of these are currently seasonal streams.
Despite the evidence of a dominant presence on the landscape, the rugged terrain throughout the coastal ranges makes it seem likely that there were remote areas left untouched by Native Americans.
Fire as a pre-Columbian land management tool: In contrast to much of the Americas, California Indians had not developed agriculture by the time of the Spanish invasion, which is surprising because such high population density and other cultural advancements are generally associated with agriculture in other parts of the globe (Diamond, 1997). Theories to explain this lack of agricultural development include limited diffusion of ideas/materials and environmental constraints of the Mediterranean climate (Bean & Lawton, 1973). However, it is likely that California Indians were not motivated to develop crops because they were extraordinarily successful at managing the natural resources available (but cf. Cohen, 1981).
Shipek (1977, 1981) claims that in southern California one of the important cultural resources was a religion that rewarded knowledge on how to increase plant and animal food supplies. Native American’s insight into these relationships is illustrated by their sowing tobacco seeds into post-fire seedbeds (Harrington, 1932). We now know that tobacco (Nicotiana attenuata, N. quadrifolia) germination is dependent upon exposure to smoke or charred wood, as is the case with the majority of chaparral annuals (Keeley & Fotheringham, 2000).
CONCLUSIONS
Indian burning in the California coastal ranges was not unique as Indians throughout North America used burning for a multitude of land management activities (e.g. Hough, 1926; Barrett, 1981; Pyne, 1982; Wickstrom, 1987; Boyd, 1999; Bonnicksen, 2000; cf. Forman&Russell, 1983).

Posted by Tim MacSweeney at 9:33 AM