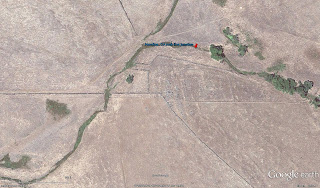 My friend Dave C. often sends me Google Earth images, like the one above, that show interesting details that stand out on satellite photos - from all around the world as well as Turtle Island.

Well, the image sent me on a little "Google Journey" - one showing me the documented Chinese rock walls near the place marked spot. This sounds like someone working for my Grandpa Tim: "Morgan Quick agreed to pay a Chinese contractor $1.75 for each rod (sixteen and a half linear feet) of stone wall. He also provided pork and rice for the workers. The contractor, who sat under an umbrella tracking construction progress with an abacus, paid his workers 25 cents per day IF they completed a rod and a half (twenty four feet and nine inches). The daily wage was lost if workers failed to meet the quota."
http://www.goldrushcam.com/2008/LG/sierra_sun_times%20linda%20gast%205.htm 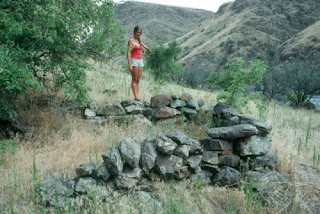 But the result that "got me" was the Department of the Interior's Bureau of Land Management website (http://www.blm.gov/id/st/en/prog/cultural/lower_salmon_river/historic_mining.html ) with the above picture of the obvious prayer seat/tsektsel, accompanied by this text:.
" The Chinese along the Lower Salmon River: Some of the places where past residents lived are still visible. These habitations were typically rock structures. The structure foundations average about 3 feet high, 6 feet wide, and 10 feet long. A wooden framework was constructed over the top of the rock walls. A variety of roofing materials were used. Most roofs were probably of canvas attached to a framework of milled lumber or driftwood. The wood was undoubtedly scavenged when the structure was abandoned.
Many of these structures had a fireplace. Generally, structures built by Euro-Americans had the fireplace in the wall opposite the entrance. Some rock structures built by the Chinese have the fireplace adjacent to the entrance. This architectural feature is unique to some structures built by the Chinese. The only other known standing structures with this unique architectural style are Chinese structures in some of the old mining areas located in New Zealand."

After seeing the Grey Feather Gallery of photos at Ancient Paths of Shastina (that I 'lifted' to illustrate this post http://wakinguponturtleisland.blogspot.com/2012/05/classic-example-of-prayer-seat.html), I (and probably Norman too) wonder what "the Chinese fire place/foundation" faces and what other features might occur around it that just might be similar to those Grey Feather photos at:


A photo I couldn't easily steal of a CA Chinese rock house can be found at:
http://www.goodyearsbar.com/chinese.php
﻿
Posted by Tim MacSweeney at 7:01 AM