Here's something I've never heard about before: using turtle signs and symbols to find trails to "treasure." The author includes "Turtle Monuments," possibly meaning petroforms, along a statement that says do not destroy these "artifacts." 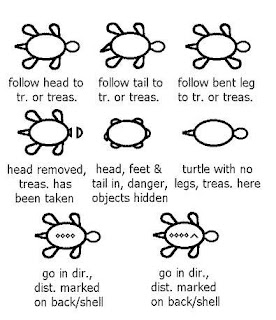 "Turtle Signs/Symbols...have been placed all over the world. They are used to give us directions, points to a trail or where the treasure is located. We have to carefully everything about the turtle's position of the head, tail legs or markings on its shell/back."

In addition to the turtle s/s there are also turtle monuments. These monuments will also be found out in the field. These are very large rock/boulder structures. The overall shape and positioning of the head, legs and tail, are the same as the s/s.
The following photograph (see web page http://www.treasurehuntersuniversity.com/turtle.html) is one such turtle that led to the finding of an old gold mine. The head of the turtle is pointing up and to the left. The crowned peak on the top of the head had a notch, that aligned with the beak. When these two were aligned, they pointed you to an area about 150 feet uphill. There we found a large crevice that was filled with large boulders that were used to conceal the mine's entrance.
Look closely, on the top right side of the center boulder, that makes up the back/shell, there is a carved shape of a heart. Telling us that this turtle will lead us to gold.

Do not destroy signs/symbols or any monument. They are artifacts and need to be kept as they are. So others may observe, follow and appreciate these wonderful works of art."

I got there from a disscussion forum I found called "Out of place triangle shaped rock," posted Feb 21, 2010, at http://forum.treasurenet.com/index.php?topic=301946.0 where treasure hunters are disscussing petroglyphs and graffitti on rocks, an interesting "bear" and someone asked "Would a turtle have been used as a cache marker on the east coast?  Today I found a scattered pile of stones with a hole dug down the middle, and what looks like a removed turtles head on the ground in front of it.  I know you guys out west find these all the time, but I have not heard of them in the eastern states. If it is the cache is long gone."