I'm not sure who wrote this article I came across, but it's called:

It links to something I'd used in a posting a while ago, an article by Doug MacCleery that was quite good.

In this one the suggestion is made that "If the Indians used methods such as the one described by Martin, above, the areas burned could have been even smaller," referring to the removal of grass to control a fire. I keep mentioning stone rows to contain fires here on this blog, so imagine that..


"This paper was written in 1984 while I was a student of Professor Arthur Lieberman at Cornell University. Professor Lieberman was then Director of the Cornell Tree Crops Research Project and taught landscape ecology in the Department of Landscape Architecture. This version was submitted to the international journal Agroforestry Systems in 1988, but never published there due to its length. A somewhat condensed version was later published in the 1994 Annual Report of the Northern Nut Growers Association (Volume 85). For a broader perspective on Native Americans' land management practices, see this online article by Doug MacCleery."

“IV. Ecological Aspects of Controlled Forest Burning
The term "controlled burning" is used advisedly here, considering the lack of specific information in the early accounts about how the Indians actually managed the fires they set, although Martin [52] cited one account of Indians uprooting the grass around the circumference of an area they intended to burn in order to prevent the fire from running back. Martin stated that "all other early references to Indian burning are unsubstantial" (i.e., unspecific), in making the point that the Indians were not the "irresponsible incendiaries" that some early colonists [20] and some historians [54] claimed them to be. Indeed, it is likely that in their thousands of years of experience with fire the Indians would have learned as much as (if not more than) we know today about how meteorological, vegetational, and topographical factors interact to control the course of a fire [93].
If the forest fires were set in November or April, as stated in nearly all the early accounts, the soil would have been moist, since these months typically have increased precipitation in the Northeast [69]. Furthermore, during these months very little or no water is being withdrawn from the soil by transpiring vegetation. Thus, a fire would have consumed only the dry grass and some or most of the dry leaves. Intense fires which destroy the organic soil layer or reach the tree crowns would not normally have occurred at these times of year.
Bodies of water such as streams, swamps, lakes, and rivers would have stopped a fire. Rocky ridges or hilltops, where grass and leaves would have been sparse, would also probably have stopped most fires in November or April. For these reasons, most fires probably would have been limited by natural factors to relatively small areas between streams and ridges. If the Indians used methods such as the one described by Martin, above, the areas burned could have been even smaller… 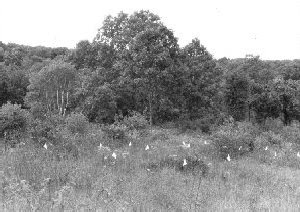 Figure 3. Research site at the Connecticut Arboretum in New London, CT. This area has been burned annually since 1981. Burning has slowed invasion by tree species. Species which have increased due to burning are low-bush blueberry, viburnums, arrowhead, huckleberry and sweet fern.

…Fire rotation times, or the length of time between fires [92], have been hypothesized for the oak and pine types [47]:
. . . fires may have burned at intervals of 3 years or less on the drier forested sites, at 1-year intervals in the grasslands, and at long intervals--100 years or so--on the wetter forested sites, at which times severe fires could have developed during drought periods in certain types . . .
A three year fire rotation time in the oak-hickory savannah would probably have maintained the type indefinitely [21]. Similarly, a one year fire rotation time would probably have maintained the grasslands indefinitely. If such were the case, the sequential agroforestry practices described in Section III would not have been very significant in extent, except perhaps on some of the poorly drained grassland soils which might not actually have burned each year. Less frequent burning of the grasslands, or use of fire breaks as indicated by Martin [52], would have allowed for establishment of tree cover on old fields. In any case, berry production and large bird habitat would have been byproducts of the grass and/or tree-covered fallow fields.
Moist forest sites on long fire rotation times would have added edge and wildlife shelter to the landscape. These areas would have been refuges for the smaller birds and mammals which were not adapted to the grasslands or fire forest [8], and for larger birds and mammals in hot weather and during winters with deep snow. The hemlock-pine stands typical of these areas [11] would have intercepted snowfall and allowed easier browsing. Areas with deep soils in moist areas would undoubtedly have grown some butternut or black walnut [30]; nuts of the butternut were especially important to the diets of Indians in northern parts of the Northeast [14, 63].
We will probably never know the actual extent of the fire-adapted oak-hickory savannahs and grasslands that the Indians created where the present day oak and pine types are now found, but their existence cannot be seriously doubted in light of the historical accounts and of modern research on the effects of fire on ecosystems. Periodic low intensity fires in November or April would have increased primary production of vegetable foods for humans and wildlife by 20-100% and would have concentrated the food production within easy feeding reach of large birds and mammals. Competition for these foods from rodents, insects, and fungi would have been reduced. Large birds and mammals (e.g., grouse and deer) would have increased 100 to 400% in the periodically burned forest. The Indians were doubtless very much aware of these beneficial effects of fire, and managed their environment accordingly.
The sustainability of the Indian agroforestry systems is of course open to question. But there seems to be no evidence that serious "leaks" would have developed, in the sense indicated by Harper [36]:
Agriculture deliberately channels energy and mineral resources out of one area into another and in addition it commonly creates "leaks" in otherwise self-maintaining systems.
Since soil would have been exposed to erosive forces only following very infrequent severe burns, and since nutrient losses would have been minimal or non-existent, no leaks of these resources should have occurred. And, obviously, there would have been no inputs (losses) of fossil fuel energy in the form of fertilizers, herbicides, or machinery fuel [64]. The only leaks would have been in the form of the food crops which the Indians harvested from their agro-ecosystems. it is interesting to note in this regard that historical records indicate that the Indian fields were able to produce crops of corn equal to or greater than the settlers' fields [83]--without use of draft animals or plows; these same Indian fields also produced crops of beans and squash which the settlers' fields did not…”
From:
http://www.daviesand.com/Papers/Tree_Crops/Indian_Agroforestry/
Posted by Tim MacSweeney at 11:57 AM