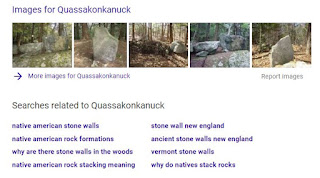 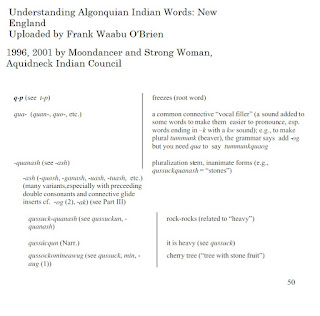 “There are other Rhode Island names which take their origin from having been descriptive boundaries in early conveyances...A pond in South Kingston, at the head of narrow river, was called Quassakonkanuck, which may connote "where the bound turns" (Quashau), or "the turning bound." Other boundary designations are derived from natural objects, such as trees, brooks, rocks, etc. These elements are frequently incorporated as components of such place-names. Quonocontaug pond, in Charlestown, as well as the village bearing same name, has been correctly translated by Dr. Trumbull as the "tall tree" (qunnuqui-tugk), which served as a landmark. Cocumscusset brook, or Cawcawmsqussick, as it was written by Roger Williams, is mentioned as a boundary in Coginaquand's deed to John Winthrop, Humphrey Atherton and others in 1659 (Fones Rec., vol. 1, p. 3, et seq.). This locality in the Narragansett country is historically famous. The name probably signifies "at or near the mark rock" (Kukuh-ompskqus-ei), denoting not the rock itself, but the land in its neighborhood. Wannuscheomscut, in which we find the elements Wannasque-ompskq-ut, is seemingly the actual name for the rock itself, meaning "at the ending rock," as it is noted in the same deed as an alternative with Cocumscusset. Another boundary in this deed is called Petaquamscott, "at the roundrock" (Petukqui-ompsq-ui), which remains to this day a well-known landmark, near a river bearing same name in South Kingstown...”
INDIAN GEOGRAPHIC NAMES, AND WHY WE SHOULD STUDY THEM; ILLUSTRATED BY SOME RHODE ISLAND EXAMPLES.
Abstract Of A Paper Read Before The Society, March 25, 1897, By William Wallace Tooker, Esq.
Rhode Island Historical Society (Page 212 1897)
https://books.google.com/books?pg=PA212&lpg=PA212&dq=Quassakonkanuck&sig=1oqgbQGHF2VDyBSAwZ7xLfOcyE0&id=FpQbAQAAMAAJ&ots=vwCf2XbR1V#v=onepage&q=Quassakonkanuck&f=false 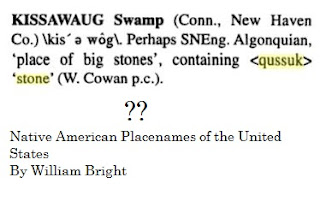 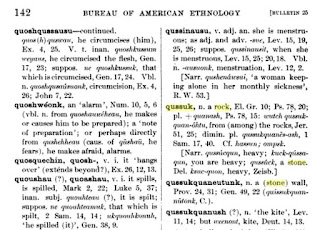