or
The Kid with the Snow Plow

The kid with the snow plow suddenly stopped back plowing and instead pushed all the snow up into the stone wall along my driveway. I stopped shoveling out the three cars and struggled through the drifts, waving my arms but he backed up and rammed it again. I stumbled out into the road and knocked on the window, let him know I didn’t want a 300 year old wall knocked apart. 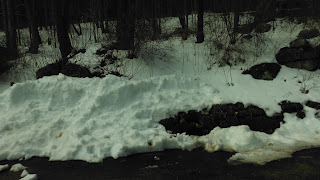 So as the huge pile melts, exposed stones absorbing heat from the sun, I’m looking to see what damage was done – the amount of snow may have prevented a direct hit by the plow itself and I am hoping what is still under snow looks as fairly intact as the little bit I can see today.
But the second surprise was the stones that just happened to be the first I can see: 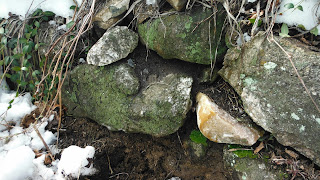 I have really only recently been paying attention to this wall as an Indigenous-made stone feature, stonework of the Nonnewaug band of the Pootatuck, who during Contact Period times lived across the river from this house of undetermined age. Dr. Curtis Hoffman stopped by for a quick look one time, skeptical at first but soon agreeing with me about the Native American Iconography – lots of snake and turtle artwork imagery. There’s some snake-head-like qualities to that stone above that were suddenly apparent – in fact it greatly resembles another probable snake-head-like stone a few miles away: 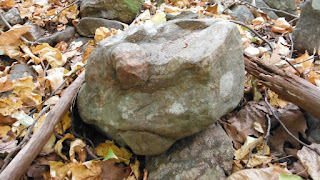 So I look up, thinking about the black and white stones combination of a recent post at RockPiles:http://rockpiles.blogspot.com/2017/03/behind-grocery-store-watertown-ct.html}. 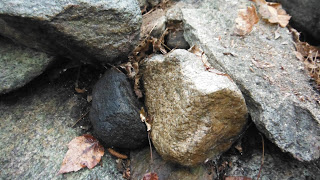 I picked out two small stones in the flower bed below the end of this retaining wall, placing them where they are in this photo below: 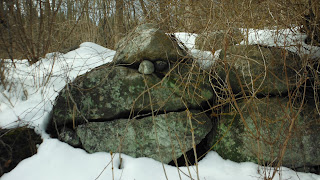 Turtle maybe, probably, definitely but it’s also a snake, right? Images and images within the images, multiple images - that's also a diagnostic of Indigenous Stonework in many places. Aren’t those jaws?? And if that’s a spot for an eye, then wouldn’t the black stone be a pupil, the white stone becoming the obvious “White of the Serpent’s Eye?” What if I switch them?? Would it make the Stone Serpent "come alive??" 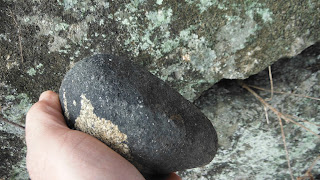 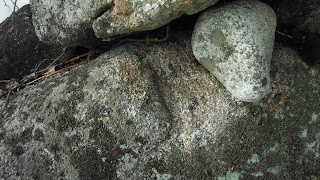 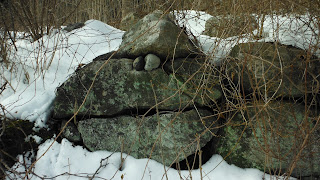 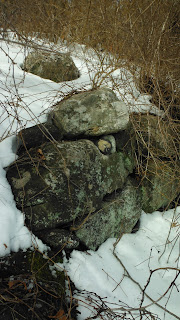 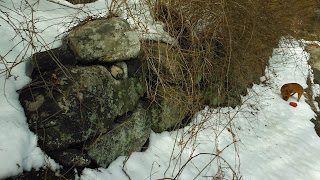 Posted by Tim MacSweeney at 1:51 PM