Stone by Stone (Segment One) 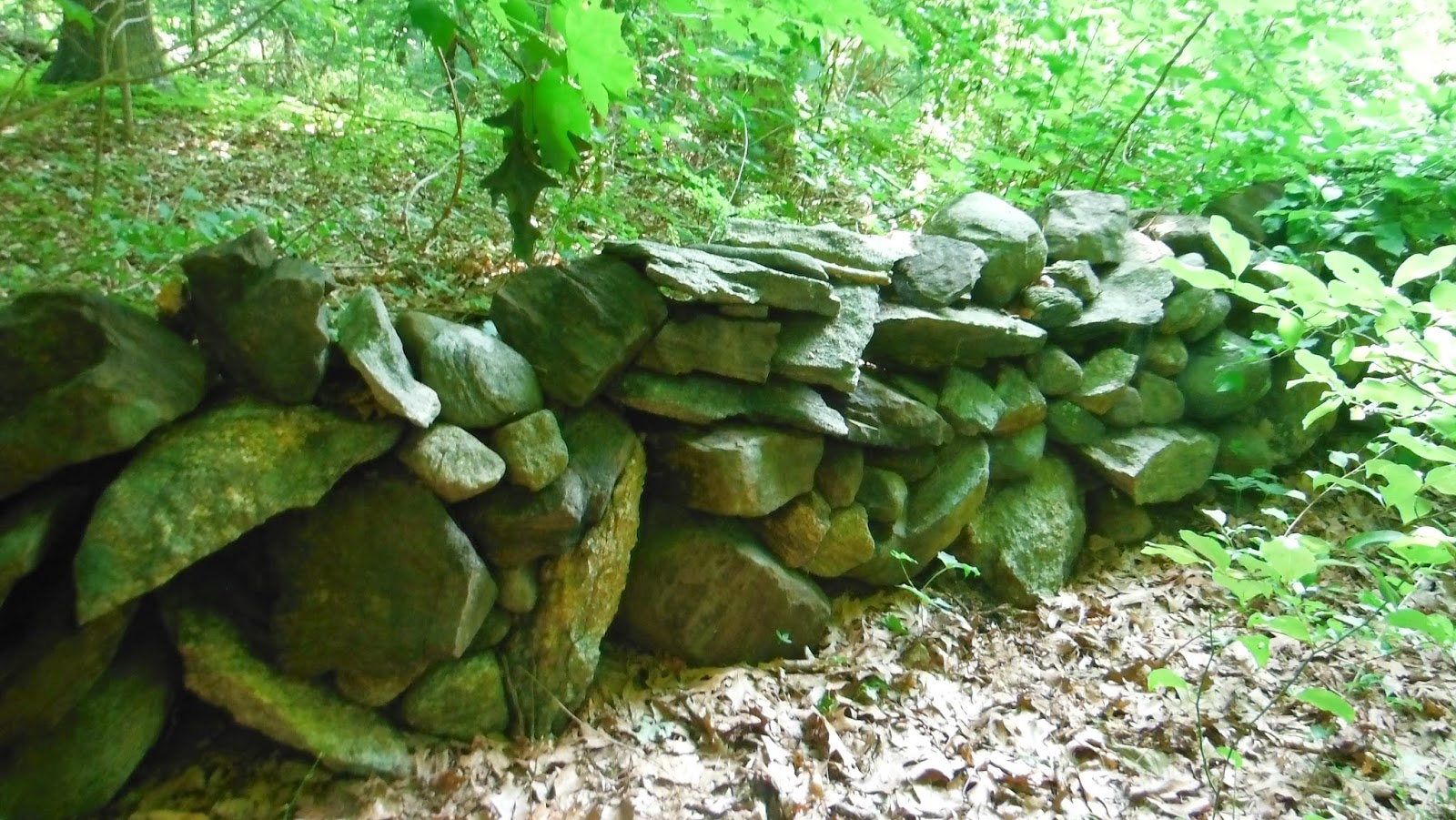 I didn’t want to read “Stone By Stone” while on a little vacation in Westbrook by the Connecticut shore, but I did. My mom’s neighbor had just recently read it, continues to re-read it and then left it on my mom’s dining room table for me to read even though I said it would probably just make me mad. As much as I love the geological stories Robert Thorson tells and respect his geological knowledge about geological geology, I get a little angry that he minimizes the “footprint on the land (scape)” of Indigenous Peoples who lived here on this corner of Turtle Island since the retreat of the glaciers. Happily, it turns out that I did read it and got a nice little quote out of it, that mentions how a stone wall can be a “firebreak,” also called a "fuel break," something I suggest is one of the functions of some of the remnants of Indigenous Stonework I see, detected or diagnosed by Indigenous Artwork incorporated into rows of stones. Perhaps that might make a good name for it: 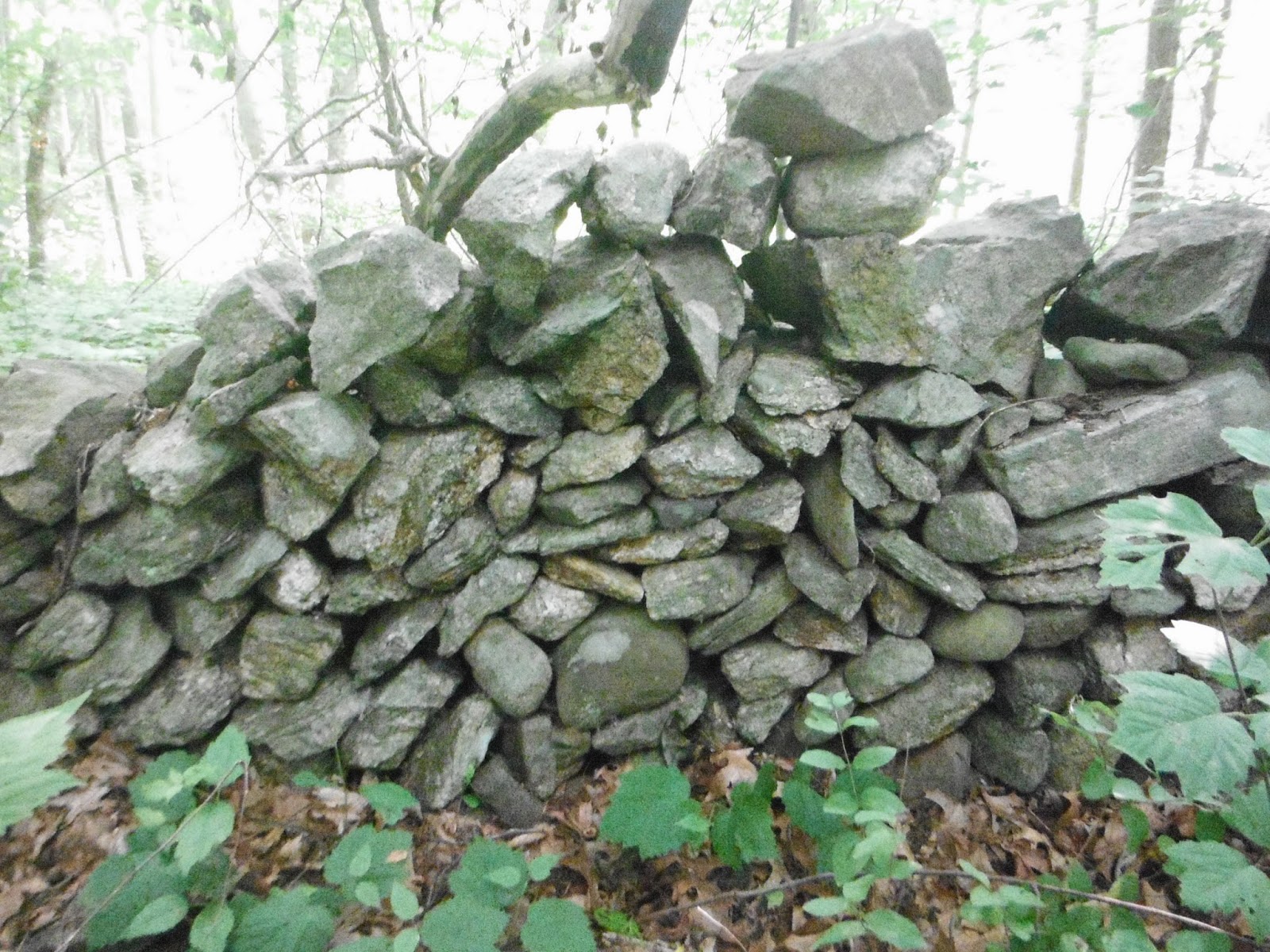 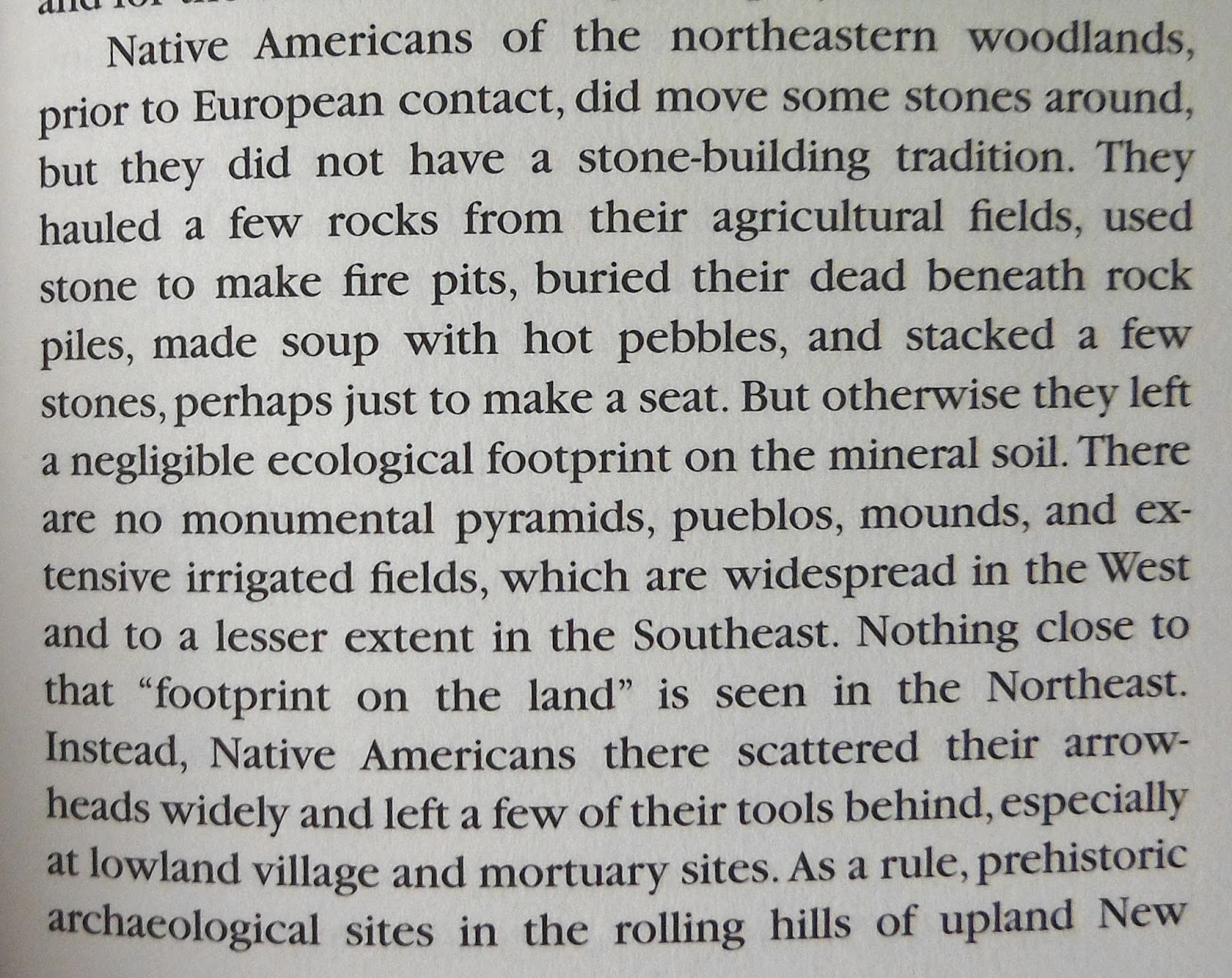 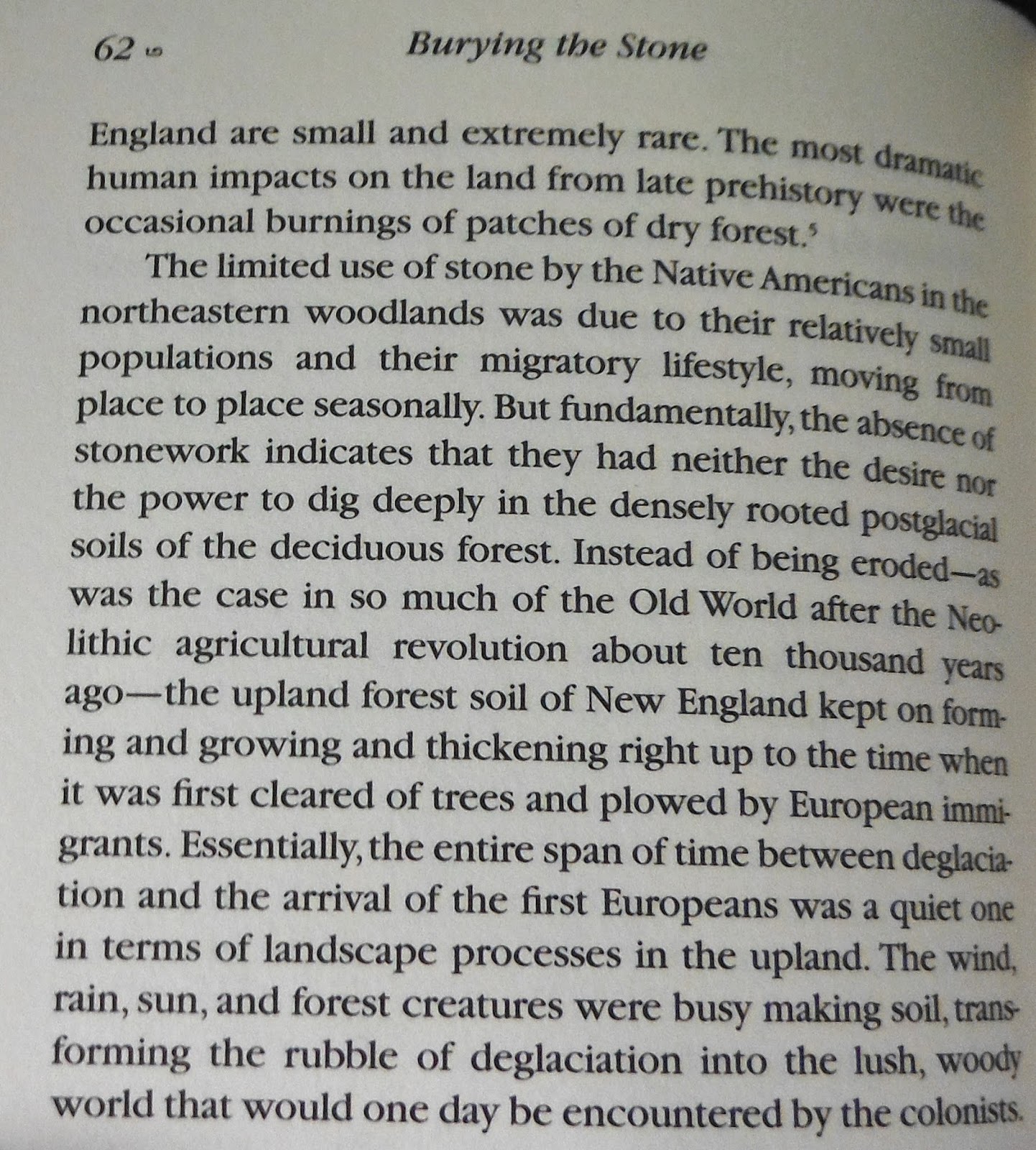 I had already taken a couple short walks during that vacation week, revisiting some places and taking a quick look at some rows of stones I don’t remember looking at before. I came across a fine example of what is probably a box turtle with a beautiful striated high domed carapace and a particularly nice left front foreleg that shows three toes – possibly, I mean, being an amateur such as I am. 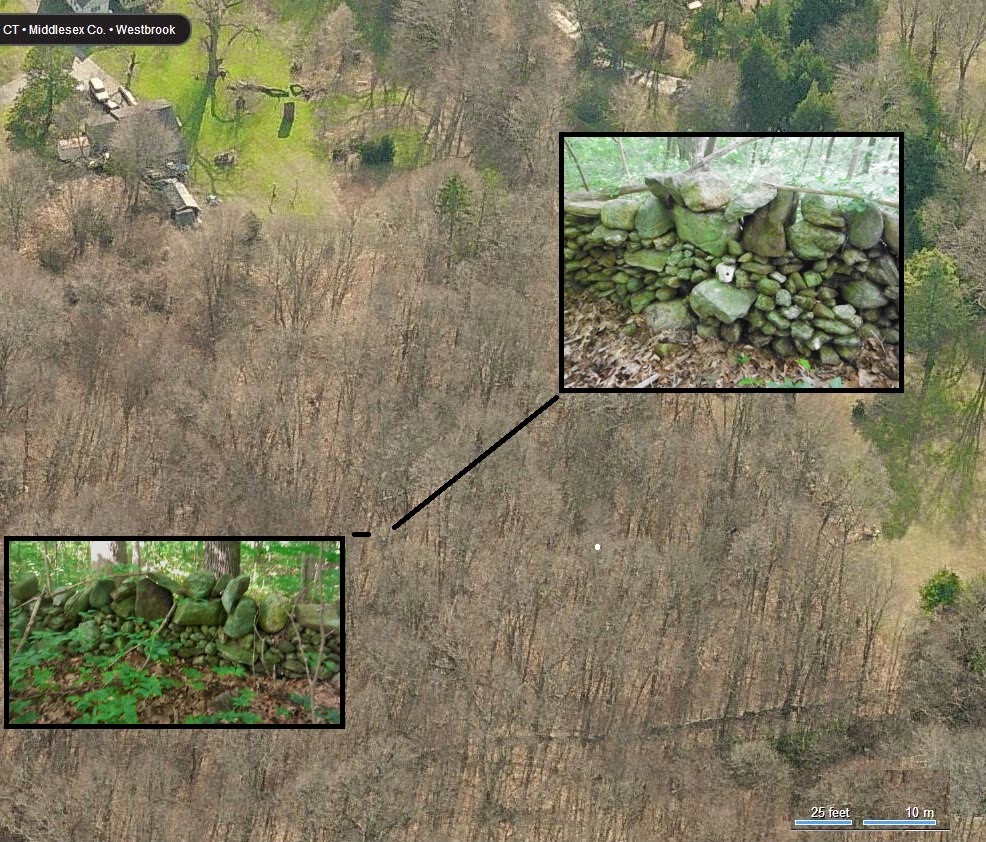 I had simply walked into the little wooded area behind my mom’s barn to find this Petroform on this row of stones, although I must have passed by it quite a few times before without noticing it. The white quartz stone caught my eye this time, prompting me to look closer… 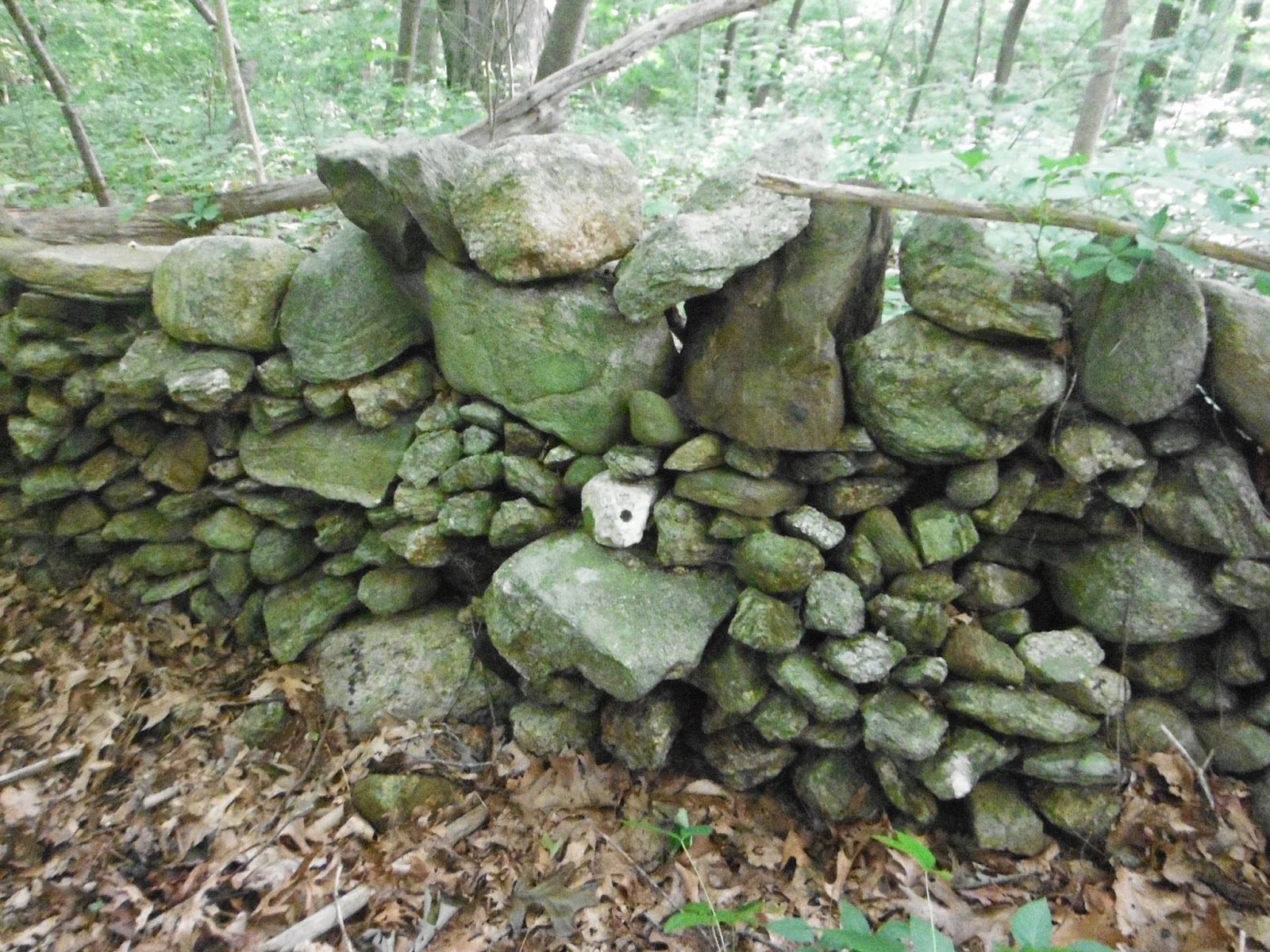 Conventional wisdom calls this a stone wall created sometime after 1630 something (my mom’s house is dated to 1760, built for a local ship builder named Hayden) when refuse stone was tossed during field clearing or then rebuilt from a messy pile of stones into this form later on. I think otherwise; I see Indigenous Stone Artwork that is probably much older and artistically stacked.
And, as I’ve said before, “the Turtle is the Key to this Language of Indigenous Stone Artwork of Turtle Island.” There are multiple testudinate effigies in this segment of stone – and possibly other animals, possibly more that I don’t really understand, but this one with three well defined toes is a good example: 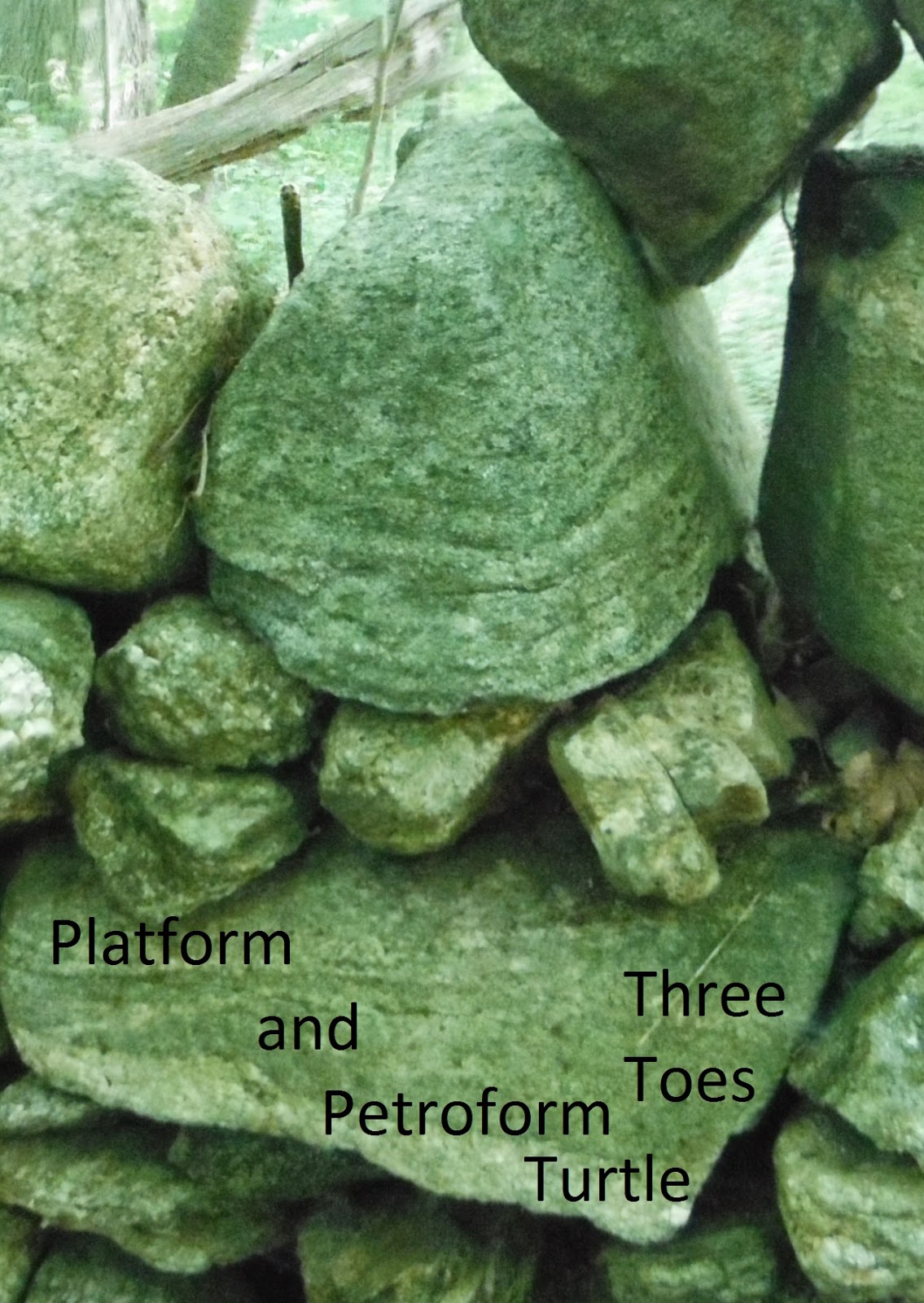 Widen the view and there just may be another turtle petroform beside it: 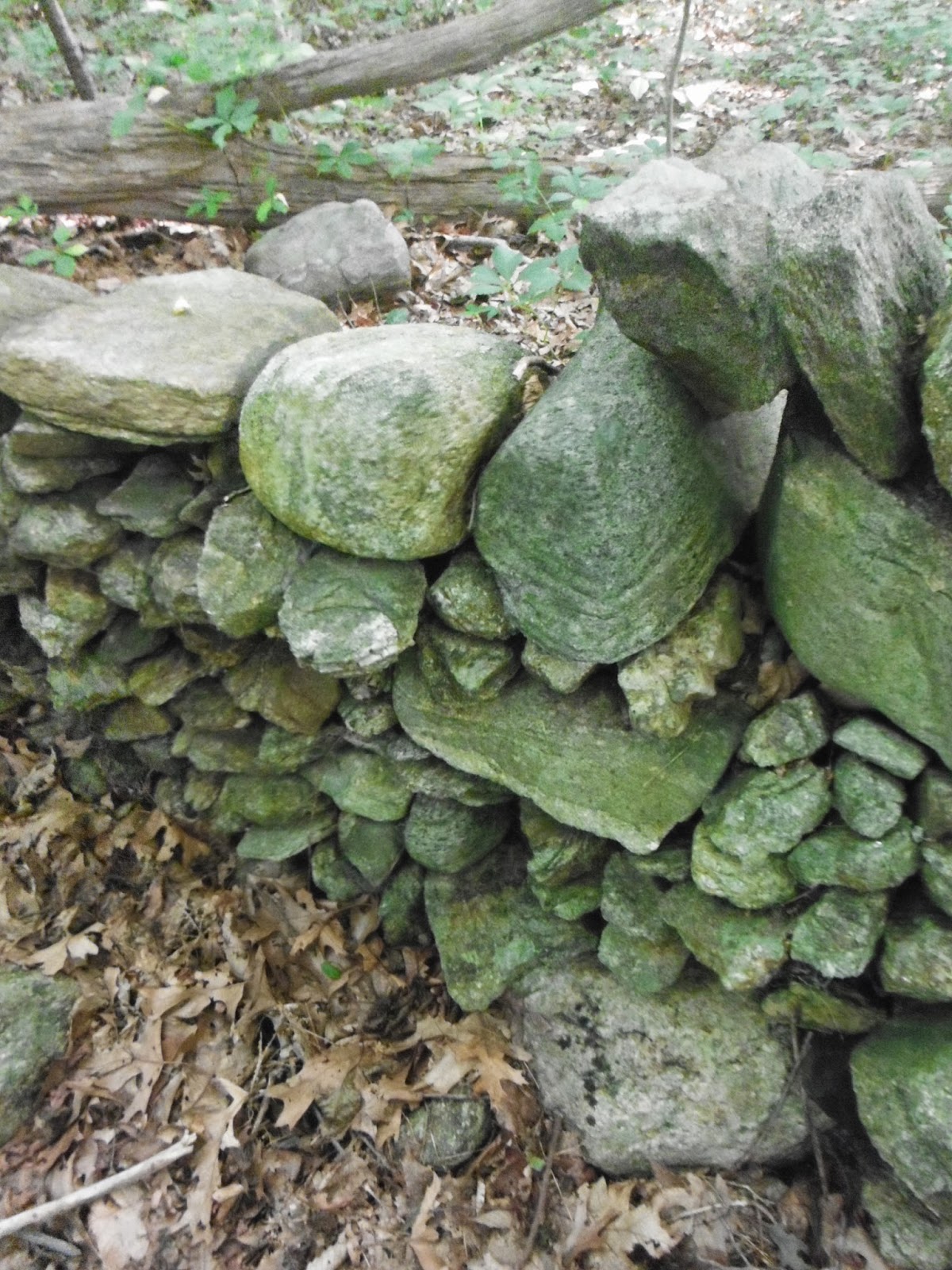 And another suggested beside that one, the suggestion of two toes on two suggested forelegs: 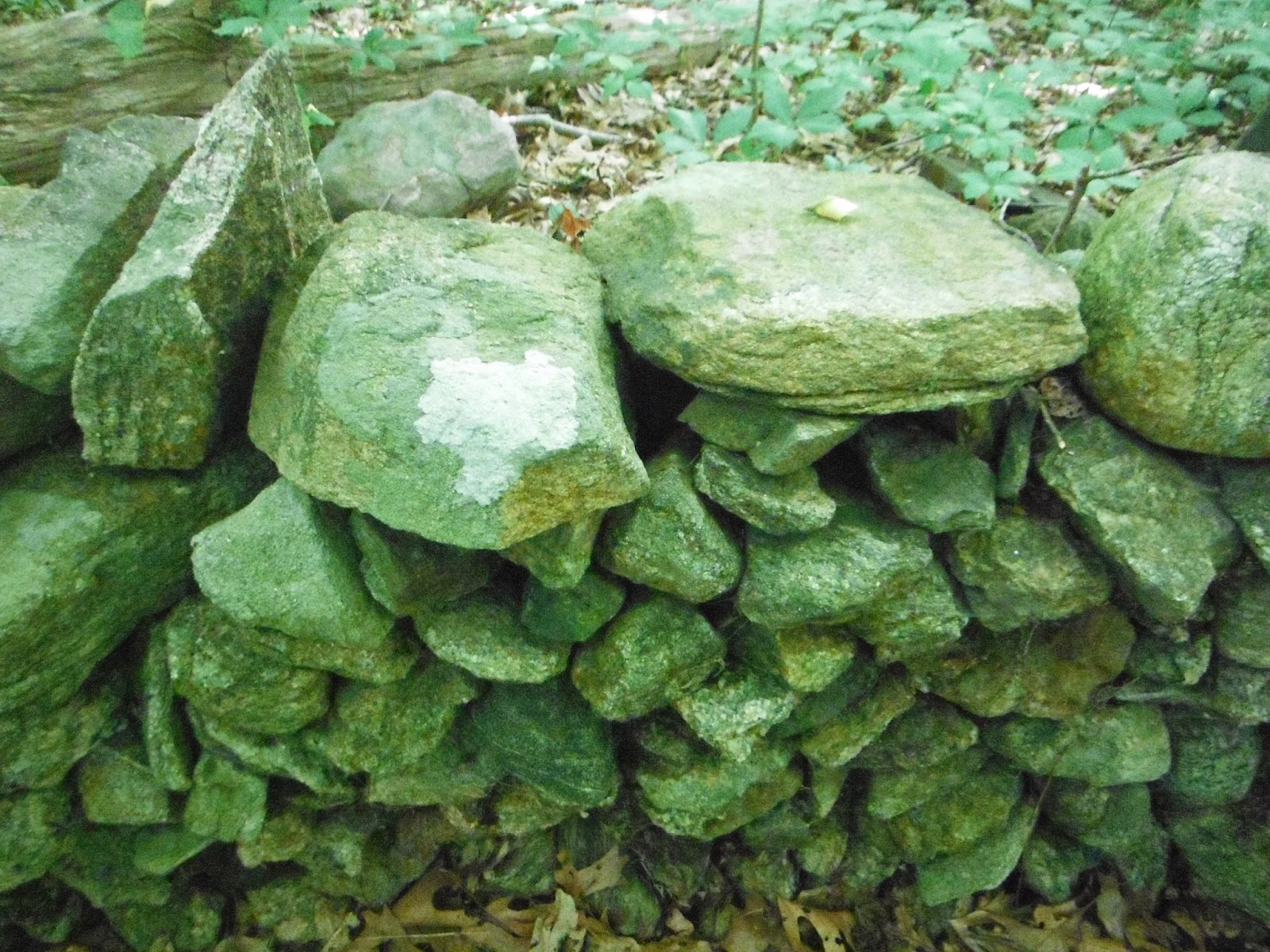 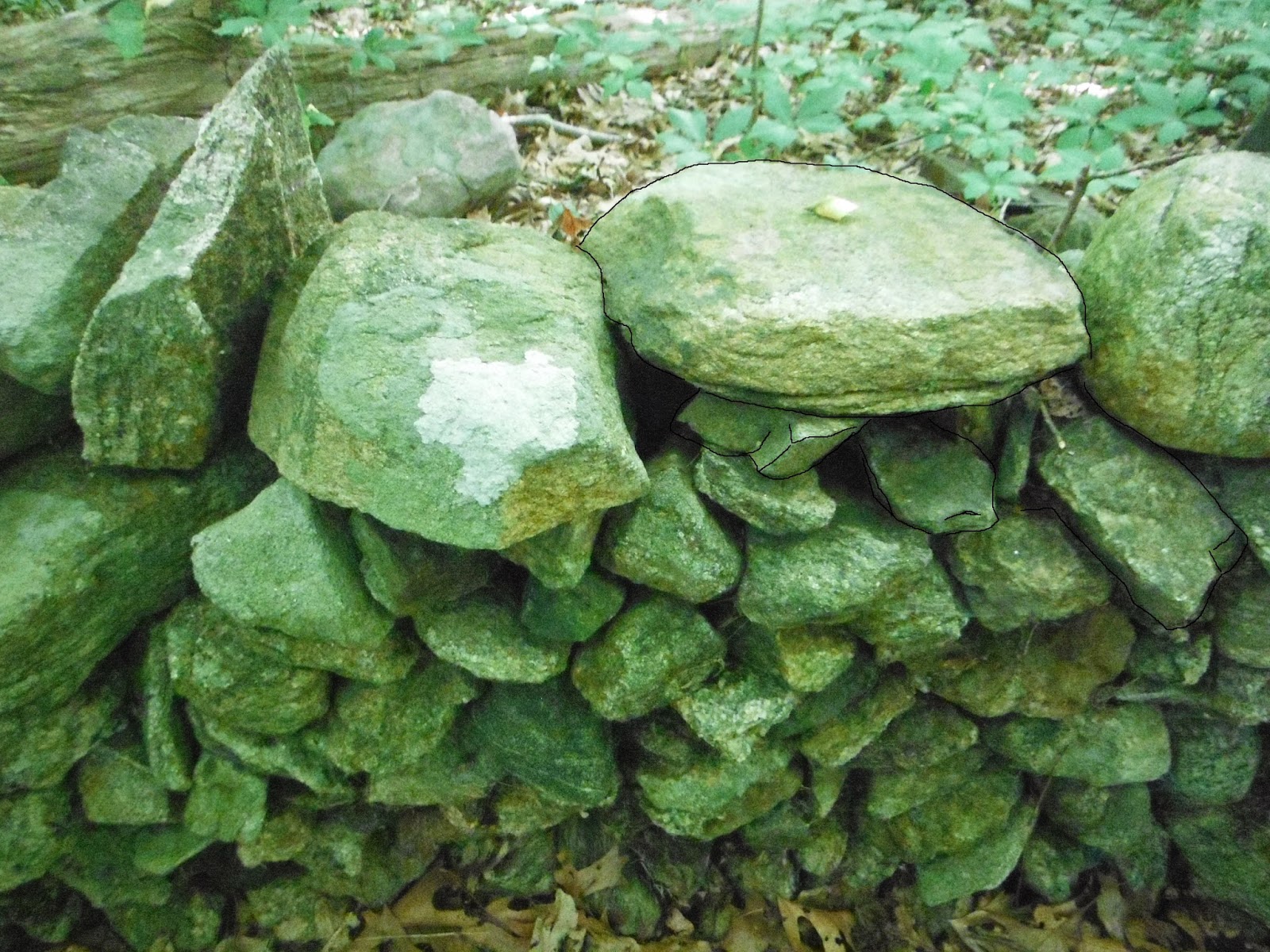 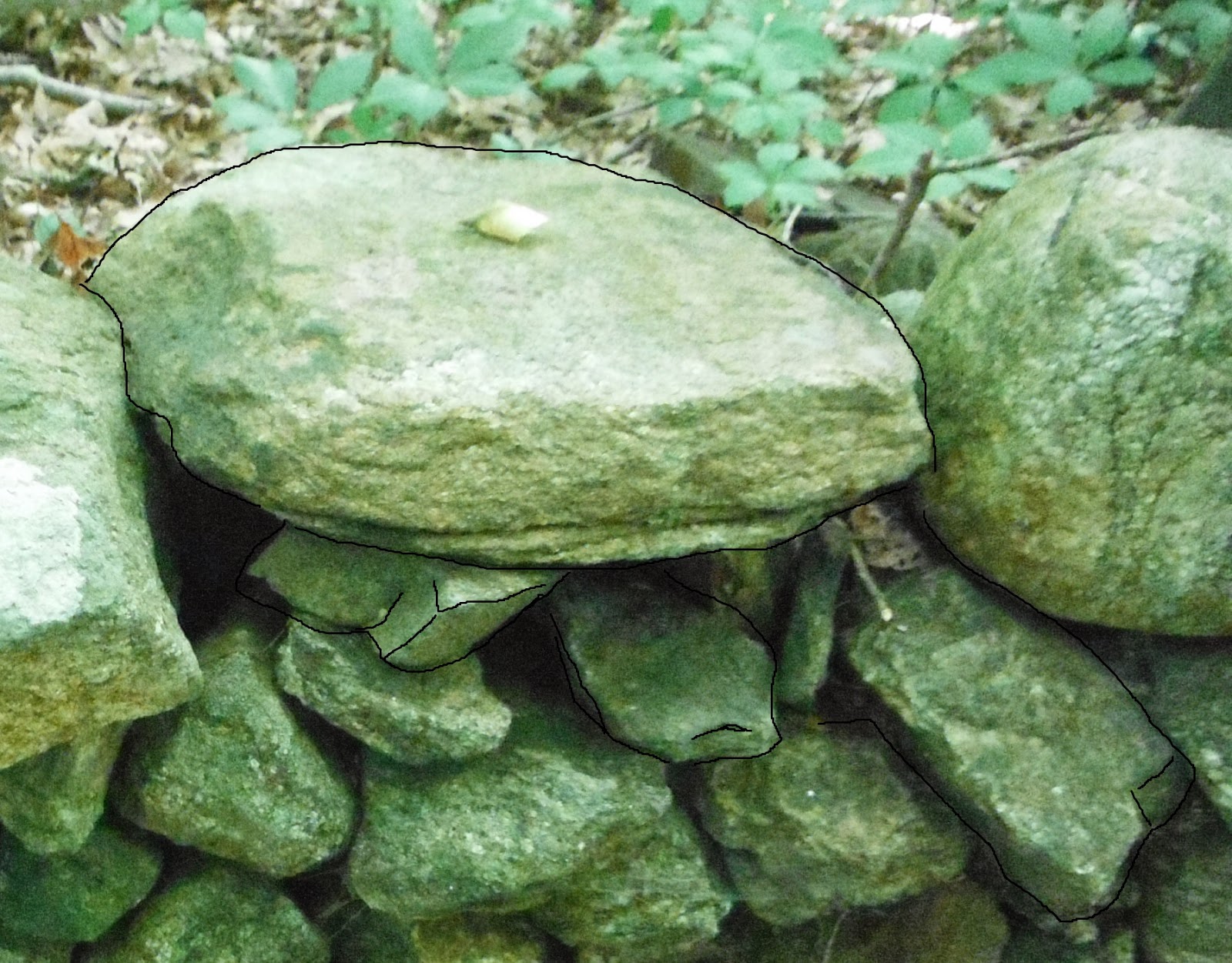 And as I ponder how to close this out, just what to say, how to convey that I see remnants of an ancient Sacred Stone Landscape that blended in with, enhanced the natural, tended agriforests or "Tree Gardens"  and patches of this and that, a Sacred Landscape amid the modern "developments," road scars and stripmalls. I’m supplied with a quote that a descendent of the Barkhamsted Lighthouse Village has just posted to Archaeological Society of Connecticut’s Face Book page: “Changing worldviews is not easy and usually avoided by both the individual and society (stay in the comfort zone). However, to not accept those intensive farming Native Peoples as first and foremost horticulturalists, then we continue "teaching" about Native Peoples at the expense of Native Peoples; teaching such skewed life-ways not to the true benefit of the society focused on by an exhibit or for real historical perspective a book claims to offer, but to the benefit of the audience's thirst for the "primitive." - Jessica Diemer-Eaton, “a historical interpreter of Native American lifeways, and owner of Woodland Indian Educational Programs (www.woodlandindianedu.com). She provides educational programs for students, public programs for museums, Powwows, and historical events, as well as interpretive workshops for museum staff.”
http://voices.yahoo.com/primitive-labeling-inhibits-interpretation-historic-11585234.html?cat=37

Oh yeah - my fuelbreak/firebreak quote from Stone by Stone by Prof. Thorson: 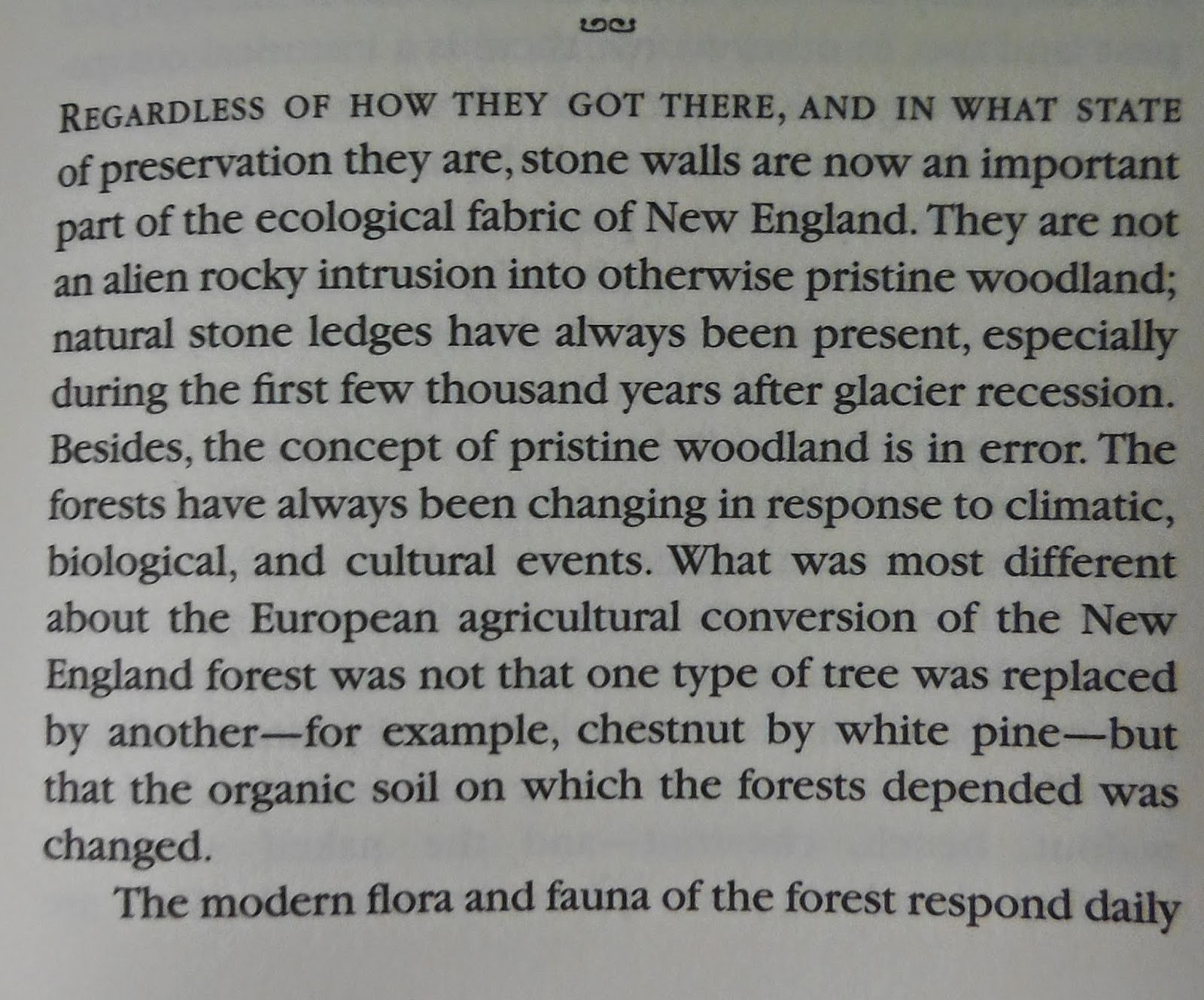 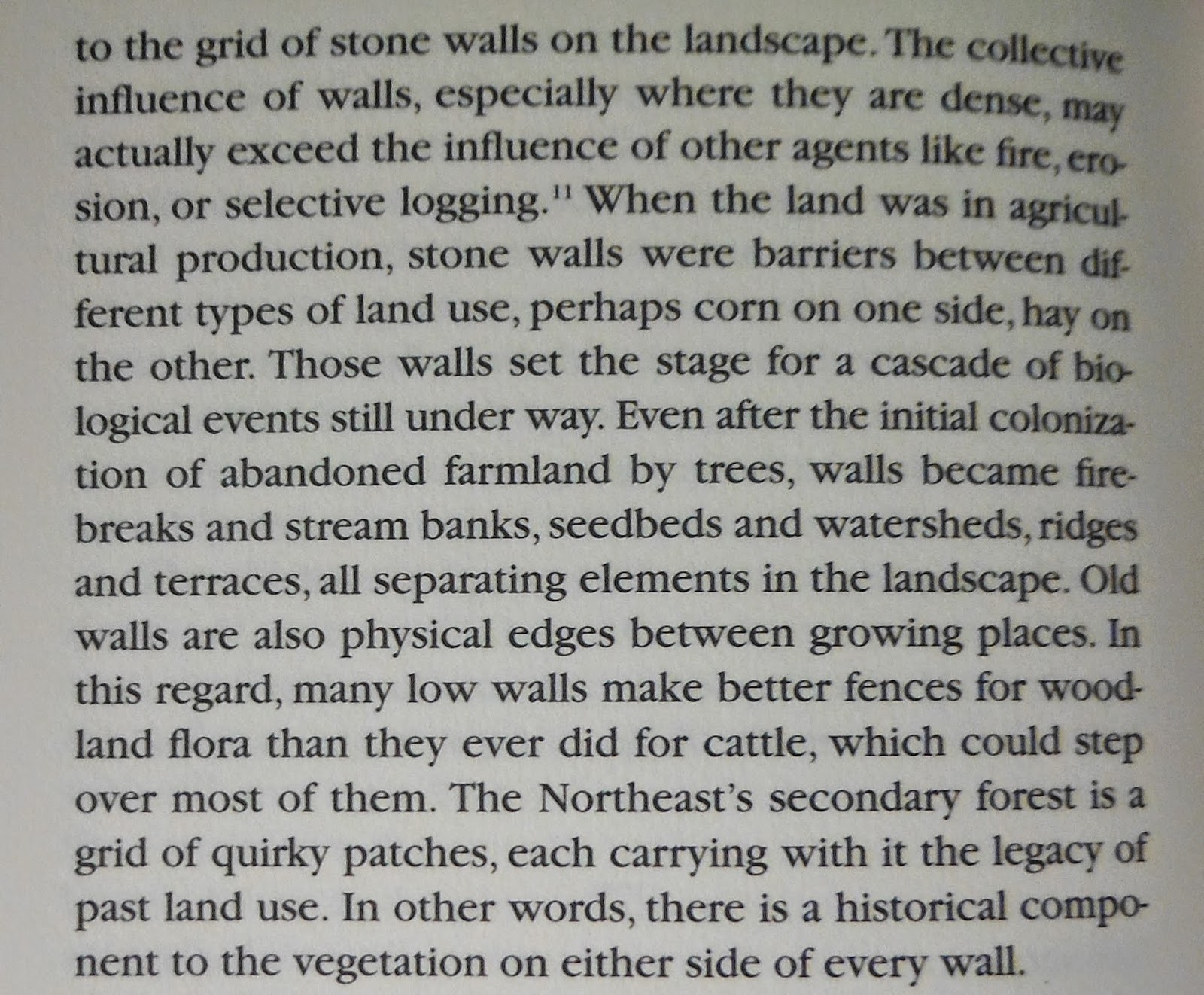 For goodness sake, he seems to be agreeing with me about the function of those "Old Walls:" "Old walls are also the physical edges between growing places ...many low walls make better fences for woodland flora than they ever did for cattle...all separating elements in the landscape."  Indigenous Cultures were using burning as a tool to shape the landscape here for a very long time. The presence of or Native American Iconography, such as the turtle effigies, in all these thousands of miles of row of stones may be a cultural clue as to who carefully and artistically stacked - and maintained - these "stone walls" over perhaps thousands and thousands of years.
That Native American "foot print" may rather be all around us, remains of one of the world's largest "rock gardens," misidentified by an Ethnocentric bias.
Here's a question to ask: "What if the stone wall begins or ends with something that resembles, sometimes, a very anatomically accurate an Eastern Timber Rattlesnake head?"

Which culture would be more inclined to create this gateway at the former home of the first Puritan minister in Bethlehem CT? First Congregationalists (to whom the serpent was associated with the Devil) or Indigenous People (to whom the Great Serpent was, among other things, a protective spirit being, greatly involved in matters concerning water and weather and so much more)?

An interpretive overlay:
Adding antlers to both, I only added some eyes to the photo on the right, just where some roundish depressions occur in that stone. 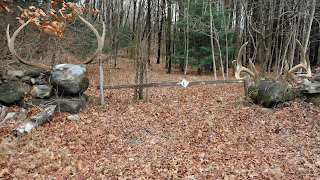 The seeming eyes of the boulder on the left received no overlay although sometime in this stone's history human hands may have enhanced the stone and create the artistic effect of a a Great Serpent with white eyes, reminiscent of the Uktena or "Strong Looker," reading the thoughts of the person about to enter this space: 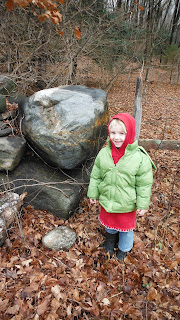 That Great Serpent is another "key" to understanding Indigenous Stonework - or Stone Art...
Posted by Tim MacSweeney at 5:07 PM