Tim Visel, in a draft of "Possible Construction Details of Stone/Wood Alewife Weirs In New England Tidal Streams; A Design Model Explanation  " (To accompany a recreation for the upcoming Hammonasset Festival, Oct 1-2, 2011 in Madison, CT) writes: "Some of the historical accounts describe the wing walls as gathering fish into baskets with the flow.  This is quite possible on the return to sea migration and this could include salmon and shad as well...It’s hard to evaluate the direction or movement of fish from many historical reports. They just mention how effective they were but it could provide some insight of non fishermen writing about what they observed.  To many it might seem the wing walls were guiding fish into the throat, the appearance of open arms and the downward flow...the heaps of stones remain – still holding the classic Vee shape after many centuries..."

And here’s another possibility:
In Folk Medicine of the Delaware and Related Algonkian Indians by Gladys Tantaquidgeon, Gladys lists on page 30.

"CHESTNUT (Aesculus glabra), “big acorn tree”: …Nuts are ground up for use as a fish poison in streams. This is known as “fish peyote” as it makes the fish "dizzy" and they can be caught easily.”

Gladys is using information taken from interviews with Delaware/Lenni Lenape people living in Oaklahoma in the 1920-30’s (I will look through Speck’s “Big House” because I seem to remember him mentioning it in there somewhere – she was his student/assisstant) and there’s an influence of other Native People, and the Wilson or Peyote Cult in the thoughts and language used by informants, and the “peyote” part comes from that, I infer. But then the downstream idea works well with “stunned” rather than actually “poisoned” fish.

“The active ingredient is released by mashing the appropriate plant parts, which are then introduced to the water environment. Poisoning was generally done in stagnant pools or slow-flowing streams and rivers, that allow the pounded bark, leaf, seed, root or fruit, to concentrate its power without being washed away or diluted by a strong current. Sometimes streams would be partly blocked to slow down the water flow. Gathering the fish was usually done by hand, but baskets, spears and nets were sometimes employed.”

Above from: http://www.rogueturtle.com/articles/fishx.php and there's more to be found at: http://www.survival.com/fish.htm 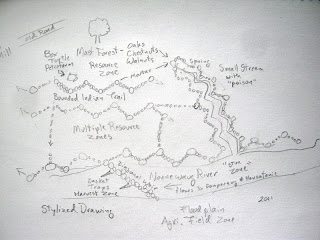 Above the diagonal weir at Nonnewaug in Woodbury, a smaller stream used to flow into the Nonnewaug. The area it comes from is where there was an early road from the nearby mill owned by the Minor’s and then Atwood’s, both families historically connected to my house built early in the 1700’s (possibly begun as early as 1700 or 1710), that leads uphill into the “mast forest” resource zone of the earlier Native American Cultural Landscape, the easiest route back down to the mill. This smaller stream has been redirected many times in the past and there still is mostly an oak forest along that old and abandoned road - and probably was the source of the hand hewn chestnut timbers and plank sheathing of my house, some of the planking showing signs of being “pit sawn” rather than milled. I’ve located a mortar in a “stone wall” that was probably a fire break around the forest and it makes sense to me that chestnuts could have been ground up there, placed in the stream to stun fish that flowed down into baskets on the downstream side of the stones and stakes of the weir.

Also, from personal experience with eels, I would imagine that a stunned eel is much easier to catch than a “regular” eel. Same goes for any other fish. What could be less labor intensive than having some stunned fish flow downstream into your waiting basket at a gap in any sort of fishweir and the Nonnewaug fishweir in particular? 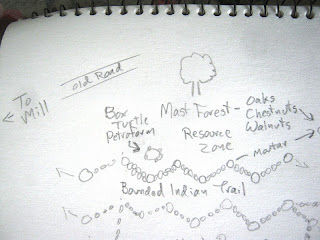 Step by step details﻿:
Offer some Tobacco at the Box Turtle Petroform, gather some Chestnuts (Black Walnuts and other plant materials too?) Place them in the small stream... 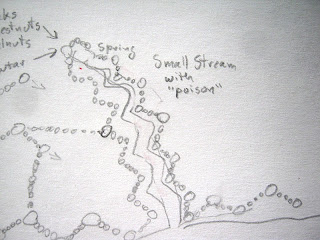 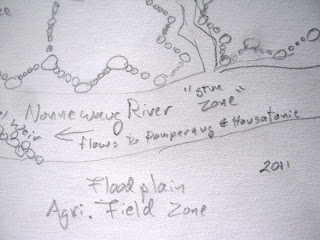 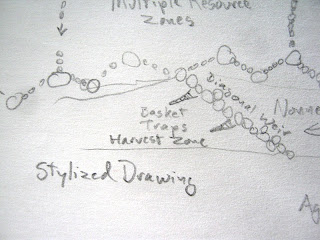 ...walk down to the others gathered at the Fish Weir and prepare to eat and otherwise process and use some "dizzy" fish.
Posted by Tim MacSweeney at 9:12 AM