A little more about the Boulder, which I find is known as Joshua Rock, from an email from Donald Rankin:


"Hi Tim,
Thanks for writing and your interest in Native American culture and tradition. Joshua Rock, located at the entrance to Hammonasset Beach State Park was named by Native Americans for Joshua (a.k.a. Attawanhood) who was the product of the marriage around 1641 between Uncas and the Hammonasset maiden that took place following the Pequot War 1637. Uncas promptly sold Hammonasset land along the water to Col. George Fenwick and Henry Whitfield and moved the Hammonasset folks, perhaps numbering 125 souls, to the Oswegatchie Banks of the Niantic River. Joshua, who later became a powerful Mohegan Sachem himself, fought in the King Philip's War(1675-1676) and died shortly thereafter leaving behind 2 sons and a daughter. Joshua Rock, a chunk of metamorphic gneiss that was earlier iapetos ocean floor that was squeezed and fused to proto-North American in a process beginning 500 million years ago. This glacial erratic, probably from north of Hartford, was tumbled down during the last glacial period and deposited in its present location about 17,000 years as part of a "mini" recessional moraine while the glacial was melting and backing out of New England. Dale Carlson (Abenaki) and I will be part of the Schumann series presented at St. Andrews Church Thursday evenings at 7 PM. I've attached a copy of the flyer. I believe all programs will be well attended. "
Best,
Don
Googling around, I found the blog entry of Melissa Pionzio, from June 12, 2008, where I learned a little bit more about that big boulder at Hammonassett and why it had been recently cleared:
“Here's Madison resident Phil Janssen, a really great guy I met today, who has been spending some of his free time removing tree stumps at a future park near the entryway to Hammonassett State Park.
Phil got involved in stump removal/grinding at the site, after he learned about the project from his friend and neighbor Don Rankin.…Rankin, a retired medical doctor, has a great interest in geology and Native American culture (being of Native American descent himself). Over the years, he's been keeping an eye on a huge and beautiful boulder that has been sitting on the site for just about forever. It's been dubbed by the Native American community, Rankin told me, as "Joshua Rock" after the son of "Uncas" a well-known leader of the Mohegan tribe.
Here is Joshua Rock, it's really something! Much better in person (or in Tim Macs’ photos)... 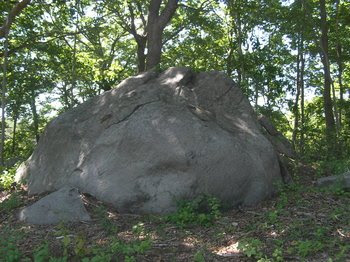 … Phil has finished removing about 50 stumps at the site and Dr. Rankin, a Vietnam War veteran, says he would like to see Joshua Rock and the surrounding grounds it sits on, become a place where people can come to commemorate the state's many service men and women."

http://blogs.courant.com/itowns_mr/2008/06/madison-man-likes-to-help.html
And an unidentified writer says this of Attawanhood:
"The genealogy of Uncas is found in Trumbull ( 1885: 101-4 ) This document created by Uncas in 1679,with English legal assistance
Sons: Uncas had at least three sons, Oneko ( Oweneco) the oldest,who went to Boston with about fifty other Mohican warriors (including his brothers Attawanhood and Ben who were held hostage at Cambridge until the Mohegans proved themselves loyal) to join the Colonist against Philip in 1675. He succeeded Uncas as sachem of the Mohegans. He died in 1715 at 70 or 75 years of age
John, his second son
Joshua or Attawanhood, his third son, sachem of the Western Nahantics. His residence was at Lyme, Conn. near Eight Mile Island in the Connecticut River. Died 1776

http://members.aol.com/mpied31415/nanapashemet.html
And from Carolyne's Native American Genealogy Helper, I find an anglicised name that turned the man's Native American name into Atwood, surprising me because my house is listed in some old Woodbury histories as "an Atwood House," with probably no connection at all but coincidence:
Attawanhood aka Joshua ATWOOD

Note:
It is believed by some of our family researchers that Attawanhood, also known as Joshua, is the father of Philip Atwood. At present the evidence is circumstantial, but seems to fit.
Attawanhood, alias Ahaden, aka Attawahn, aka Attawan, aka Joshua Uncas (3rd son of Uncas Sachem of the West Nihantics) Wife Unknown (English Speaker)Children 3 (2 Sons unnamed, but known to be inlaws of Robbin Cassassinamons of the Peqout) Daughter (Indian Papers Vol. 1.30) or 2 Daughters A Man Called Sampson.According to the "Genealogy of Benjamin ATWELL of New London Ct. 1664" By Norm Ingham in an issue of THE GENEALOGIST), the cousins of Lucinda ATWELL received land in Old Saybrook as a grant of the Proprietors "of land set aside for the children of Attawanhood" He being the 3rd son of Uncas and the captain of the Mohicans that saved TREAT'S men in the Battle of Bloody Brook".
Attawanhood was kept as a hostage in the confined area of the colonists families following an Indian attack. He lived with the Atwell family. From "The Lyons Family", pg. 9-10:WILLIAM PRATT, JR., accompanied by his brother, John, came to America with the Rev. Thomas Hooker, in 1632, settling at Cambridge, Mass., then known as Newton. In June, 1636, they left with Rev. Hooker and travelled through the wilderness, establishing Hartford, Conn. William Pratt, Jr., was a member of the company from Hartford that defeated the Pequot Indians in 1637, annihilating their power as a tribe. He represented Saybrook in the General Assembly for twelve consecutive years. In his will, Attawanhood, third son of Uncas (Chief of the Mohegan Indians and friend of the English) recommended his children to the care of Robert Chapman, William Pratt, Jr., and Thomas Buckingham. In about 1640, William Jr., married Elizabeth Clark, daughter of John Clark, of Saybrook and Milford. William Jr., died in 1678.
· Change Date: 20 SEP 2007Marriage 1 Spouse Unknown
Children
Phillip ATWOOD b: ABT 1649
From:
http://wc.rootsweb.ancestry.com/cgi-bin/igm.cgi?op=GET&db=carolynegould&id=I12411

Posted by Tim MacSweeney at 8:22 AM