Tree of Peace and Treaty Trees

In a previous post, I mentioned something about these big oak trees: 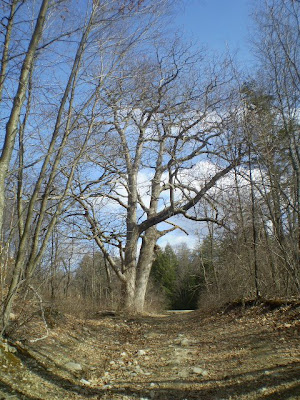 I know you’ve heard of “Bury the Hatchet,” but did you know the rest of the expression is: “And Plant the Tree of Peace?”
I googled “The Tree of Peace” and got this:
“In an ancient time, the Haudenosaunee were ruled by warfare and anarchy, and people lived in fear and hunger, preyed upon by powerful warriors and tyrants. One day, a white stone carried a man, born of a virgin, across Onondaga Lake to announce The Good News of Peace had come, and killing and violence would end. "Peace," he said, "is the desire of the Holder of the Heavens. Peace comes when people adopt the Creator's Mind, which is Reason." For years The Peacemaker traveled teaching the Path of Peace—that "all people love one another and live together in peace."
One by one he convinced each person, village and nation to accept his teaching. Hiawatha, an Onondaga, was his spokesman. At last, all the people gathered Onondaga Lake for the first Grand Council of the United Nations. There, Peacemaker transmitted The Great Law of Peace—instructions to form a society and government based on liberty, dignity and harmony. The White Pine—with five needles clasped as one—became symbol of Five Nations united as one Confederacy.
Peacemaker uprooted a White Pine, exposing a deep cavern with a river at its bottom. He told warriors to cast weapons into this hole and the river carried the tools of war deep in the Earth.
Replanting the White Pine, The Peacemaker said, "To bury the hatchet signifies the end of war, killing and violence."

"The Tree of Peace," Peacemaker explained, "has four white roots extending to Earth's four corners. Anyone who desires peace can follow the roots to their source and find shelter under The Great Tree."

http://www.championtrees.org/yarrow/TreeofPeace.htm
I didn’t get the many results I expected, googling the phrase, until I thought about “Treaty Tree,” and tried those as keywords - and got a ton of stuff, since I remembered it as being a wide spread thing across the country.
Some examples:
http://seattletimes.nwsource.com/html/localnews/2003567902_treatytree12m.html
http://www.spokaneoutdoors.com/peactrty.htm
http://indiancountrynews.net/index.php?option=com_content&task=view&id=1421&Itemid=122
http://www.potawatomi-tda.org/indiana/treatyt.htm
http://www.nebraskahistory.org/publish/markers/texts/indian_treaty_monument.htm
There exist many “Treaty Trees” all over the place that were ref’s I could use, the mo’ refs, the mo’ better. And then of course the age of the big Nonnewaug Trees could be Treaty Trees that fit the time of the two “land purchases” of the area - that were really treaties to share the land here rather than actually sell it – Indian way, the Earth owns you, not the other way around. It may be why there’s two trees, since there was an original and a confirmatory “deed” to the 4th or Nonnewaug Purchase. 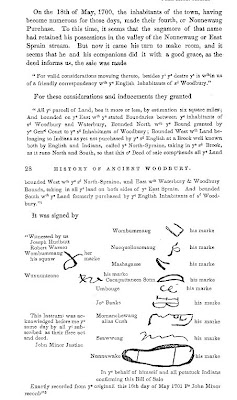 It’s interesting to note Nonnewaug's signature and how it changes from the one on this previous “deed.” Could there be some alcohol involved here that accounts for the change in the signature? 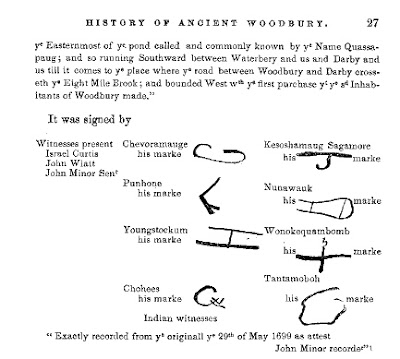 How about this one for the “confirmatory purchase” that covered “all previous purchases”?? 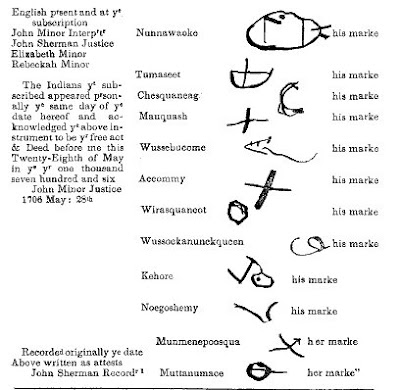 Well, that’s something to think about, isn’t it? 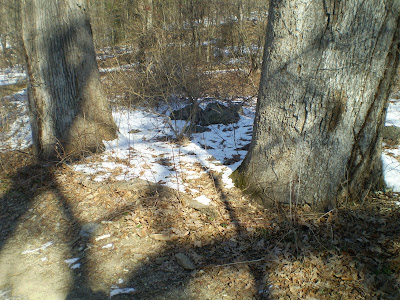 Stones (and a hat) at the base of the Trees: 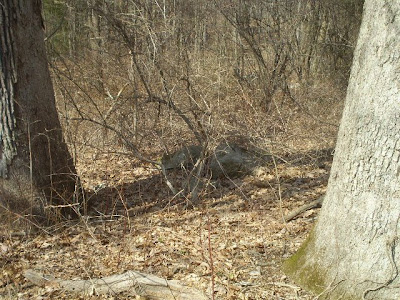 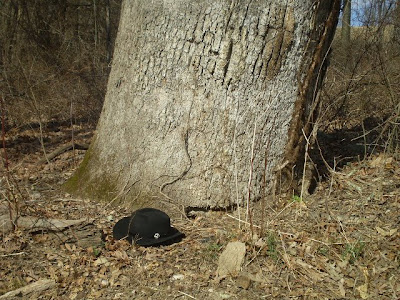 Posted by Tim MacSweeney at 7:50 AM