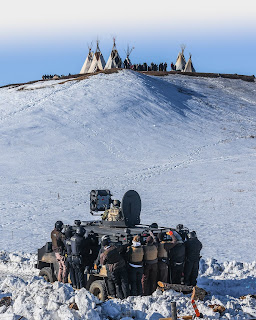 Police officers prepare to approach the Last Child Camp at Standing Rock in North Dakota on Feb. 1, 2017. Native Americans and activists braced for another standoff over the Dakota Access Pipeline following President Donald Trump's order to speed up the approval process.
http://abcnews.go.com/International/photos/week-pictures-jan-26-feb-2017-45229850/image-45233342

WASHINGTON – ABC News has posted a video with President Donald Trump saying he has not received one phone call with anyone complaining about the Dakota Access pipeline. He maintains “everyone’s going to be happy in the end.” 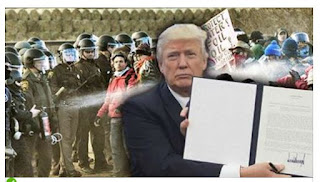 When Native News Online correspondent called the White House this morning, he received this message:

A transcript of President Trump’s remarks:
“As you know I approved two pipelines that were stuck in limbo forever.
I don’t think it was controversial you know I proved it.
Not one call from anybody saying.
Oh that was terrible thing you did I haven’t had one call.
So it’s like bedlam right haven’t had one call from anybody.
And you know.
Lot of jobs and that keystone case we have potentially 32000 jobs.
Almost immediately.
And then as you know I didn’t cut Dakota pipeline.
And nobody called up to complain.
Because it was unfair years of getting approvals.
Nobody showed up to fight it.
This company spends a tremendous hundreds and hundreds of millions of dollars and that all of a sudden people show up to fight it.
It’s not fair to our companies.


And I think everyone’s going to be happy in the end okay.” 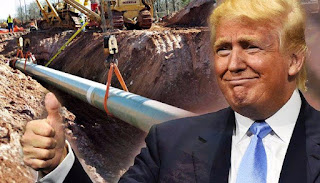 (Sometime, perhaps in the near future, small well-armed schoolchildren will memorize and recite this speech in Grizzly-free classrooms. – Tim)

Posted by Tim MacSweeney at 5:59 AM