What the Trump Victory Means for Standing Rock 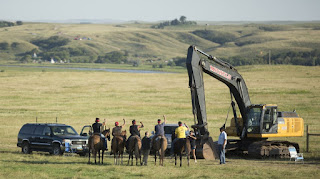 For starters, President-elect Trump would stand to personally profit from the project. His campaign energy adviser, Harold Hamm, would also see gains. Hamm is the CEO of Continental Resources, which has plans to flow its supply of Bakken fracked crude through the pipeline. With Trump’s recent victory, Hamm is also on the short list of becoming U.S. energy secretary. 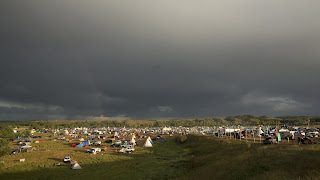 This political changeover has come at a critical time in the struggle at Standing Rock.


Trump vs the National Historic Preservation Act
(7 months ago):
“Several years ago, one of my coworkers had the dubious honor of performing an archaeological survey on some of Trump’s land...One day, while my coworker was leaving the field, a limo pulled up and a window rolled down.  A hand from inside the vehicle waved him over.  There was the Donald himself, wanting to know the progress of the excavation.
“Find anything?” he asked.
“Oh!  Yes-” Trump’s question is one you only want to ask an archaeologist if you have time to kill. We love to talk about the stuff we find, and my coworker made the mistake of thinking Trump actually cared because a few minutes later (he stated):
“Unfind it.”

No matter how many grumpy landowners and construction managers we deal with, a statement like this always comes as something of a shock, and in my coworker’s telling of the story, it took a moment to process.  “What?”
“I said, unfind it.”
That was about the moment where he realized what exactly it was that Trump wanted him to do.  Not gonna lie, going through an attempted strong-arming from the man himself would be a little surreal, and my friend handled it better than I would have: “Oh!  Sir, we will ensure you are in compliance with all relevant laws and statutes.”
“That’s not what I said-”
“We’re here to ensure you are in compliance with all relevant laws and statutes, and that’s what we’ll do.”
At this point, Trump must have told his driver to drive off in a huff, because the window rolled up and the limo pulled away...”