Wondering About "Wondering Beside Willard Brook"


Photos and some text from the blog post: http://wondermyway.com/2016/04/03/wondering-beside-willard-brook/ (and my speculations and photo overlay illustrations) 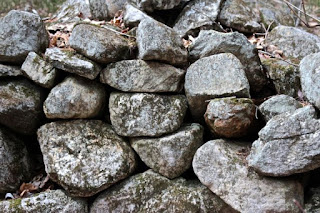 Leigh writes: "Part of my quest was to take a look at stone placement and think about it not as Colonial only, but also as Pre-colonial or Native American...I’ve learned from others to look at the shapes incorporated into stone walls and fences. I may be making this up because I’ve had an affinity with turtles since I was a young child and own quite a collection even to this day, but I see a turtle configured in this wall. Planned or coincidence? Worth a wonder..."
This is an Archaeologist joke about finding patterns: “One is an accident, two is a coincidence, and three is a conspiracy.” I’m assuming that when you find more than three examples, you might have an established pattern, but that isn’t part of the joke. I may be remembering it incorrectly but I think there’s a place called Easter Island where there are rows of more than four big stone bunnies…
So if I look at the photo above, I see the coincidence of two triangular stones of roughly the same size with inclusions of what might be quartz about where the eyes of some thing that reminds me of some sort of animal, placed with those eye-like features uppermost in this stone wall, as if to suggest “intention” of the builder to incorporate an animal, possibly a reptile, maybe specifically a turtle, into this stone wall: 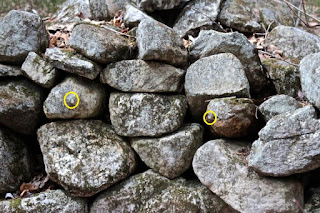 But that’s just two, so it could be a coincidence – a coincidence that a Euro-American farmer in Maine, who found he had no trees around anymore at a certain point in time, resorted to using stones to build a fence and just happened to do this, maybe by accident or maybe even just joking around.
But you know I personally can’t help but look for more possible intention placement that might recall more zoomorphic head stones (and yes, there’s even a suggestion of a “Healing Diamond” or rhomboidal shaped stone): 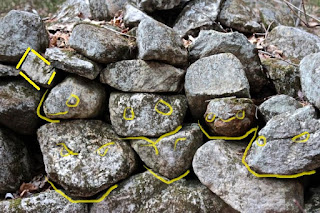 And I suppose because I am finding those rhomboidal stones near the head stones of what I at least think are (way more than four) snake representations both large and small, I can’t help but notice this detail: 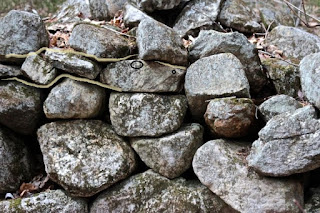 But am I seeing the same alleged turtle as Leigh? A turtle representation needs more than just a head to be interpreted as a turtle in any sort of artwork media, so looking for a representation of a shell or carapace, I wonder, "Could it be this one below, composed of three stones - head, shell and foreleg?" 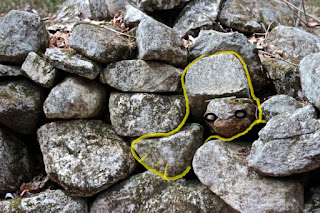 Or this one with some thin marginal scutes above a possible head, a couple of those other kind of scutes I can’t remember the name of right this second just above those?? 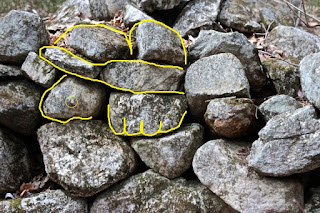 Maybe this one with a big foot or foreleg, rolling its eyes at me (maybe just like you are) during this sort of ink-blot test? 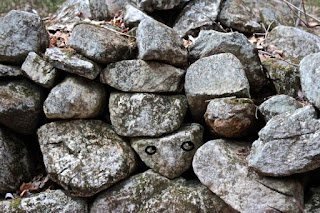 Over by the chamber-like structure, farther along Leigh's route of exploration, there’s a bit of the same thing going on, I think. Leigh writes:
“On the outside of the chamber’s edge that connects with the cellar–again my imagination took over. Perhaps my turtle’s head is the large blocky rock bottom center. Or is it a smaller version in the rocks above. Am I seeing things that are not there? Overthinking as my guy would suggest?”
I think I can see what she means, but you know that stone to the left of it looks a little “worked” to me, as if maybe to represent a nuchal notch along the row of marginal scutes sort of thing and maybe two turtles above that: 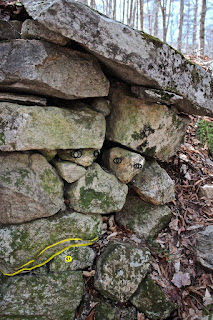 Inside, I see way too many possible eyes for me to even think coincidence – and just because I’m seeing how different forms seem to pop out in different light conditions, I’m thinking a stone can be more than just one thing, all depending on how and when you are viewing it, not unlike other rock art in the world (a turtle’s shell could also be a snakes head, just as each segment of a snake might be another snake, all depending on your perception at a particular moment): 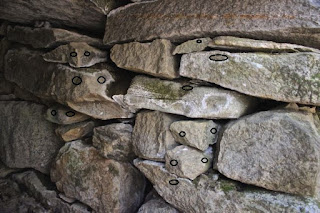 This could be a a simple little petroform placed on a boulder encountered further along Leigh's walk, perhaps, turtle head, shell and a foreleg, but I wonder just a little if it changes as you view it from another angle, just because I can and, after all, we are wonderingmyway: 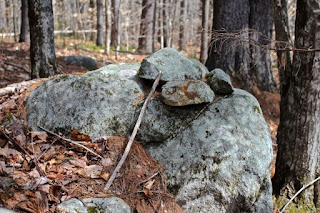 If I hadn’t been looking at the stone fence at another Burial Ground of the same time period and finding more possible Native American Iconography, I might not have noticed a sort of bear’s head looking stone, just touched a little by the shadow of a tombstone: 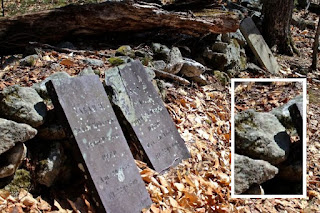 I wonder if this might be a Native-made Causeway, a suggestion of a turtle and a snake as well (a little sugar-loaf sort of Manitou stone in there too): 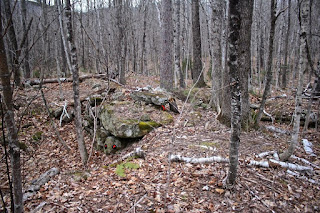 And while I’m wondering, I notice the names in the bottom corner of this map Leigh included: 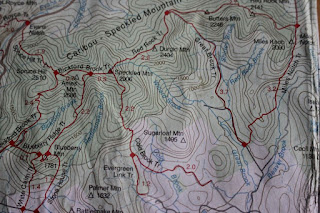 I wonder: Are there white (quartz?) stone piles along the White Cairn Trail? Who built a Stone House on Stone House Trail? Is it something other than an actual house or is it an outcrop or rock shelter? Are there blueberries on Blueberry Ridge and Mountain (with stone fuel breaks that might resemble the rows of stones at Burnt Hill {http://wakinguponturtleisland.blogspot.com/2014/09/two-on-burning-as-in-burnt-hill.html}in MA?) Rattlesnake Mountain and Rattlesnake Brook? Real live Rattlers or stone Rattlesnakes or both??
I really do wonder…

Posted by Tim MacSweeney at 6:31 AM