Larry’s Stone Serpent and a Connecticut Cousin (or Two)

"Do you know why most investigators fail? They refuse to extend their basic knowledge beyond the bounds of basic investigative procedure. It is the mark of the mediocre investigator who fails to use the informed imagination part of science that has in the past led to the greatest of discoveries."
~ Sherlock Stones

There’s that beautiful Serpent Wall, right there on Larry Harrop’s Home Page for “Ceremonial Stone Landscapes; A sampling of Native American stone constructions found in the State of Rhode Island.” That “Strong Looker” follows you along as you view all the other photos, keeping an eye on you, knowing your thoughts and intentions as you see and hopefully observe some of the best photos I know of that document all the stacking patterns and variations that all but the most unimaginative might imagine are the results of field clearing or stone fences made to impress herds of cows or sheep, as the Euro-American Myth goes: 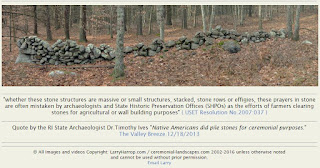 http://ceremonial-landscapes.com/gallery31/index.php/
This Serpent is in that collection entitled “Effigies,” under the subheading “Serpents,” and you can see three views of that “composite” head-stone and the undulating back bone of the Serpent: 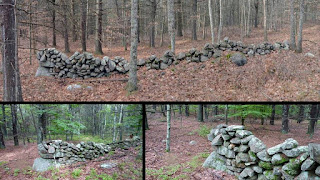 Larry Harrop Photo, used by kind permission - and he was nice enough to send a copy to me
rather than use the image I lifted a screen shot from here:
http://ceremonial-landscapes.com/gallery31/index.php/Effigies/Serpents/fs_5
I have looked at this photo dozens of times before and should really be embarrassed to say that I should have been thinking of this one in particular just recently when walking around some very similar constructions along some old, older and oldest of trails.

This one was disguised the first time I saw it (Nov. 2014), snow clinging to the branches of a small tree beside it, like a Santa Claus beard: 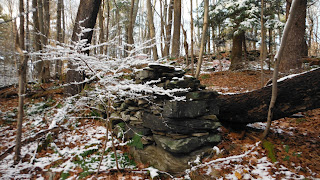 But when I walked by the same gateway in a stonewall in January 2015, something about it seemed so Serpentine and, now that I reflect on it, much like that photo of Larry's: 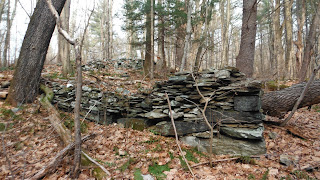 There was another close by, but not in as good shape:

It could be an unfinished structure or a result of a sort of “normalization” effort to make it more resemble a Euro-American stone wall, as level as a string stretched horizontally above it. Maybe it just fell apart or maybe the stones were easily carted off at some time to be used somewhere else, as close by as a rut in the present road just below this spot.
Follow that stone row – or Stone Serpent (or series of Stone Serpents) – and you come to another, larger and taller and less compromised similar stone row – or Stone Serpent: 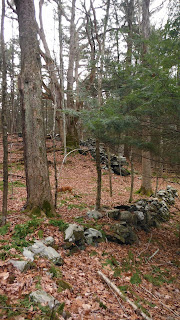 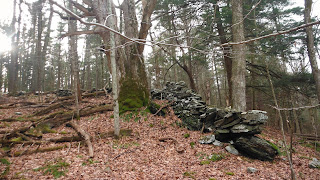 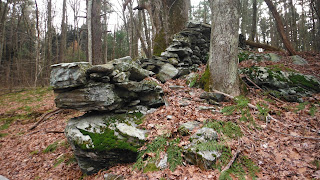 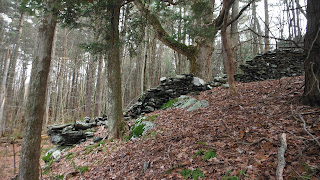 Makes me wonder about this one too: 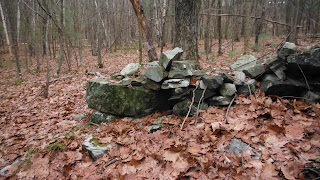 Posted by Tim MacSweeney at 5:06 PM