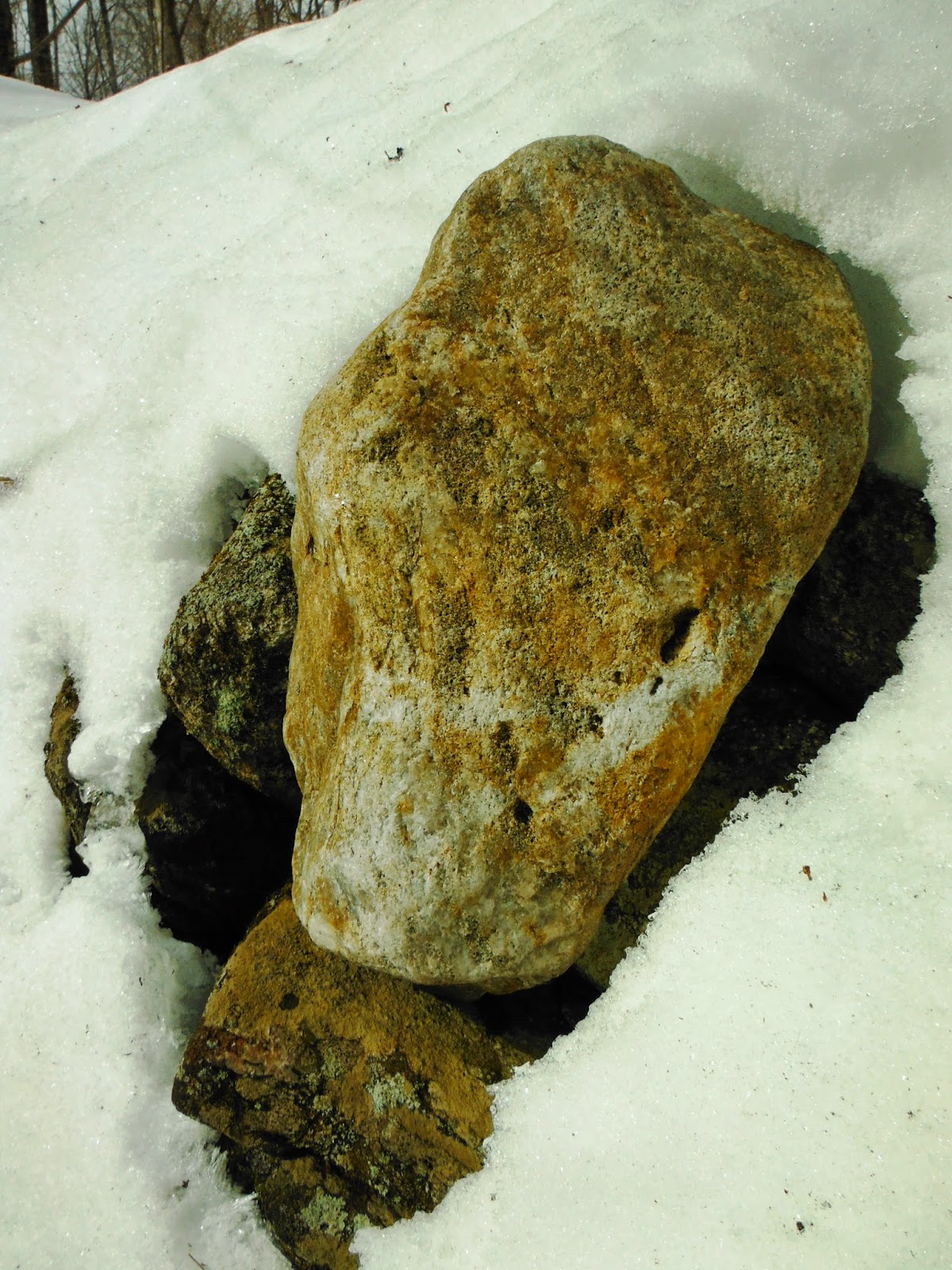 Perhaps there's one that resembles a profile
Of a turtle looking out sideways at me
One long foreleg extended rearward
One eye open, looking right at me... 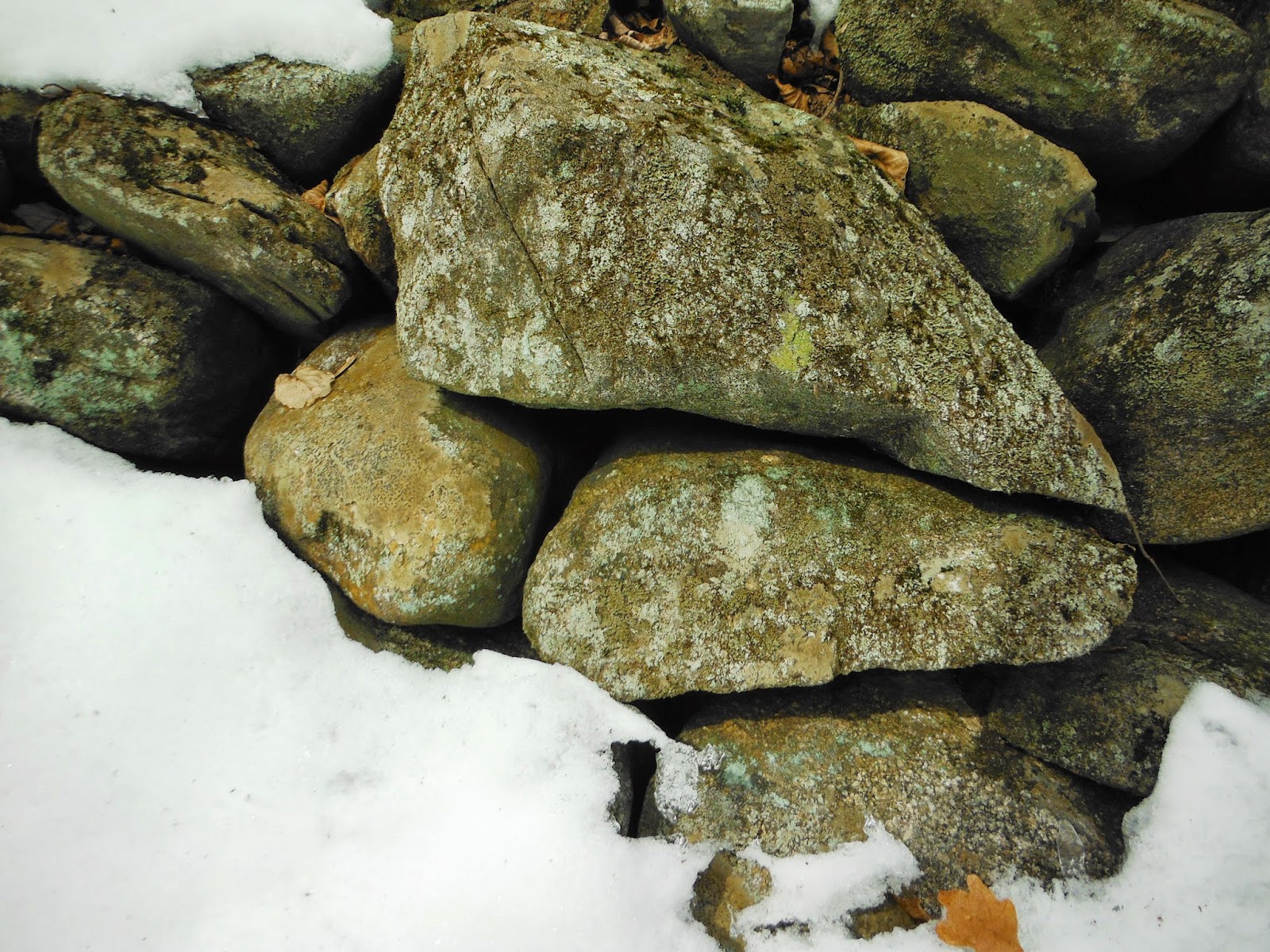 Another hand-sized stone
Perhaps another profile
Along the same segment of stones
Placed just so, eye and snout and mouth... 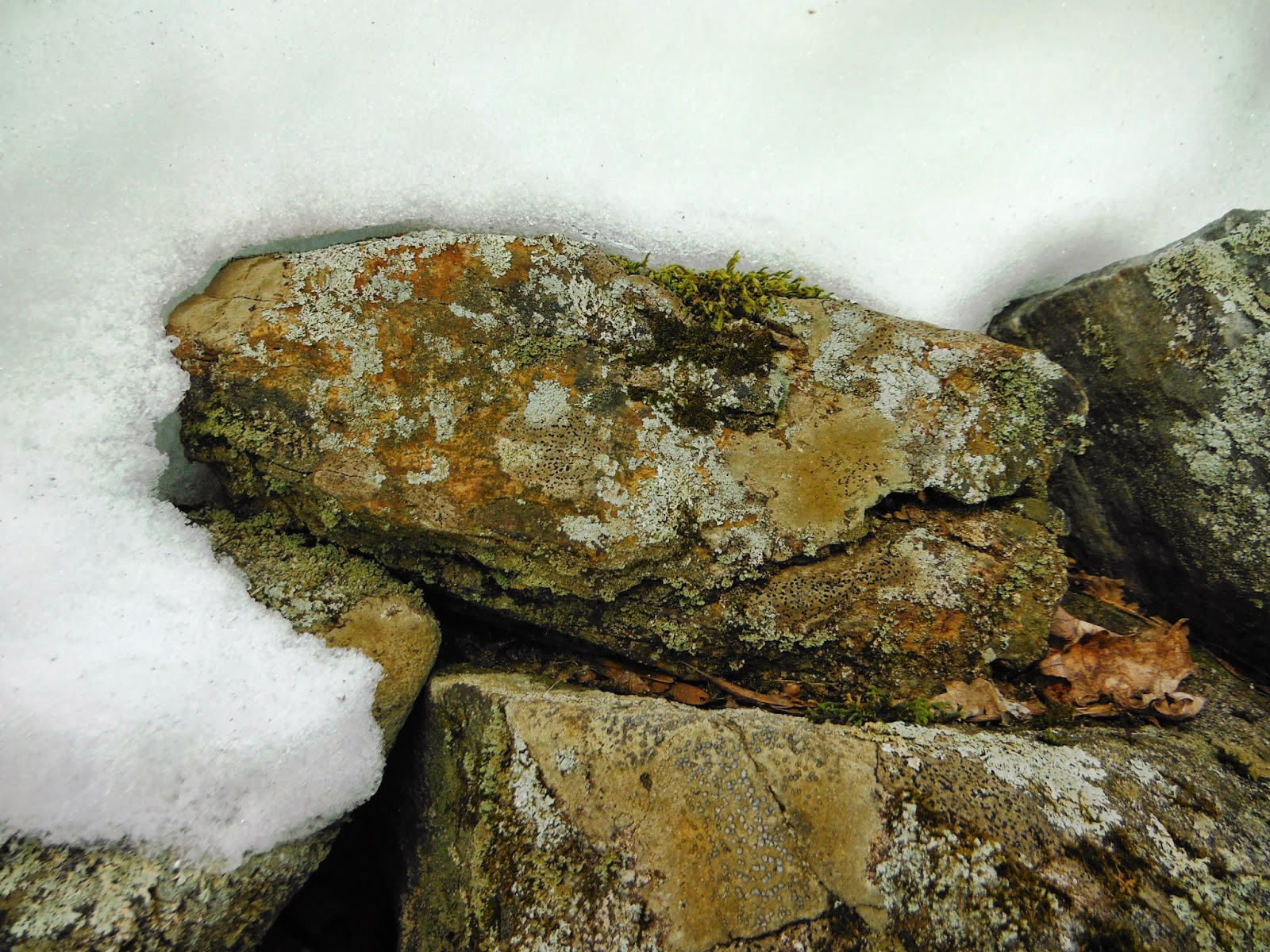 The next row toward the west,
Large stone standing beside it
Something about it reminding me
Of other things than field clearing 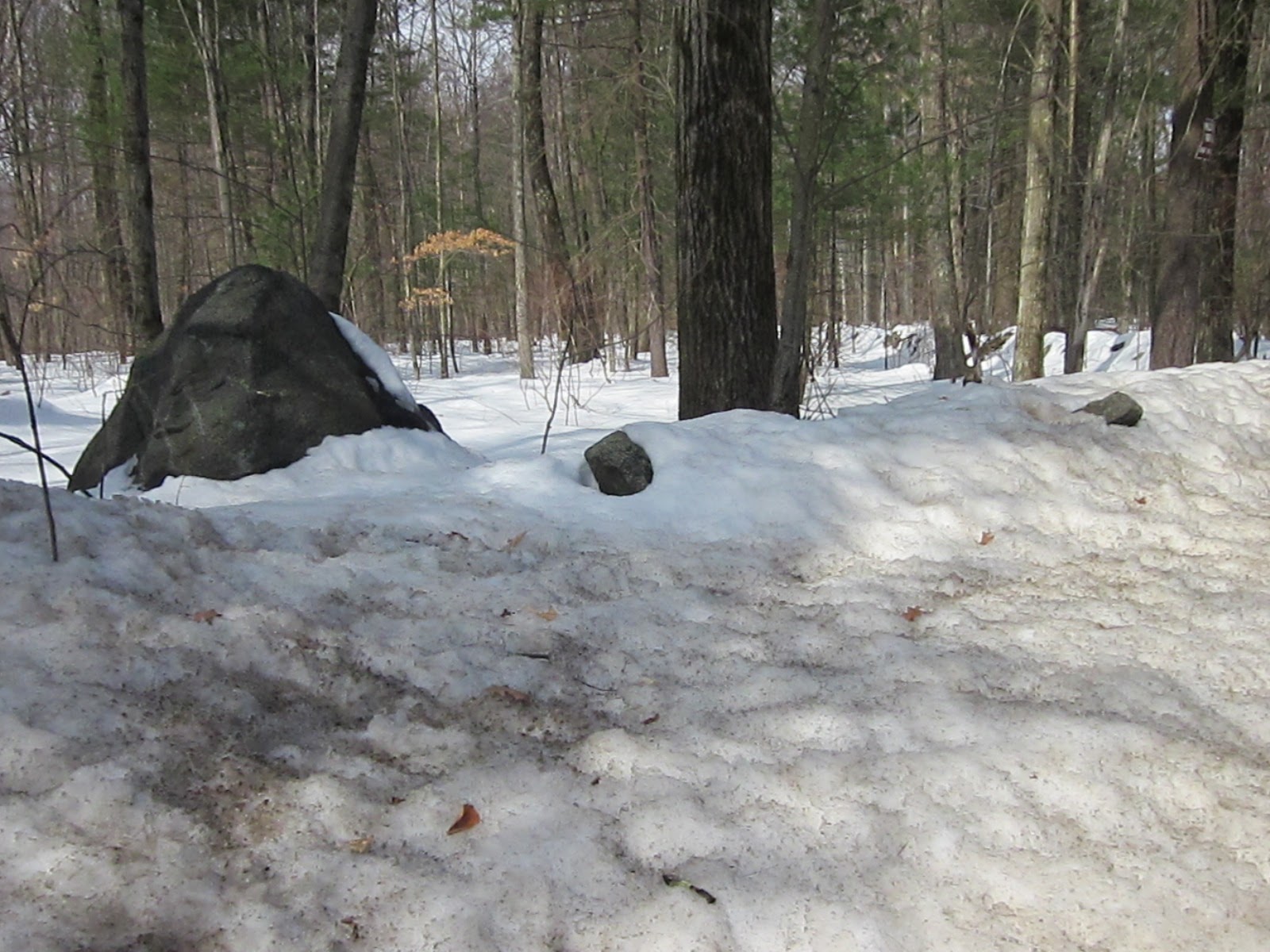 Why not connect the "stonewall"
To that Glacial Erratic?
Or is there something else going on,
Like Ezra Stiles' "God Stones?" 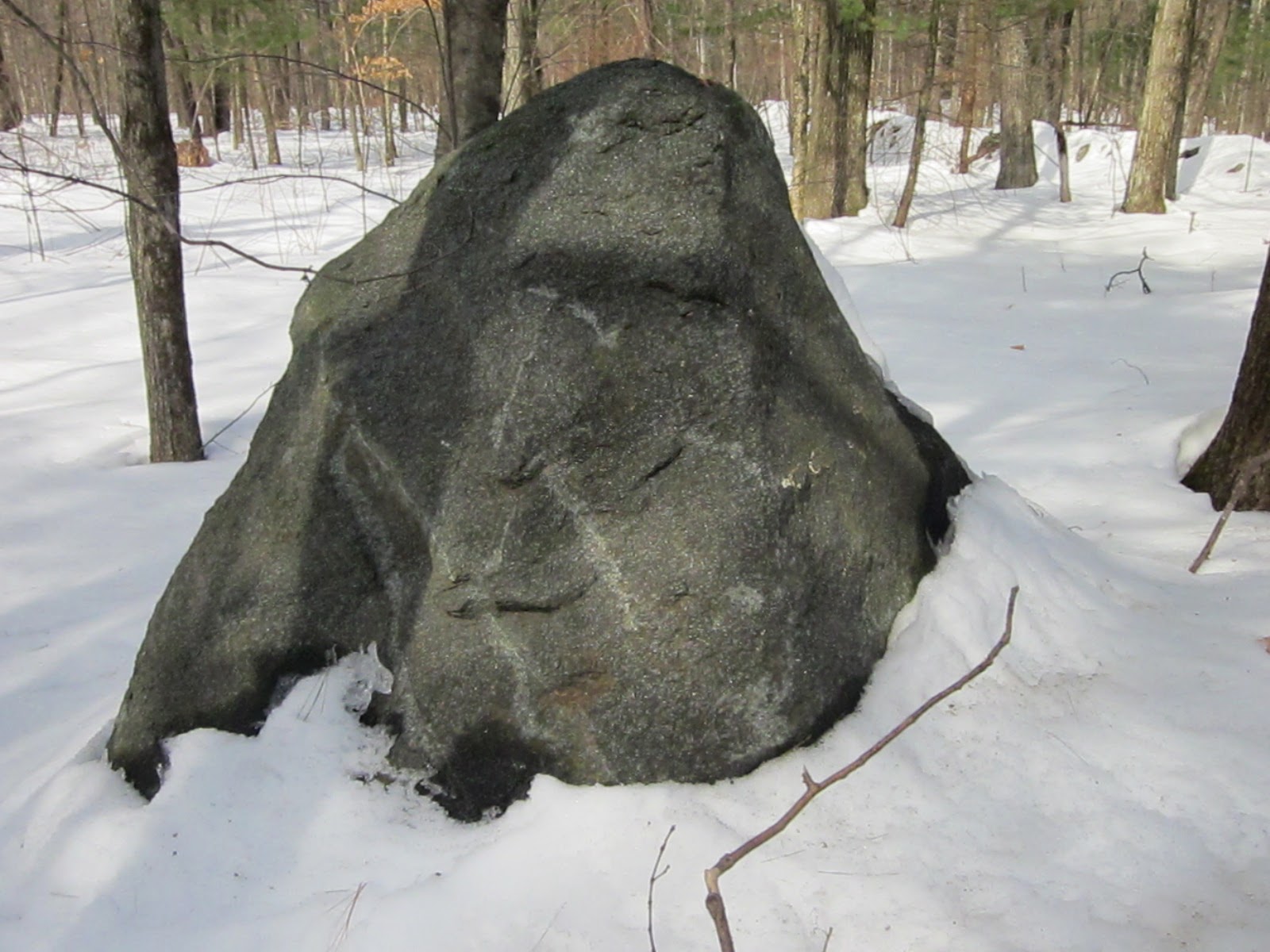 Walking along the row of stones
It's not too far until I see a stone
Shaped like a bird perhaps by Nature
Placed by a human hand so it's perched like a bird... 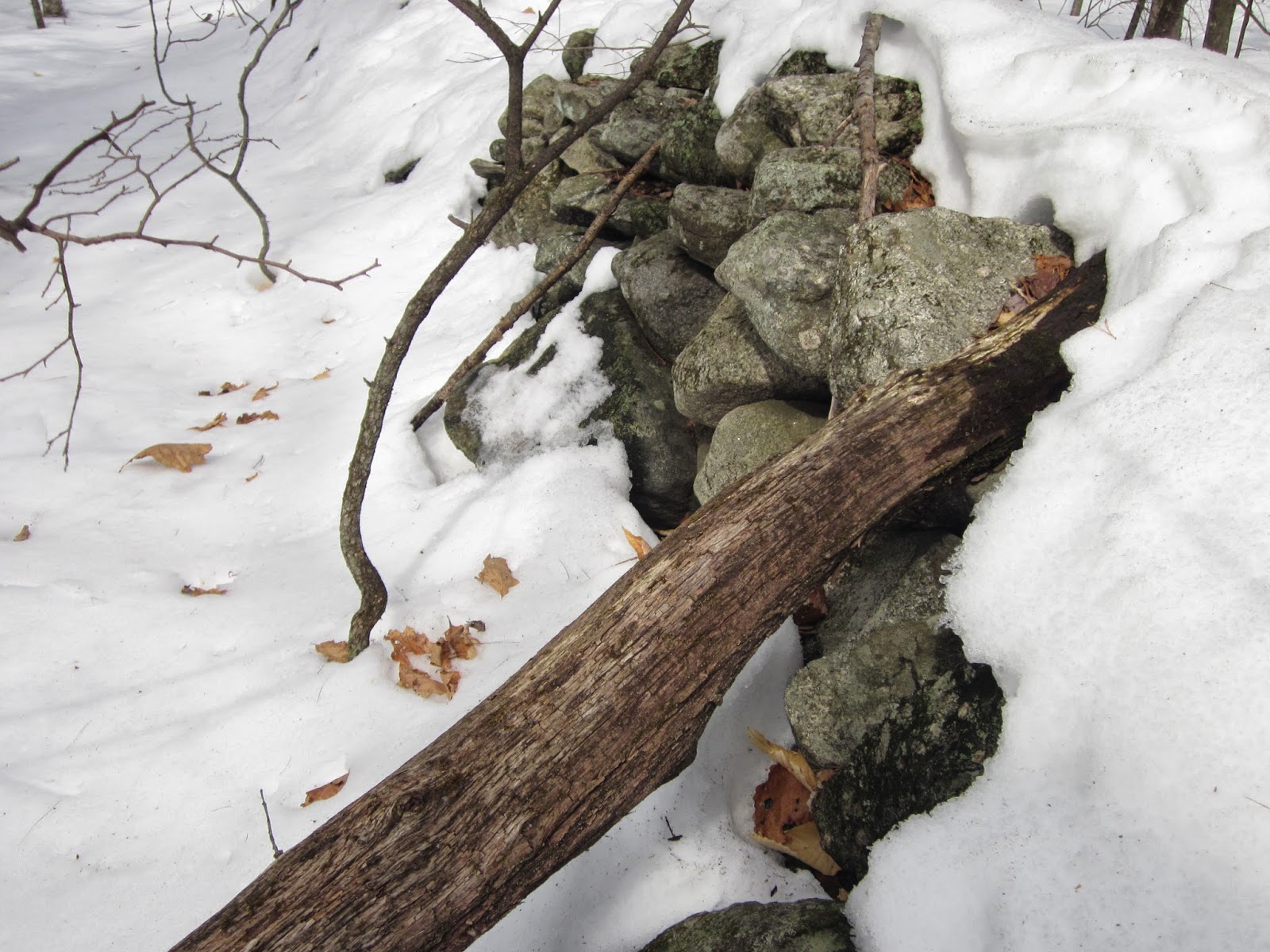 (Can you see it, that rather plump bird?)
The snow was still pretty thick that day,
So it was a little further on along that row
That another familiar testudinate variation in stones
Was revealed by the melting snow... 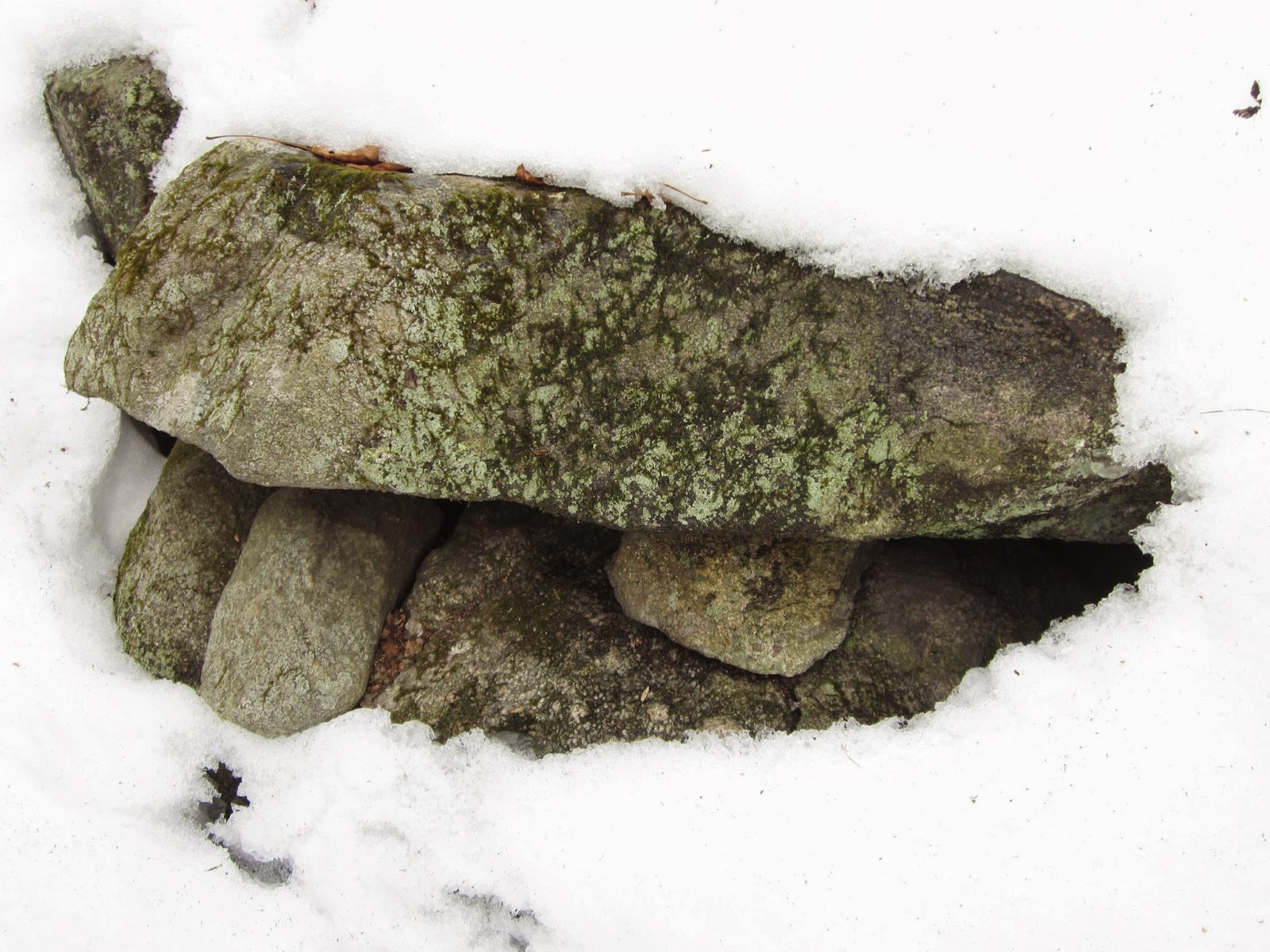 (Carapace, headstone, and two almost identical legs?)
Another small segment,
Where a branch has fallen
On the western side of the row of stones
Shows under the crusty snow... 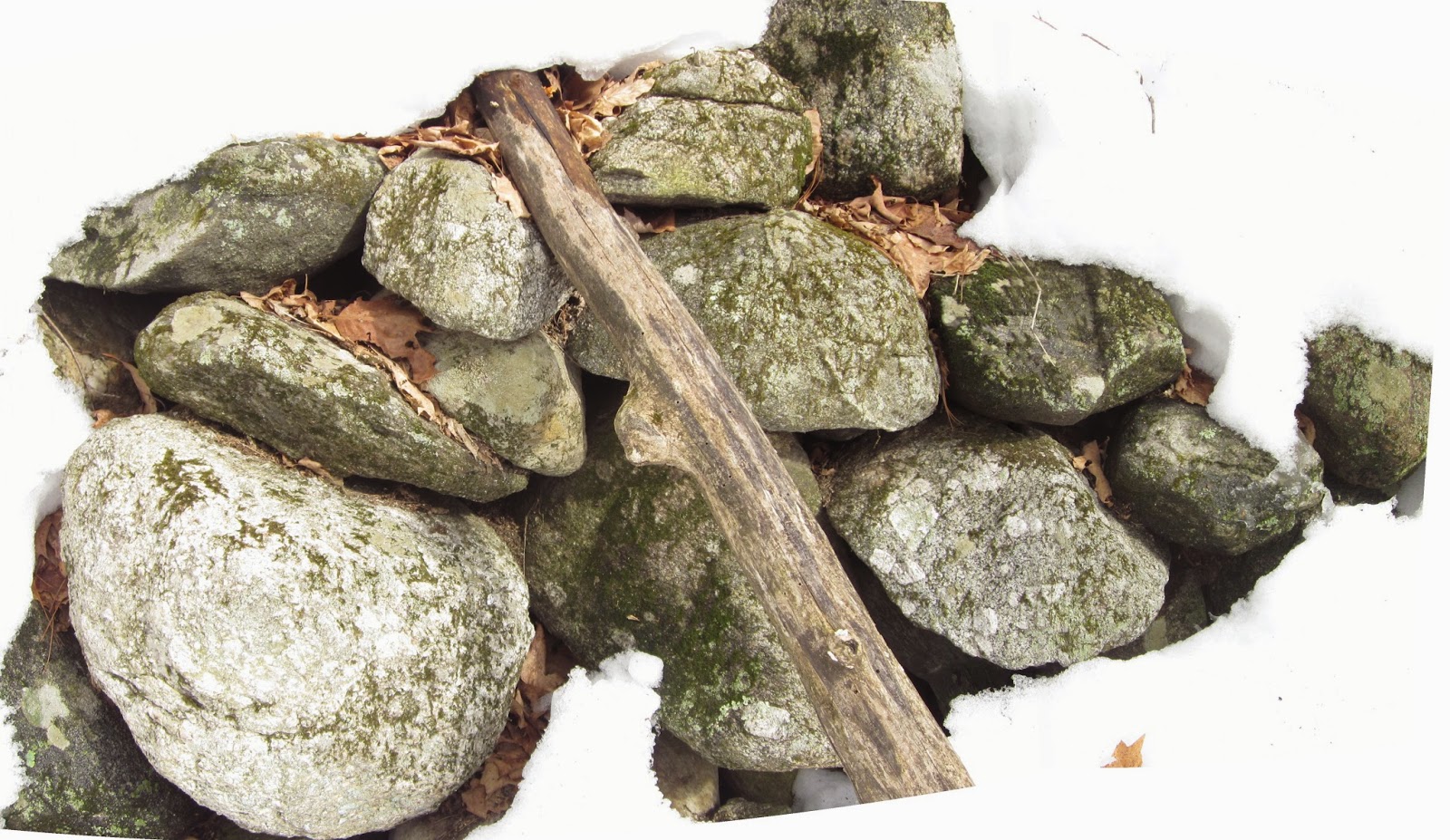 I've heard the human eye searches
To find things like faces
In clouds, or in the polished grain of wood,
And many times in stone 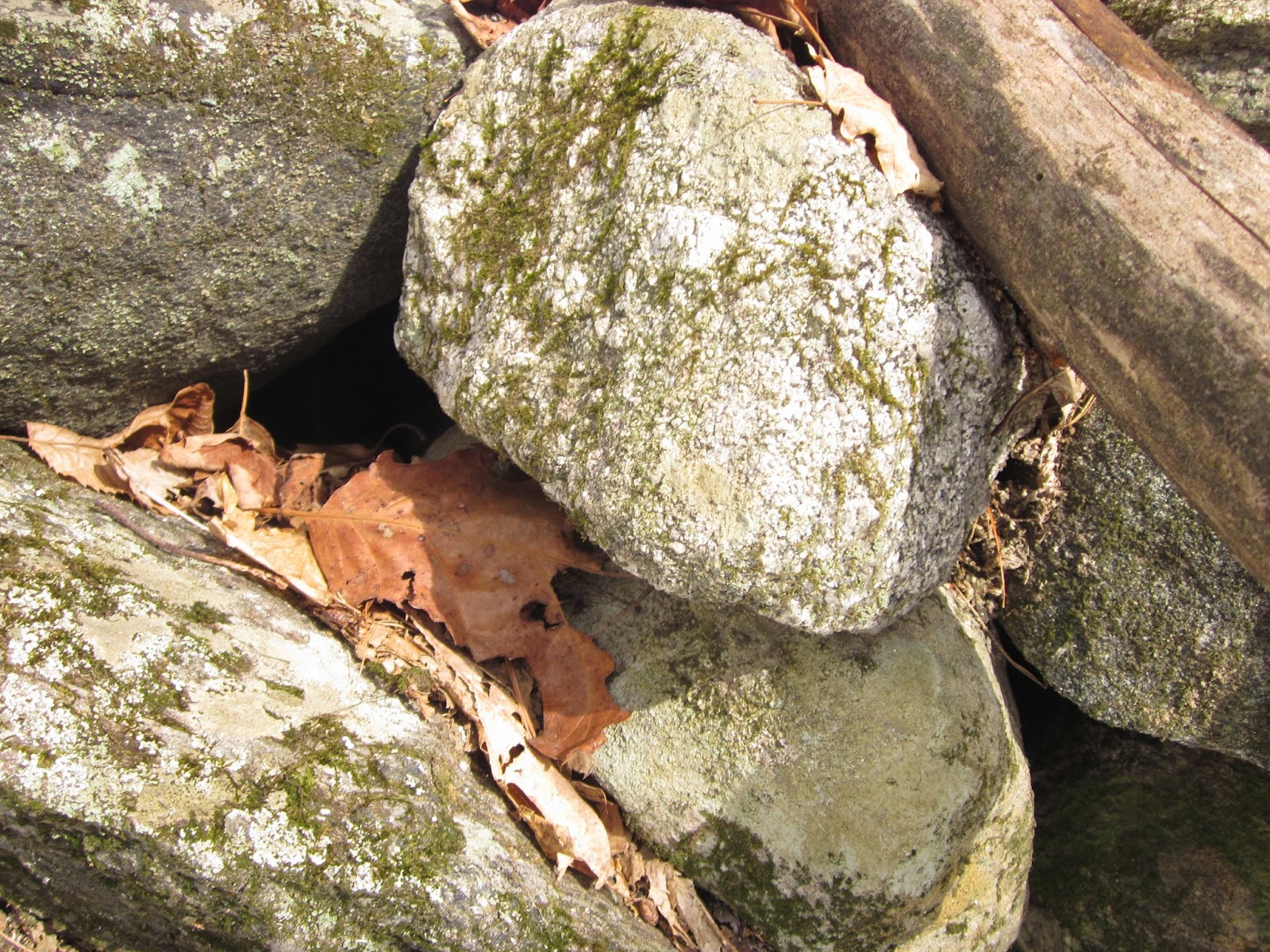 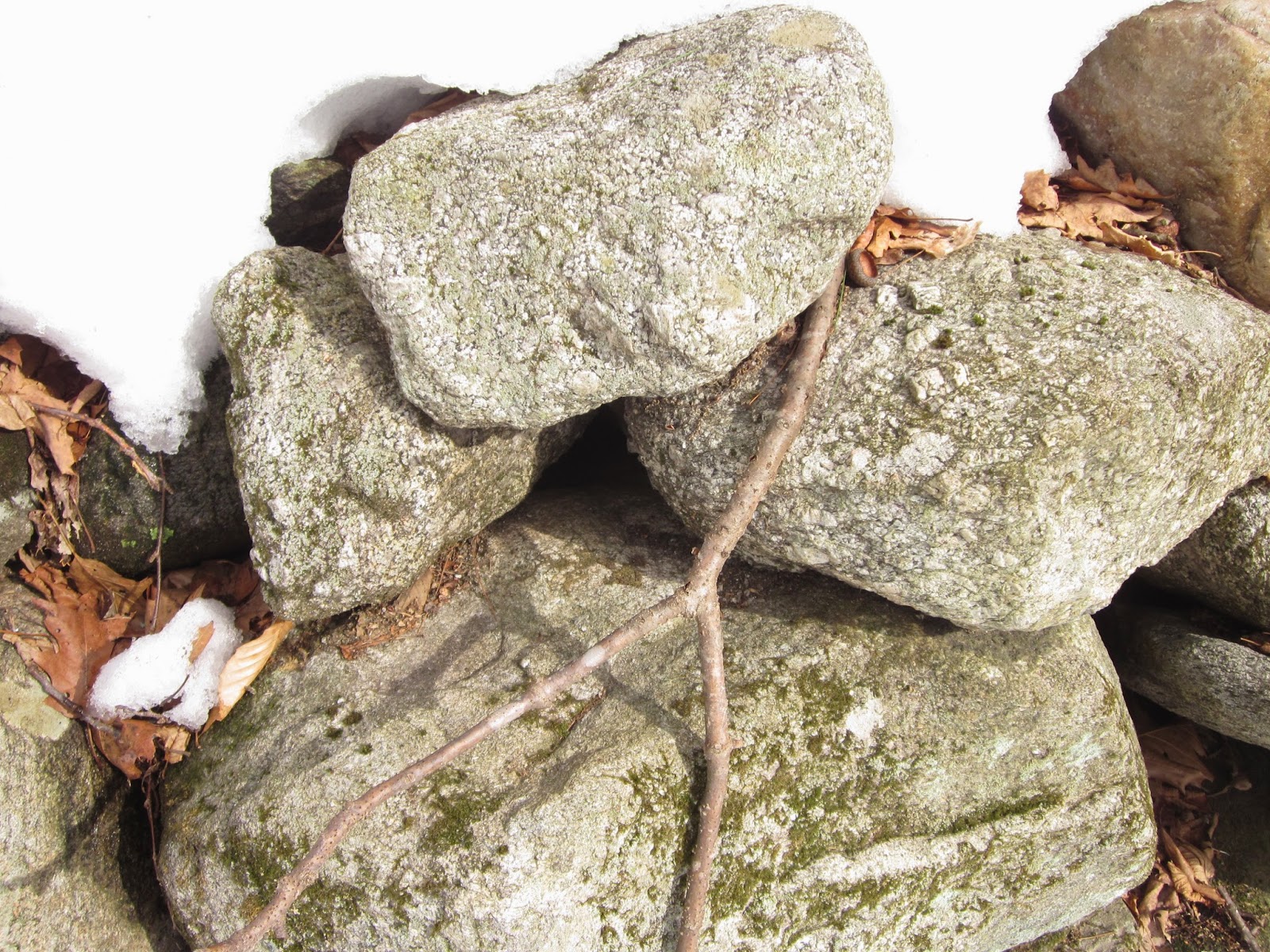 Dimples in stones again like eyes,
Resting on a stone with dimple too 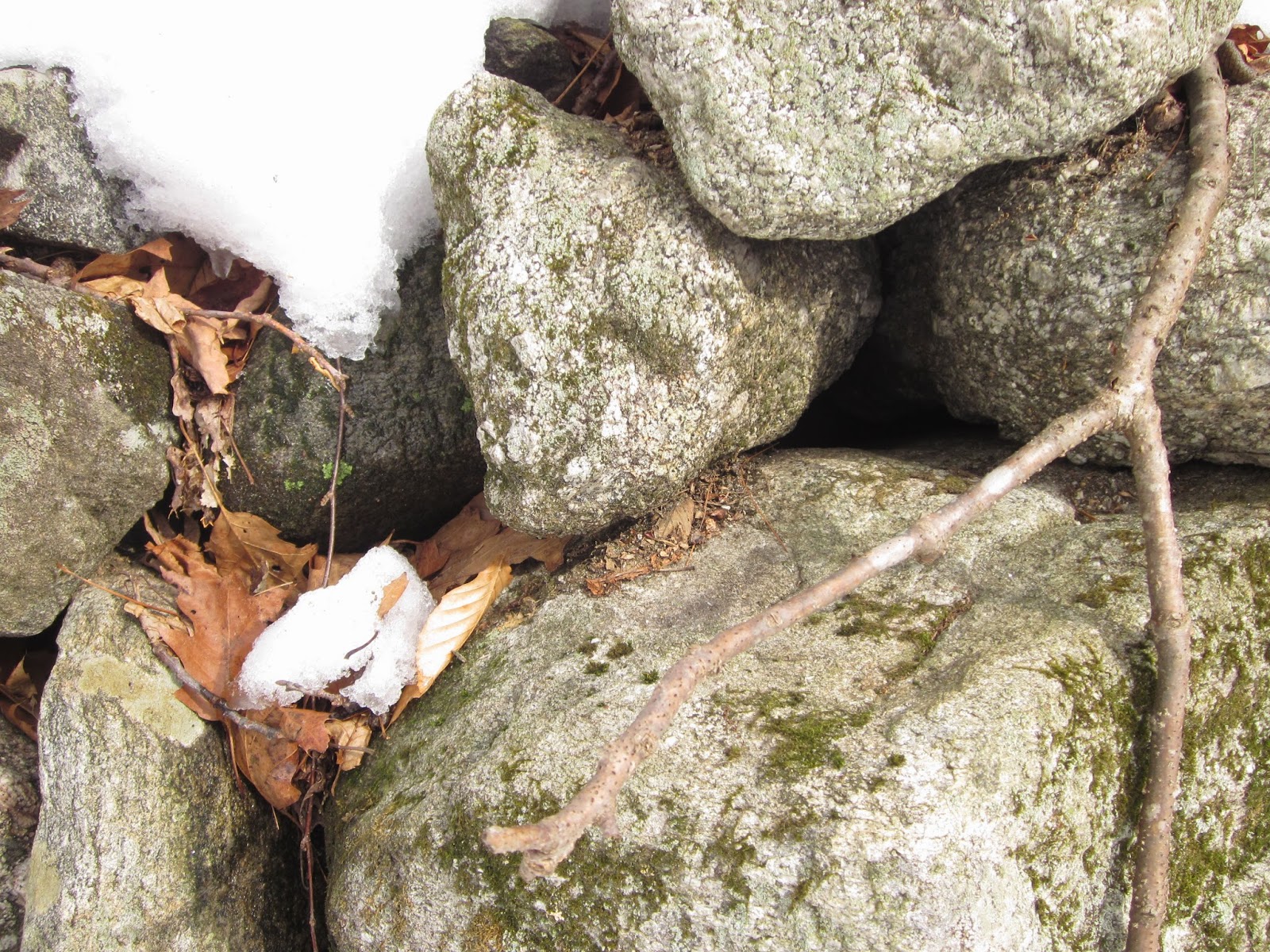 And looking closer, I wonder,
Would a clam shell rest easy here?
Has someone ever done that,
A place to burn some tobacco,
Offer up a Prayer? 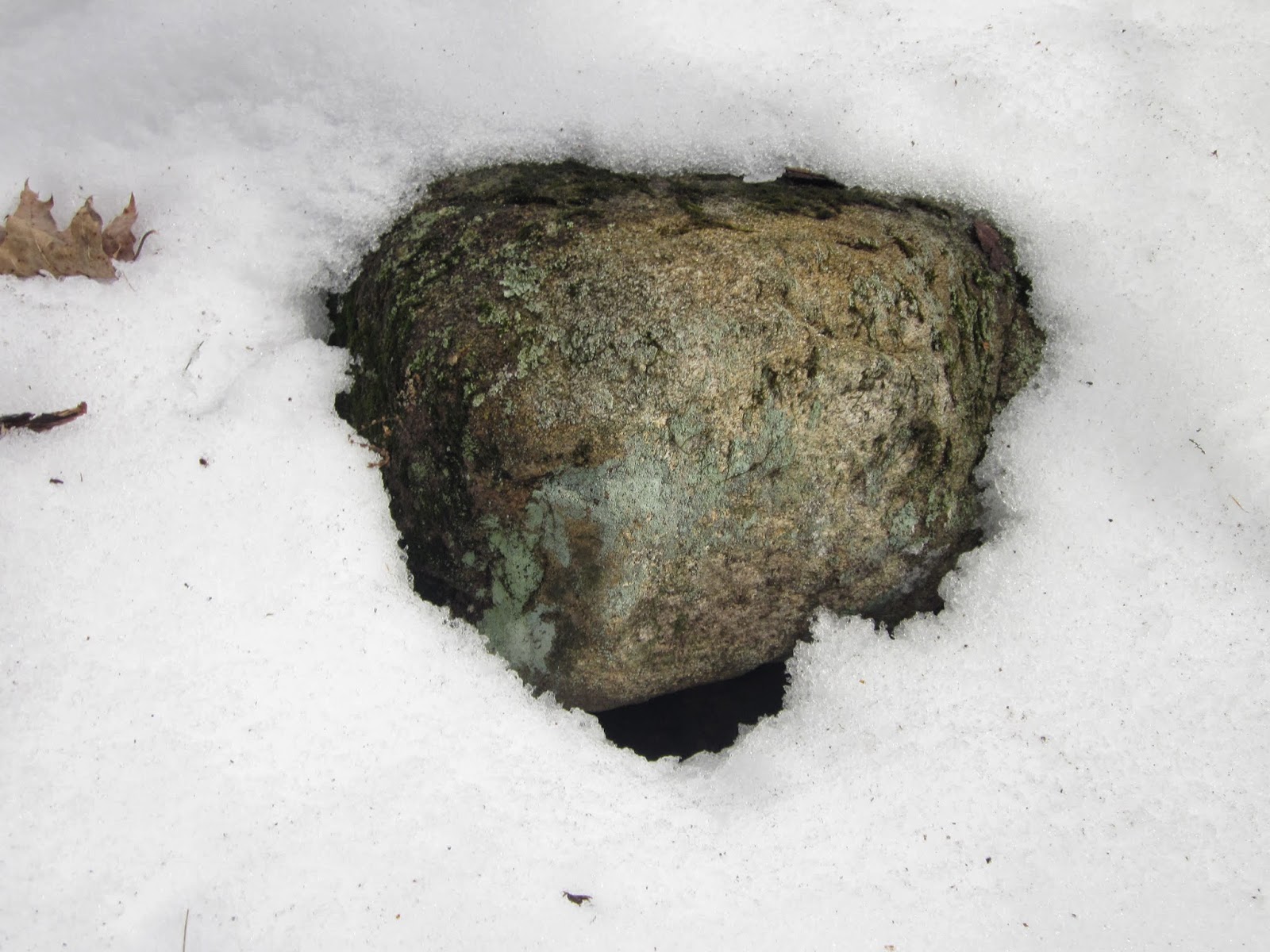 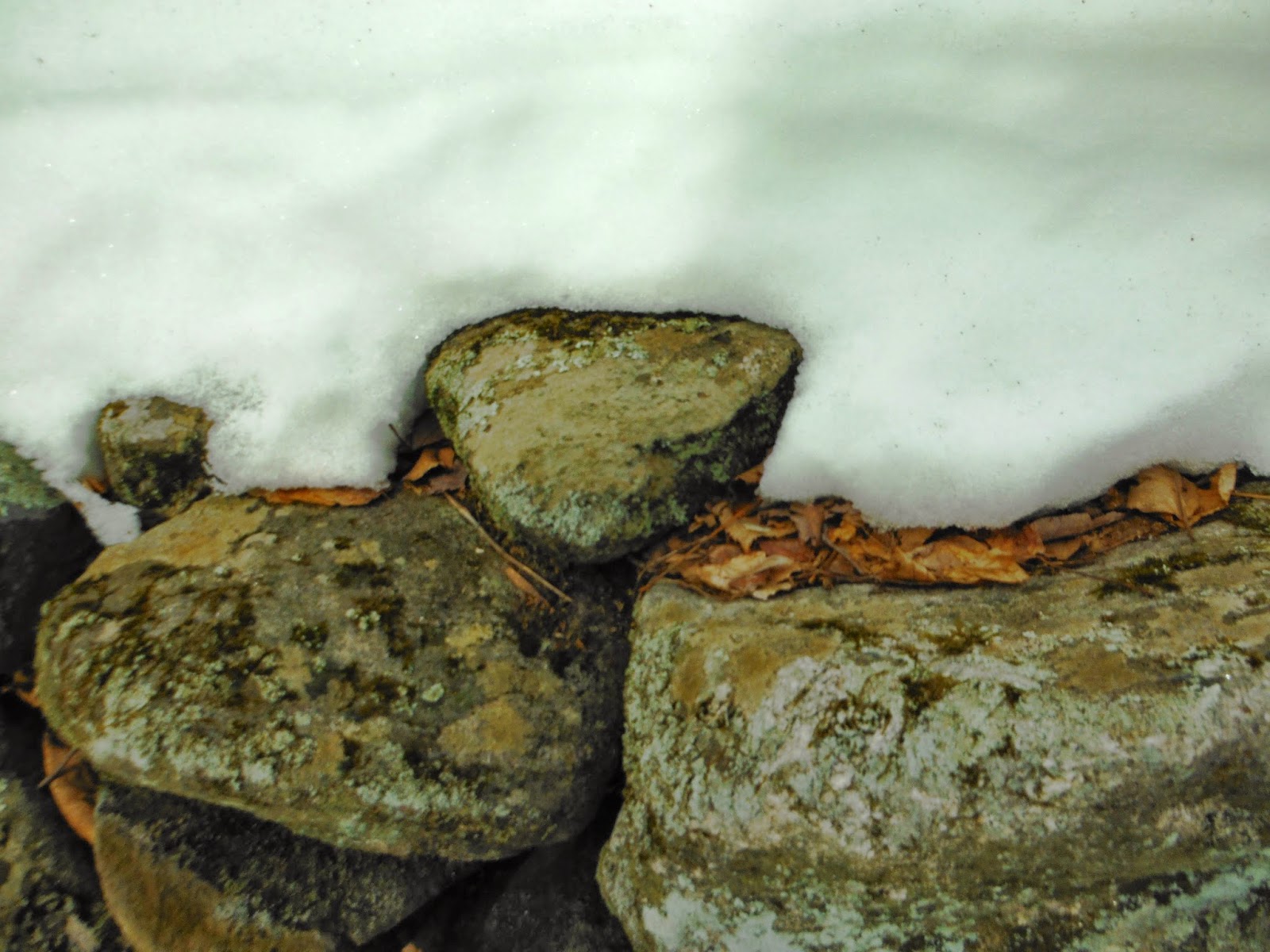 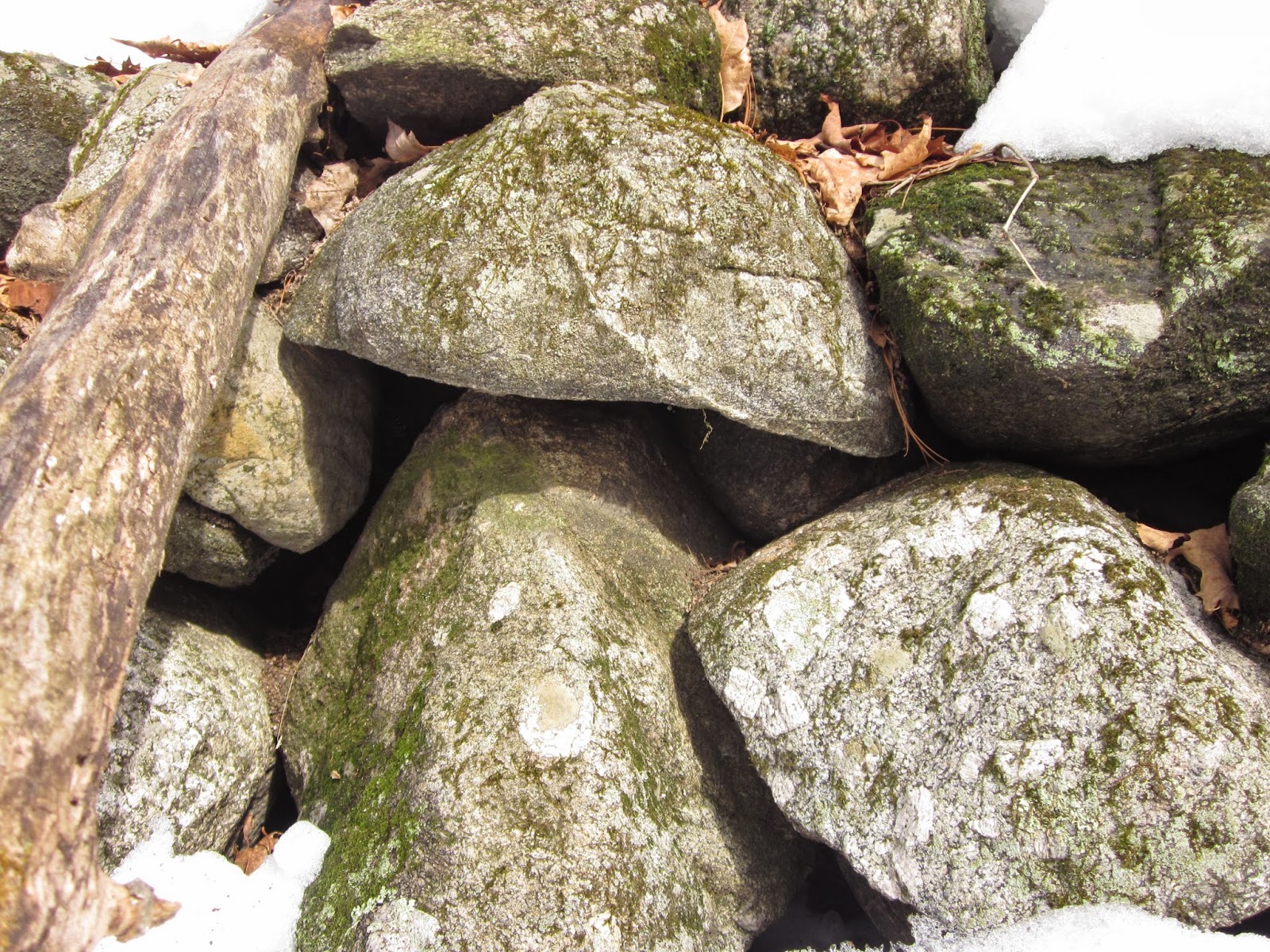 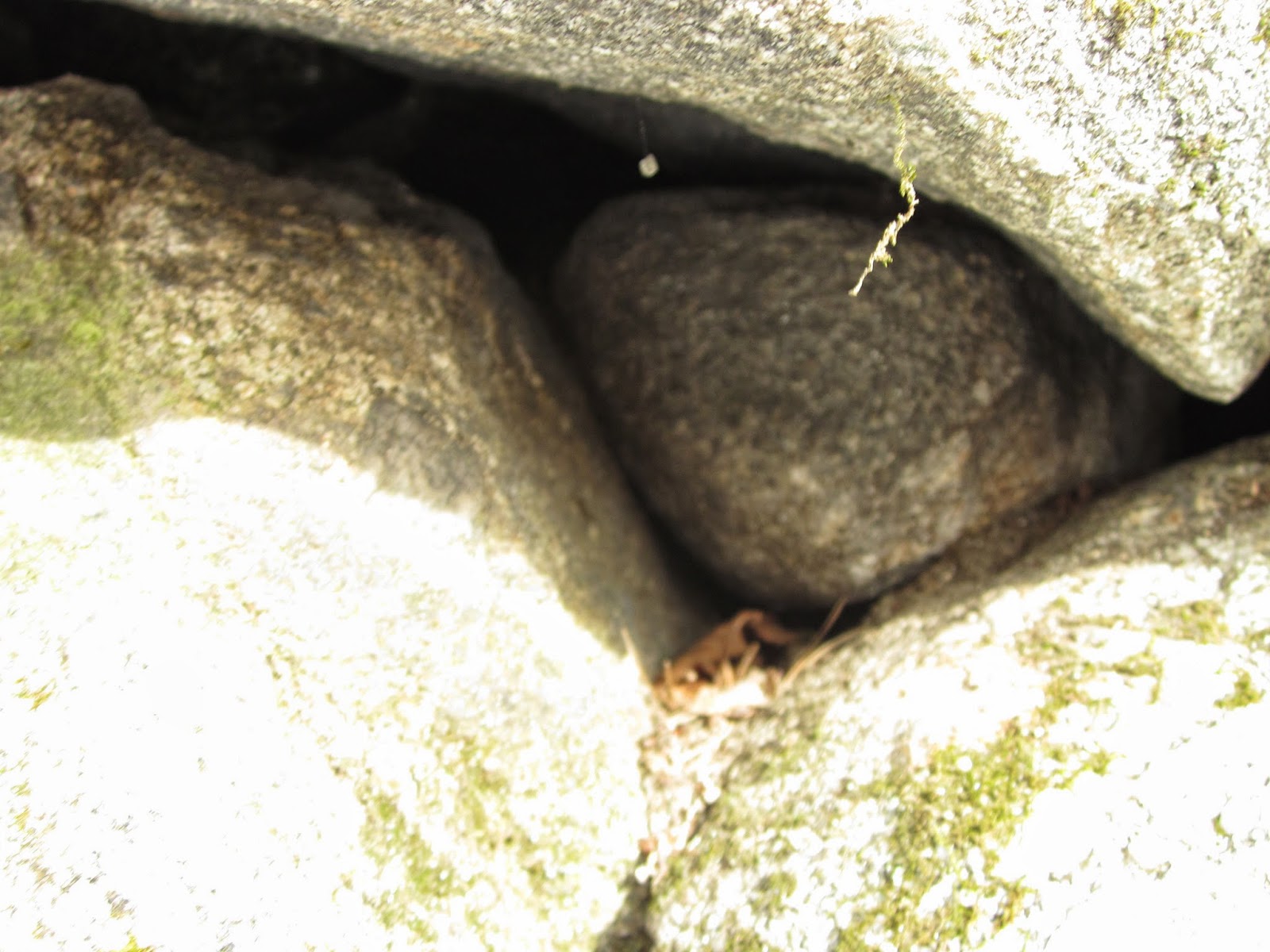 And there's another repeat
Of that artistic pattern...
And stepping back, well there's one more
Of a different sort I've seen before... 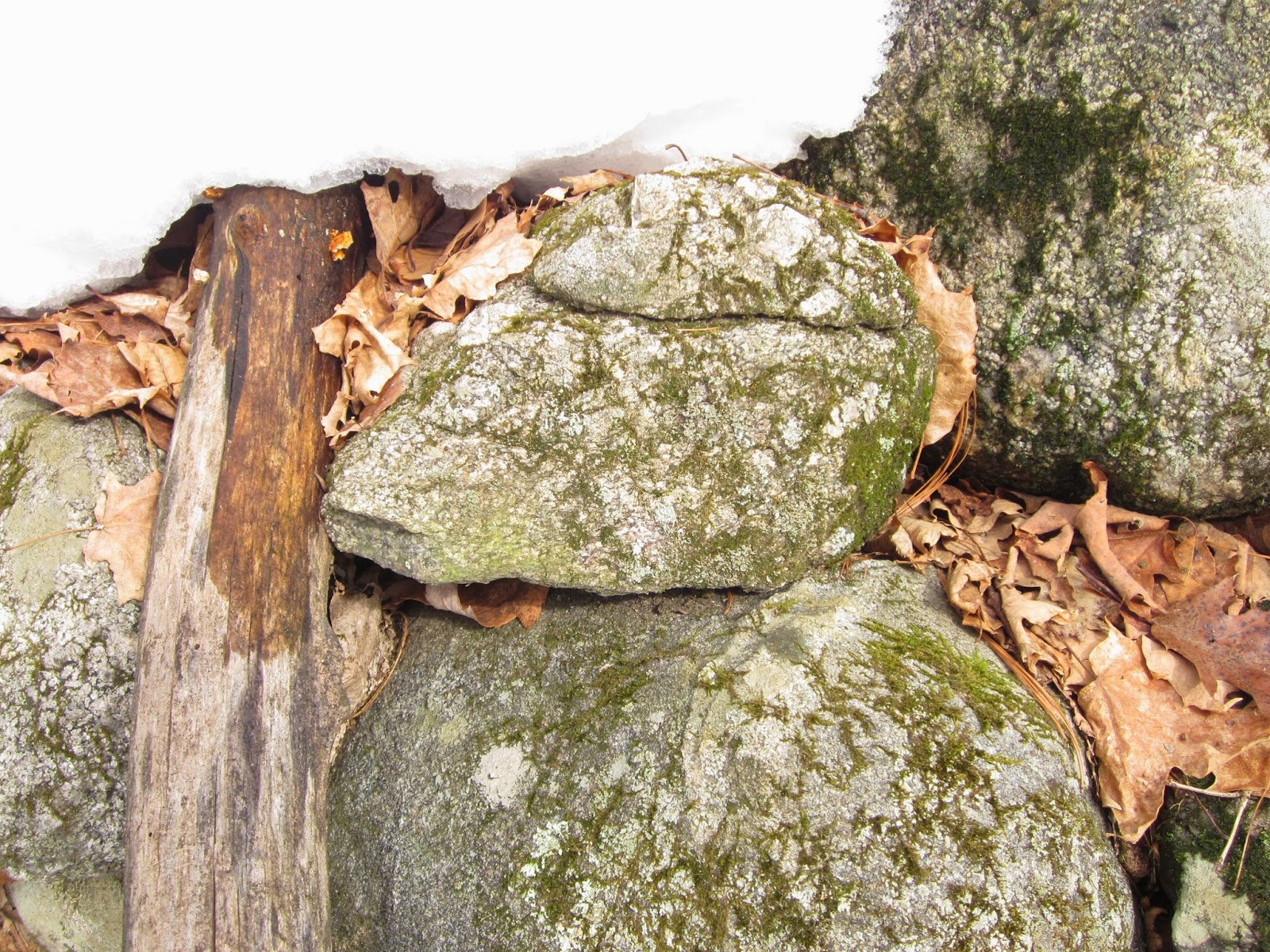 Walking back, I see a different view
And capture that one too.
I wonder if they might be tools,
Especially that foot that resembles a hammer stone... 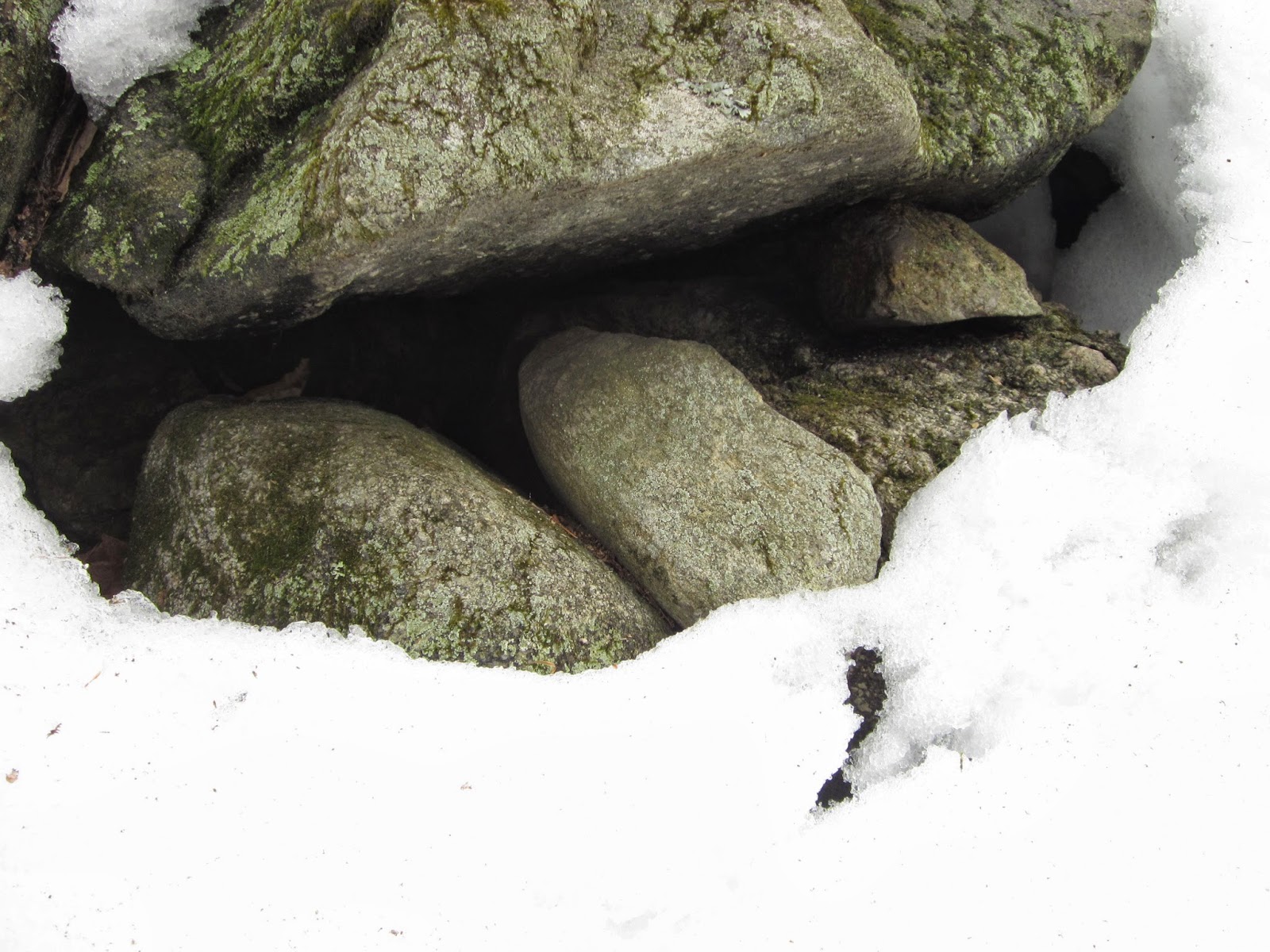 I can't help but think
This was carefully and purposely done,
But the "Why?" of it eludes me,
The human choice to place these just so... 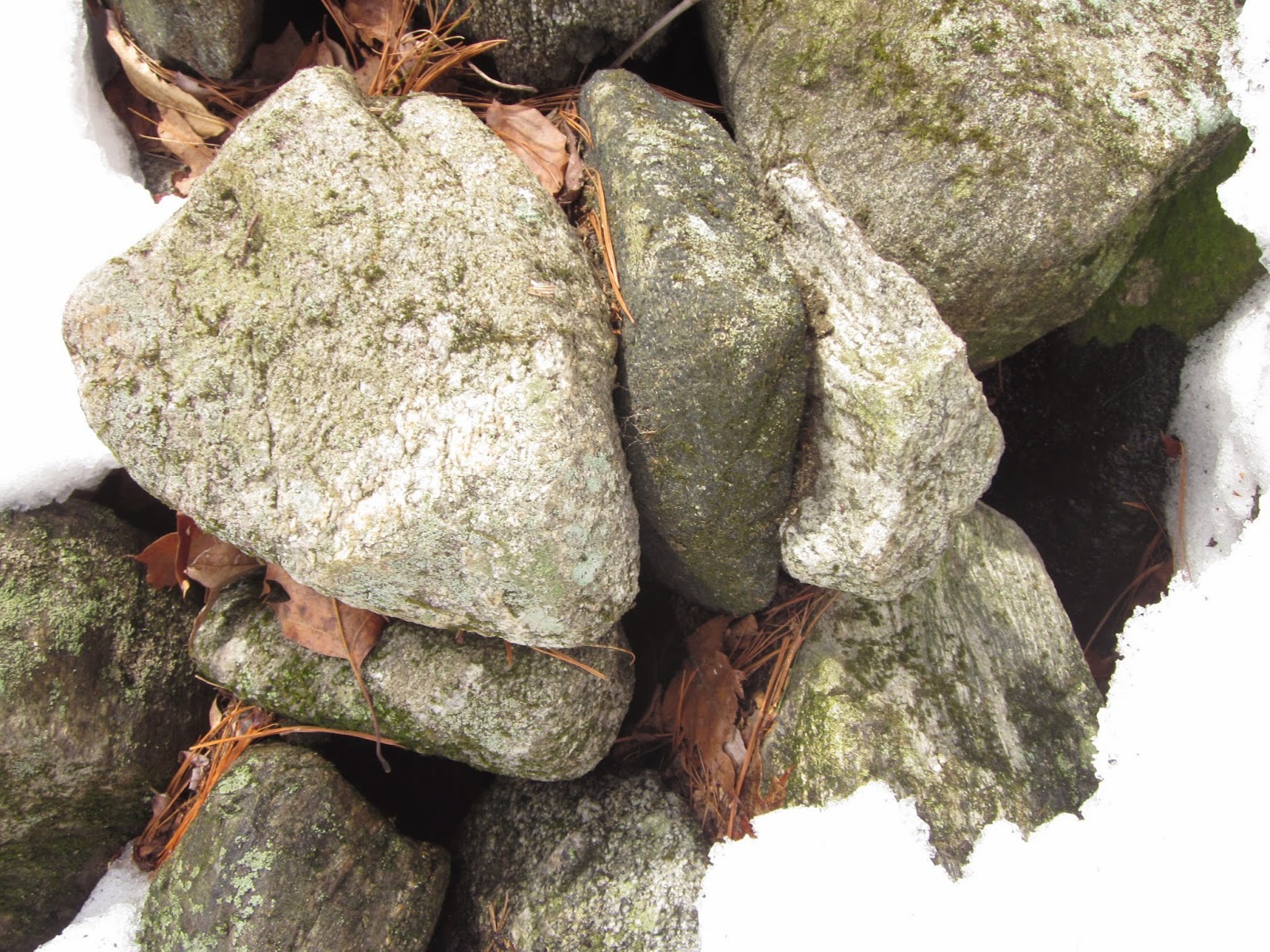 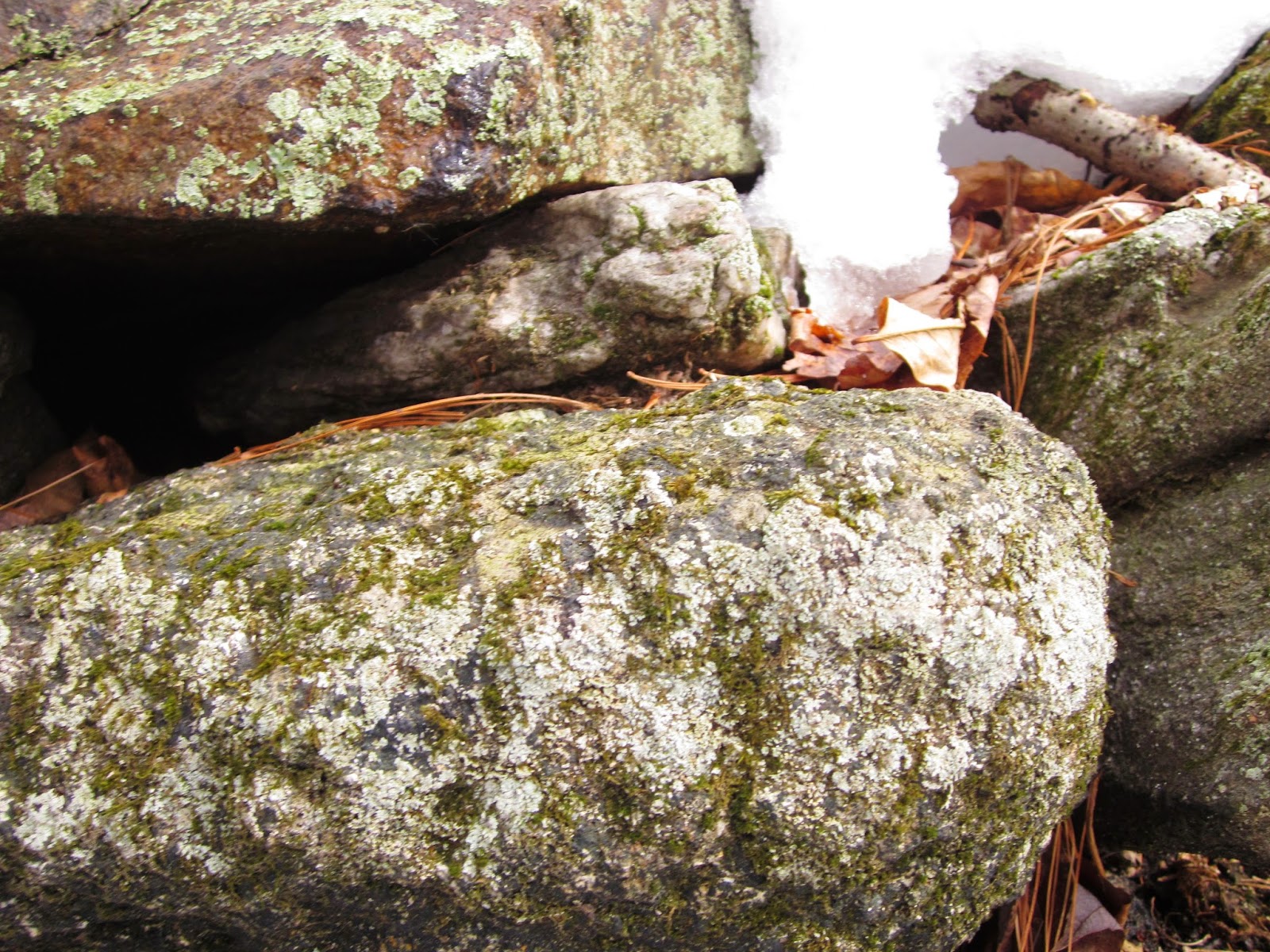 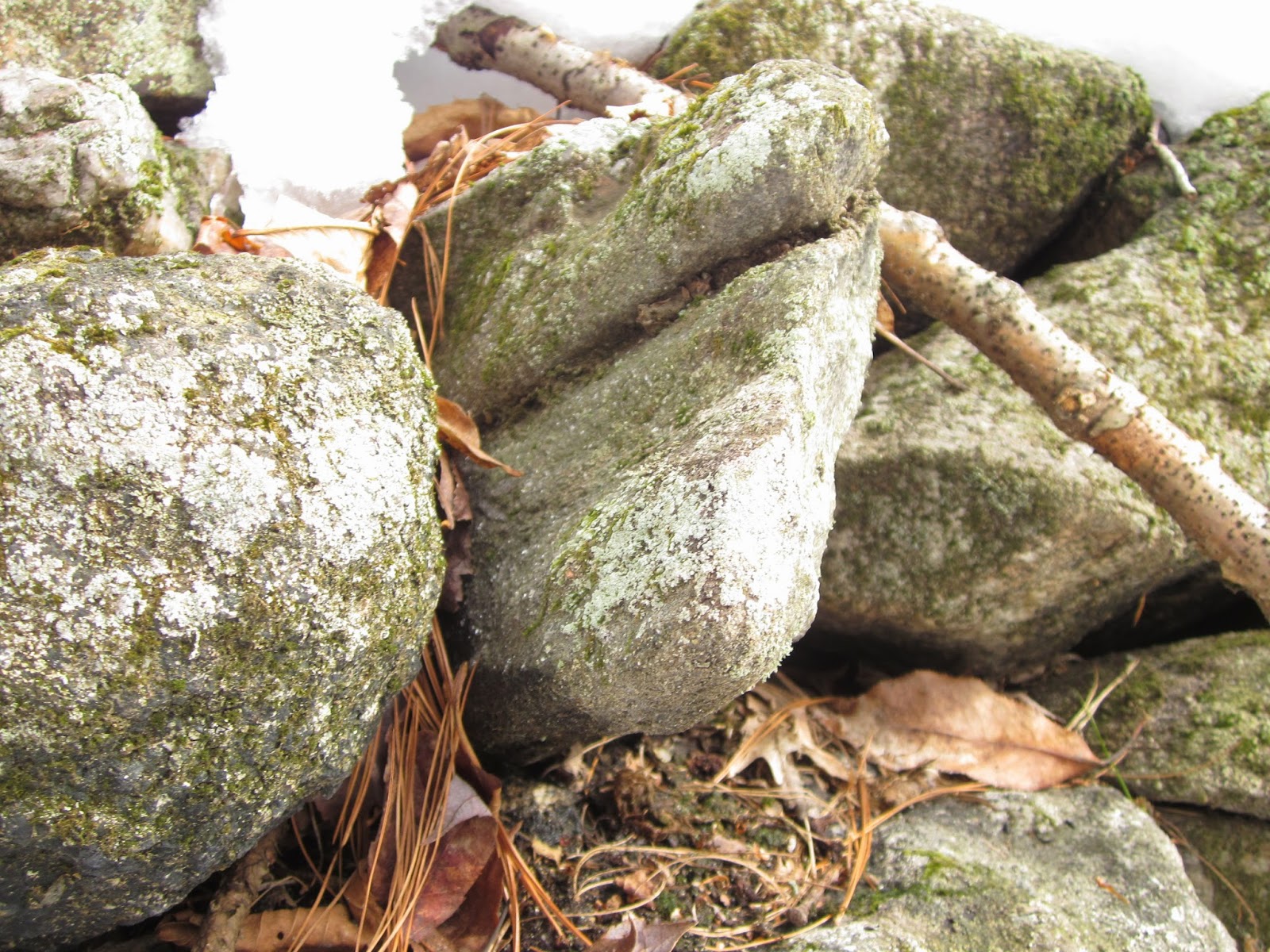 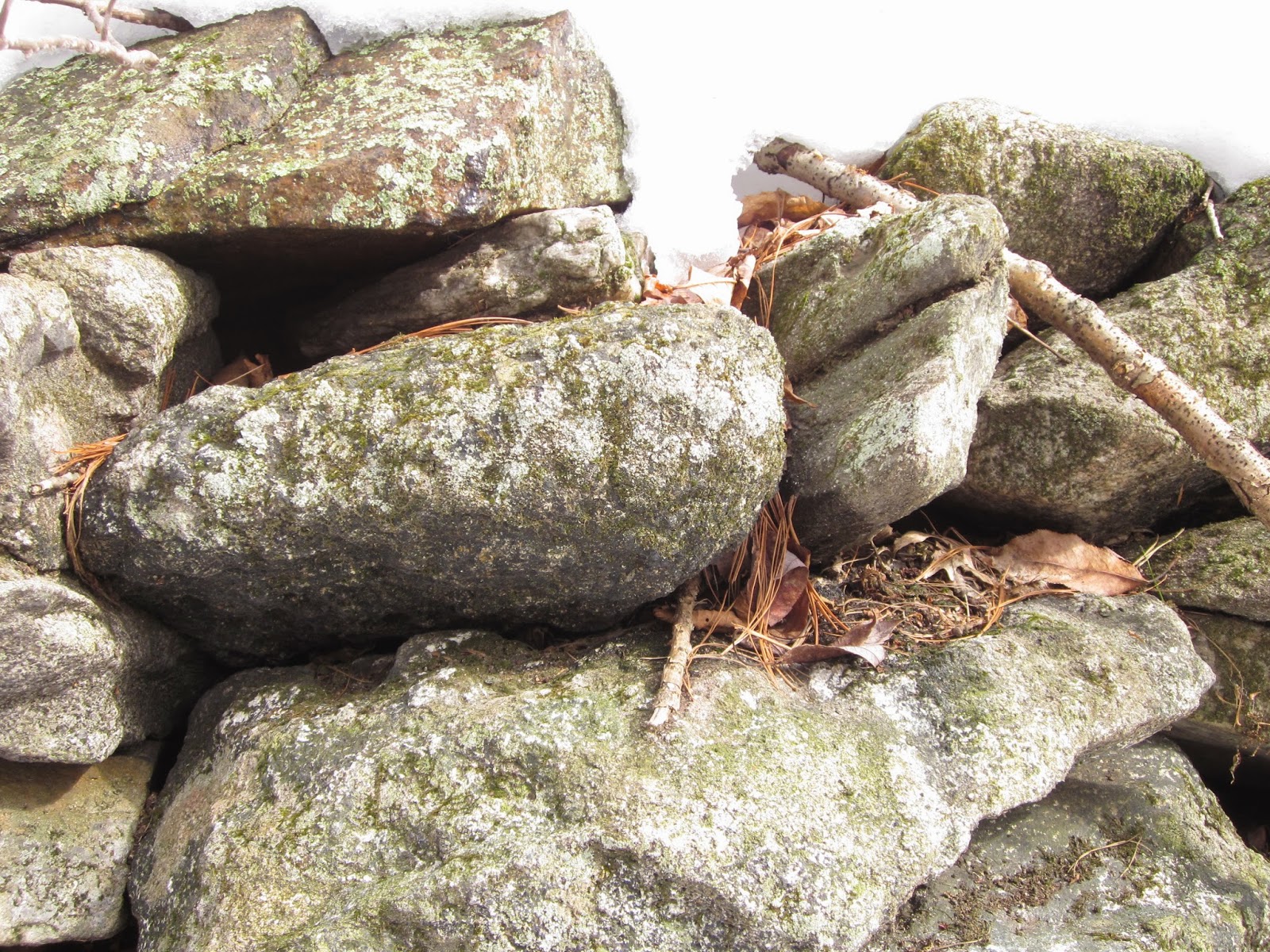 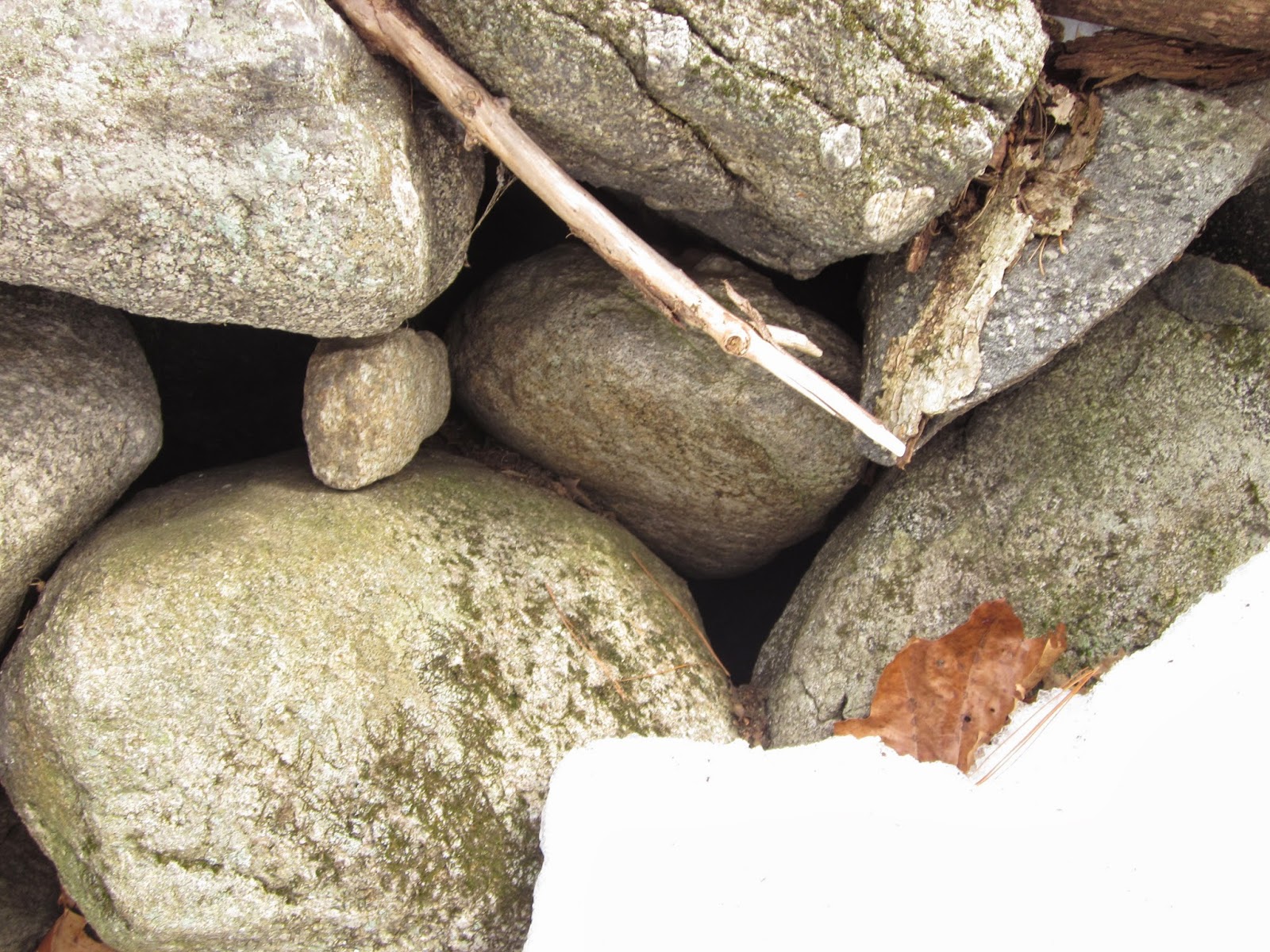 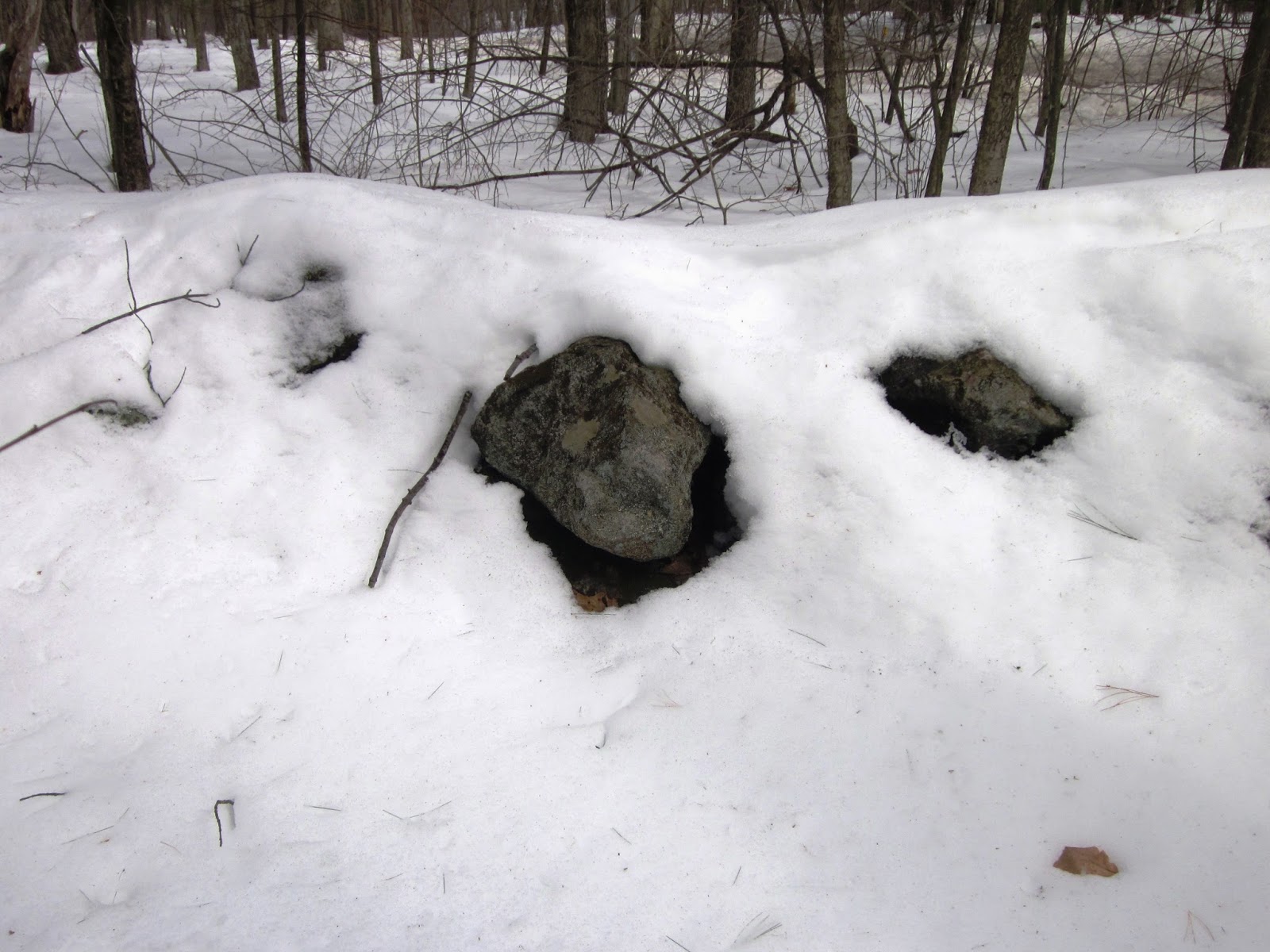 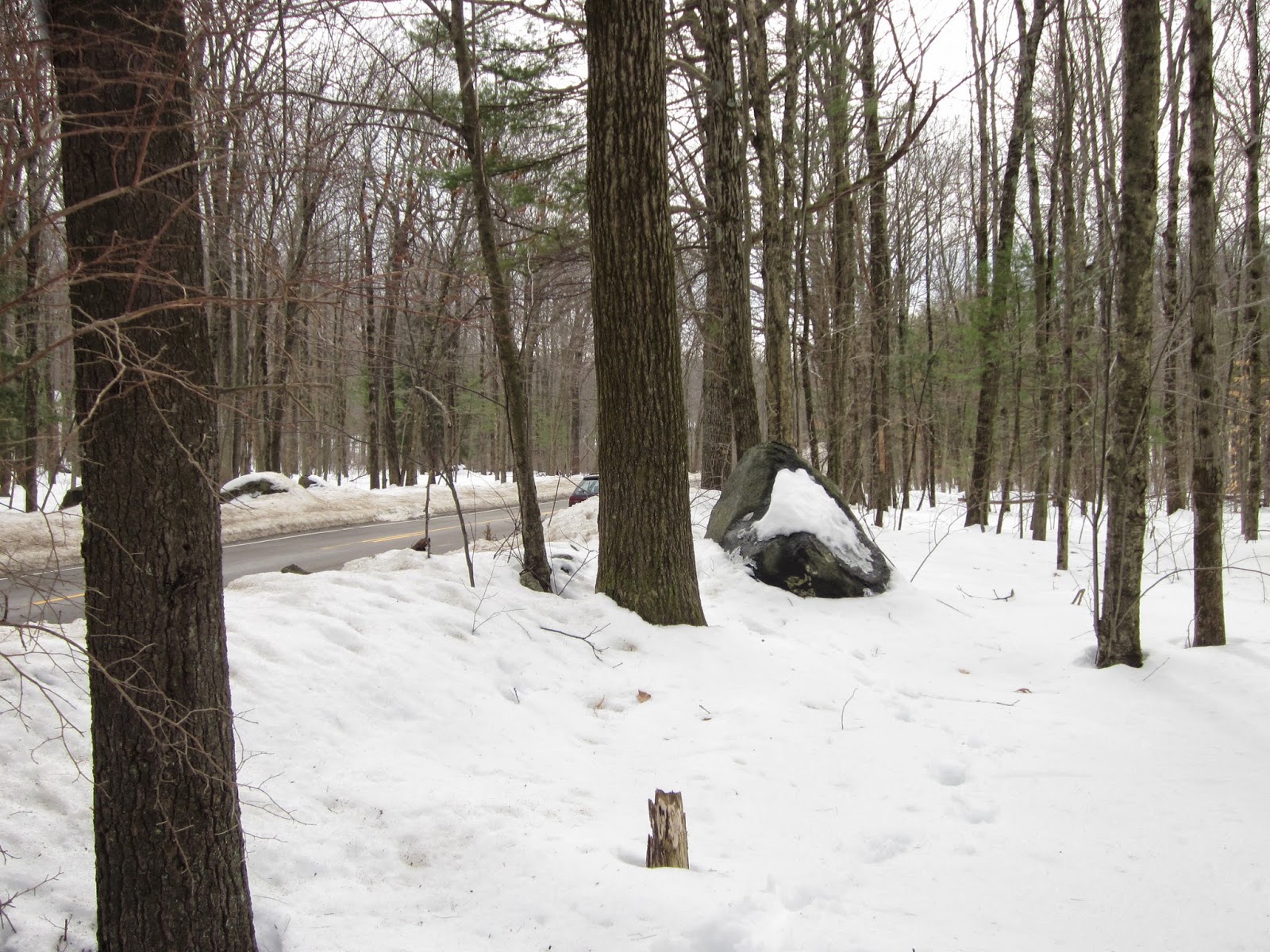 Two rows of stones,
With a trail in-between 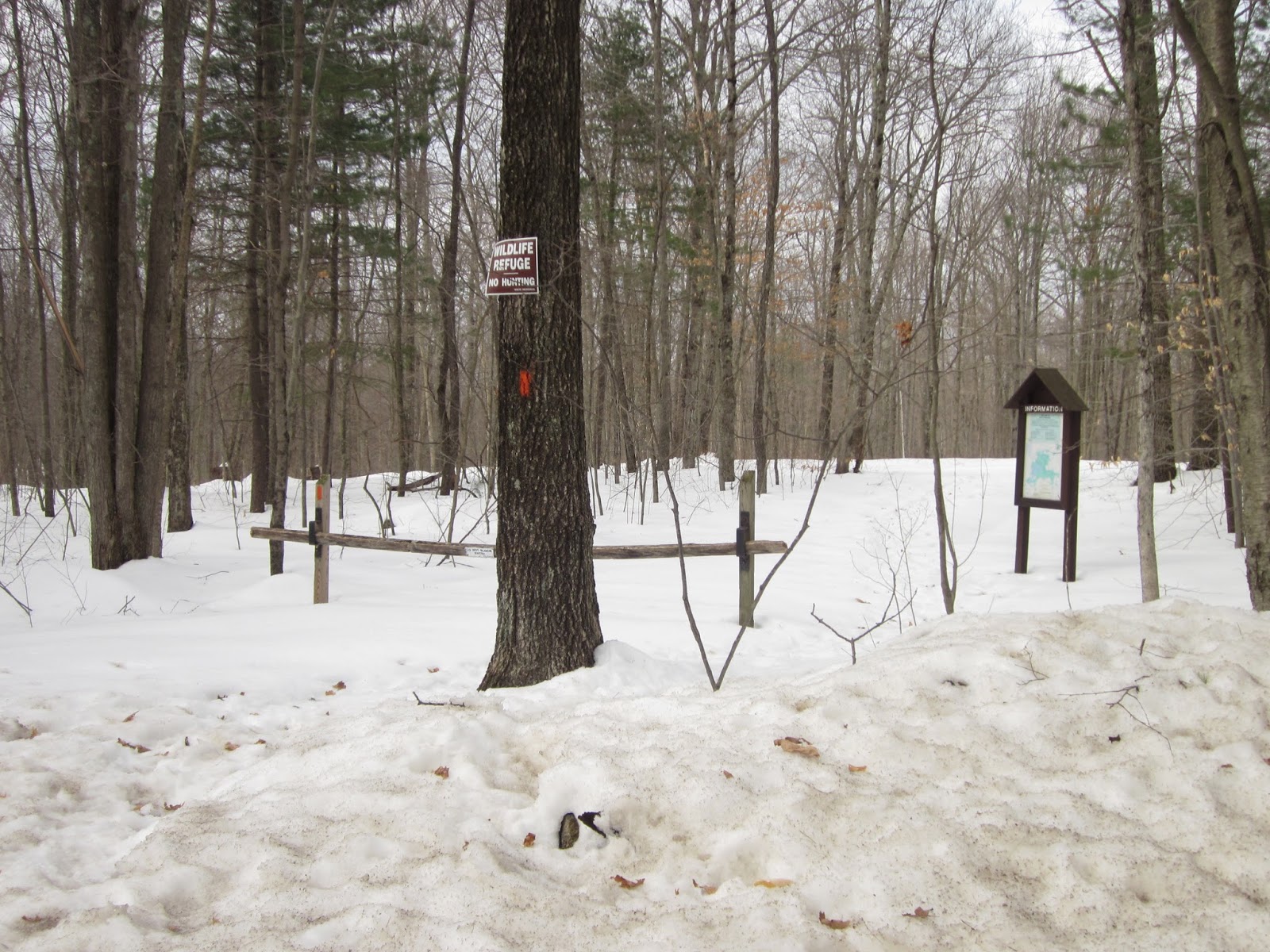 Where I think the best things
Are seen when you get "Off the Path,"
As a "real poet" named Gary Snyder once wrote:
A path is something that can be followed, it takes you somewhere. "Linear."What would a path stand against?"No path."Off the path, off the trail.So what's off the path?In a sense everything else is off the path.The relentless complexity of the world is off to the side of the trail.For hunters and herders trails weren't always so useful.For a foager, the path is not where you walk for long.Wild herbs, camas bulbs, quail, dye plants, are away from the path.The whole range of items that fulfill our needs is out there.We must wander through it to learn and memorize the field 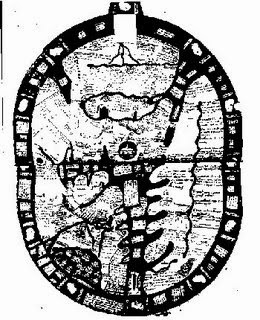 --rolling, crinkled, eroded, gullied, ridged (wrinkled like the brain) -- holding the map in mind.
This is the economic-visualization-meditation exercise of the Inupiaq and Athapaskans of Alaska of this very day.


http://www.albany.edu/~litmag/archives/vol213/map.html
Posted by Tim MacSweeney at 10:02 AM