More on the 7 Stone Heaps 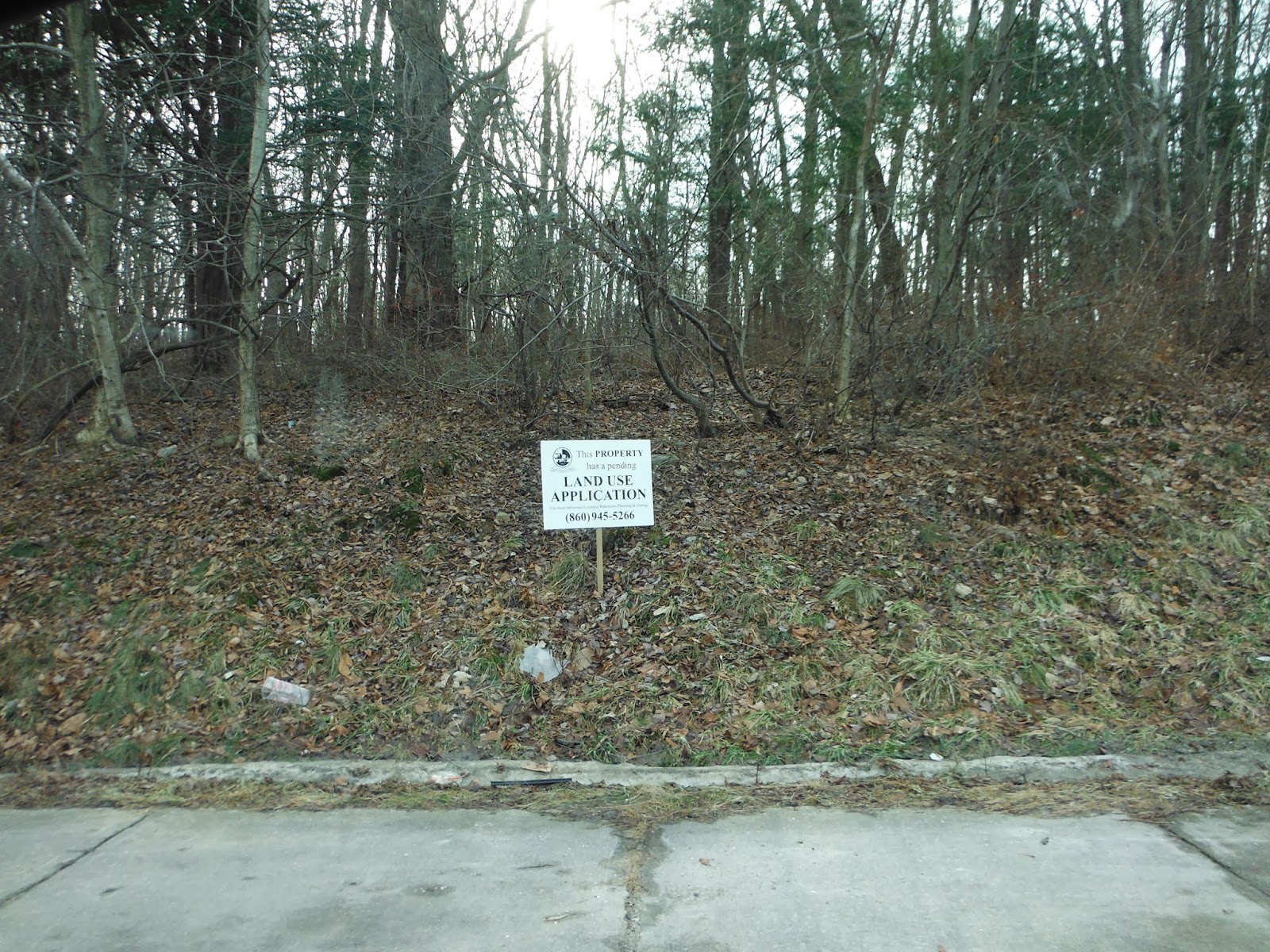 I just noticed this sign the other day as I was on the way to the place I work. It’s on the edge of what I think of as my old neighborhood. It’s the borderline of my hometown Watertown, just about on the town line of Waterbury CT. I did time as a paper boy, walking up to this section of Bunker Hill where my route ended just past this spot. I remember thinking, as I passed by the other day, that I’d never spent any time as a young kid exploring this little bit of woodland in the 1960’s, since it was claimed by another bunch of kids who were prone to throwing apples at you when apples were in season and then throwing rocks at you when they weren’t.
(Re-reading the above, I realize that an important point is that the drive takes me from one Indigenous Village site to another. I’m travelling from the historically known Nonnewaug Wigwams, which in the big scheme of things is relatively minimally developed, and Mattatuck, an abandoned pre-contact Village. I leave my home on Nonnewaug Road, a former Indian Trail still bounded by remnants of stone rows, travel briefly on Bethlehem Road where the stones have almost entirely disappeared, and then along the Quassapaug Road, another former Trail that still has remnants of zigzags on either side of it too. I turn onto Bunker Hill Road, still with a little bit of remaining zigzags bordering it for just a brief while. I’m old enough that I can remember some of the stone “walls” that have now disappeared, sometimes gratified that I can back that up sometimes with 1965 aerial photos from http://www.cslib.org/aerials/ - and see what existed back in 1934.)
Looking East on a Bing Bird’s Eye View below is halfway decent capture of the little remnant site that I wandered into after spotting it on Bing, just before I wandered in:

(Above West at top, below East at top) 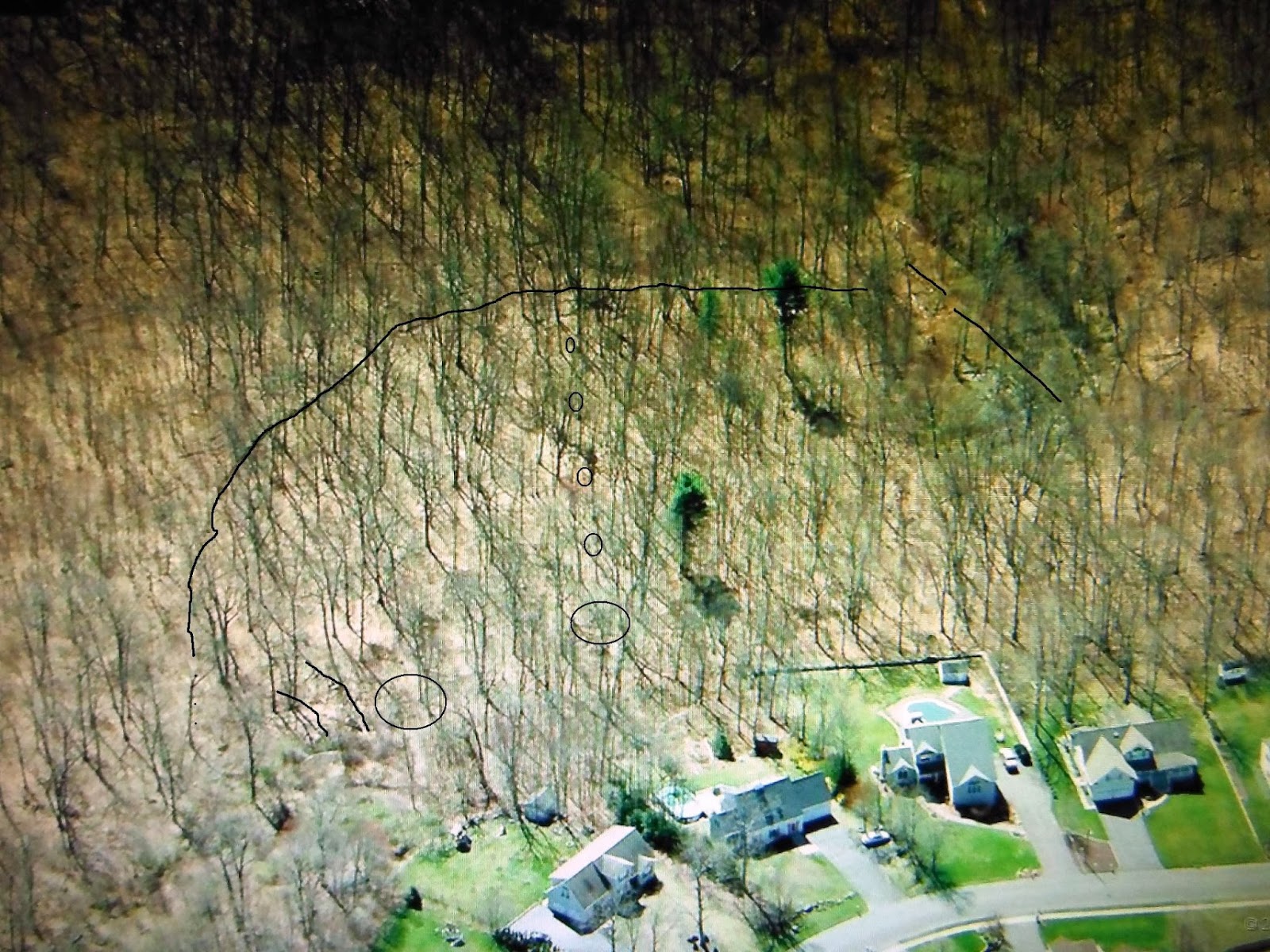 (Take a look for yourself here: http://binged.it/1akeuRl - and if you zoom out, to the west you’ll find another little remnant site I posted about here: http://rockpiles.blogspot.com/2010/11/volvo-car-lot-edge.html where a stained stone on a mound caught Peter’s attention: http://rockpiles.blogspot.com/2010/11/rockpile-on-hamburger-edge-of-hometown.html and http://rockpiles.blogspot.com/2010/11/quartz-stone.html )
I enhanced the rather linear yet curved stacked stone row remnant in black lines. Those wavy lines are possibly an old farm construction over a water feature, and the biggest circles are approximate locations of two large piles of stones, the smaller are smaller heaps that lead back to the stone row (there are actually five I took photos of, not four).
I walked up from some trails and rocky wetlands and first saw the stone row (looking West):

(Looking North toward the curve, about where the mounds line up on the stone row:) 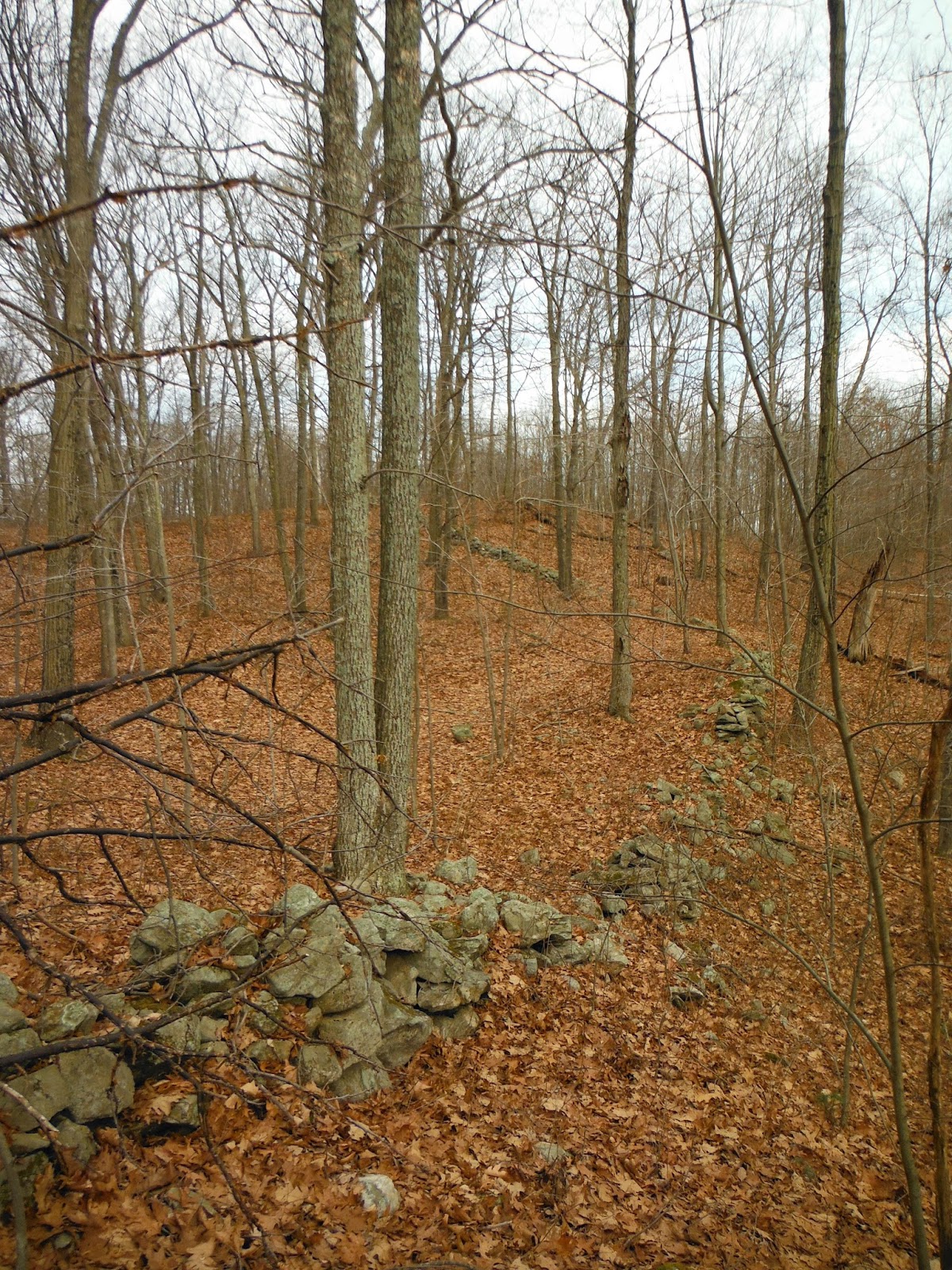 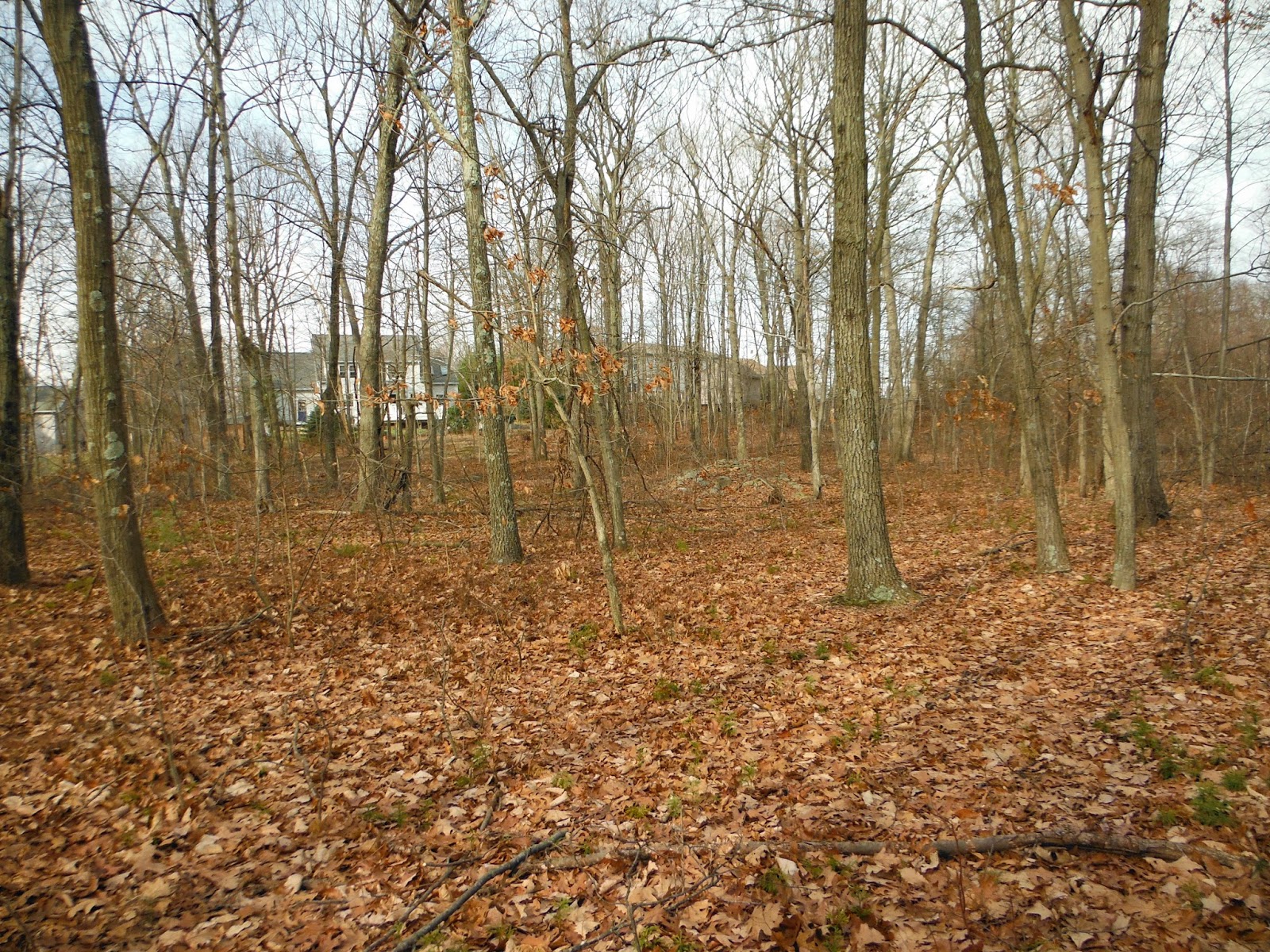 Looking NNW above, WSW below... 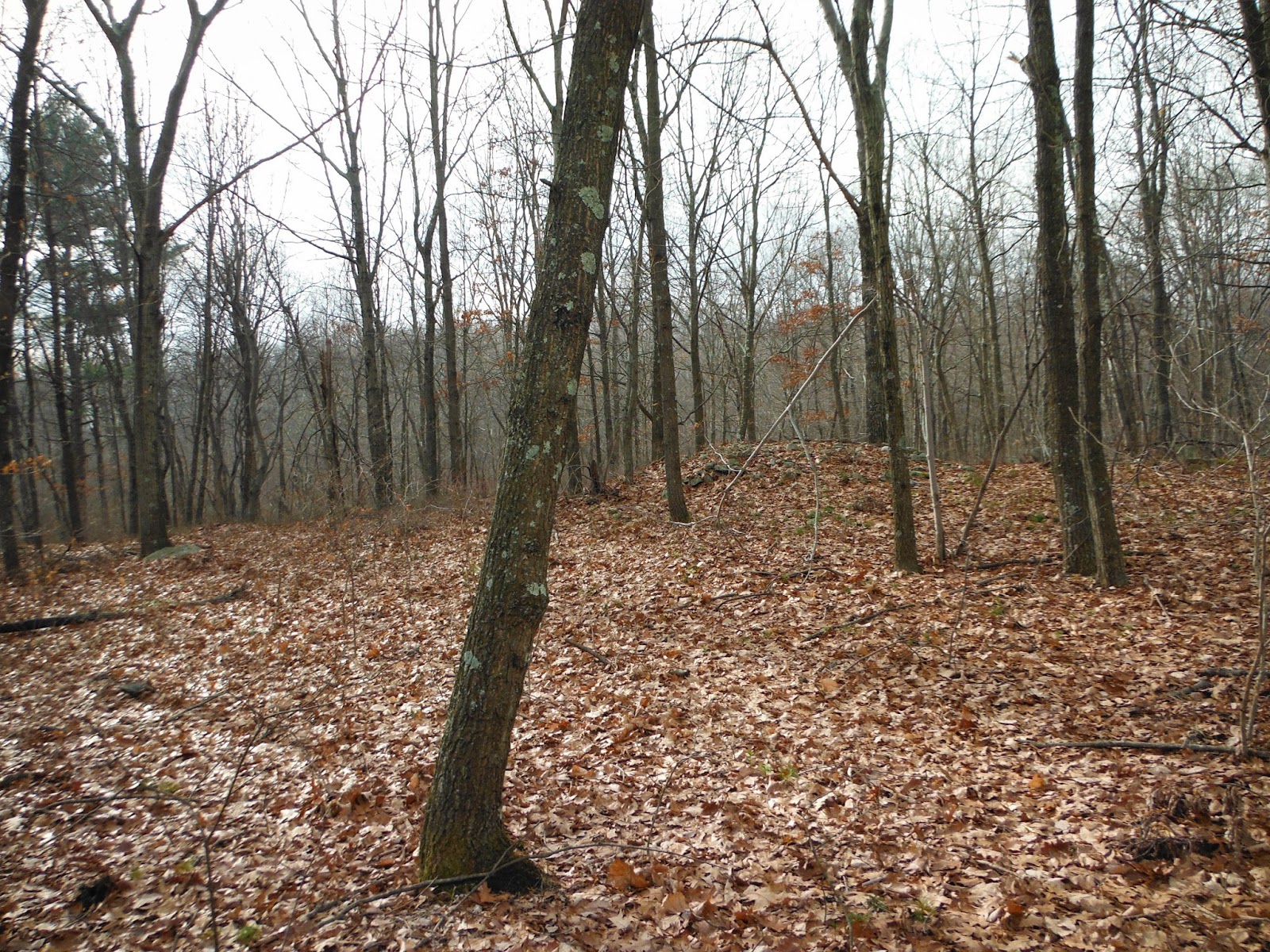 I didn’t get too close to the first mound pictured, but I took a closer look at the second mound. Quartz was present, and possibly there was some sort of careful stacking going on, some kind of structure and/or form, but it was just too leaf covered to tell… 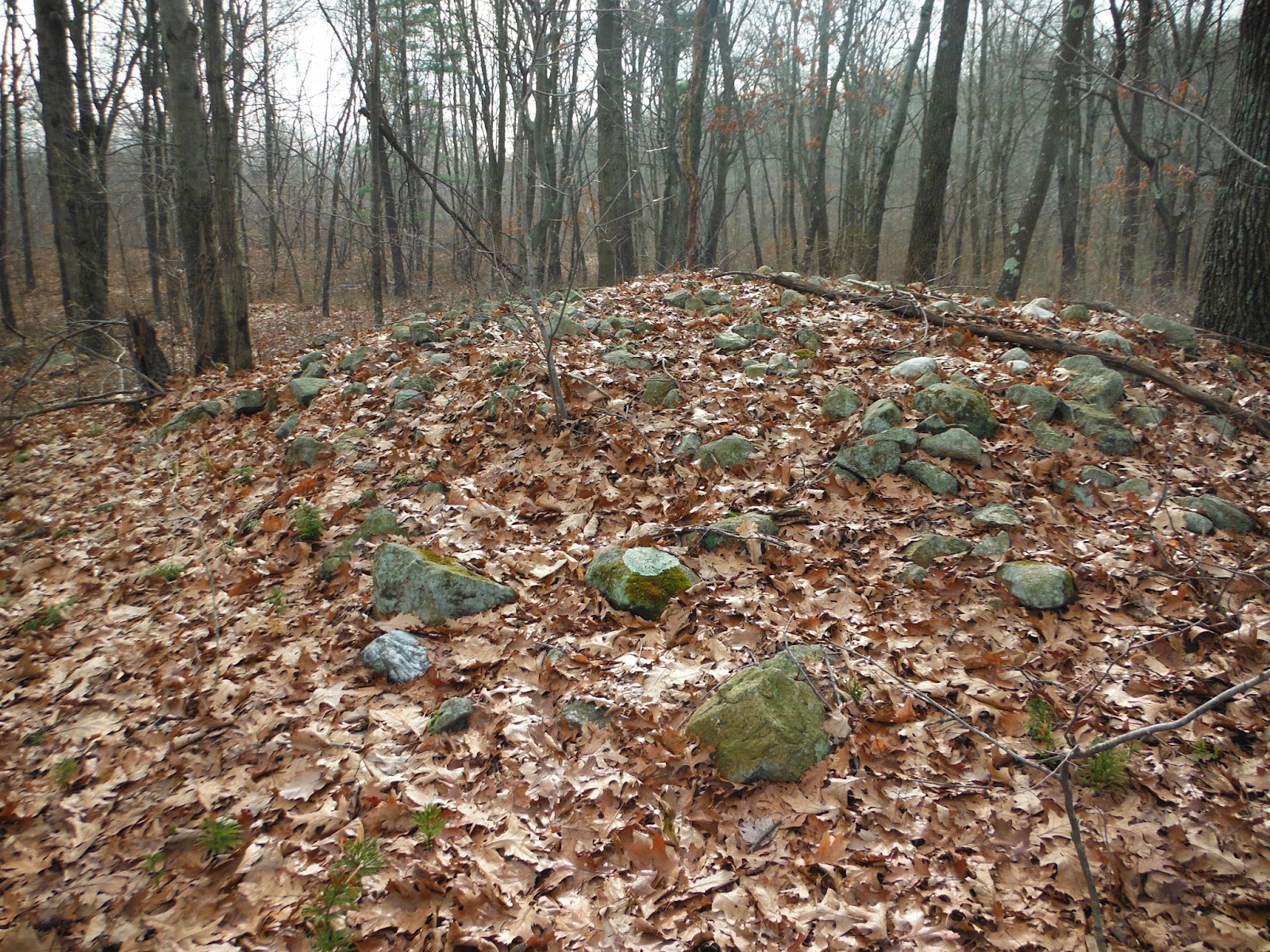 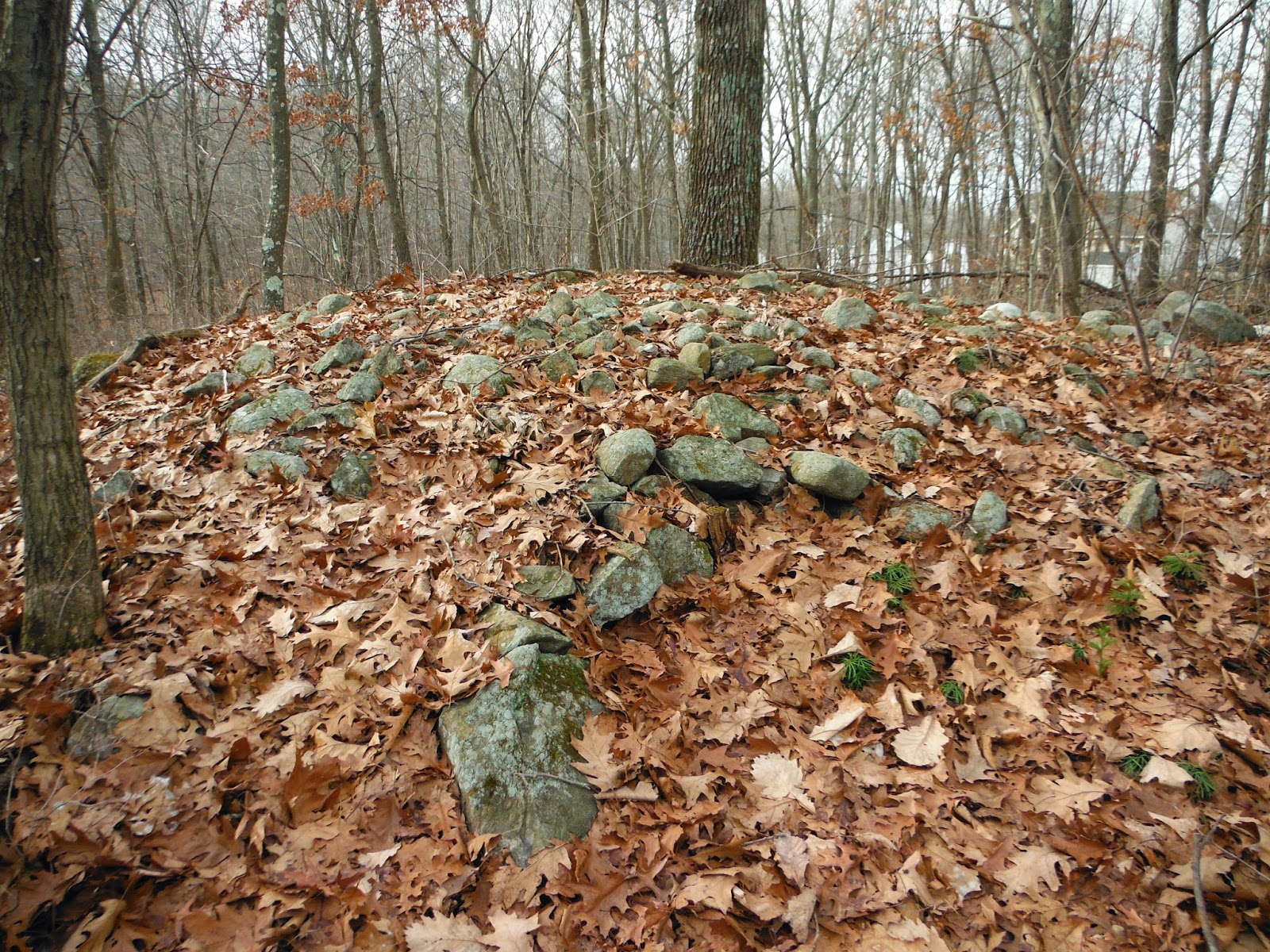 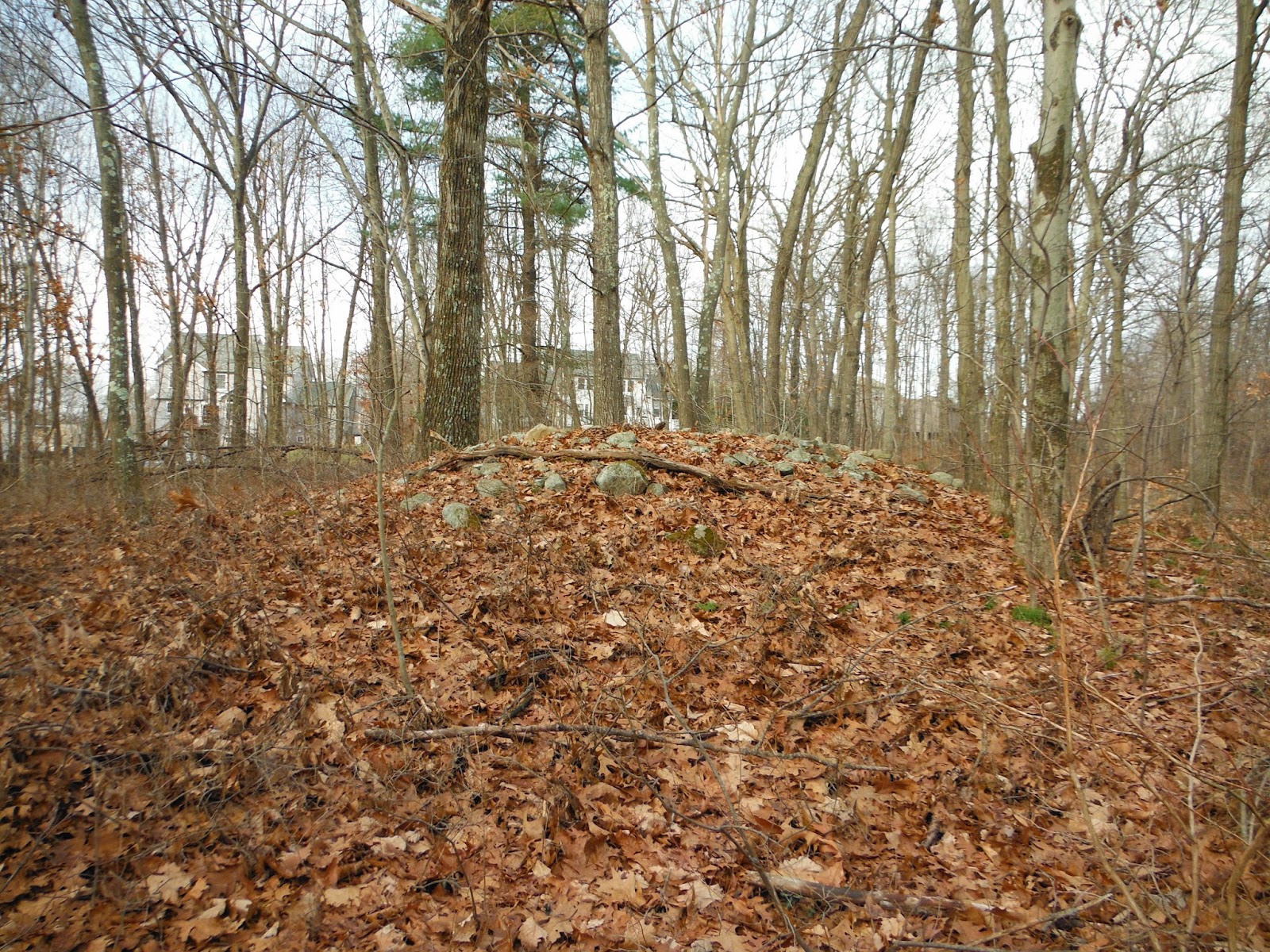 There were five small piles in a row leading east from this mound: 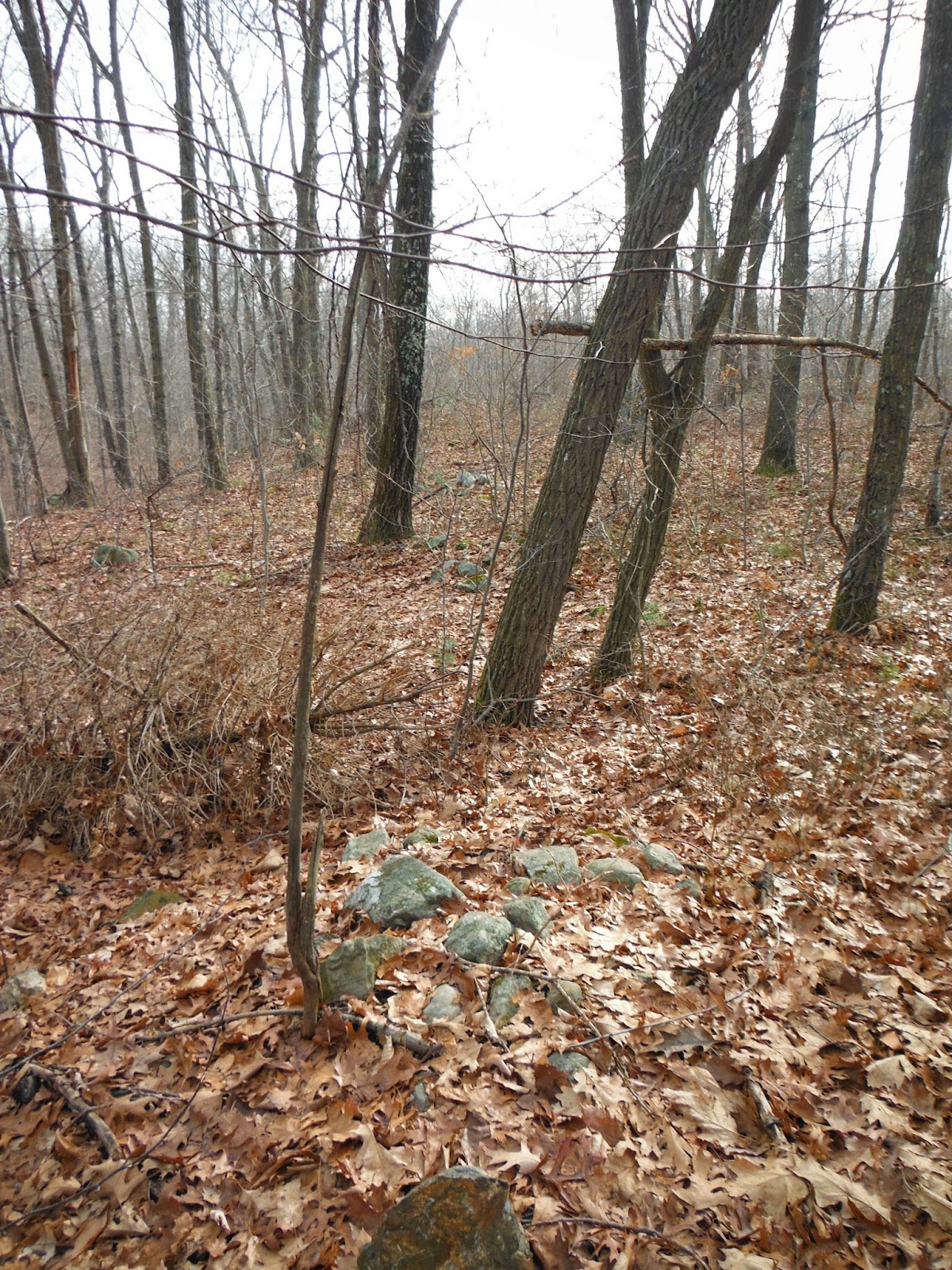 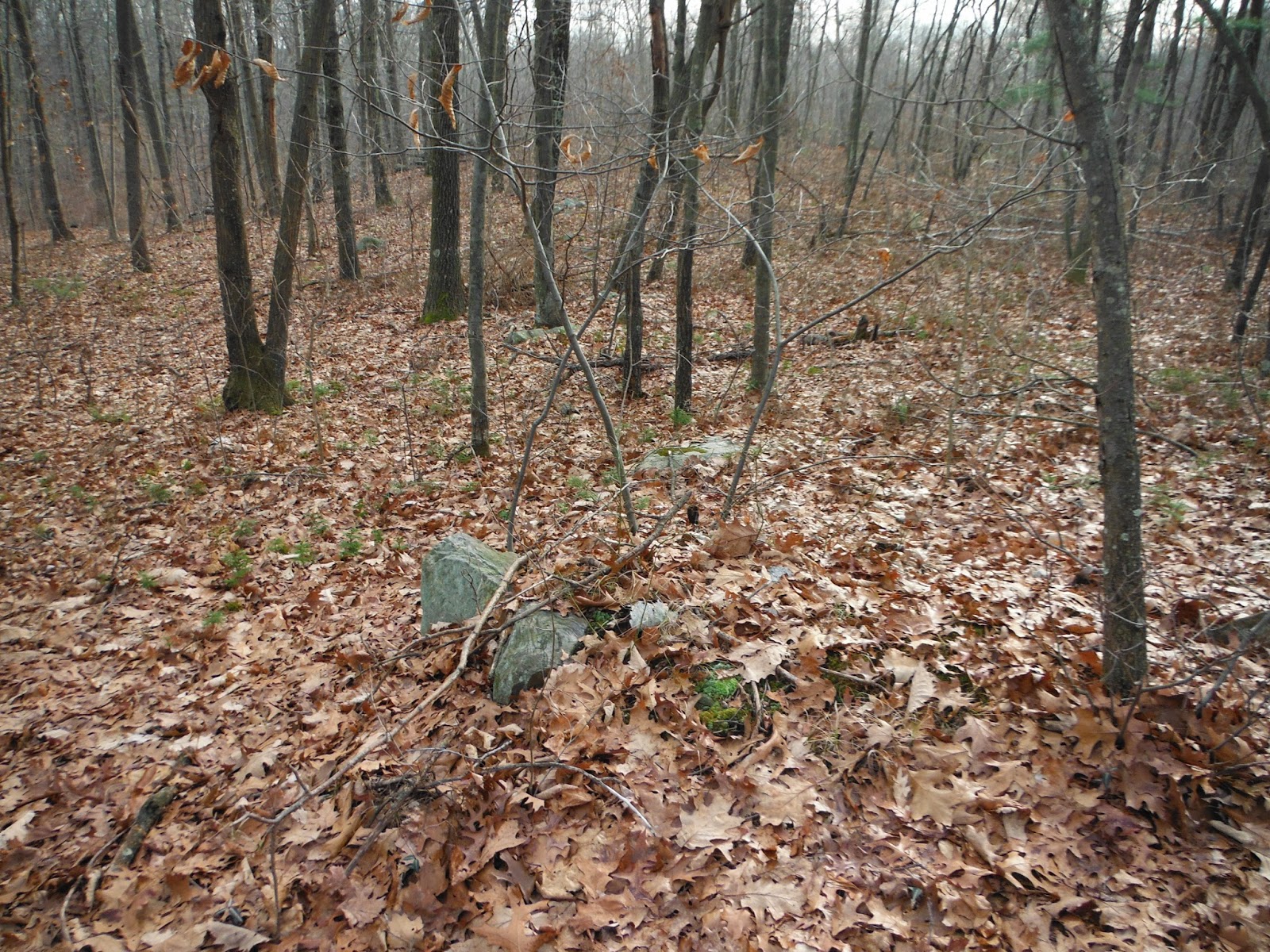 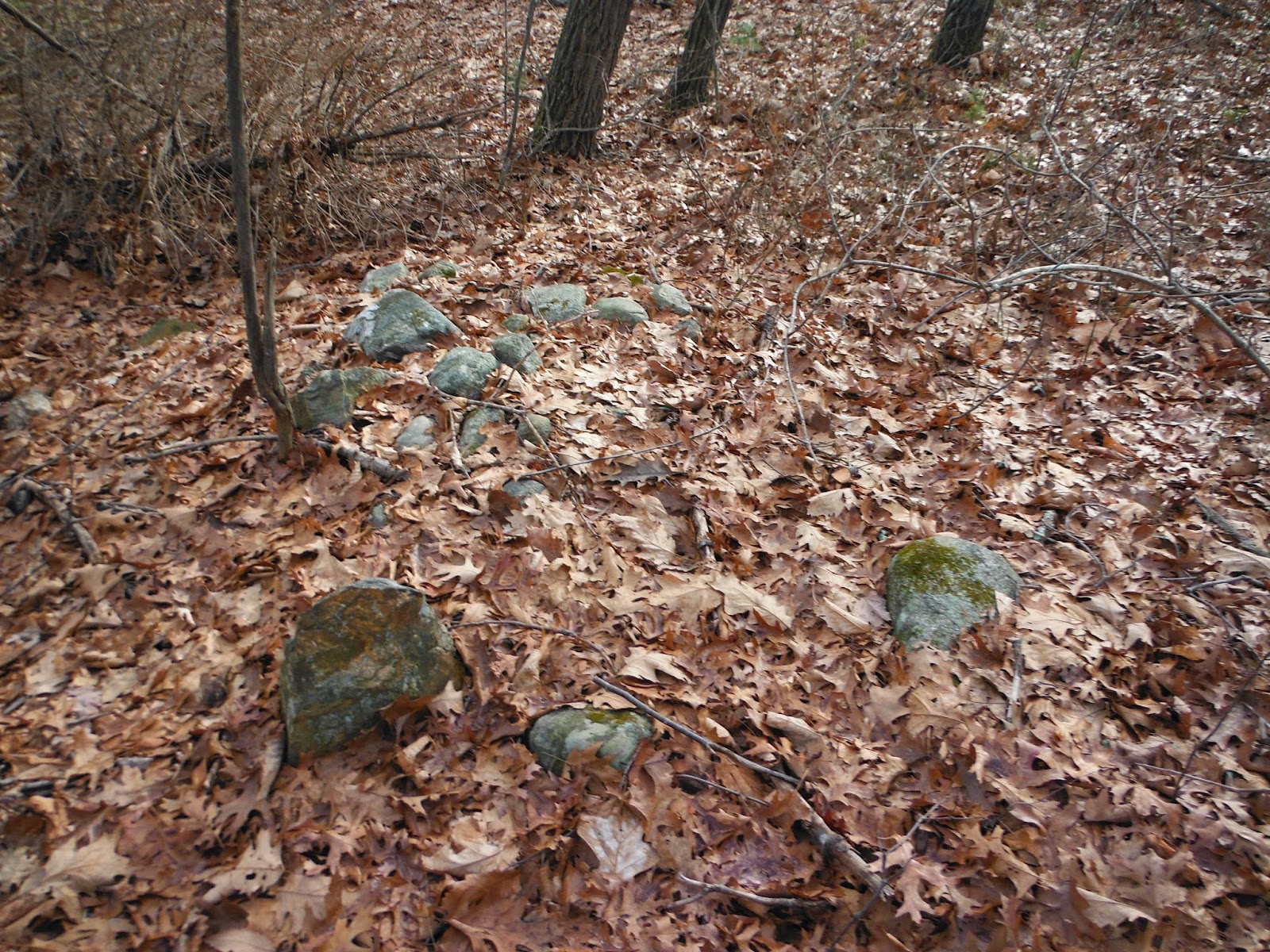 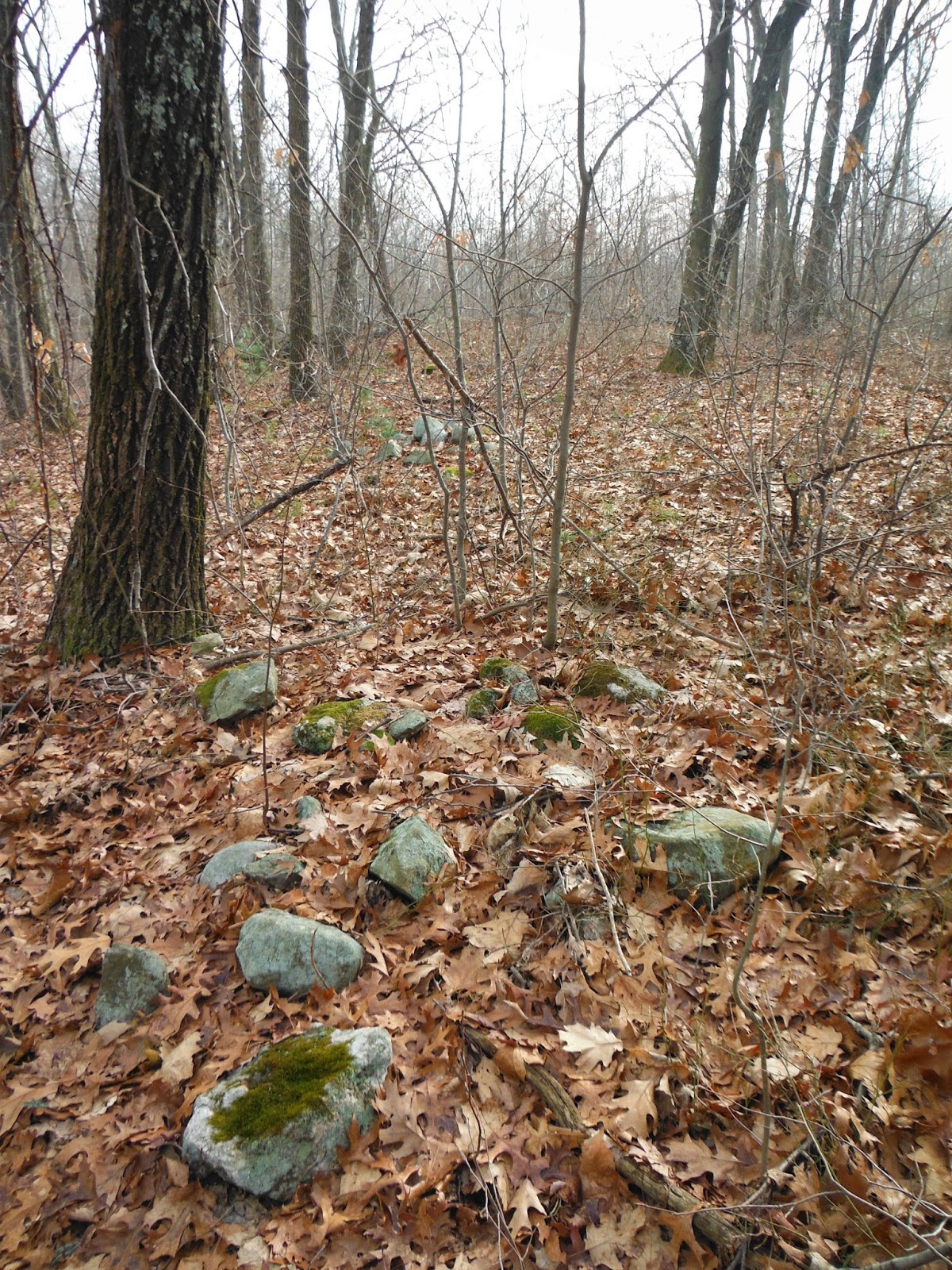 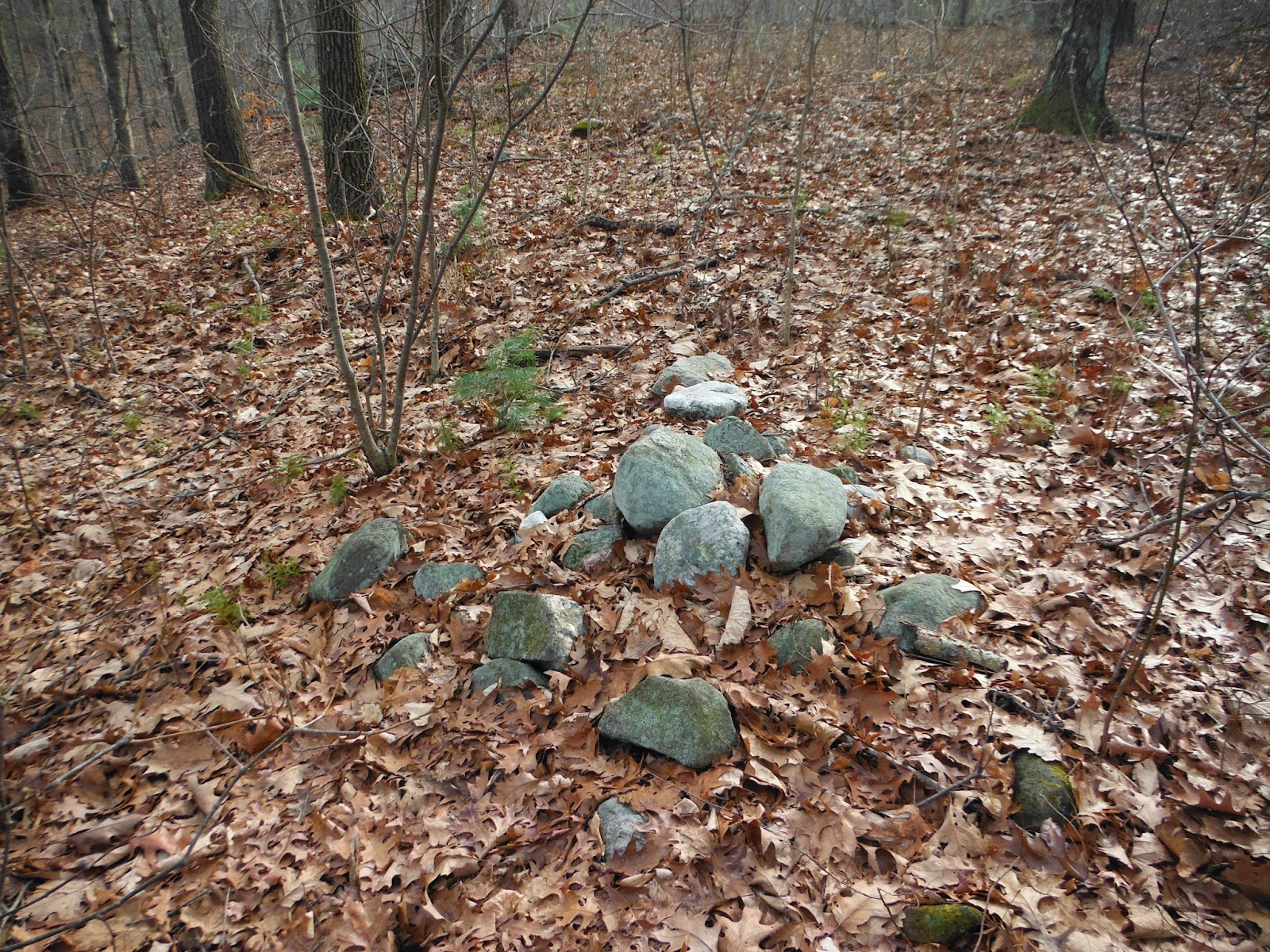 This third mound was the most interesting, a diamond or rhomboid shape perhaps, an eastern sort of branch extending toward the stone row, although that north segment pointed to another portion of row that twisted off westerly and up a small rise in elevation… 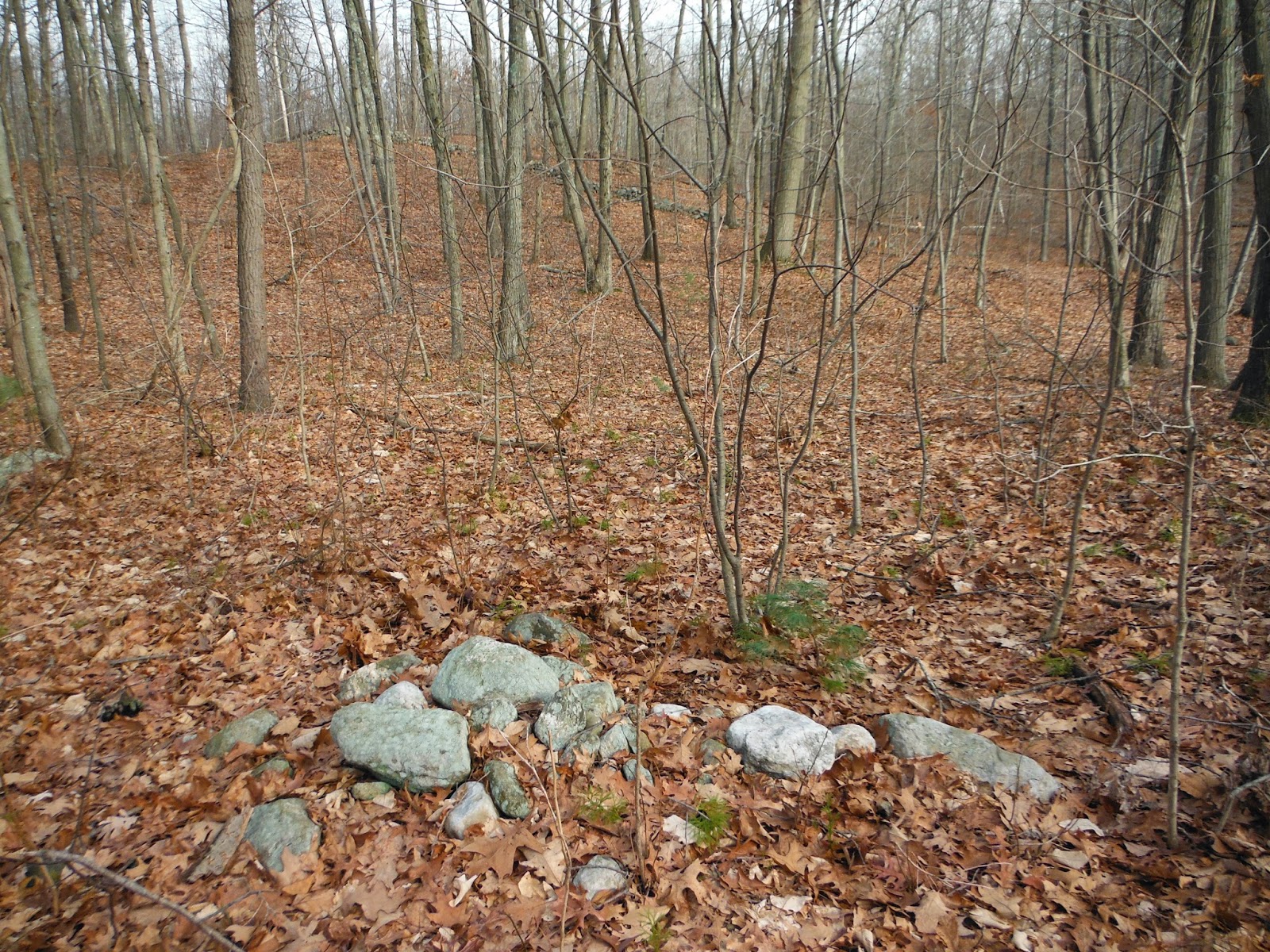 Another shot of that middle one, facing south more or less: 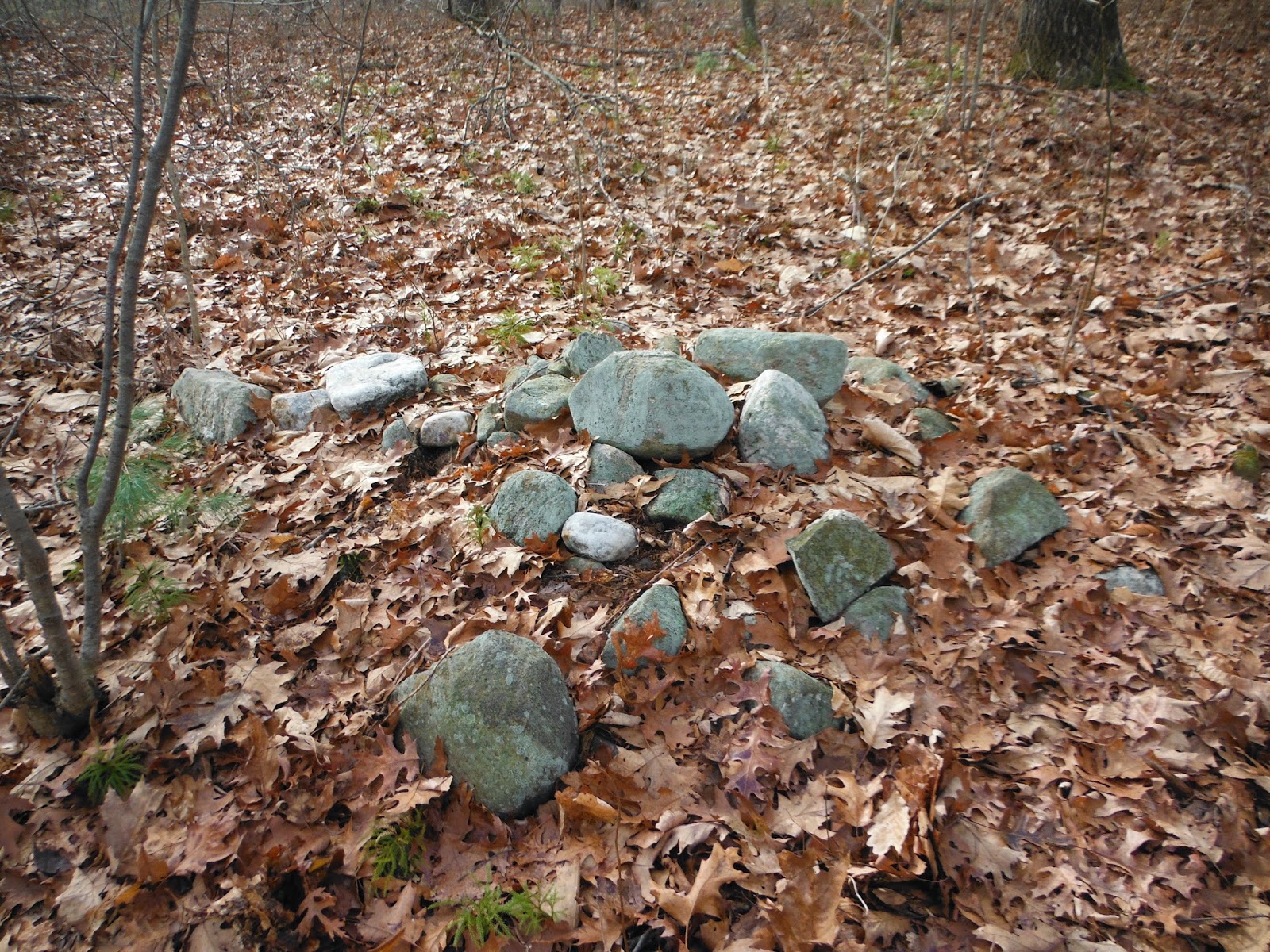 Note the rhomboid on the right (above) and the smaller piles (below), debris covered, heading to the stone row: 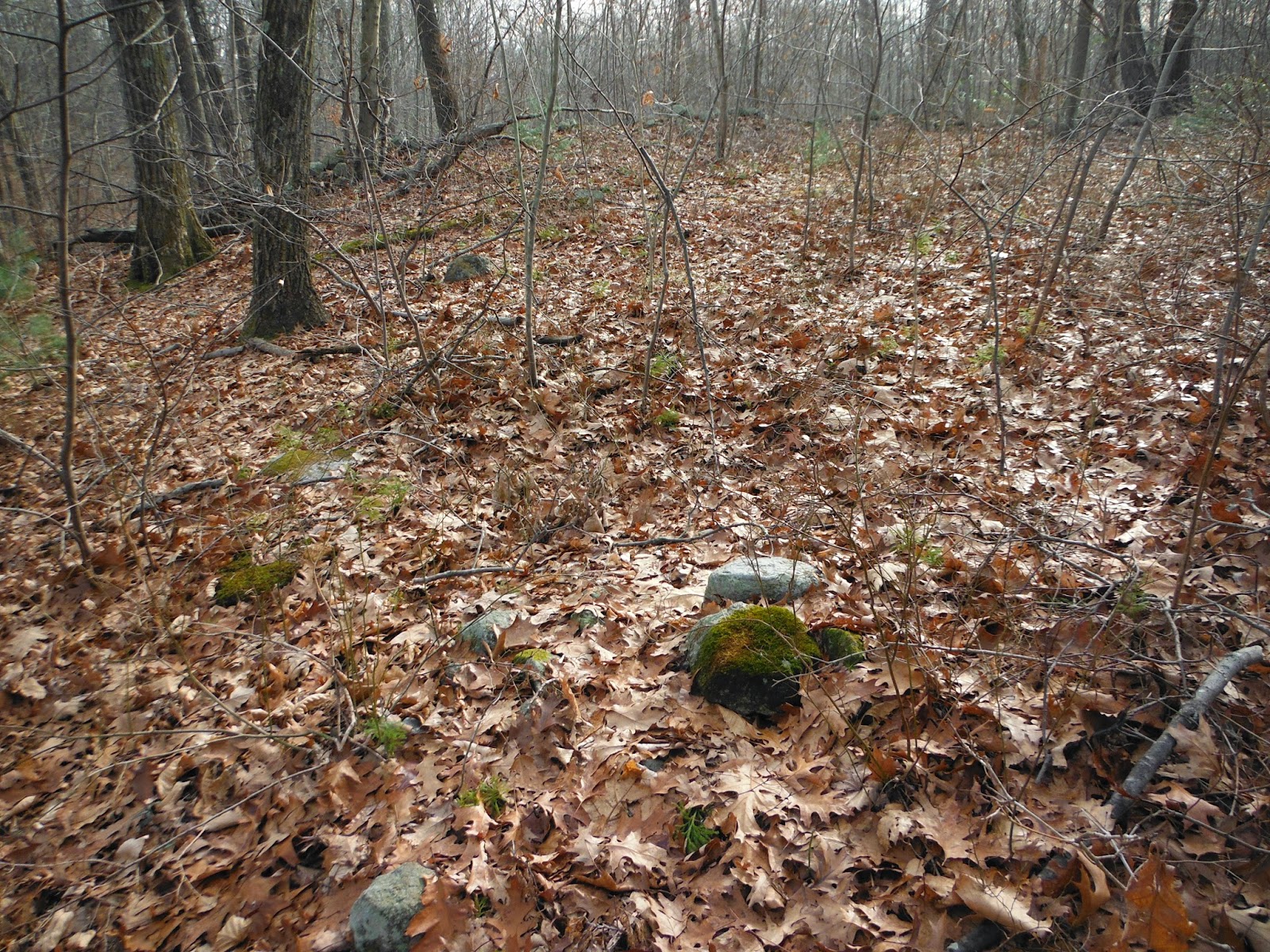 Looking back toward the mound, almost visible through the trees: 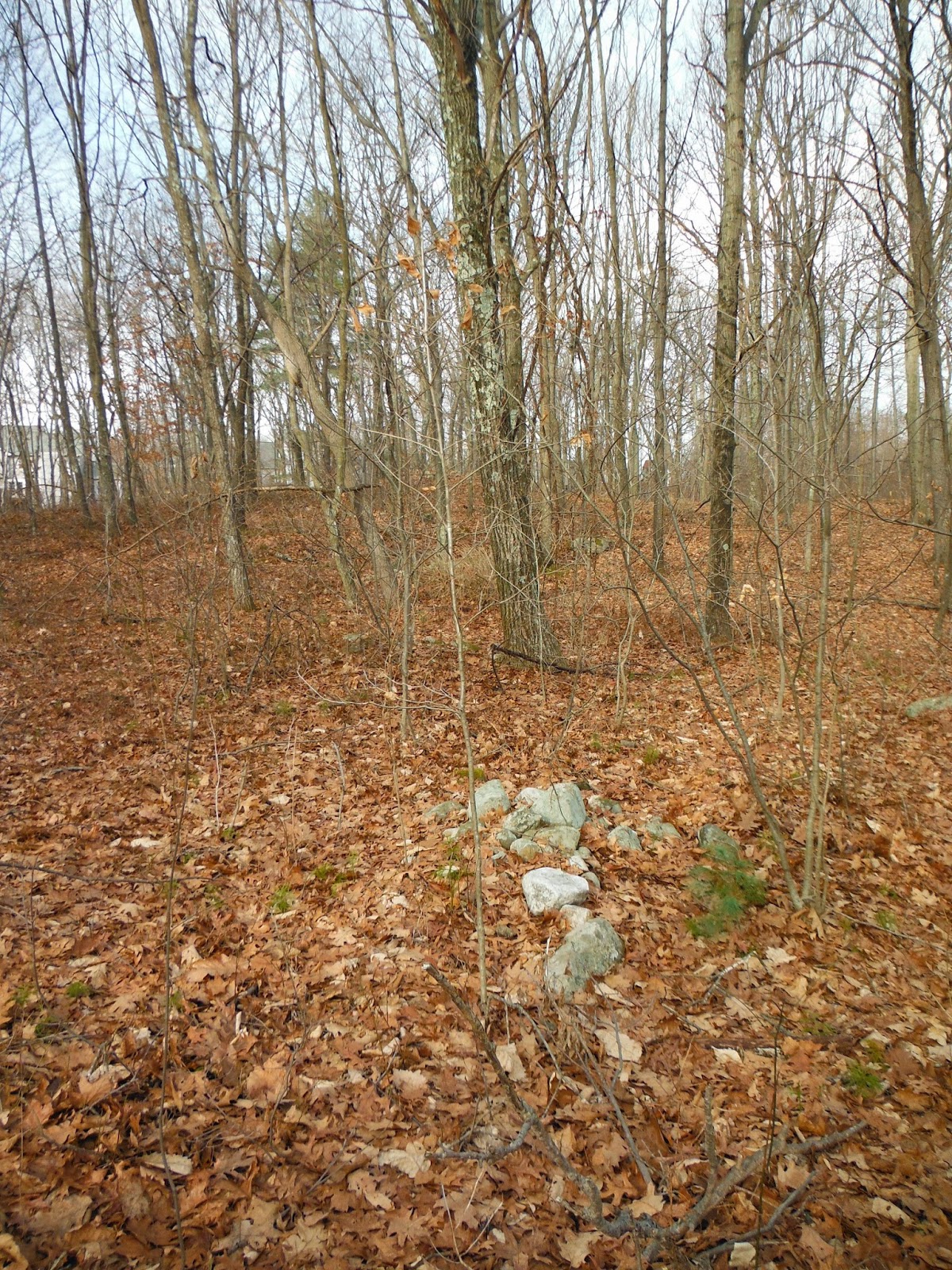 Before these mounds actually came into focus, the first feature of or in the stone row that caught my attention - and that I keep coming back to as I ponder the stone row is this one spot: 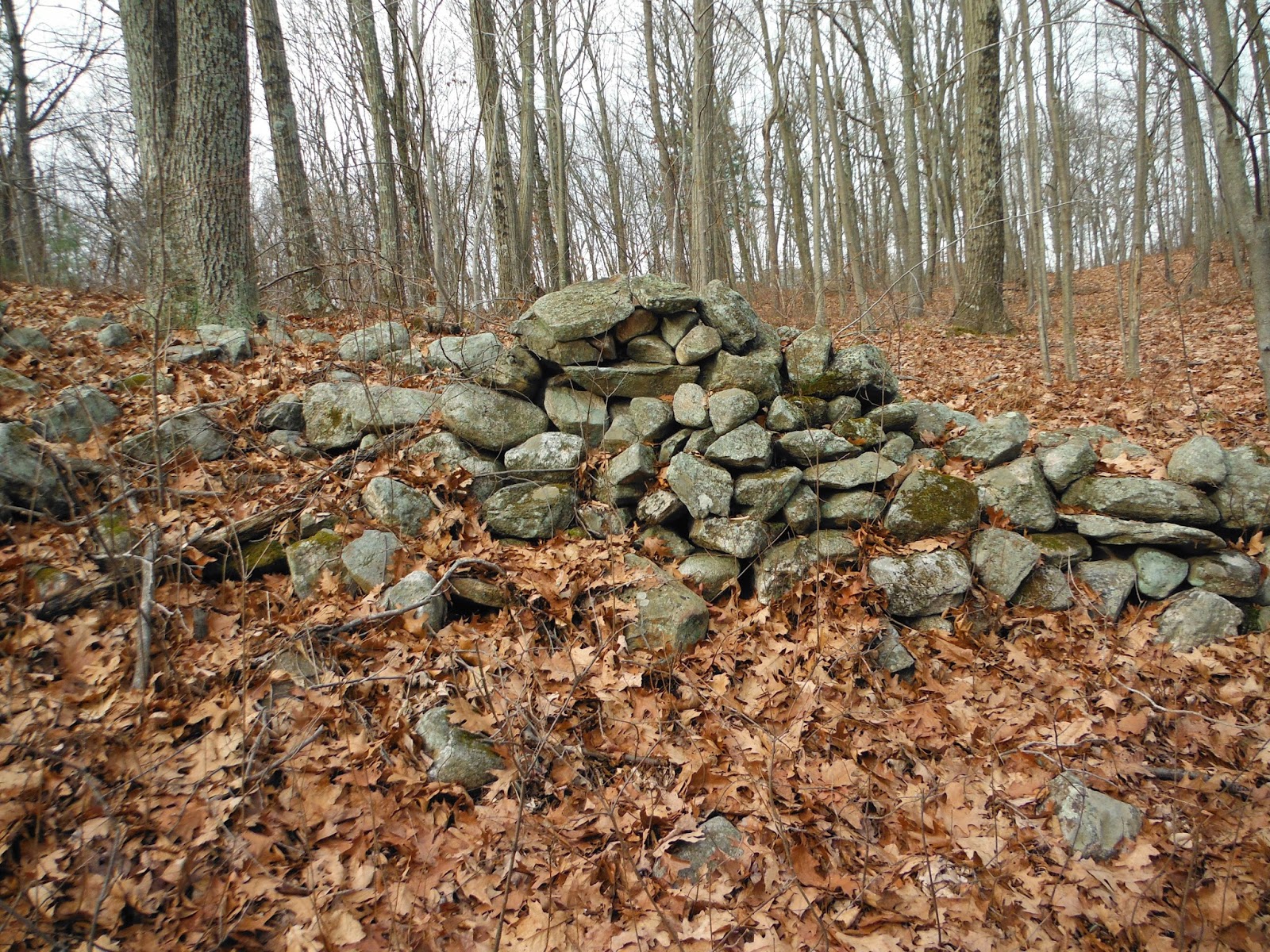 It looks a little fallen apart and I'll probably brush some leaves out of the way next time, but there's a couple stones that look "book matched:" 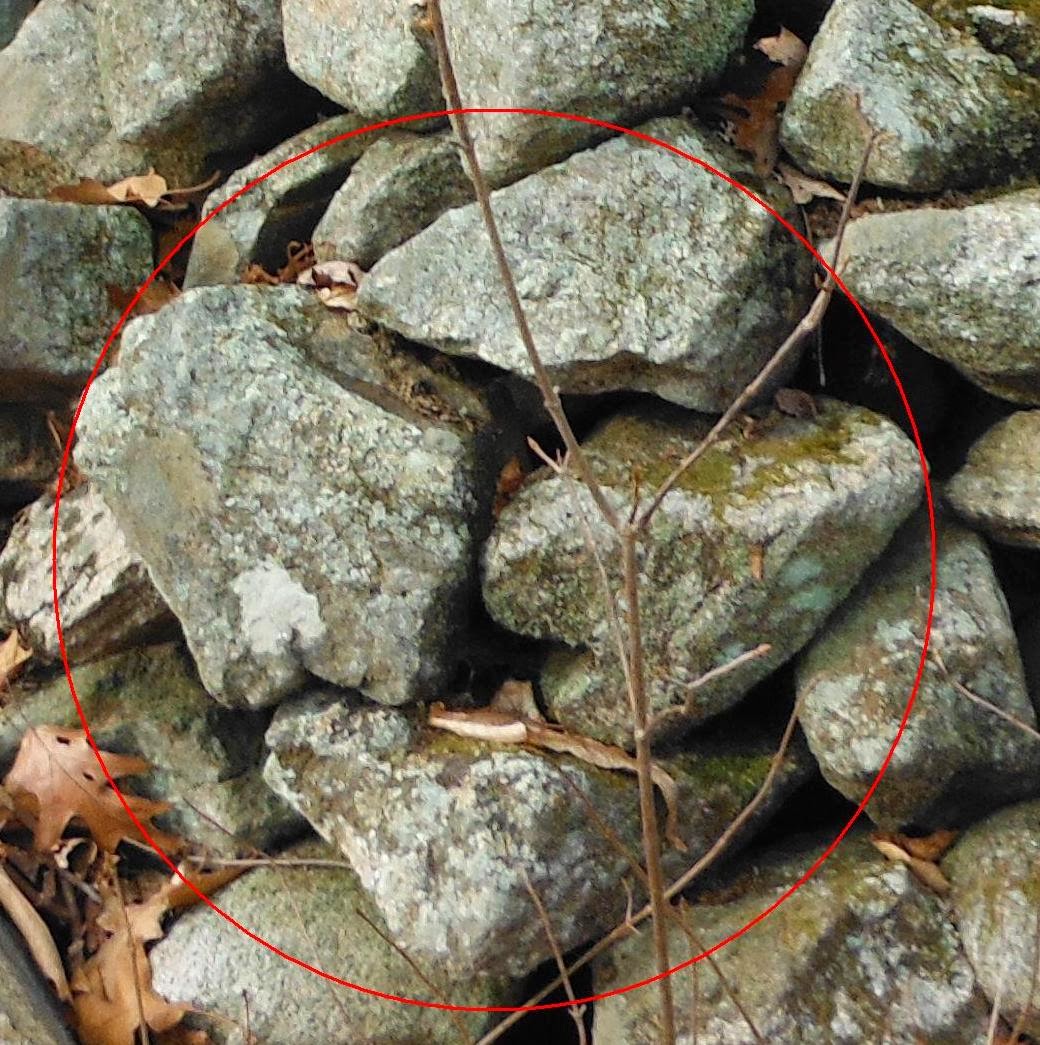 I wondered for a while if this could be two "faces" or something until I thought about that foot or foreleg of that Diamondback Terrapin on that stone row down in Madison CT: 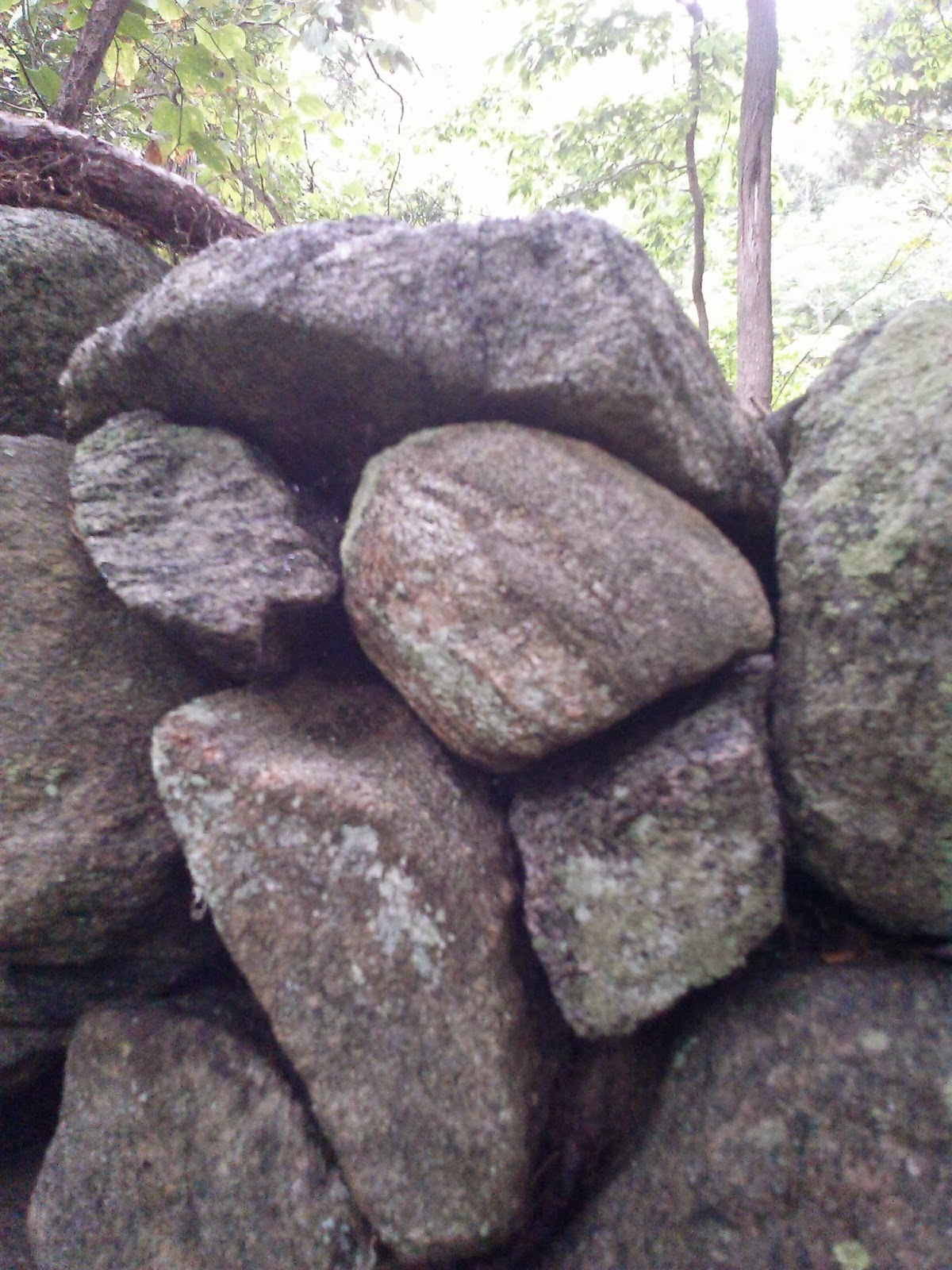 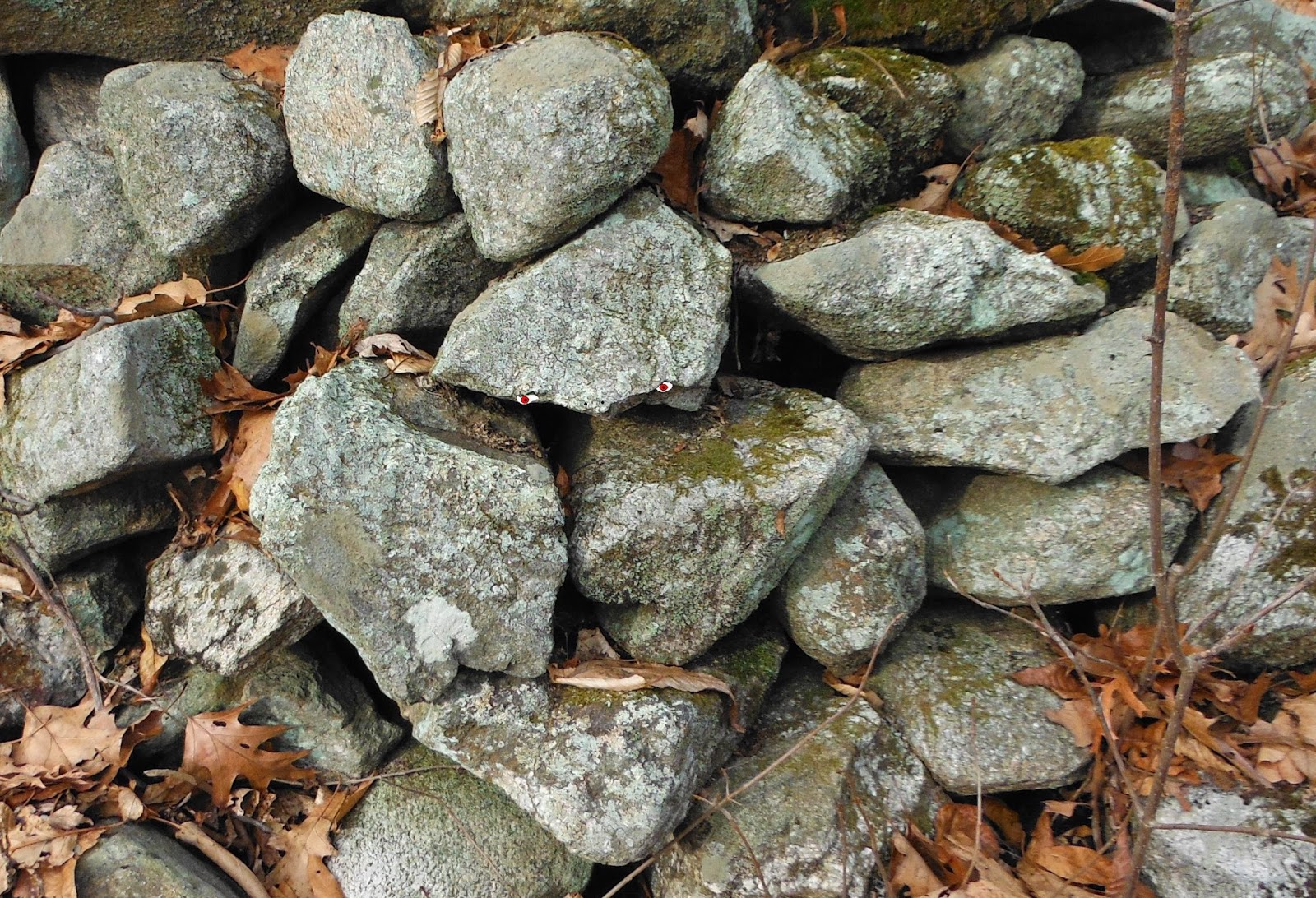 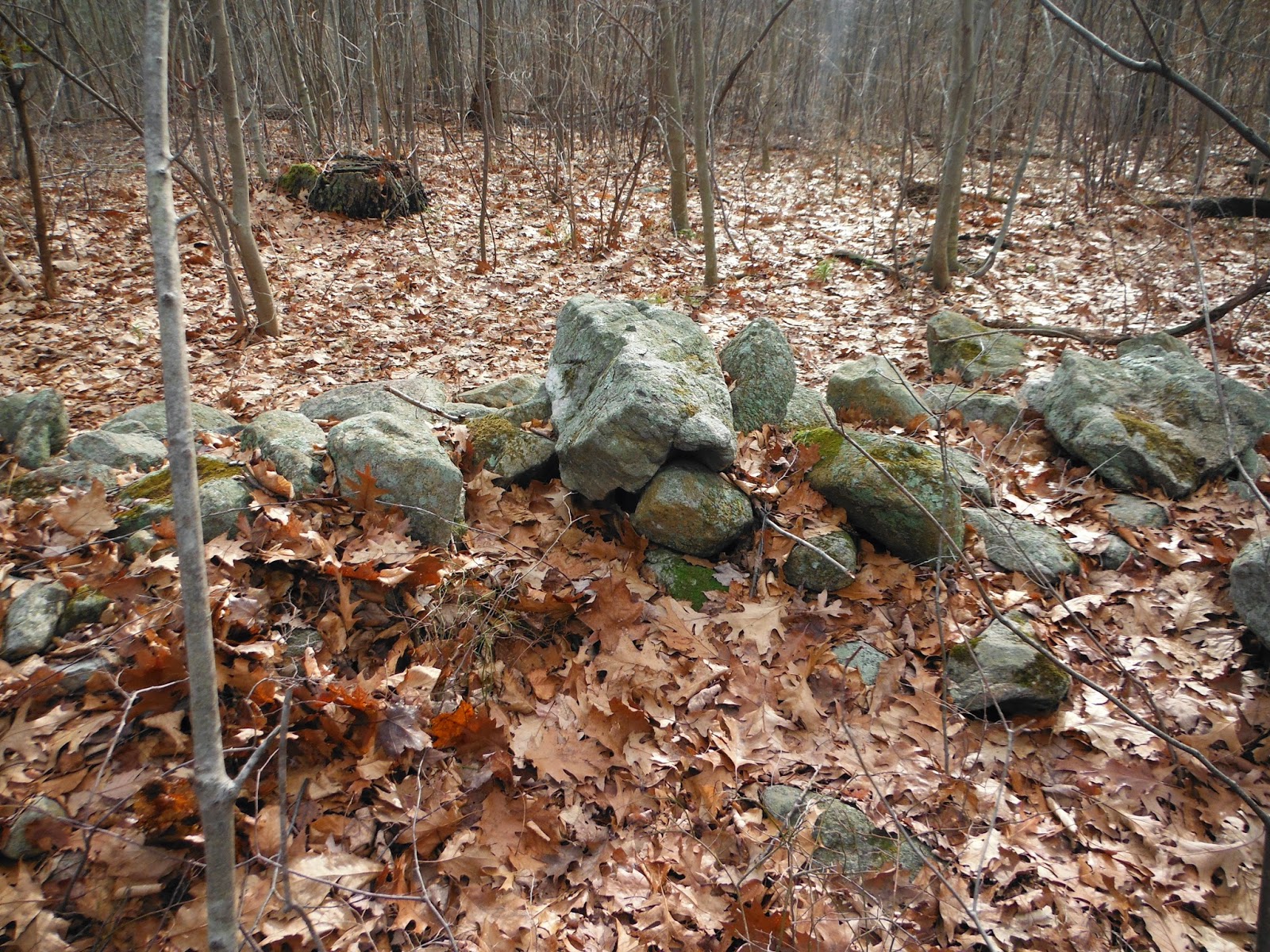 I can't help but think "Testudinate:" 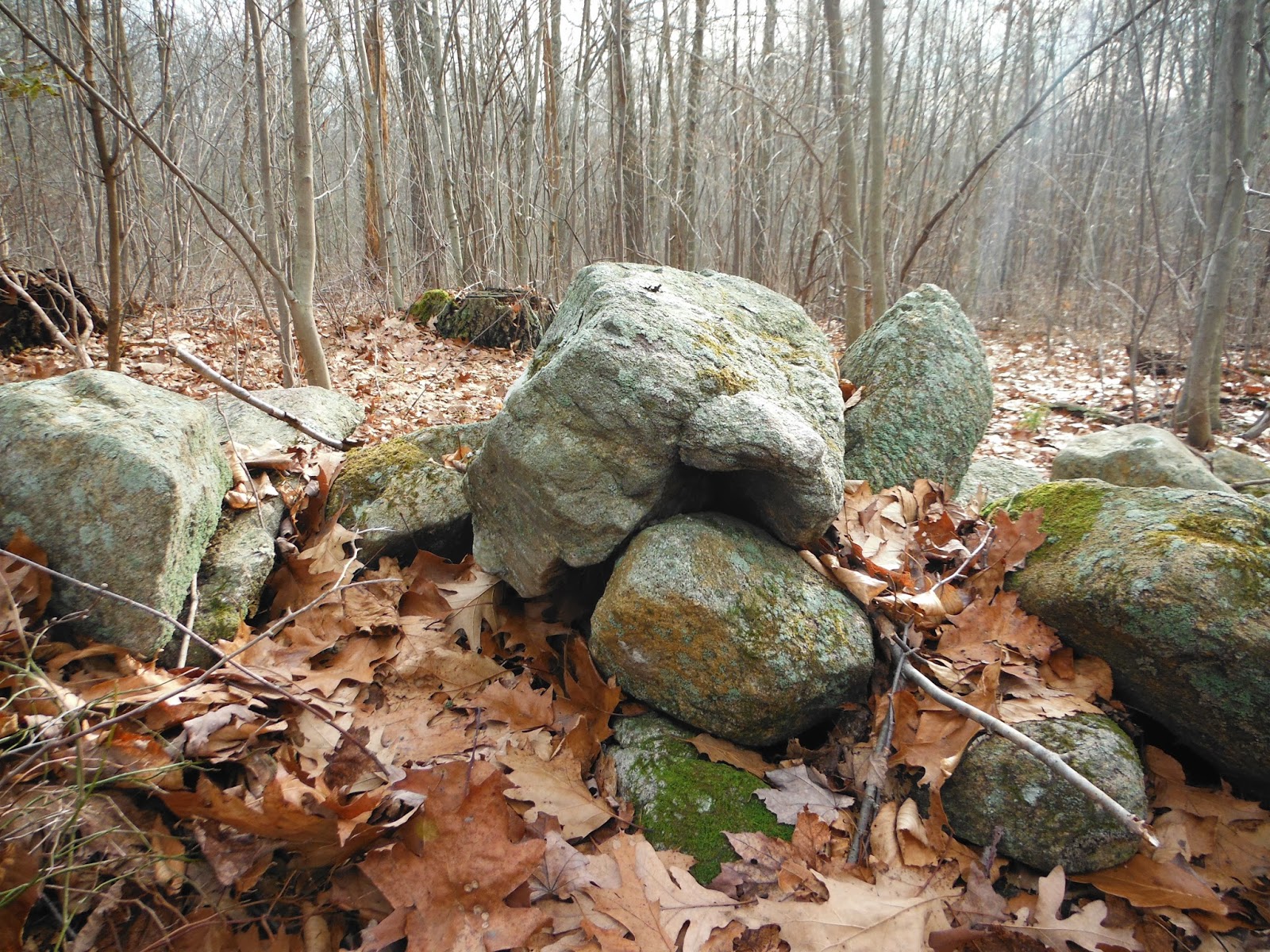 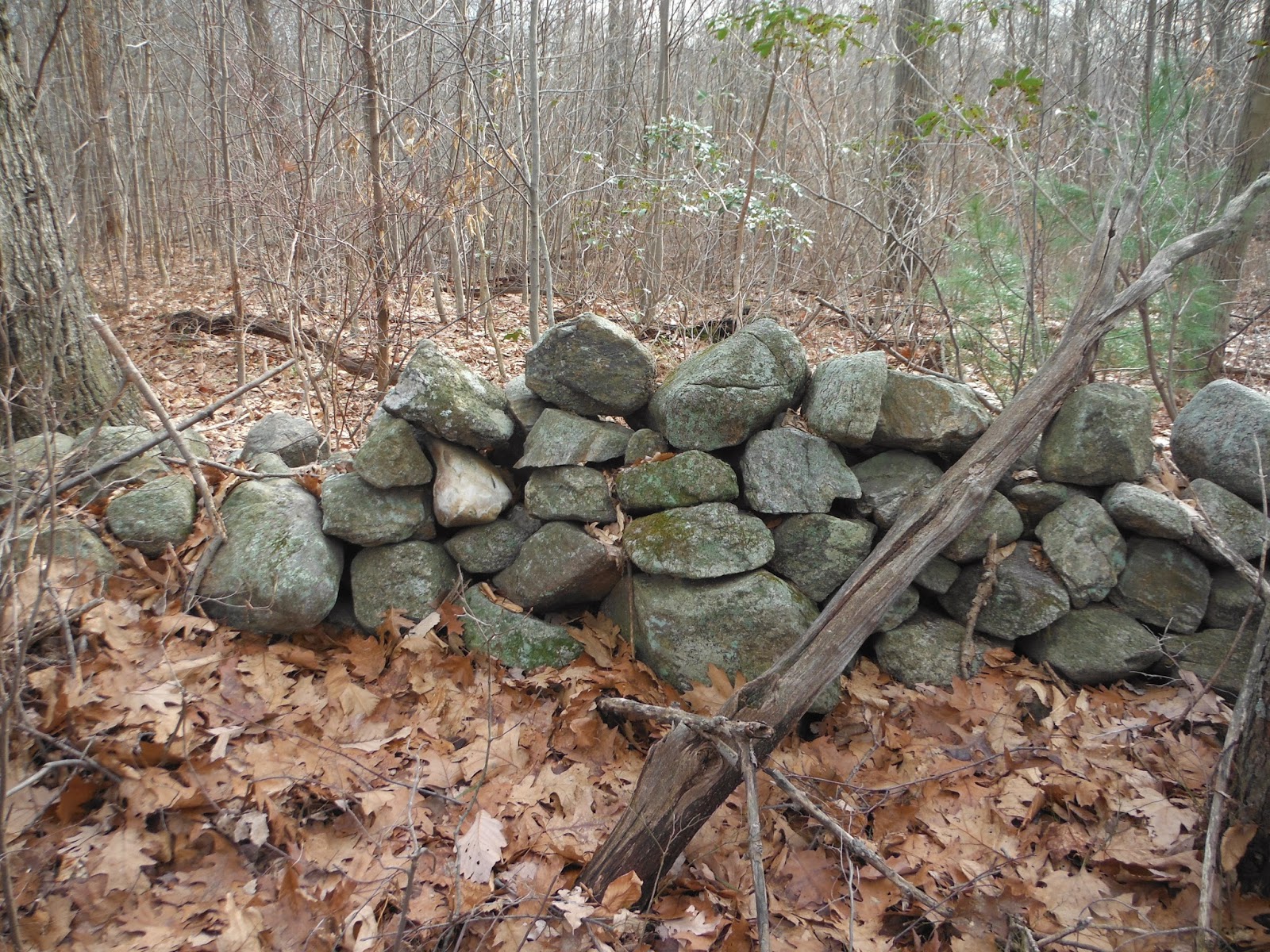 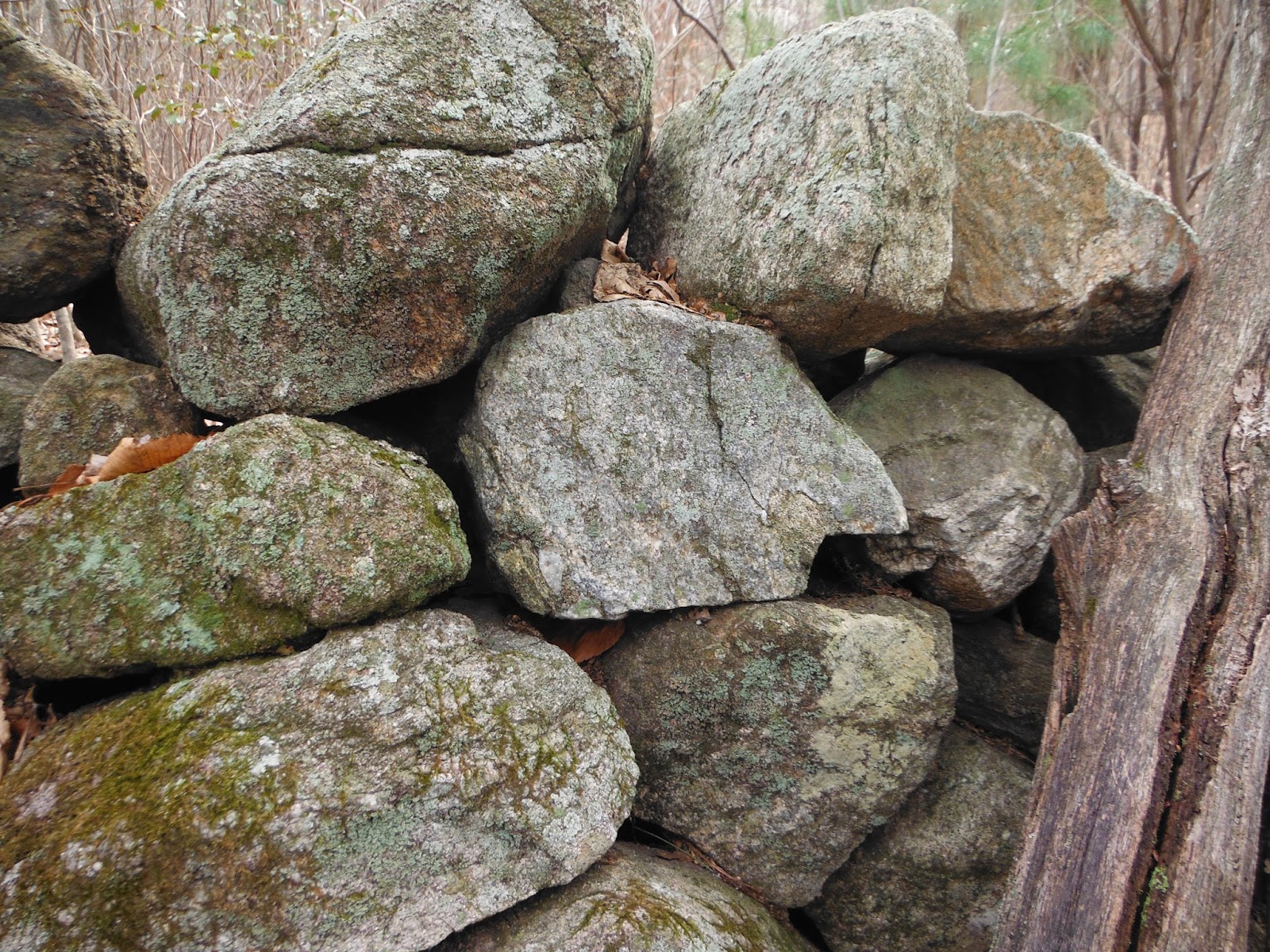 Yesterday's: http://wakinguponturtleisland.blogspot.com/2014/01/bear-with-me.html has this photo of a possible bear in a stone row at the corner of my yard that I immediately thought of: 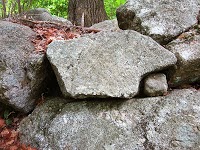 There's quite a bit of quartzite: 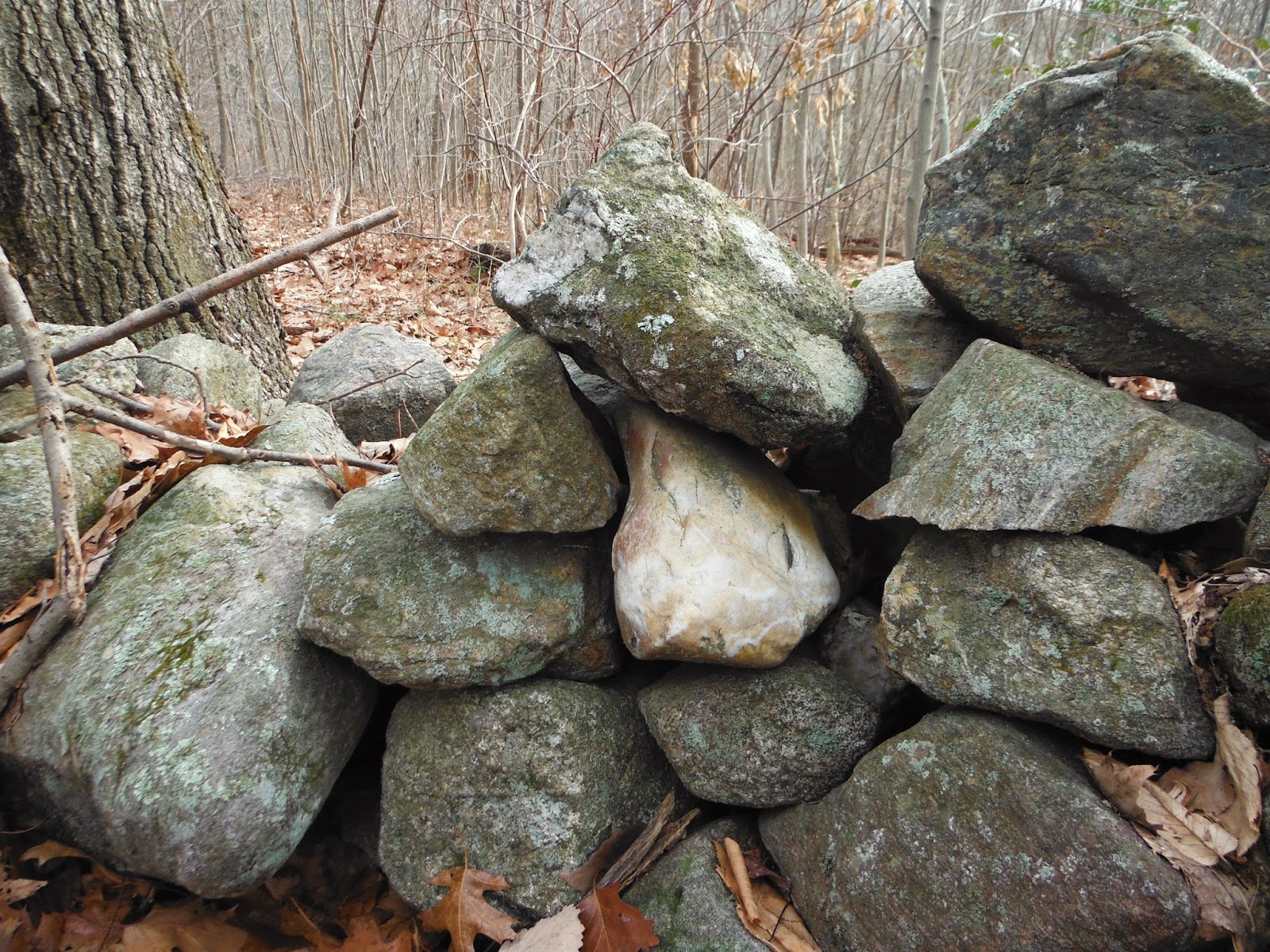 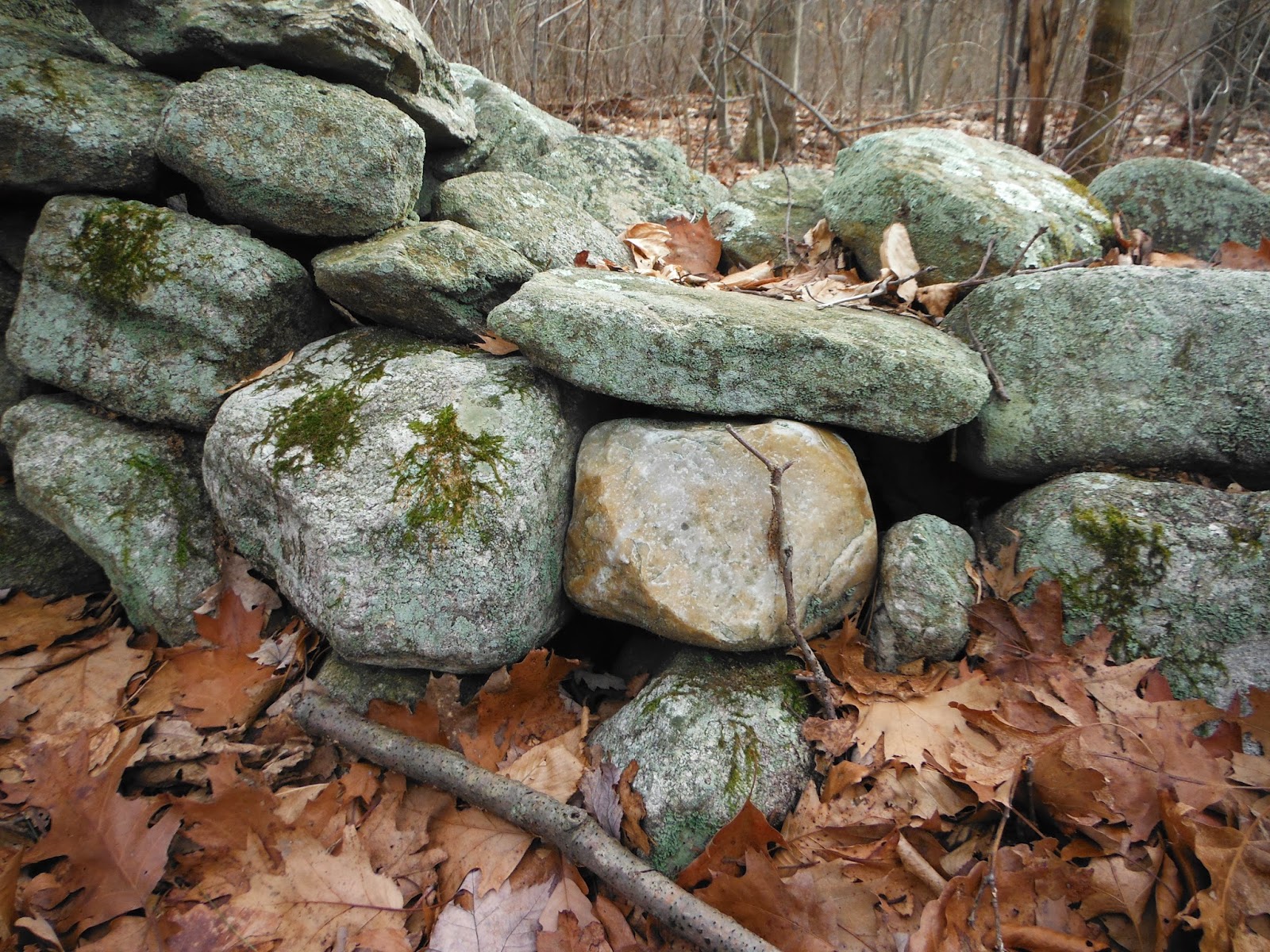 One even sort of propped up in the stone row: 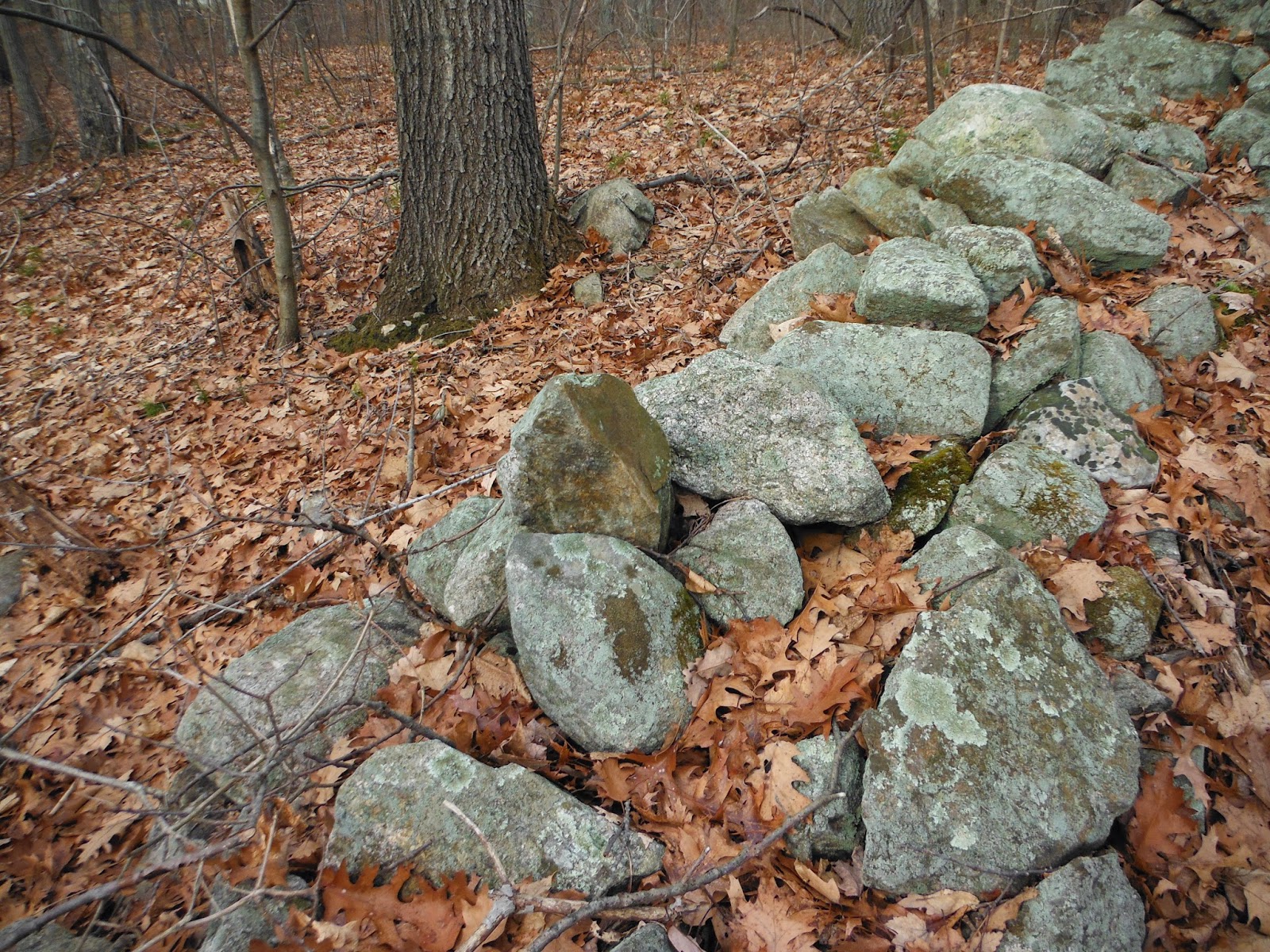 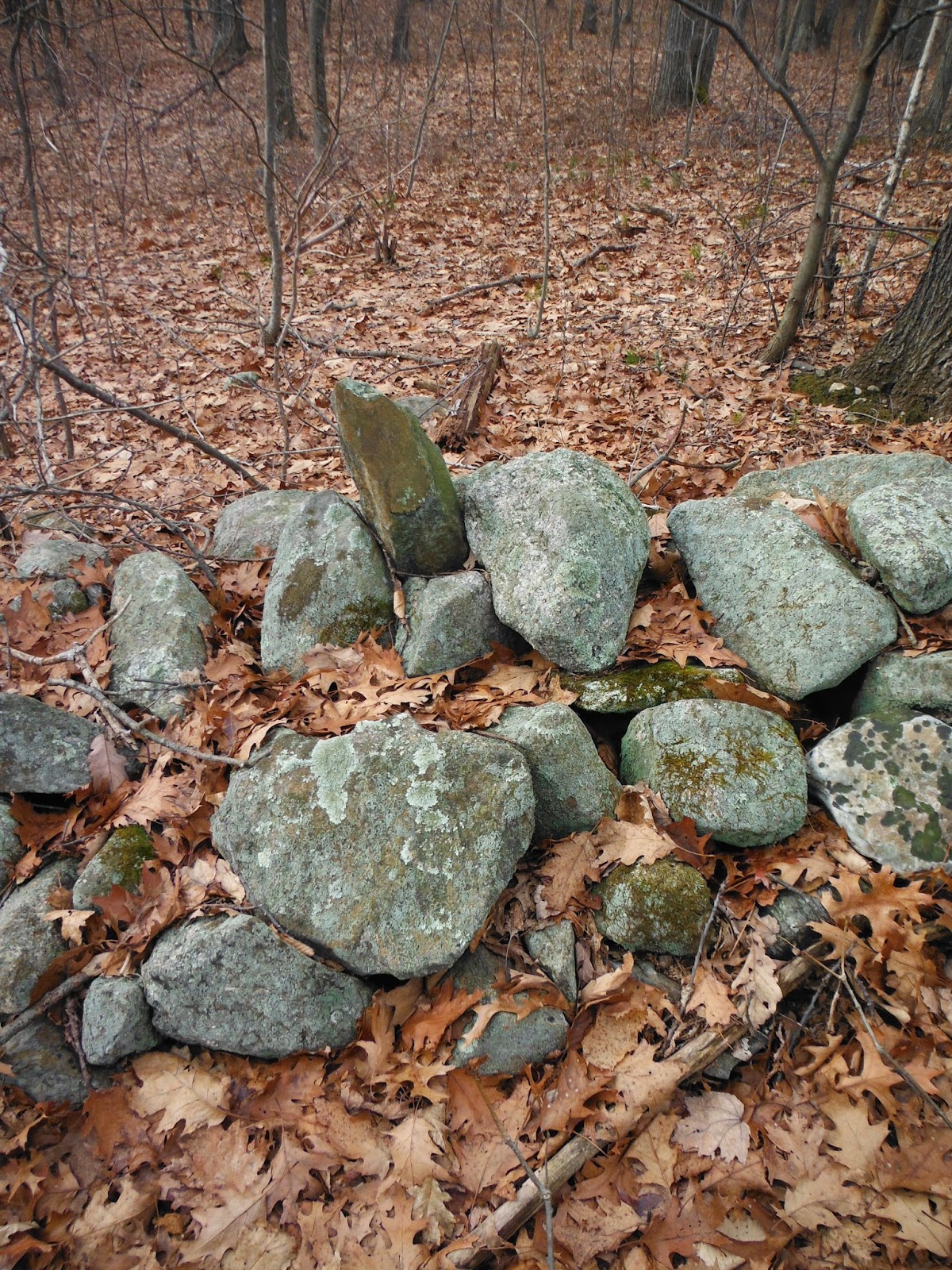 Posted by Tim MacSweeney at 9:37 AM