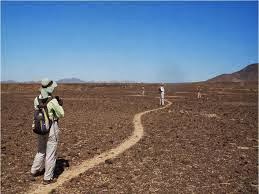 PREHISTORIC TRAILS OF THE PICACHO BASIN IN THE COLORADO DESERT, IMPERIAL COUNTY,CALIFORNIA
By STEPHEN BRYNE
Prehistoric trails are part of the cultural landscape of the Picacho Basin in the Colorado Desert of southeastern California. These trails provide a lasting testament to prehistoric life ways. Since the early twentieth century, scores of trails have been documented in this region. The trails, which vary from short segments to over 200 mi. in length, were used to access resource collections areas, to conduct trade and warfare, and as ritual routes to sacred sites. A number of trails were recorded in 2010 during surveys for proposed military aircraft landing sites. Observations regarding these trails, and their significance, are discussed. 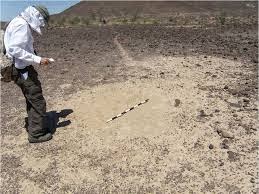 “The entire west was crisscrossed by prehistoric trails. In California, these trails linked all areas: north, south, east, and west (Campbell 1999:42). Not only were local trails utilized, but super-pathways traversed and bisected the region and reached trails far beyond, leading to what would become the adjoining states of Arizona and Nevada (Campbell 1999:42)…”

“Cairns:
Cairns or rock piles in the desert often denote that one is in close proximity to a trail. However, it should be noted that historic cairns are also prevalent in the Colorado Desert due to mining, and care should be taken to distinguish between those cairns which are historic and which are prehistoric (Laylander and Schaeferin draft). Sometimes these cairns contained cremations, others were used as shrines, and others were simply trail markers; however, regardless of their purpose, they are “indications of the eco‐cultural ethic which led Native Americans to pause for a moment and pay respect before setting foot on the trail” (Bean et al. 1978: 7‐14). 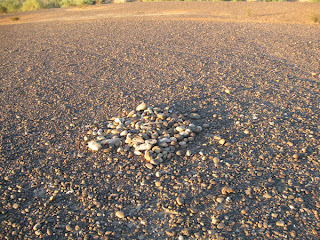 Cairn on desert pavement, not analyzed by the California Energy Commission or Bureau of Land Management.
stolen from: http://www.basinandrangewatch.org/Blythe-Sep.html

"It is well known that Native American ethnographic landscapes can encompass relatively large geographic expanses (Hardesty 2000; Parker and King 1992). Sacred mountains, such as Mt. Shasta in California, San Francisco Peak in Arizona, and Devils Tower in Wyoming, are examples. What is less widely appreciated is that Native American belief systems often not only refrain from delineating geographic boundaries with respect to specific revered landforms, such as mountains, but also insist on a critical interconnection among what might otherwise be considered separate landscapes..."http://www.clemson.edu/cedp/cudp/pubs/alliance/04_cleland.pdf
Posted by Tim MacSweeney at 7:09 AM