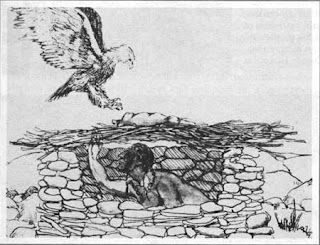 (I don't know why the text below that accompanies this drawing doesn't read: "It was common for Indians to seek high country locations, conceal themselves in a brush covered stone-lined pit structure, or as the drawing shows, a free standing brush covered stone structure...)

"...(U)sing Rocky Mountain National Park's passes and trails to catch enemies by surprise or to find better hunting grounds gave both the Utes and the Arapahos cause to enter this region. Other activities occurring in these mountains were probably less dramatic. One lesser known attraction, that of trapping eagles, may have drawn solitary Indians toward these peaks. It was common for Indians to seek high country locations, conceal themselves in a brush covered pit, and lure eagles toward a hunk of meat placed as bait upon the brush. Ethnologist Alfred Kroeber explained: "Only certain men could hunt the eagle. For four days they abstained from food and water. They put medicine on their hands. In four days they might get fifty or a hundred eagles. A stuffed coyote-skin was sometimes set near the bait." [14] Whether the summit of Longs Peak was actually used as an eagle trap, as later Arapaho informants claimed, cannot be verified. The first recorded climbers found no evidence of any pit or other traces of human activity when they arrived at the top of Longs Peak in 1868. Yet other mountains or high country ridges might well have been used for snaring eagles, creatures considered so valuable because of their decorative feathers..." 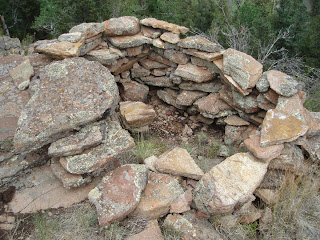 Stone structure thought to be an
eagle-trap, viewed from above.
(photo by Becky Donlan)
{http://slvarchaeo.net/slvarchnet/IMAGES/Optimized%20images/MusickLodge/eagle_trapLarge.jpg}

I found the photos at http://slvarchaeo.net/musickLodge.html, a website about Musick Lodge, a wicki-up - as W.C. Fields would say, where the "... rare and unique wooden structure was reported to the Rio Grande National Forest archaeologists in 2008 by local resident, Mike Musick. The Musick Lodge (5SH3788) was offically recorded this past summer (2009) by teams of archaeologist and volunteers from the Rio Grande National Forest (RGNF). Pike/San Isabel National Forest (P/SINF), and the Dominguez Anthropological Research Group (DARG)." 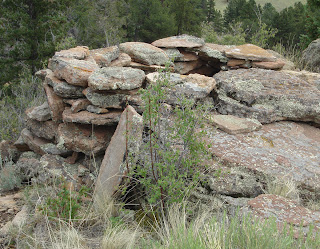 Another view of possible eagle-trap, note the incorporation of the large boulder in the foreground into the wall.(photo by Becky Donlan)

Here's another, in Wyoming, possibly for "Not-Very-Tall People:" 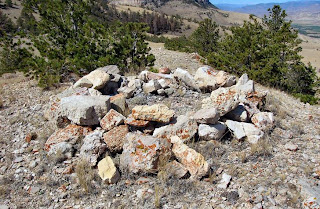 I am unsure how it differs from this Vision Quest Site: 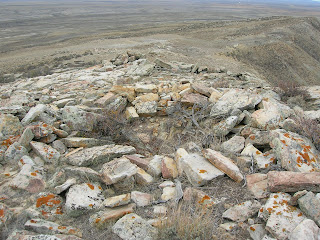 Only the people at http://www.mettlerassociates.com/Previous-Projects.html know for sure at this point.


There are multiple views of a pit style eagle-trap in a series of fine photos by Mr. Stephen T. Shankland starting here:  http://www.flickr.com/photos/shankrad/5349702822/in/photostream/
This is the thumbnail of two traps side by side from the image search below, and the other photos by Mr. Shankland are really great, some friends of his giving perspective to the photos from New Mexico: 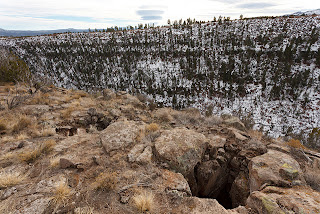 "Eagle Trap Nos. 2 and 3; A hike along Burnt Mesa to the three eagle traps on the edge of Frijoles Canyon."

Posted by Tim MacSweeney at 7:39 AM