Shasta; Stone Rows as Bones of the Ancient Cultural Landscape 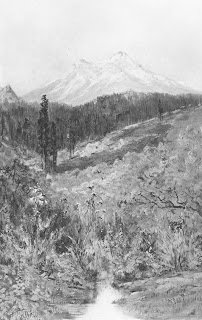 The Three Zones of Shasta; Photogravure after painting by Thomas Hill
http://www.siskiyous.edu/shasta/lit/mui/jmuir14.htm
Seeing recent photos from around Mt. Shasta, I look at all those stone rows as the Bones of the Sacred Ancient Cultural Landscape. Images like these fuel my imagination, just as much as any study or ethnology from Northern California does, including the highlights from "American Indian cultural models for sustaining biodiversity," written from a Native American perspective. 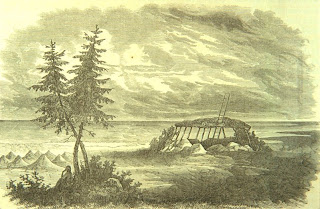 
We’re going to have to reorder the way we look at the world a little bit. If we as scientists view preserving wilderness or biodiversity as worthy of study only when the area has no native or any other peoples, then I think we’re dangerously on the wrong track. If you take the native peoples out of their
own habitat—the forest, the desert, the tundra or wherever—I think 9 times out of 10, the ecosystems start to unravel. This instability comes about because people have learned, as native people did here in North America for eons of time, to live in a relationship culturally and spiritually with the plants and animals in the natural world...People who lived in a place for generations—tens to hundreds of thousands of years—needed to have their act together in order to survive. They needed to know how to use the land, and how to use the land sustainably. This is not a function of just one population in any one generation...When the forest is clearcut...memory the place is unrecognizable. If the old people were to come back now to any forest system in the Pacific Northwest, they wouldn’t recognize it, it’s so completely different. That’s what a lot of people call “natural.” It really is a gigantic experiment in secondary succession, the end result of which is unknown. 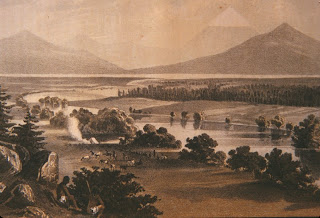 When I say “management,” that does not exclude the spiritual part...Every place around here was well known, etched in memory since childhood. We knew the territorial boundaries by heart. We knew
everything about our neighborhood, and we knew all the songs for the trails and the springs. 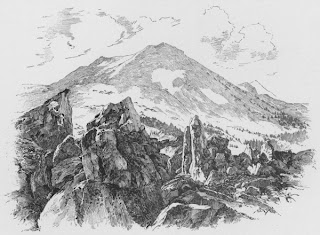 ...it’s like after Hiroshima or Nagasaki. It’s gone, the neighborhood, the memory the place is unrecognizable. If the old people were to come back now to any forest system...they wouldn’t recognize it, it’s so completely different. That’s what a lot of people call “natural.” It really is a gigantic experiment in secondary succession, the end result of which is unknown. 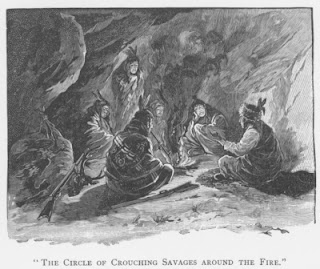 If the elders were to come back now from the spirit world, they would look around and say, “There’s nobody taking care of this place.”

Images, and there are lots more, from: Mount Shasta; Chapter 10 of Picturesque California, 1888, as well as text written by (Someone's Uncle) John Muir: http://www.siskiyous.edu/shasta/lit/mui/jmuir14.htm]
Posted by Tim MacSweeney at 11:16 PM