"If the scientific explanation is too hard to understand, make up a deceptively simple fable."

There is a New England myth that Native American People made no “stone walls,” until after 1620. All stone walls, which are really stone fences, which are really very long rock piles, are solely the hard work of European colonists and successive waves of immigrants, as the legend goes. In this floodplain valley where I’ve lived for over thirty years, the date can be moved up to 1672-3 when a group of English speaking people following Indian trails from a settlement at the mouth of the Housatonic River bumped into the Native American inhabited ________ Wigwams, as our local folklore says. That folklore also says that there were cleared fields and open forests, “the most beautiful of lands seen so far” according to a New Milford CT local history, managed by Indian fires which made it easy for the new settlers to travel and to plant crops the first year of their removal, “quite to” this floodplain “intervale.”

This story about Indian fires is quite commonly repeated in early histories. The stonewall story goes right along with it.

Nobody knows the exact number of stone walls, the stone wall fable goes, but estimates stretch to about twenty thousand miles in Connecticut alone, enough to almost go around the Earths Equator. The fable says things like “it would have taken 1,000 men working 365 days a year about 59 years to build all the stone walls in Connecticut.”

Well, nobody knows how many Native American People lived in what became known as New England, but the earliest of European visitors say it was a very crowded place. And there was always something burning.

The Indians were vey successful at creating a human made landscape in North, Central and South America, the most current research is beginning to realize, for a very long time . 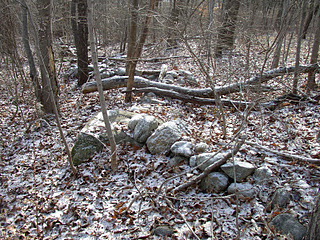 When I look around where I live, I see miles and miles of zigzag stone rows. Aerial photography of the state from a 1934 survey allows me to see many more that are no longer there. I’ve done my best but I can’t find a single zigzag “stone wall” that meets the criteria for how these walls or fences are supposed to be made according to the legendary zigzag stone wall fable. These walls are supposed to be remnants of a process in which stones are thrown up against a wooden rail fence over a long period of time (much to the relief of those poor guys who had to work around the clock building those stone walls no matter the weather, I would imagine). The stone zigzags I see are carefully constructed. They occur in many other places than at the edge of fields. These rows of stone, zigzag and otherwise, only began to make sense to me as firebreaks when I first read William Cronan’s Changes in the Land as well as every other book or article I’ve read since about Indians and their fire management of their environments in the western hemisphere. It is a simple explanation, not really that hard to understand, and if Indians began doing so, perhaps as the culture changed from Paleo-Indian to Early Archaic 10,000 years ago when the stone hearth concept occurred to someone somewhere and someone then applied that concept to the landscape to better their survival (unless it was the other way around), there would be a more reasonably explained time period to build all those miles and miles and miles of “stone walls.”

Call those walls the boundaries or “bounds” that limited the burns, as in the quote:

“The natives are very exact and punctual in the bounds of their lands, belonging to this or that prince or people, even to a river, brook, &c.” - Roger Williams, in his Key (CHAP. XVI. Of the Earth and the Fruits thereof).

Williams defended Indian Land Rights in a further exchange with Puritan leaders by saying, “they hunted all the Countrey over, and for the expedition of their hunting voyages they burnt up all the underwoods in the Countrey, once or twice a year, and therefore as Noble men in England possessed great Parks, and the King, great Forrests in England onely for their game, and no man might lawfully invade their Propriety: So might the Natives challenge the like Propriety of the Countrey here.”

The Puritans replied: “We did not conceive that it is a just Title to so vast a Continent, to make no other improvement of millions of Acres in it, but onely to burne it up for pastime,” as if survival was a kind of recreation.

If Williams did see stone rows as the “bounds” of hunting grounds, or the resource zones of all the “fruits” he lists in his “Key,” as the firebreaks used by Indians as they safely and selectively burned their cultural landscape, he never wrote it down. At about the same time Fence Laws suddenly sprung up – as did those early wooden fences, so easily and quickly built, in fashion said to have possibly originated with Native American Snake Fences, their hunting fences and in one case around their cornfields, as Claude C. Coffin wrote in a 1947 CT Archeological Society Bulletin article about wooden and stone fish weirs along the Housatonic River. What could have been easier that to add the rails over Indian fire breaks and claim the “voyd places of the Countrey by the Law of Nature, (for Vacuum Domicilium cedit occupanti:),” and claim the land for your very own? I said earlier that I’ve never found a zigzag “wall” formed as in the fable, but I find here and there chestnut rails added to these carefully made artistic constructions. 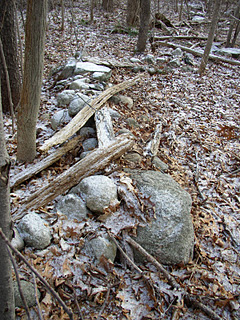 Posted by Tim MacSweeney at 9:55 AM