Here's a few bits I've been meaning to post for a while now, taken from:

"The Huron called themselves the Wendat, a term generally believed to mean "Islanders" or "Dwellers in a Peninsula." This term has been interpreted as referring to the large bodies of water that surround the Huron country on three sides, but it may also reflect the Huron belief that the world was an island supported on the back of a turtle. The term Huron is derived from a French word hure, meaning, literally, a boar, but more generally a ruffian or savage (page 6)." 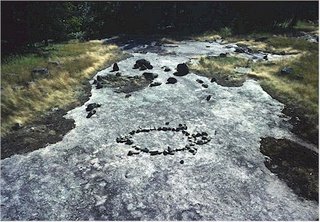 "Various attempts have been made to determine the meaning of the names of the four Huron tribes ...Aherendarrhonon means "The People of the Rocks"; possibly a toponym since this tribe lived nearer...the Canadian shield (page 14)." 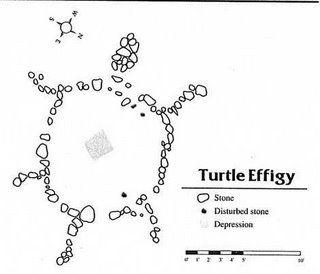 "Charms were highly valued and inhierited from one generation to the next...If a hunter found an animal difficult to kill and later found in its entrails something unusual, such as a stone or a snake, he would keep what he found in the hope it would bring him good fortune. Likewise, stones with a curious shape were kept since it was believed that these stones belonged to a spirit that lived in the woods and had lost them there (33)."


"sobriquets" - or nicknames for people of high status include "Ondakhienhai (big stones, elders, and stay at homes)... applied to chiefs in the historic period (38)."

"Certain large rocks were believed to be the homes of spirits. Some were located along the trade routes.. as travelers passed by these rocks they made offerings of tobacco to them.this was done by throwing tobacco into the campfire or the river or else leaving them in clefts in the rock...(91)."

The bold lettering is my emphasis; the writing style and choice of words is Trigger's...
Posted by Tim MacSweeney at 10:25 AM